Tale of a King: Clash of Kings Road Trip: Part 6a

Part 6a: An army marches on it’s Stomach!

The journey and game 1 at the East Regional at Athena Games, Norwich

Part 6 of my Blog series – Tale of a King: Clash of Kings Road Trip – will be covered over 3-4 sub-parts. Hopefully one a day this week! Main reason being it will take a while to cover all I want, both in me typing and for you reading!

Friday I finished work, packed the car with prize support and event admin and I headed home to continue the painting marathon. I’ll be honest, it was slow going. Even with a fair bit of time Saturday I only got the models to 3 colours but this was the minimum standard required so at least these were fit for use. At about 2030-2100hrs I had the decision to sand the bases or get an early night… as I was driving and up early on the Sunday I decided bed was the best option!

The day started early for me. 5am wake up, left the house at 5.30am and picked up Luke and Dave about 6am. We all squeezed in my Fiesta with figure cases and trays and set off for the East!

Luke was a little nervous about driving through the Fens!

We now had 120 odd miles to cover over mainly single lane A road to get to Norwich. The roads were quiet (a little too quiet for Luke) so we made good time. We had a little breakfast break about half way to Norwich but it was clear that the late night painting and early start for some had taken it’s toll: 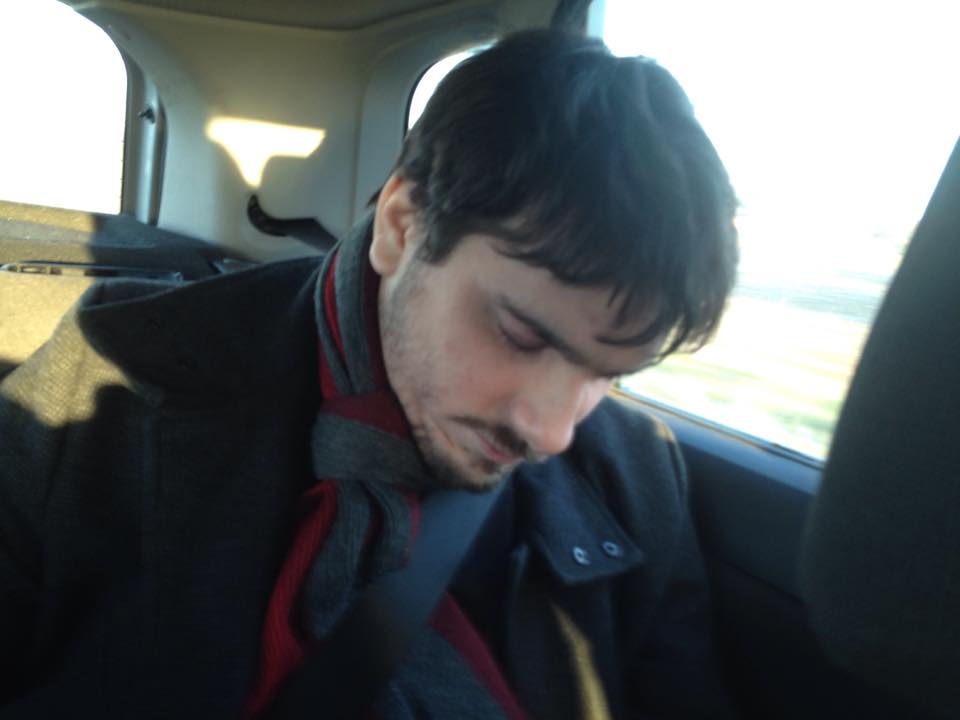 If anyone asks – he was “writing army lists”!!

All in all it was a pretty good trip and we made good time arriving in Norwich just before Event registration.

Athena Games (www.athenagames.co.uk) have just moved to a new premises and once it’s done up will be a fantastic Gaming Venue in the East of England. The new building has 3 halls over 3 floors with plenty of space for gamers. We were down in the bottom ‘small’ room and the first floor was playing host to a Pokemon Event. 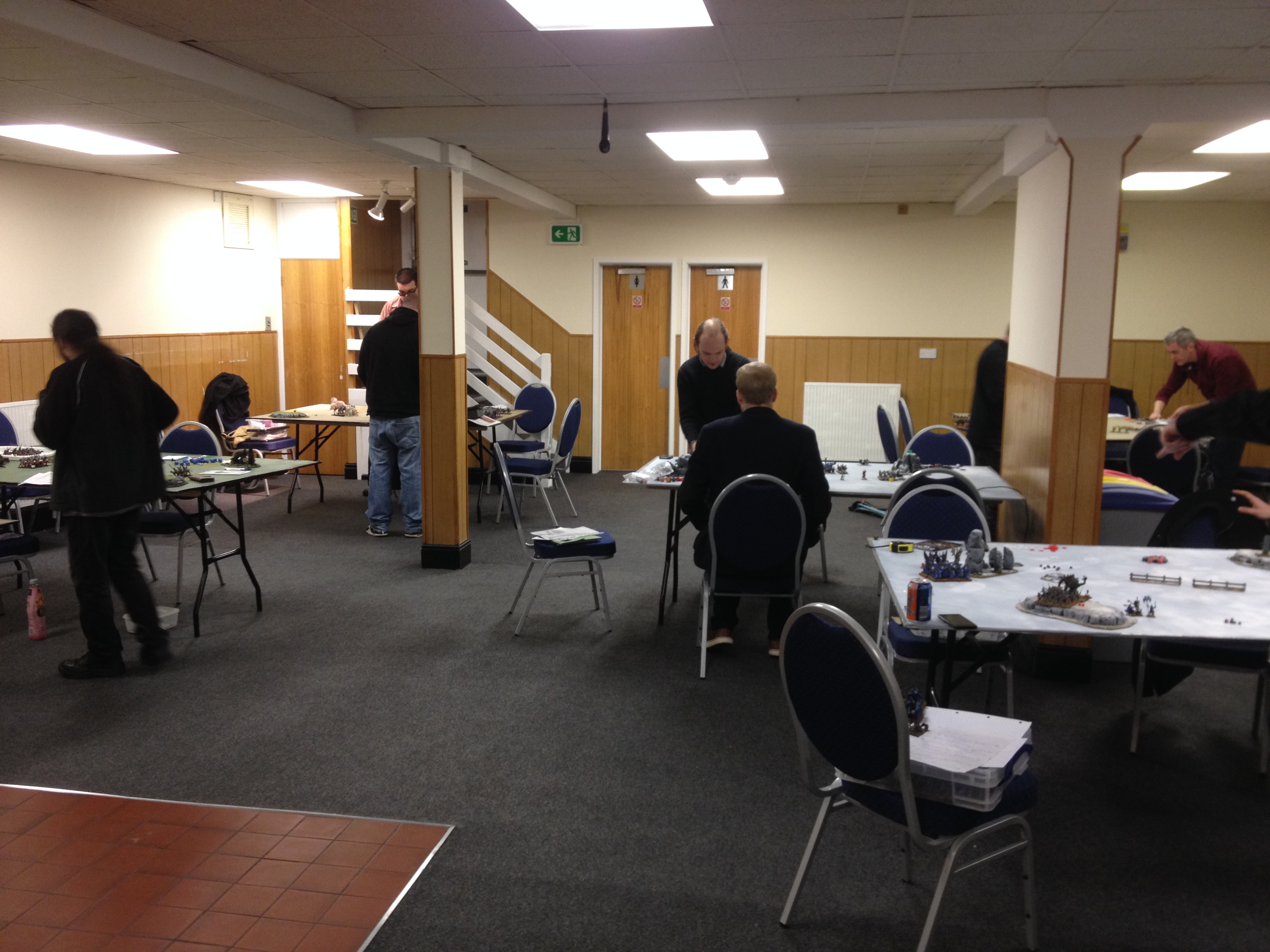 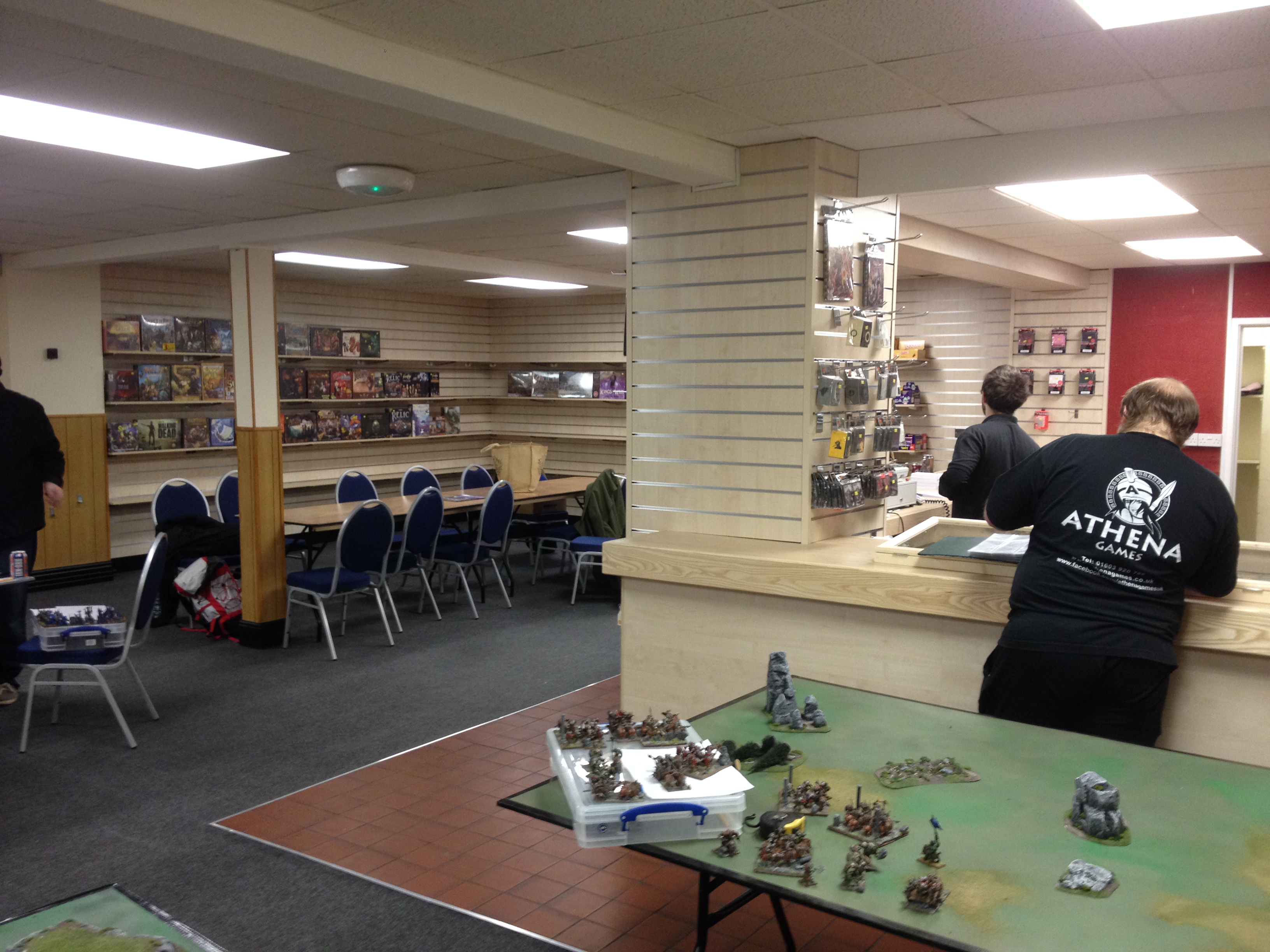 At Registration we had 1 drop out meaning Luke would play to keep the numbers even. We had a total of 10 Gamers including Leon the local Pathfinder and the 3 of us. A lot of the locals were new to the game, only having had a few practice games and some borrowing armies. But I think that is testament to how easy Kings of War is to learn and how accessible the events are that you can pretty much you use any kind of model to play with.

At Registration every player was given a little Goody bag that included amongst other things a mini Kings of War Rulebook, Player Pack with score sheet and a unit of Ogre Shooters!

I started the Event brief and welcomed all the gamers, quickly covered the usual bits of info and then did the first round draw having each player draw a coloured dice out of a box. Each Dice was paired with a matching colour. Once the first round pairings were determined we kicked off!

I found with the Chess Clocks it was a little difficult to take notes but my opponents were all happy to let me pause the clock after each turn and take lots of pics to remind myself later what actually happened. A big thanks to all of them for letting me record the games!

Tim King’s Holier than Thou!

Bearer of the Holy Icon on a Barded Horse

Game 1 was ‘KILL!’ so nice and simple to start off with! Simply put at the end of the game we add up the value of enemy troops routed and if one player does more than 160pts more than the other they win. If the difference is less than 160 (10%) the game would be a draw.

After greeting each other, exchanging lists, discussing terrain and rolling off for table sides we started to deploy. Rob won the roll and decided to set up the first unit. It ended up looking a little like this: 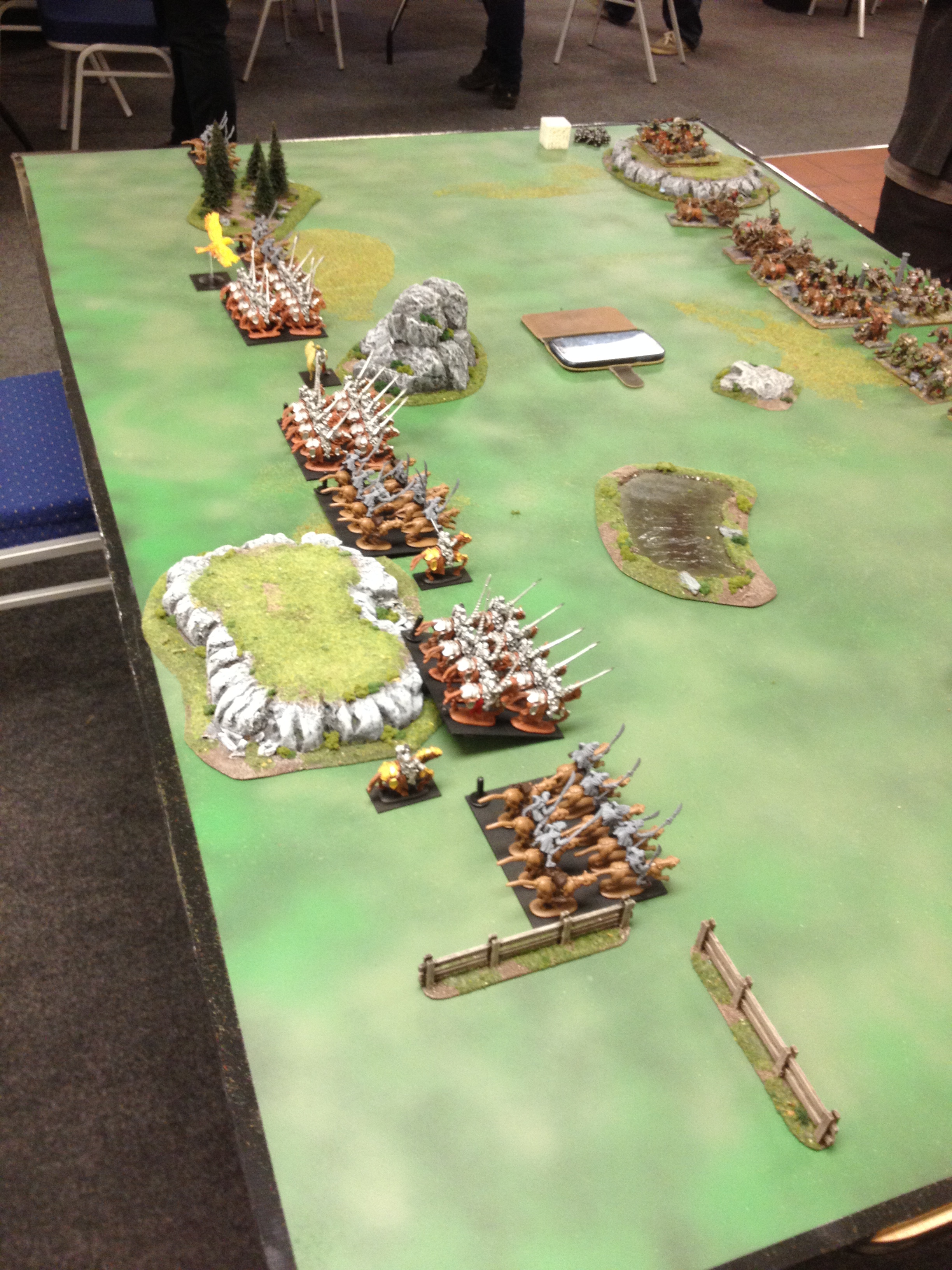 The Basileans deployed right on the 12″ line ready to thunder across the board! 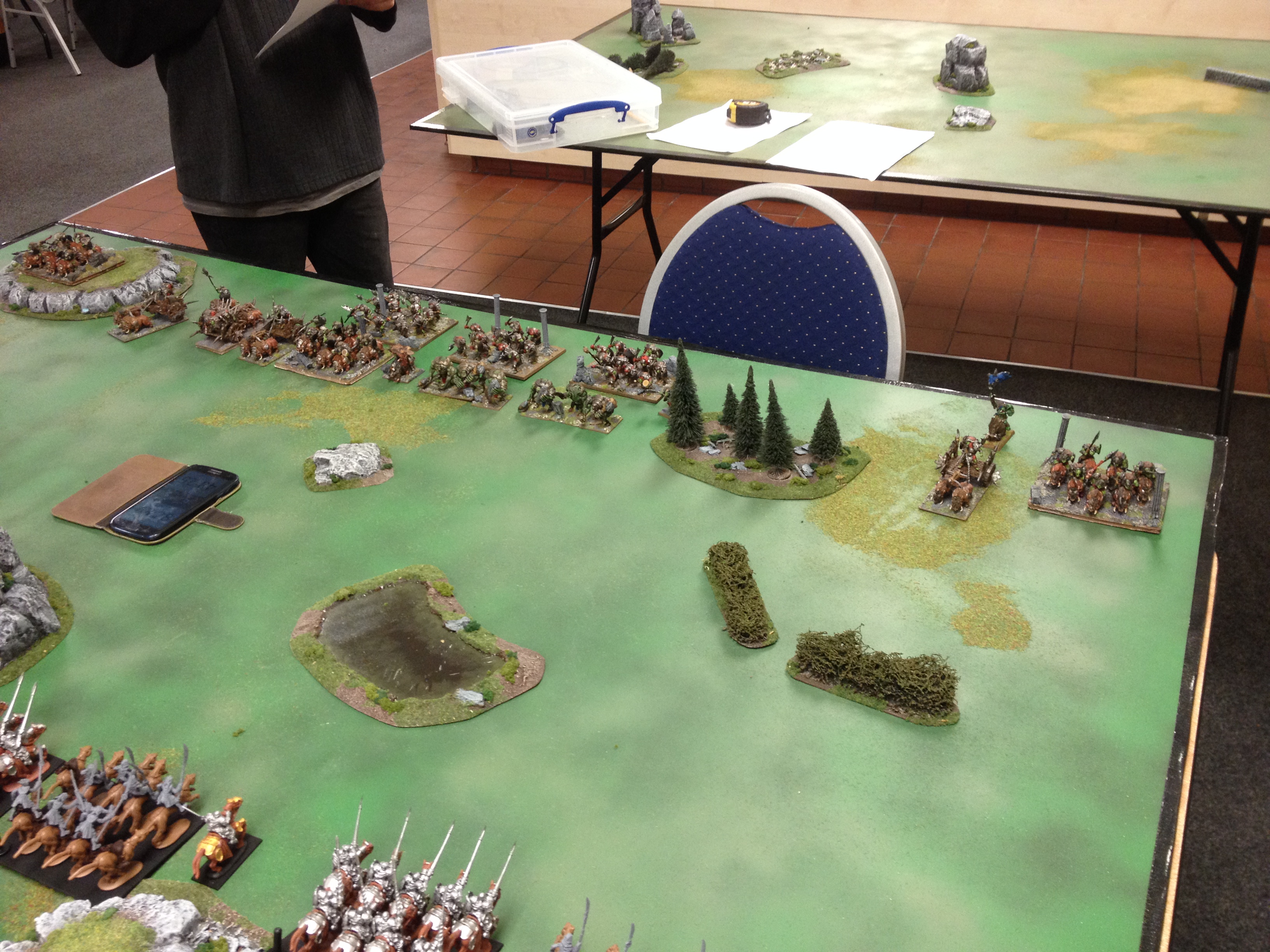 I managed to face off my Panther Lancers with Rob’s Gore Riders and my Paladin’s with his Gore Chariots. In both cases I had a slight range advantage which I hoped to used to get the charge off. I spaced out my characters to keep the inspiration bubbles spaced out but as Rob had little shooting (just the Boomstick) I was too fussed about losing something before combat.

I won the roll for first turn, so after a handshake and exchange of good lucks I pushed my army forwards! I think my first turn took 3 minutes… and that was only so I could double check there were no turn 1 charges for Rob and I had no shooting. Rob’s turn one saw everything advance a little as I was already in range and as he had little shooting it made little sense to retreat. Rob fired off the Boomstick at a Panther Troop but only caused 1 point of damage and a low nerve roll meant the Sisters were still in the fight – this left out armies nicely poised for Turn 2! 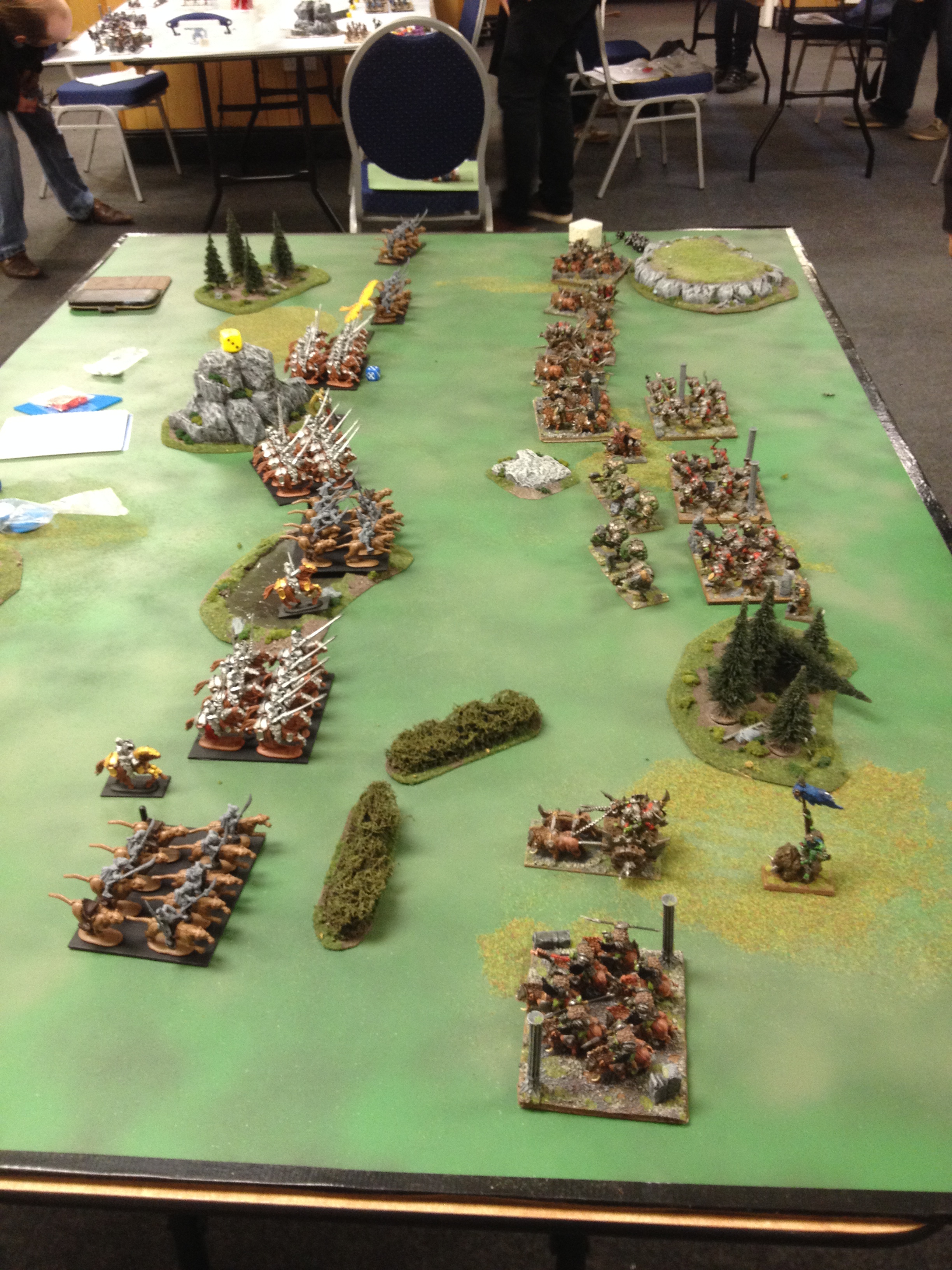 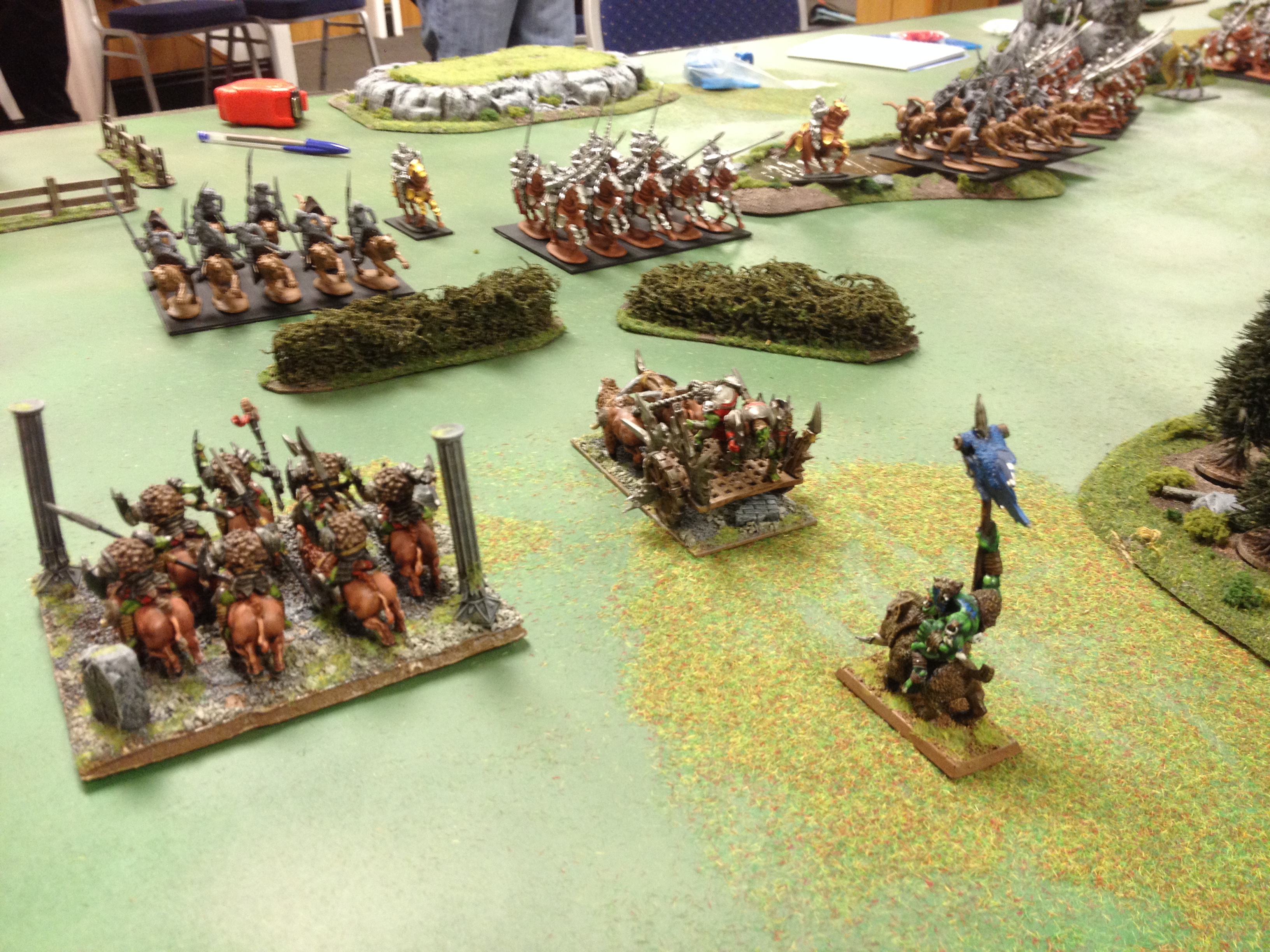 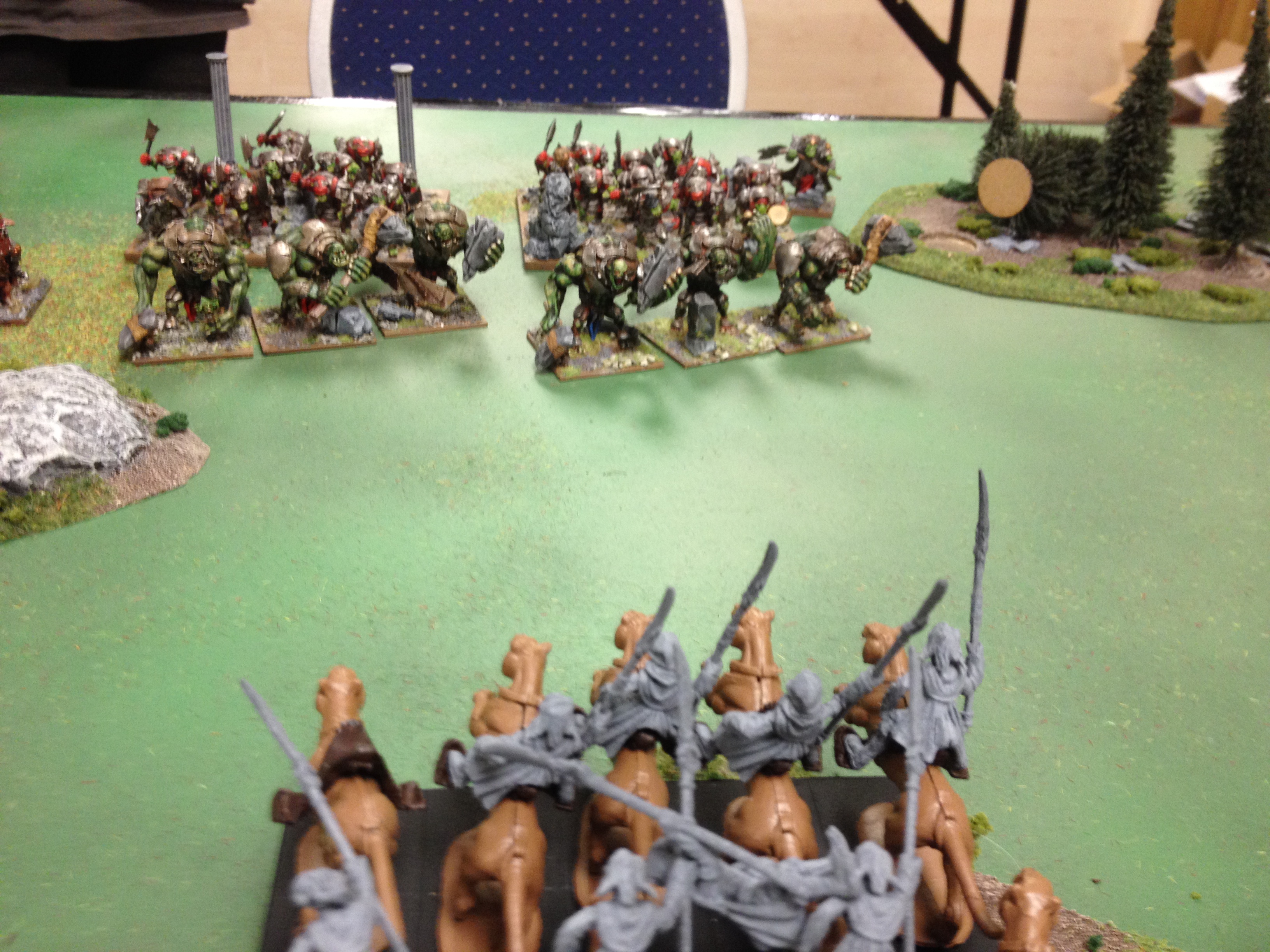 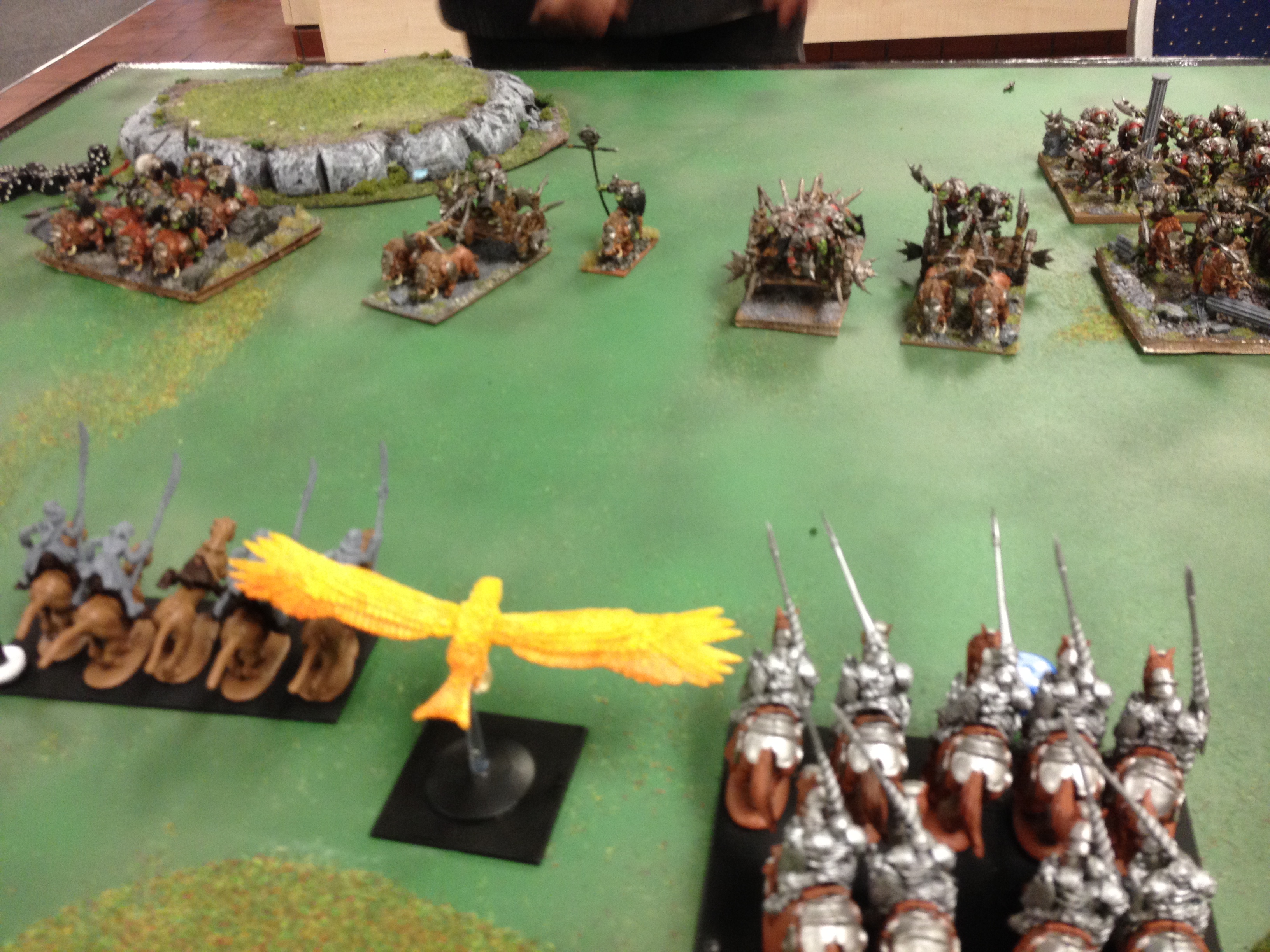 So time to CHARGE! 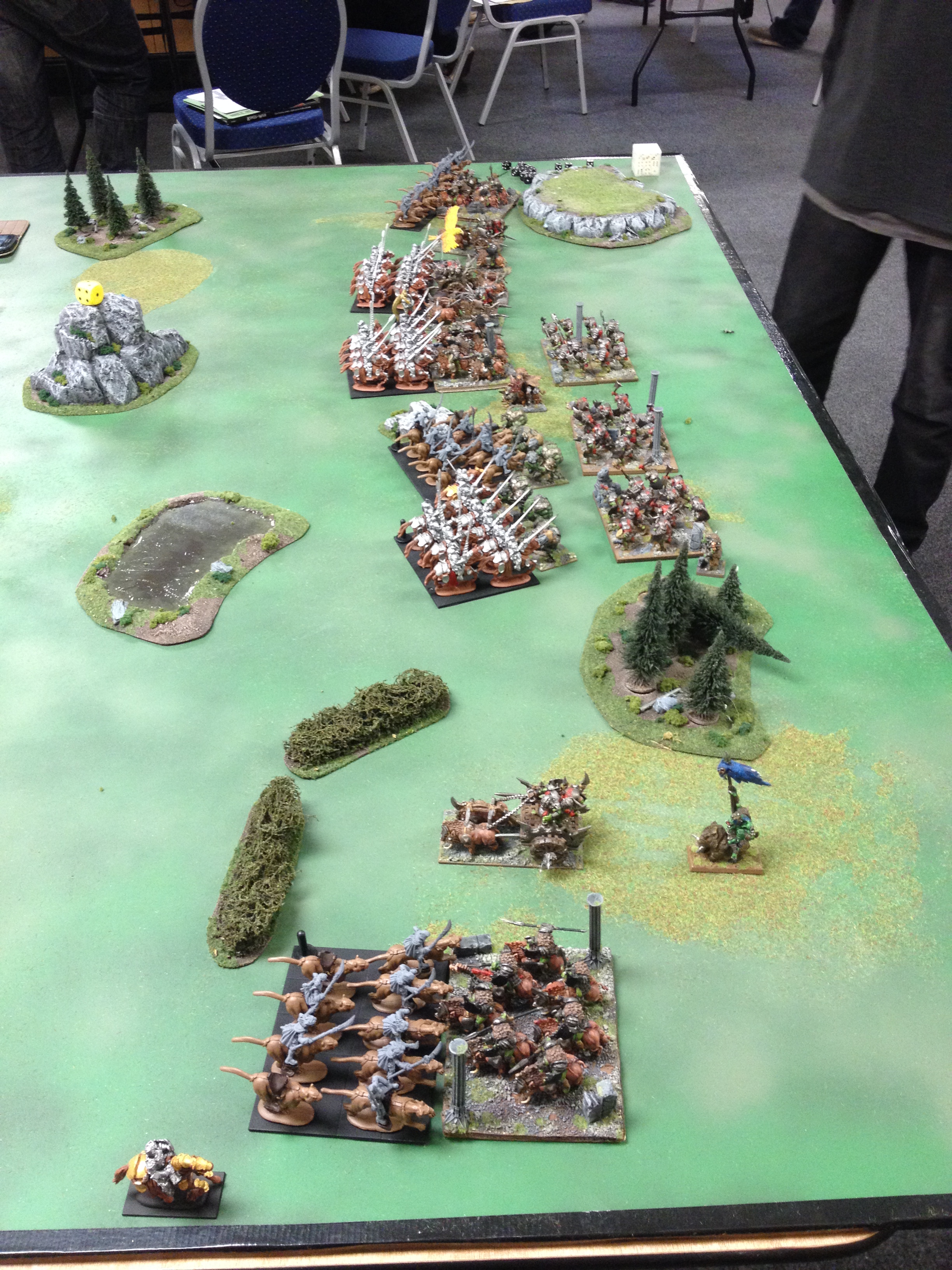 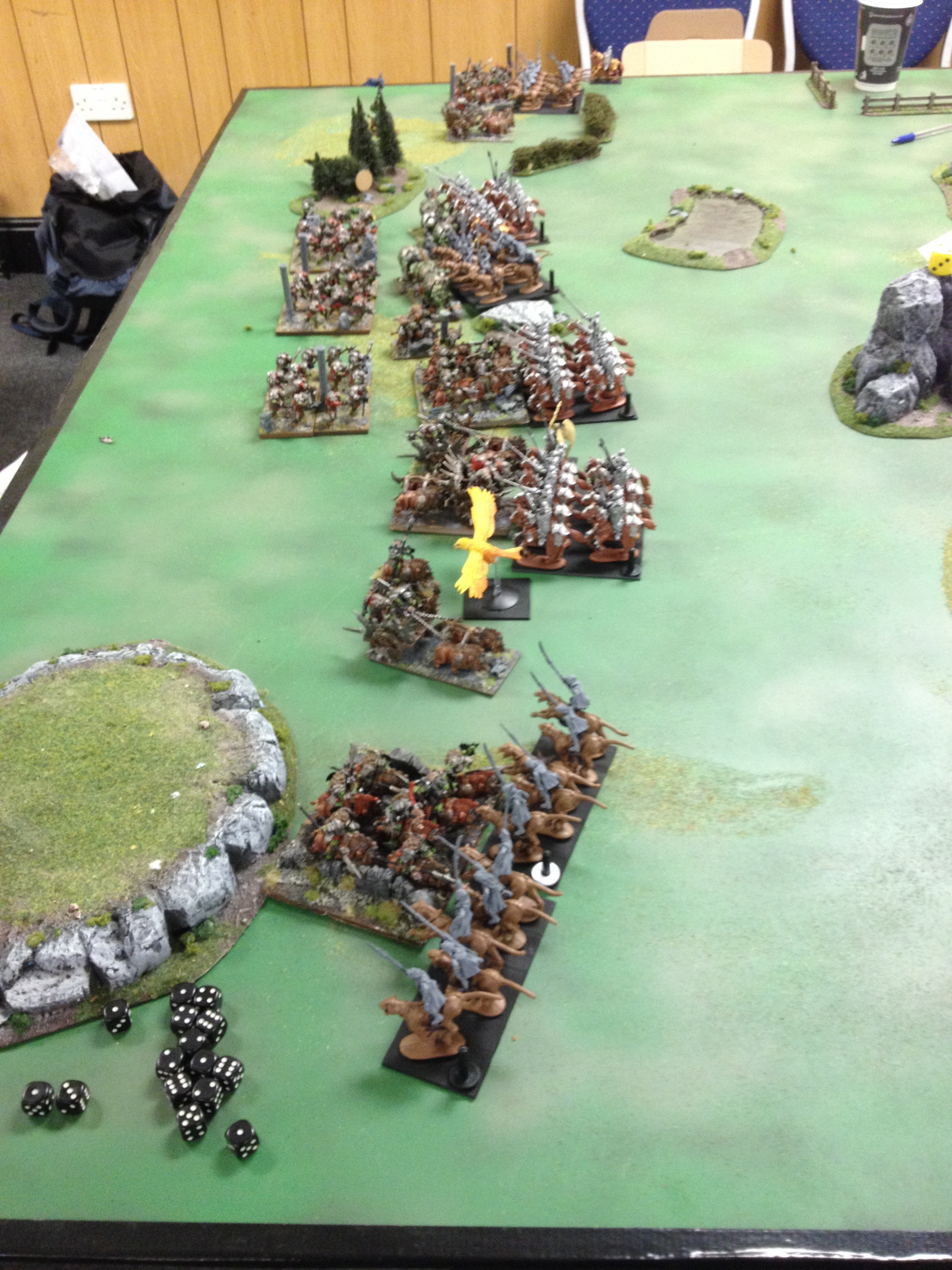 I sent everything in that could charge apart from the Phoenix who could fly up and Breath attack one of the Flaggers whilst also not being counter charged next turn. 2 Panther Troops went into a Gore Rider Regiment on the left flank. A Panther Regiment charged on the Right Flank. Paladins took on Gore Riders, the Fight-wagon and Trolls in the middle. Now begun the dice rolling…

And this is where I think I got very lucky. I managed to waver all apart from 1 Gore Chariot and the Fight Wagon (I killed the Fight-wagon out right)! 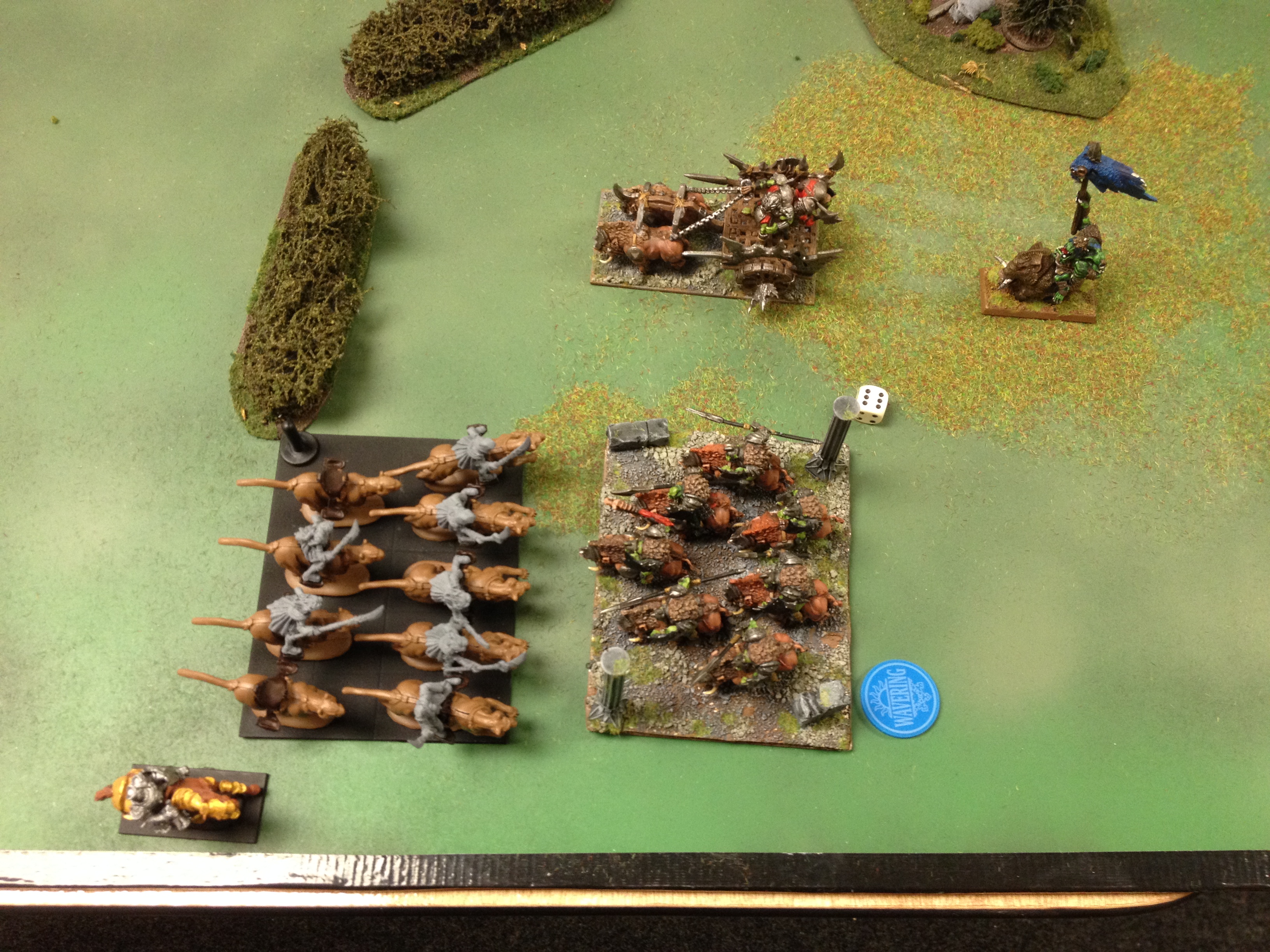 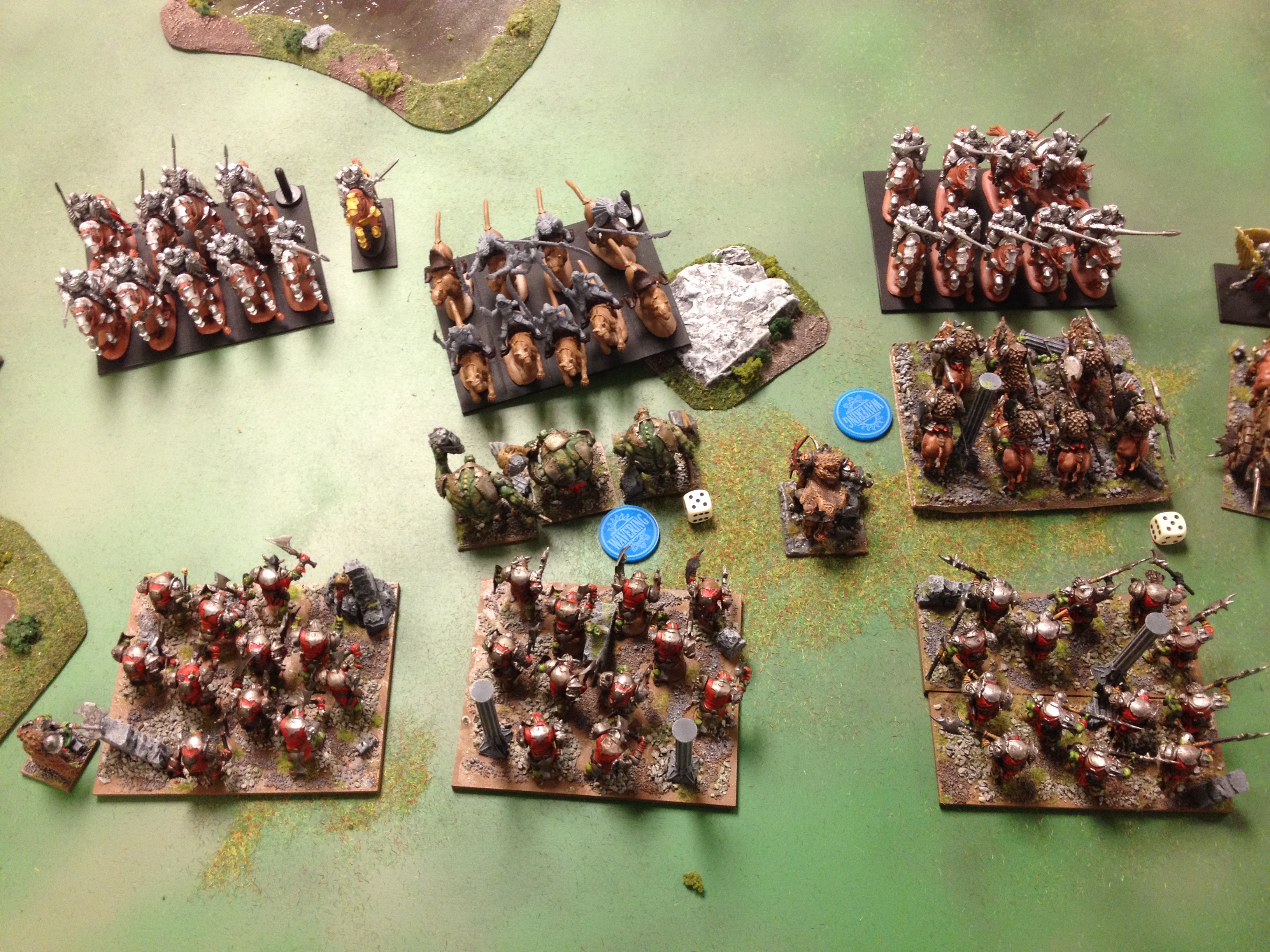 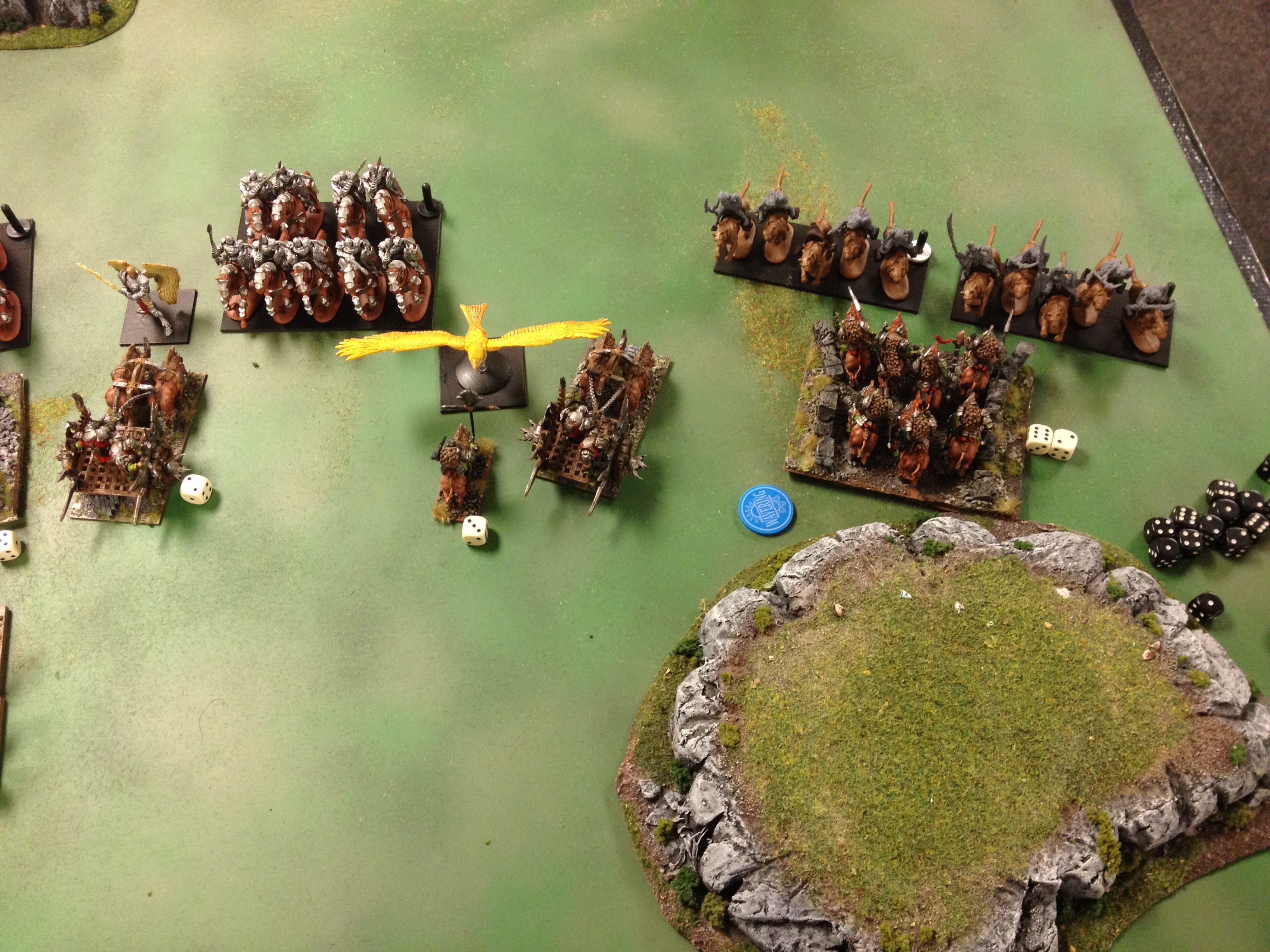 This massively reduced Rob’s options to counter attack as the Orc Infantry were penned in behind his Cavalry. If I had Routed them he could have charged my unit but instead I left a few blockers. Rob managed to charge in a unit of Orc Ax against a unit of Paladins, a Krudger on Gore took on the Panther Regiment in the centre, flank charge the Panther Regiment on my Right flank with a Gore Chariot and the Gore Chariot that had just been charged by the Angel returned the favour! 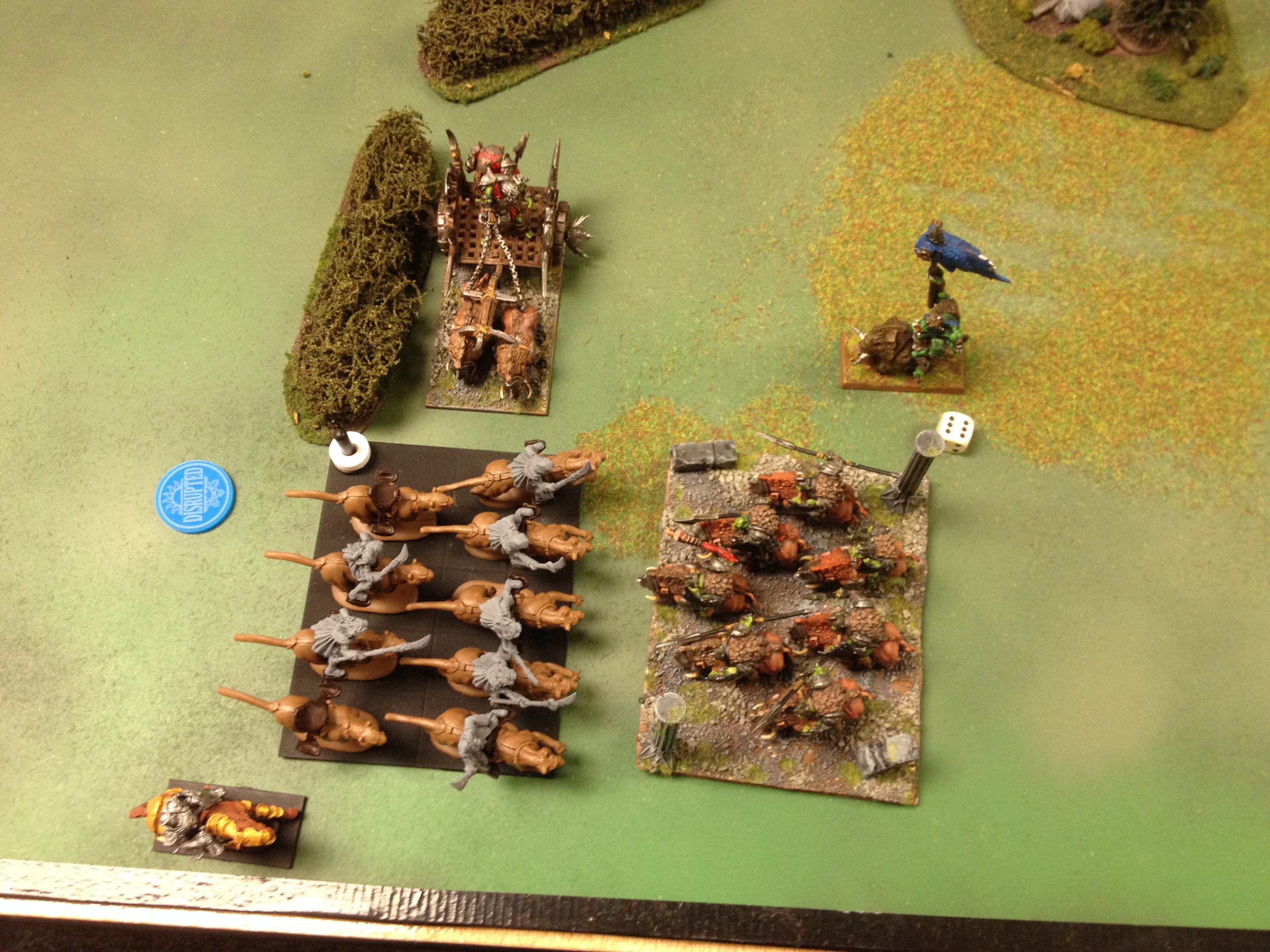 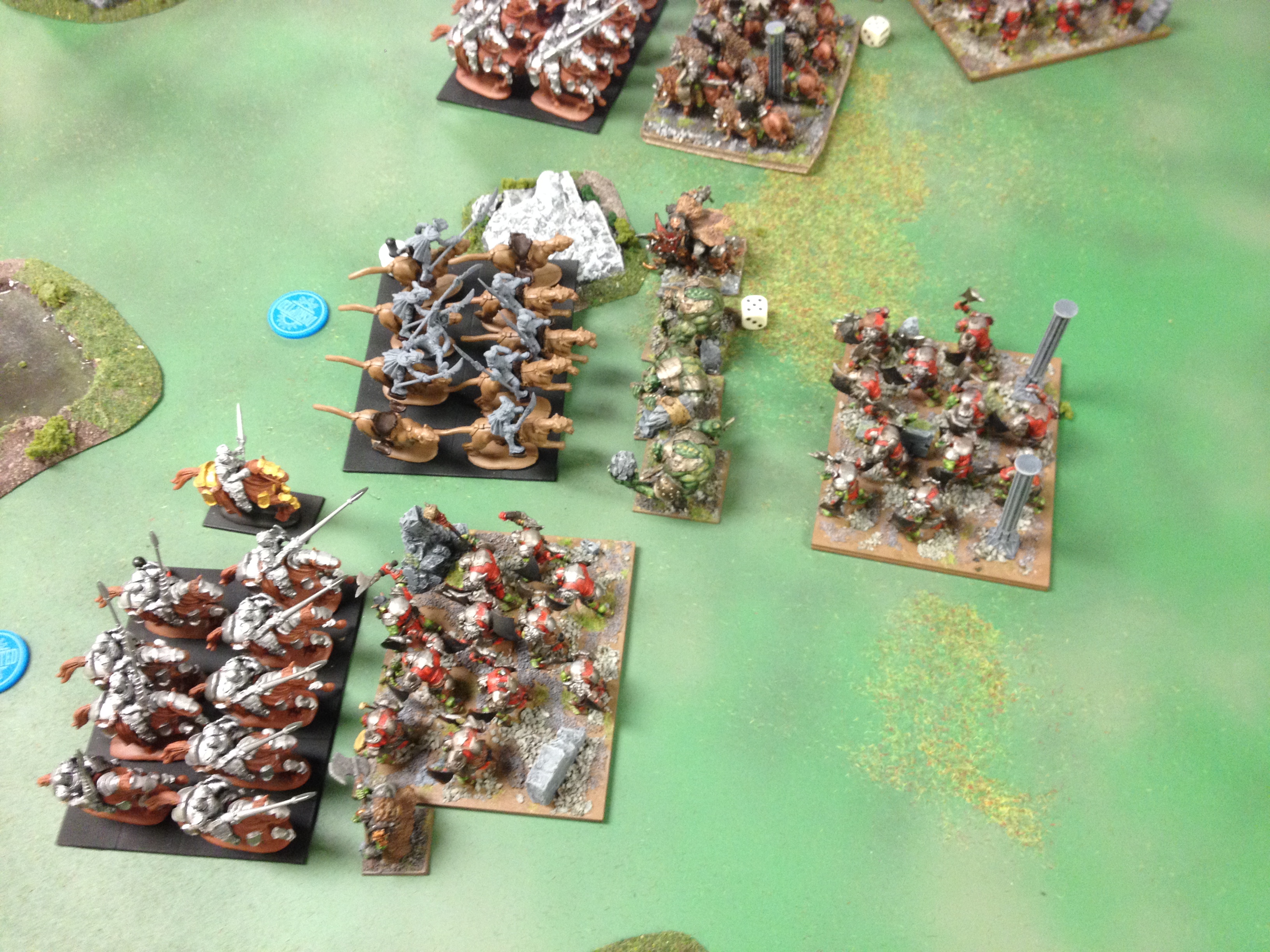 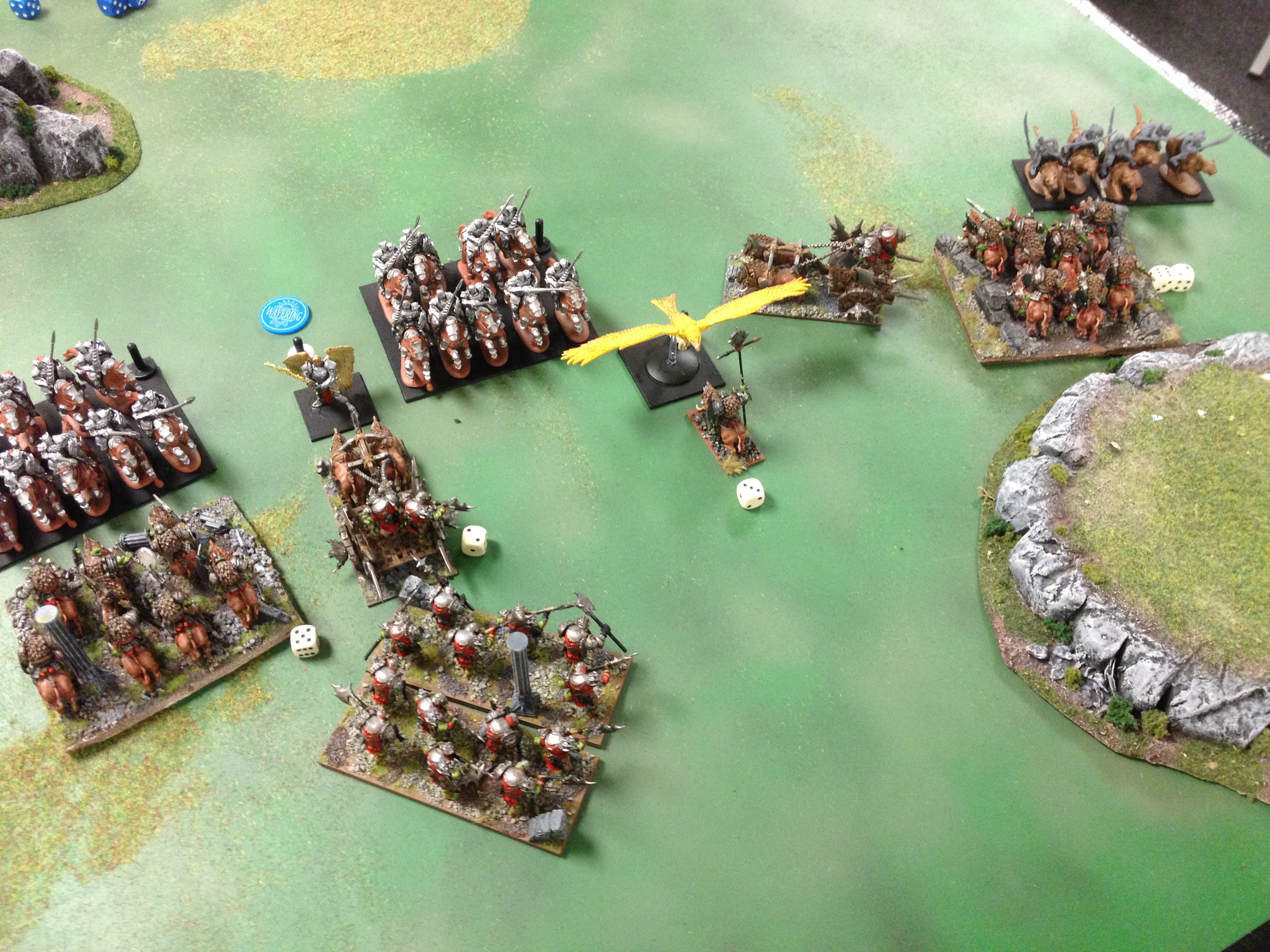 As you can see from my acrylic counters, from Counter Attack Bases (www.counterattackbases.co.uk), only the Angel got wavered, everything else was only Disrupted meaning I was free to charge again in my Turn 3. In this turn I think I managed to Rout all my original targets and now started to out number Rob in combat units. 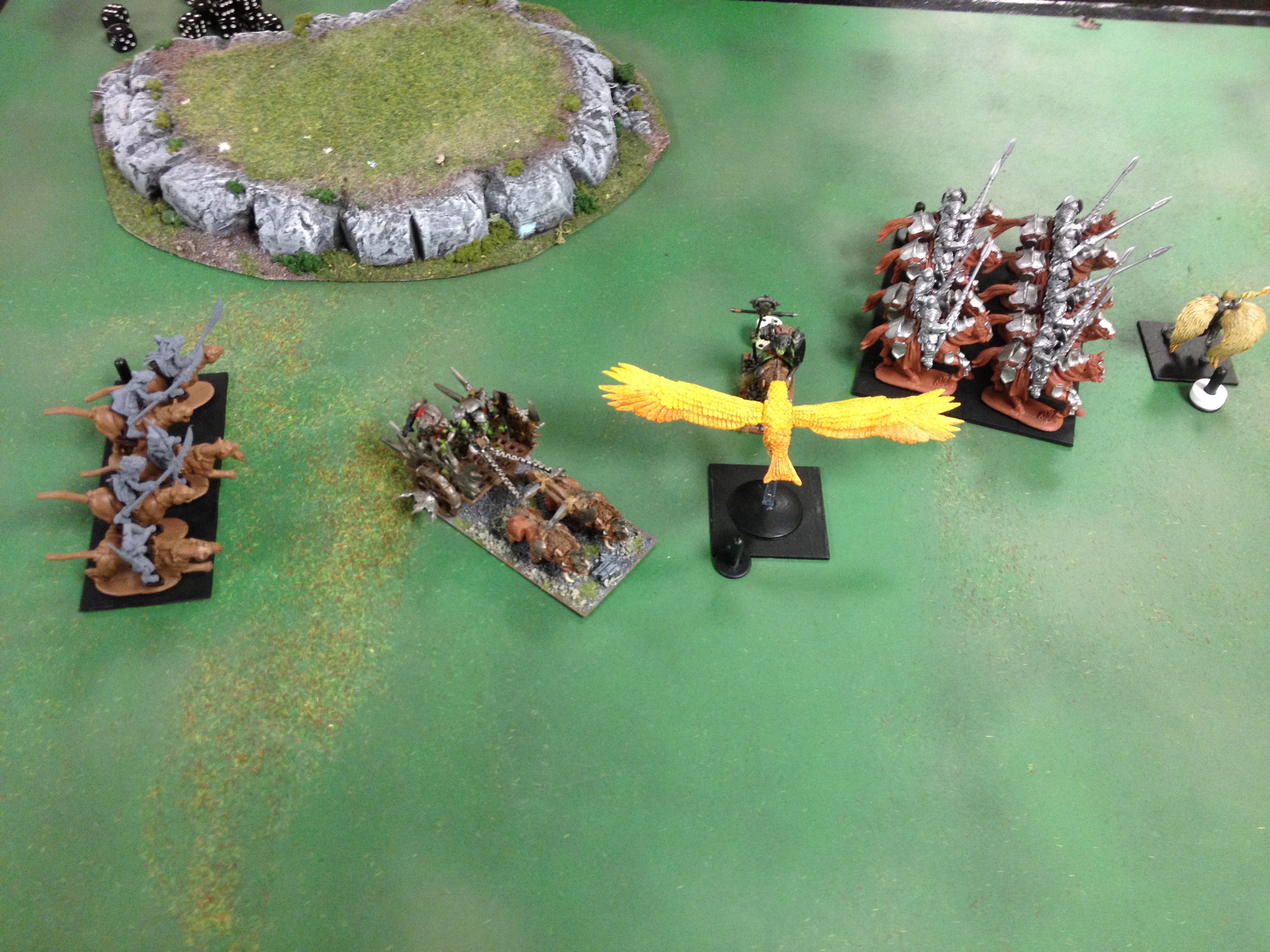 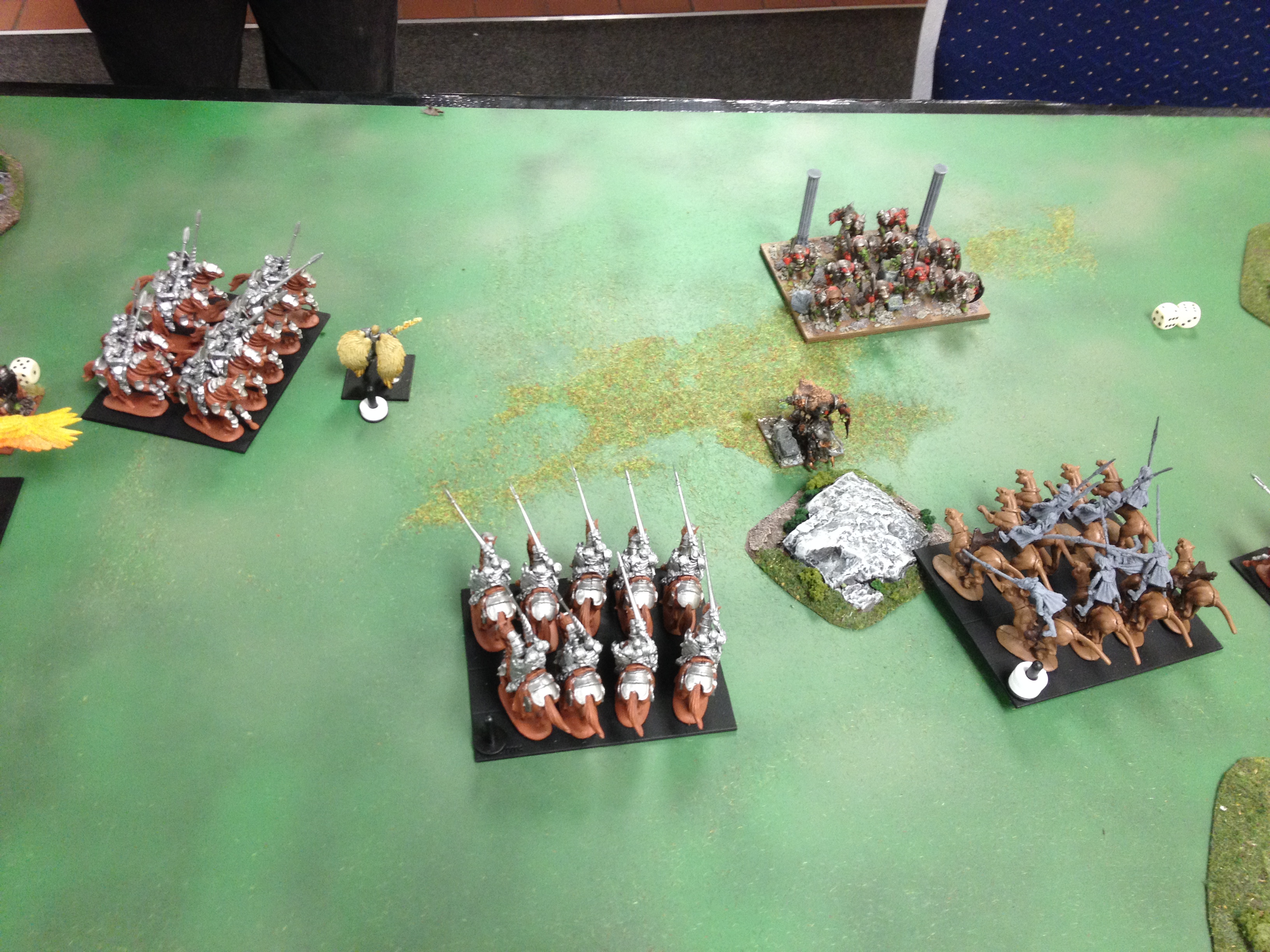 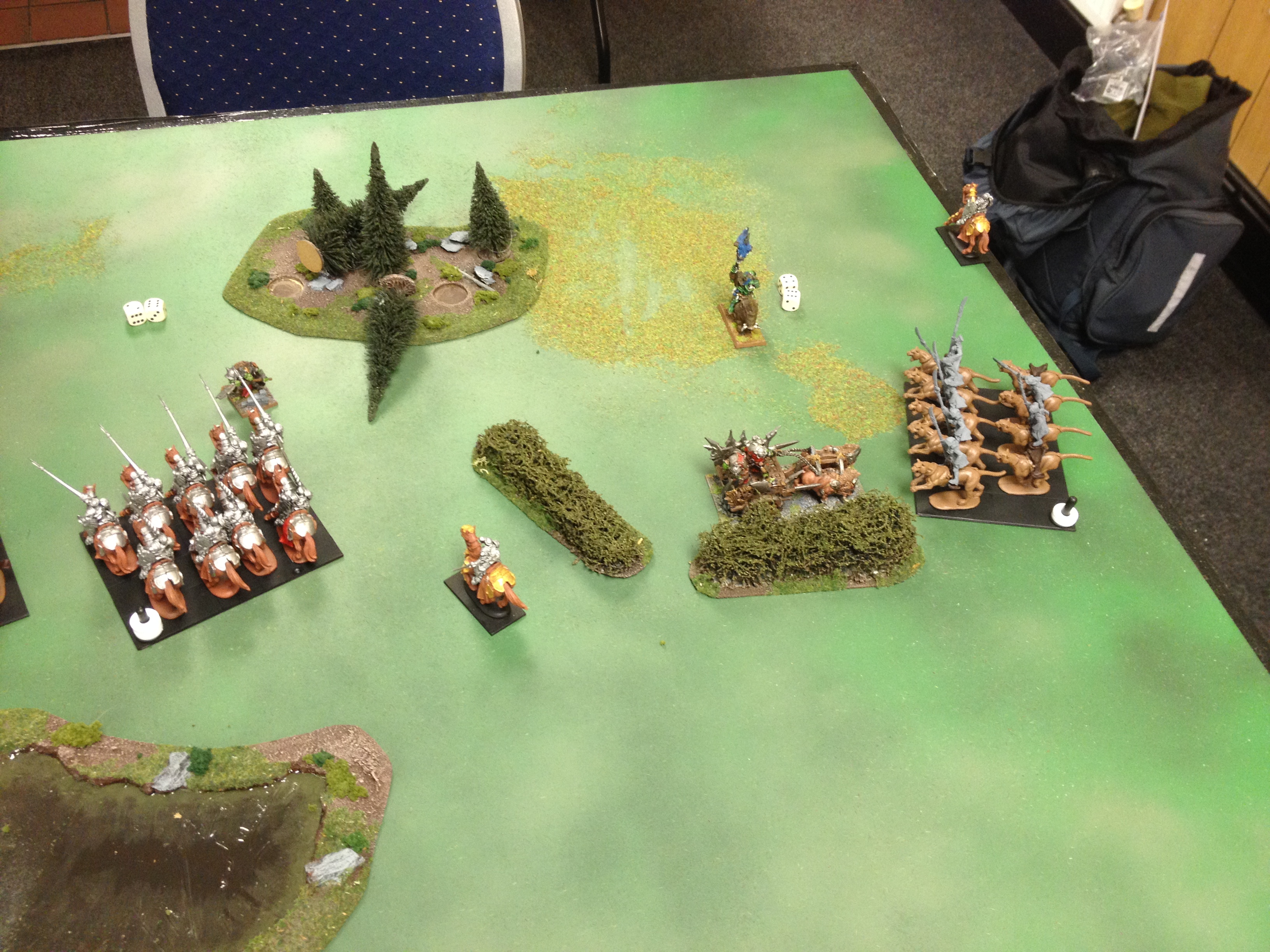 We exchanged blows for the next turn or two but my advantage in units really tolled and I think I killed Rob’s last model in Turn 5. I only had about 5 minutes left on my clock where as Rob had over 20 so really showed how much more action I had in my turn mainly due to all the Wavering in Turn 2.

Rob was a great sport and took the loss well. I think he only had 2 practice games before the event but is already planning his new army (he had borrowed this army from Pathfinder Leon to take part). He’s even challenged me to a re-match which I think we might try to play at the next Open Day!

So we break for lunch and head into Round 2…. which will see a re-match of epic proportions… well for my Blog at any rate!