Tale of a King: Clash of Kings Road Trip: Part 6b

Game 2 at the East Regional at Athena Games, Norwich

Lunch done we move onto Round 2. With my big win I’m top of the pile with a familiar face in 2nd – Luke Watson Mantic’s Community Manager, travelling companion and the 1 opponent who has already played this list! 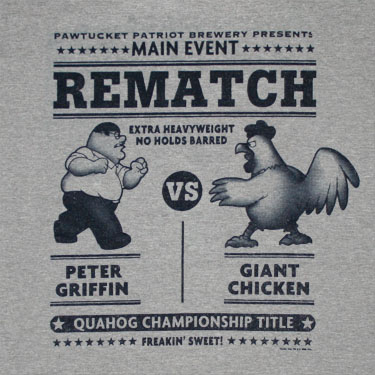 Tim vs Luke could be a constant this year… who will come out on top in the end?

But before we get into the Game I’d like to go over the scoring system from the 2015 UK Clash of Kings.

At the UK Clash of Kings we play the scenarios out of the Main Rulebook but with the restriction that only ‘solid’ units can control objectives. This was added after several years of play testing and designed to stop units like single Drakon Riders and Elohi from stealing away objectives from large units of Zombie Swarms and Ax Hordes! It also means you need to look after these important units if you want to stand a chance of winning the game.

In addition to these points a players score can be modified +5/-5 depending on the difference in how much you kill of the opponents army and what they kill of yours. The winner of the game subtracts the points value of the losers remaining army from their own army’s remaining points value. The players then consult the table below for the adjustment to both players’ scores. It is possible to lose the game but deal more damage meaning you could end up on more than 5 points! 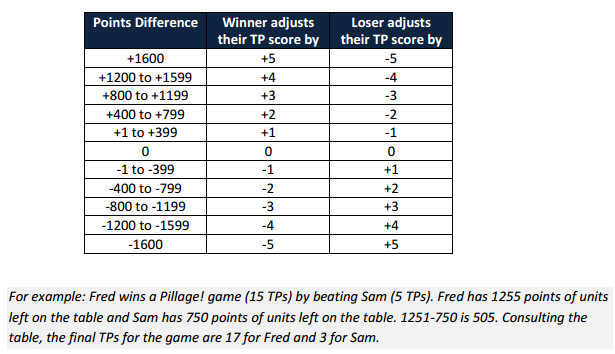 It should also be noted that if you Time Out or Concede you gain 0 Tournament Points including the +5/-5 so best play quickly and always fight till the end!

As a tie-break we record the running total of points of enemy units routed or ‘Attrition Score’ so although you can win by playing defensively you don’t want to shy away from conflict. You might need those points later!

A re-match! Luke was well happy about the prospects of playing me again but it was the same mission (Pillage) so I felt anything could happen – it really depended on whether Luke could land his mortars. If he could it would be a very different game!

So lots of high Nerve, high defence shambling (can’t double move) blocks, with some fast skirmish troops back up by 3 big guns!

We rolled for 5 objectives (D3+4) and placed this fairly spread out across the table.

Luke won the roll for sides and chooses the side with a big hill in his bottom left corner. His first unit he places is a Mortar on this hill… and this is where I start the mind games!! I straight away measure 48 inches from the edge of the hill to the opposite corner, bottom left of my deployment zone and see there is a nice area out of range of his mortars. Luke see’s this and I deploy a Regiment of Panther Lancers knowing that if Luke doesn’t deploy anything on this side of the board they have the movement to redeploy as needed. Luke has a hard decision. Abandon this flank knowing I can deploy most of my army out of range or split his forces. He chooses to deploy a mortar. I then deploy a Panther Troop at 90 degrees knowing I can pivot and double but also keeping them out of range. Luke commits a Gargoyle Troop and the Lone Golem whilst I actually deploy most of my army on the right opposite his hill. I line up a Panther Troop and Regiment plus both Flyers opposite his hill so I can move up and charge his Mortars given the chance. 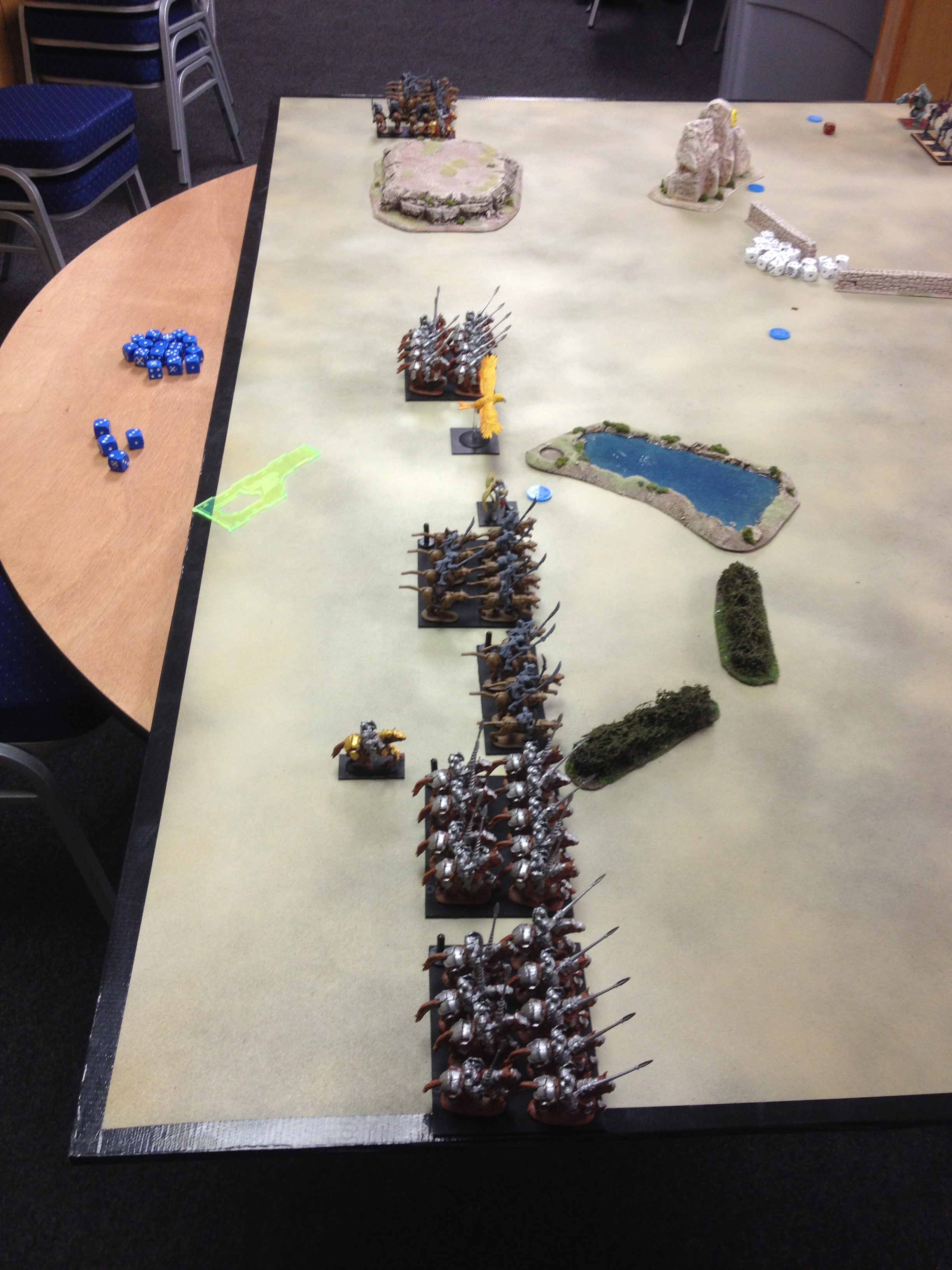 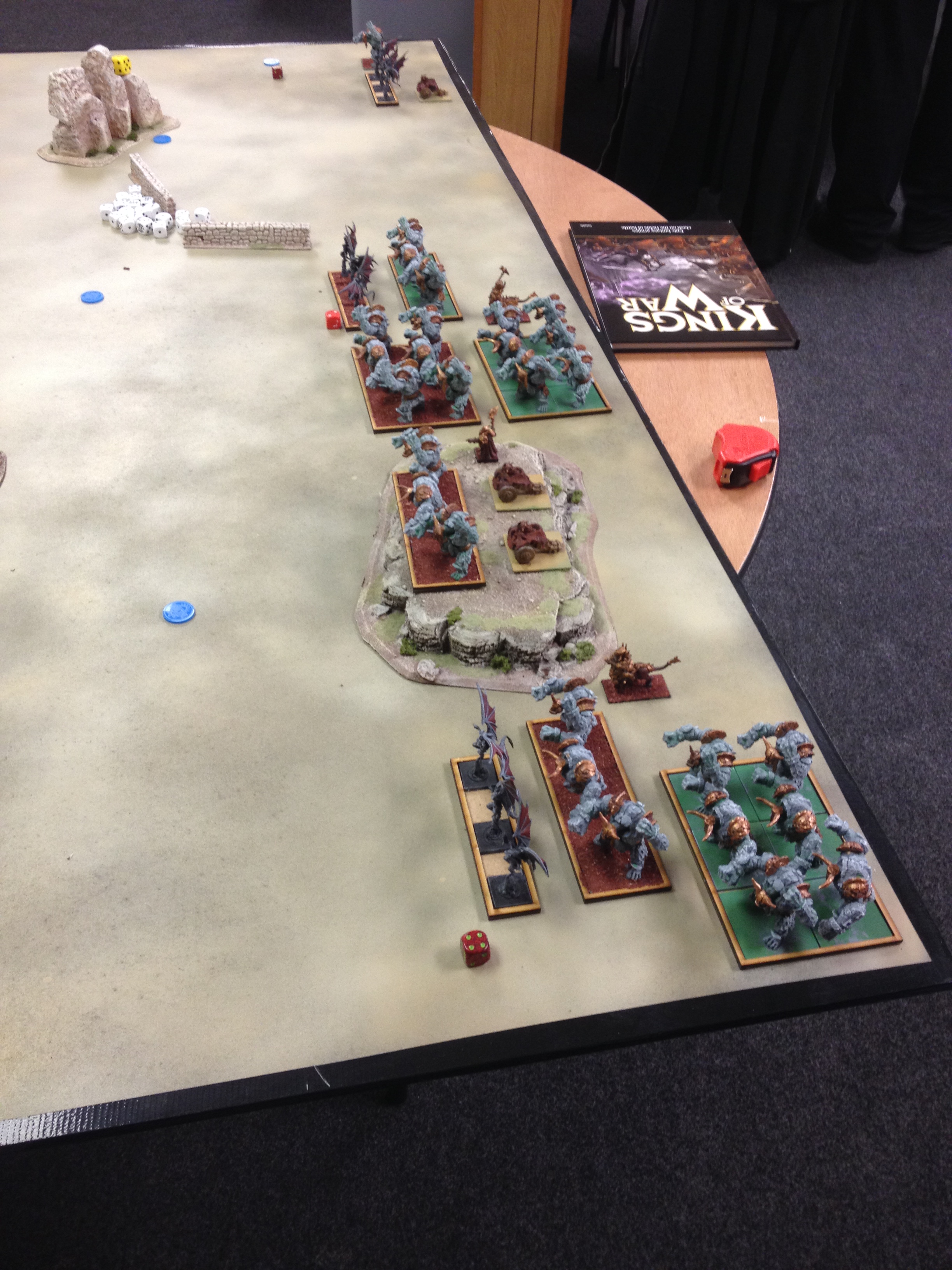 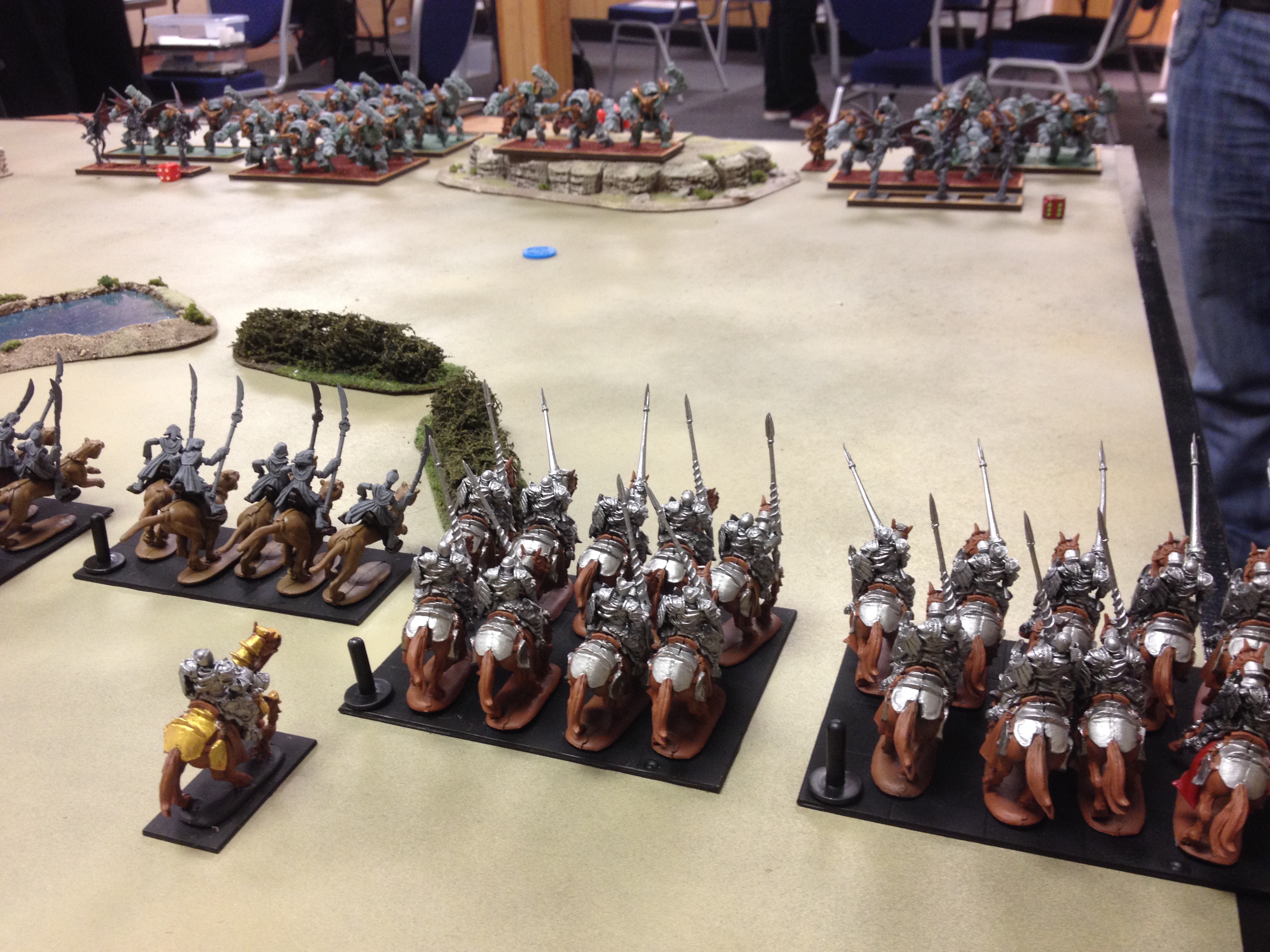 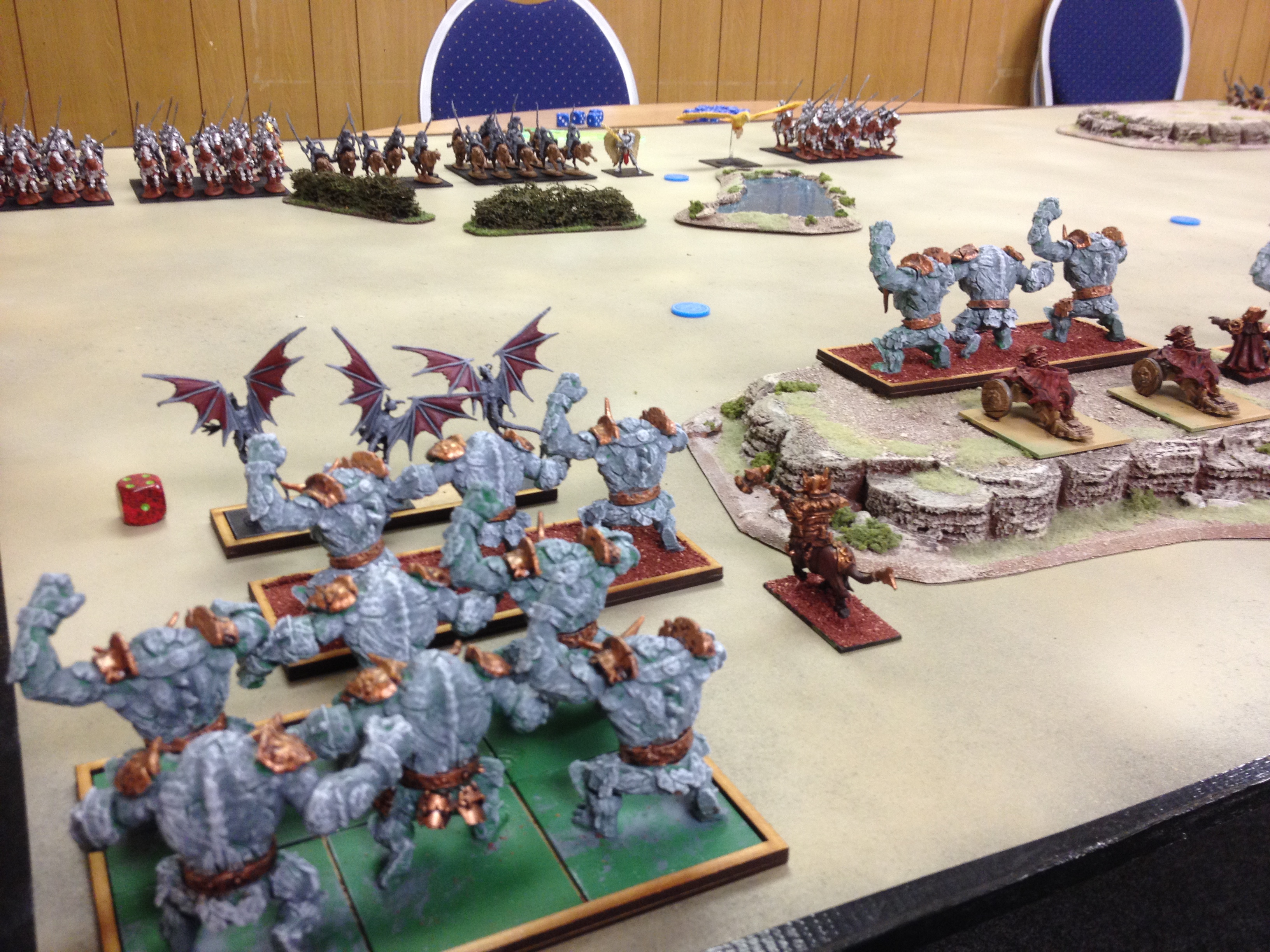 After deployment we shake hands, wish each other luck and roll for first turn! Luke wins and unsurprisingly opts to go first! Take cover my brave Paladins!

Thankfully Luke still can’t roll a 5+ so in my first turn I move slowly up in the centre so that if the gargoyles fly forward and sit in front I have enough space to charge and not get counter charged by the shambling Golems. The Panthers on the left flank and Paladins on the right are not so fussed and advance as far up as far as I can. The Angel Hero hangs back a little so the Phoenix can take the charge of any Gargoyles hopefully freeing up the Angel to charge something on the Hill in turn 2. 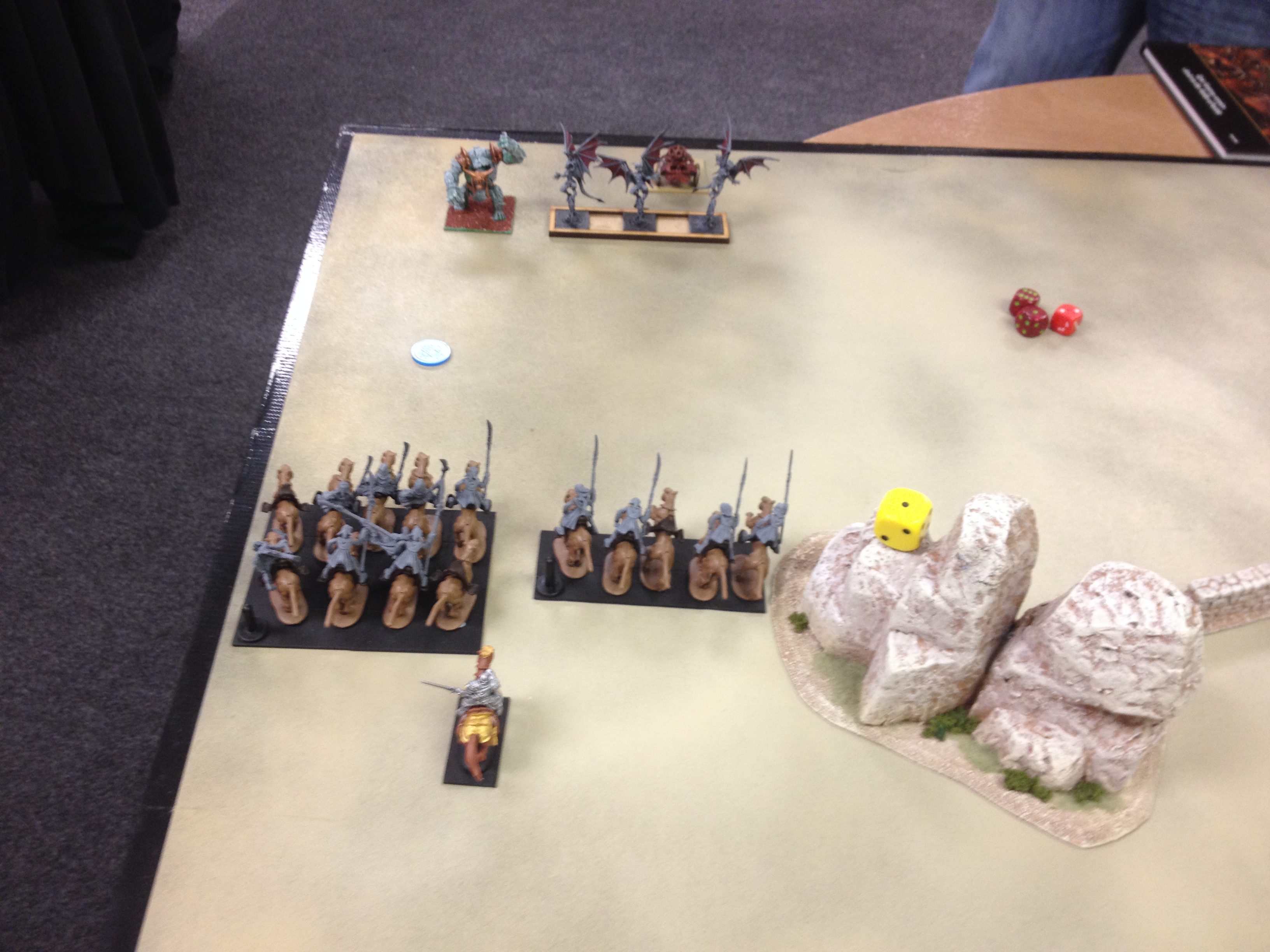 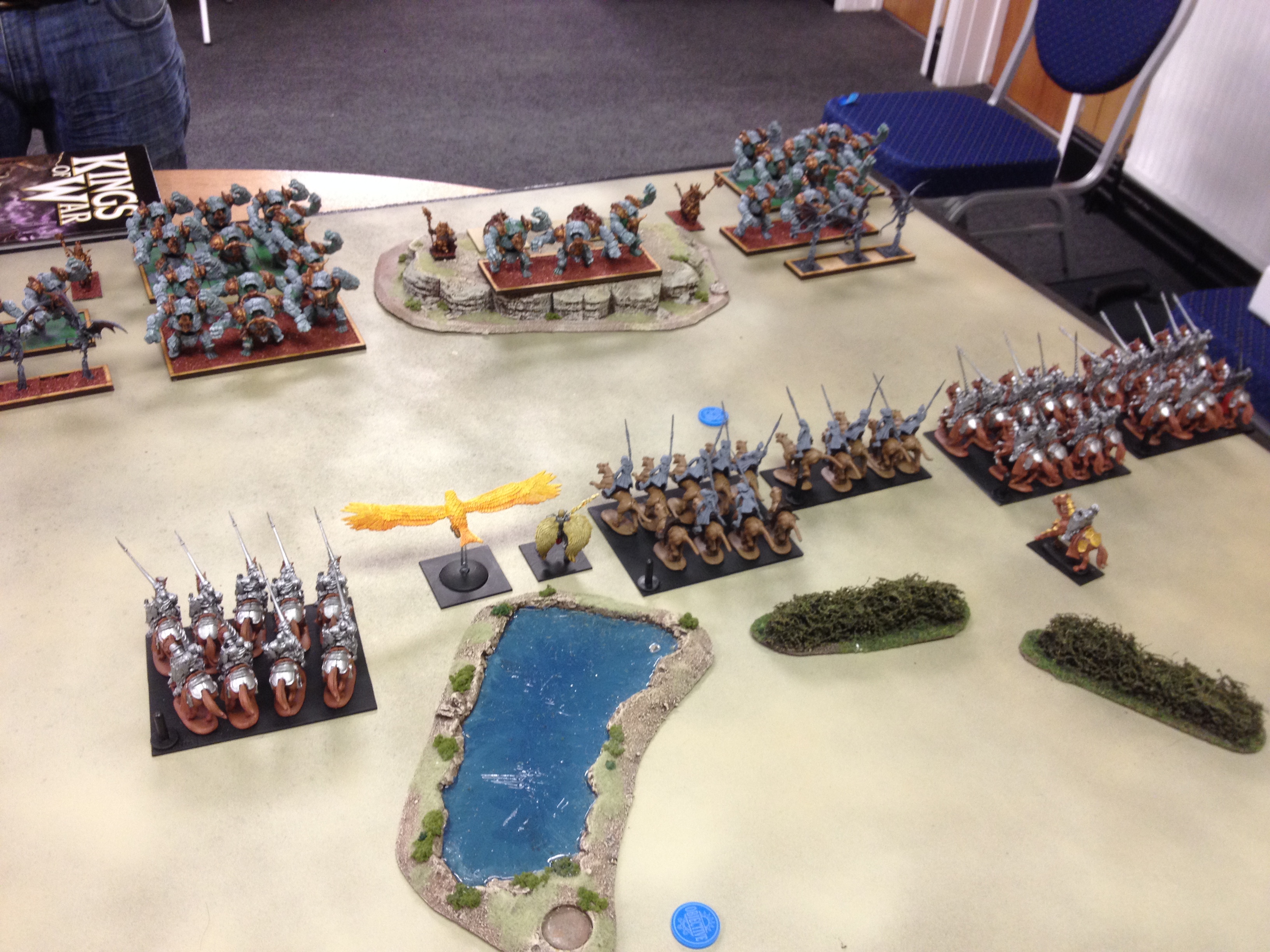 Unfortunately as the game got a bit tense due to how close it was I don’t seem to have many pictures going forward but will try the best I can to re-call what happened! 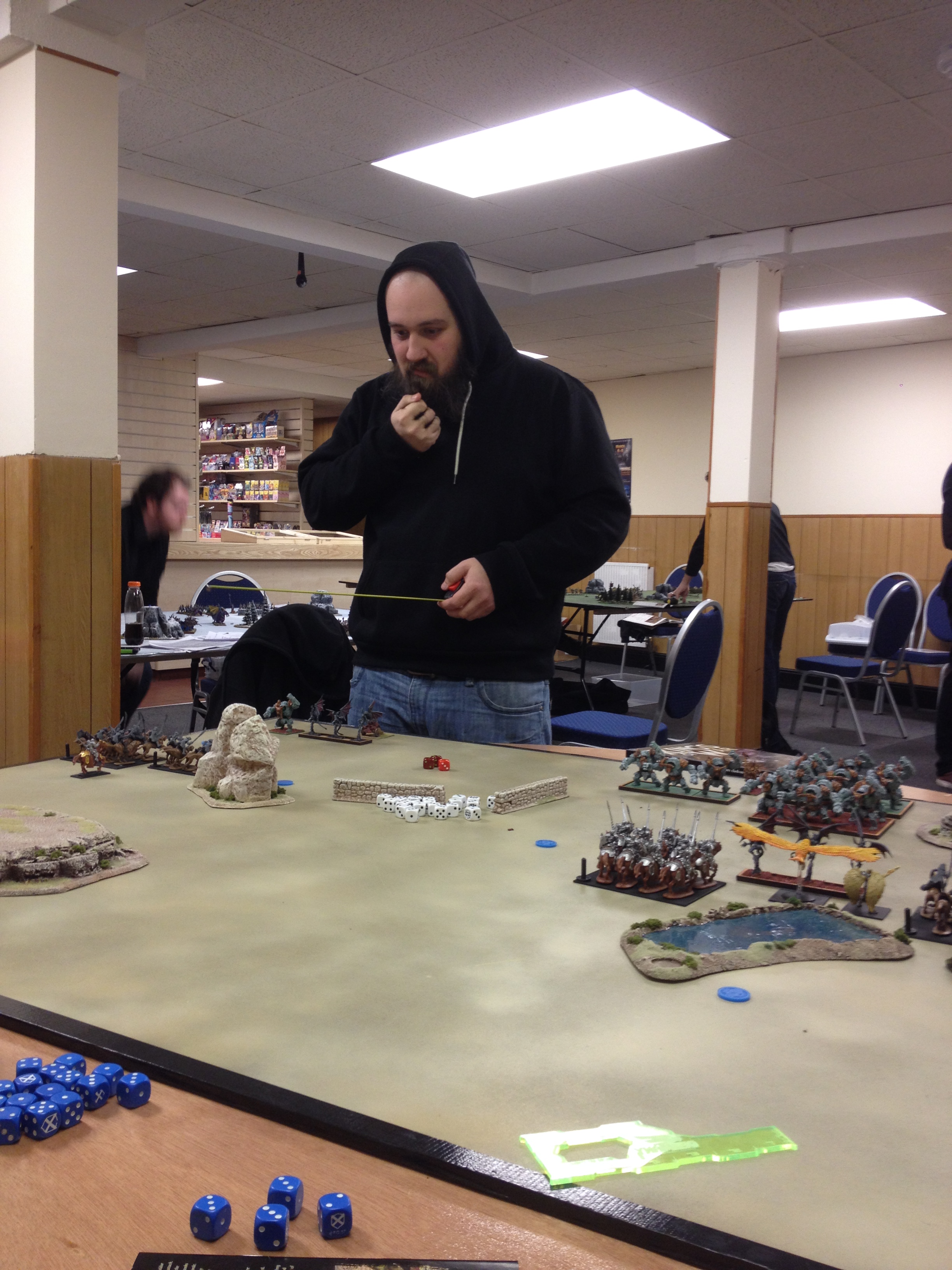 In Luke’s turn 2 he charged the Gargoyles on his right into the Panther Regiment on my left and attempted to block my charge with the Panther Troop using the single Golem – as it is I had enough space and movement to charge. I think a mortar hit a Paladin Regiment and blew them off the board!! The Gargoyles in the centre charged the Phoenix which held.

I my turn 2 I charged on the flanks, Flyers went into the Mortar’s but I held in the centre. The Paladin Regiment would have been horribly counter charged so I think I actually moved backwards.

The Flanks went in my favour after a few turns of combat and I managed to wipe out all the Mortar’s. Luke charges the Golem Troop in front of his hill into the front of the Panther Regiment and flanks them with some Gargoyles – however I think it takes 2 rounds of combat to kill this unit!

In the mean time the Paladin’s in the centre keep retreating from the Gargoyles and the slowly advancing Golem units. 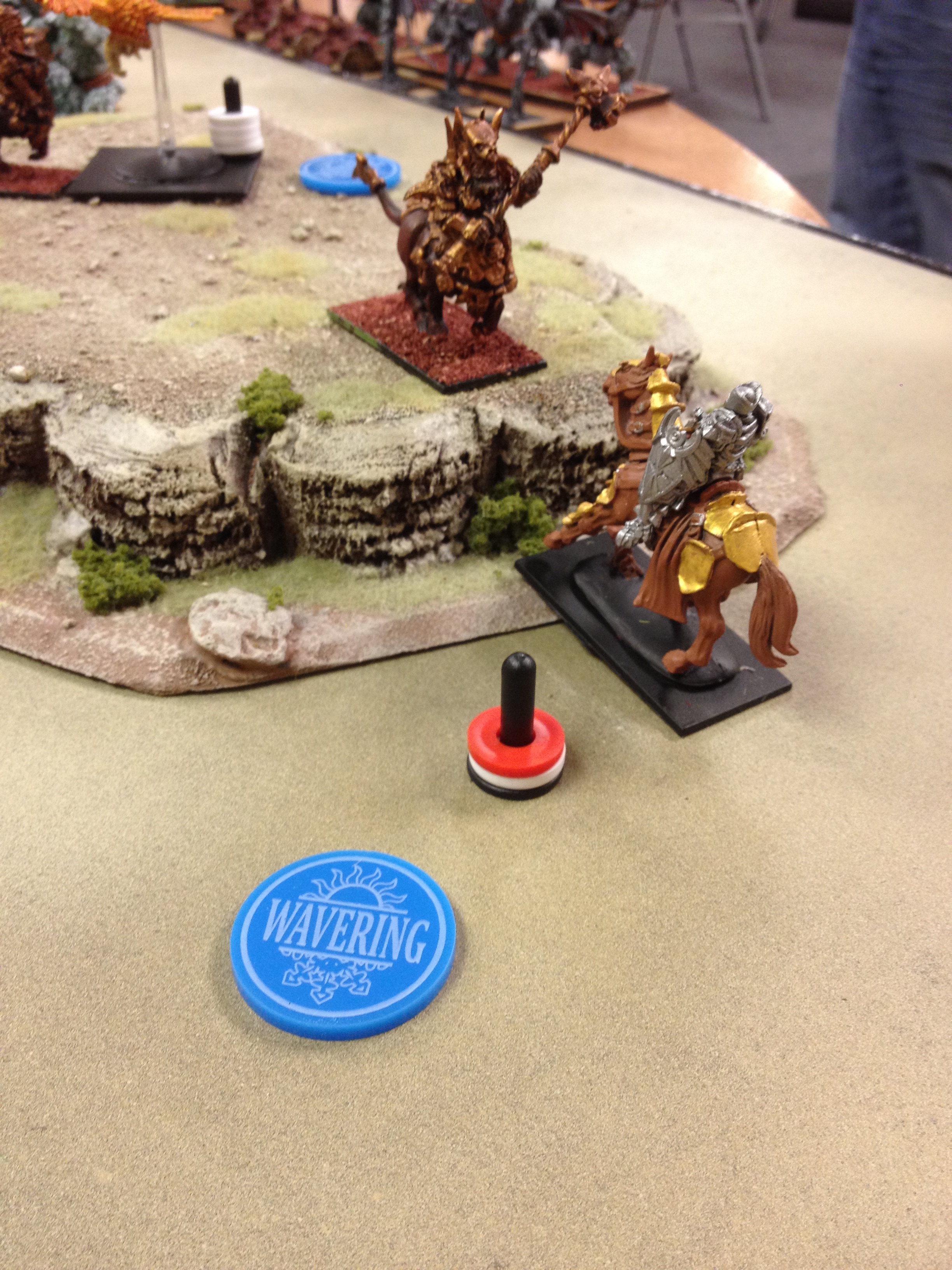 We get into turn 5 and Luke has 2 Regiments of Golems and 2 Troops still alive. I’m down to the Panther Regiment on the left flank sat on an objective, the Paladins in the centre of my deployment zone on an objective and characters and a Panther troop running around his deployment zone. At this point we realise that Luke is too far from the objectives to move on in turn 6 (which I had been banking on) meaning he couldn’t even draw in turn 6. And the game ends Turn 6.

Luke had obviously learnt a lot from our practice game and I had to be a lot more tactful in this game. It ended up a win to me on objectives. I killed 960 points of Luke’s army and he kill 905 points of mine!! This equated to a 16-4 win for the Basileans!

Again I felt I was lucky he missed with the mortars in turn 1, especially after 1 hit in turn 2 removed one of my Paladin units. We chatted after the game about how to play it differently. I suggested using a refused flank tactic and just deploy all 3 mortars together on the hill – give up the 5th objective on his far right and just dominate the 4 within 48 inches of the hill. Yes my whole army can focus in one area or even just avoid him by staying out of range but I can’t afford not to charge if those mortar’s are knocking my units out meaning I have to come close to his Golems to get the objectives.

A good close game none the less!

Game 3 report tomorrow – I’m still at the top! Can I be knocked off?