The 3rd and Final game at the East Regional at Athena Games, Norwich 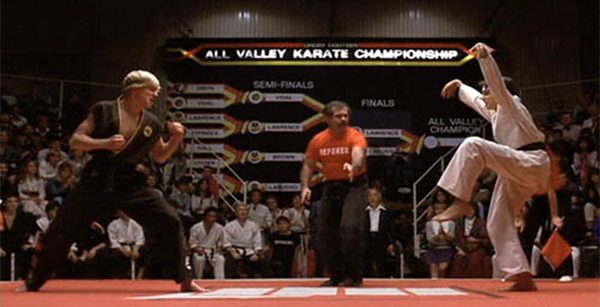 Can Tim go all the way and deliver the killer blow on Table 1?

So Table 1 last round was me vs Jamie (as he had more attrition points than Mark) and Mark ended up playing Carlo who was top of the pack on 21pts chasing the top 3.

Elven Bolt throwers could be annoying with their Elite re-rolls, the Sylvan Kin have a lot of attacks but a nerve value I felt confident in beating and the Forest Shamblers had similar stats to Luke’s Golems. The Nature parts of the army (Herder, Sylvan Kin and Shamblers) also had vanguard allowing them a free move before the game began. Not a massive problem for me as the closer they got the easier it was for me to charge!!

We played on the same table that I played Luke and Jamie won the roll for sides and left me on the side I just played on (didn’t bother me as I didn’t have to move my stuff!).

This game I didn’t bother with deploying out of range of his artillery as although they were more likely to hit they were less likely to nuke a unit in one go. Also the mission was Kill & Pillage so the objectives were worth attrition points at the end of the game instead of just who held the most.

Jamie deployed his Bolt throwers on the hill, I deployed my flyers and Panther troops who would fly over or crash through the hedge row leaving the blocks of Regiments to flank round in the open. 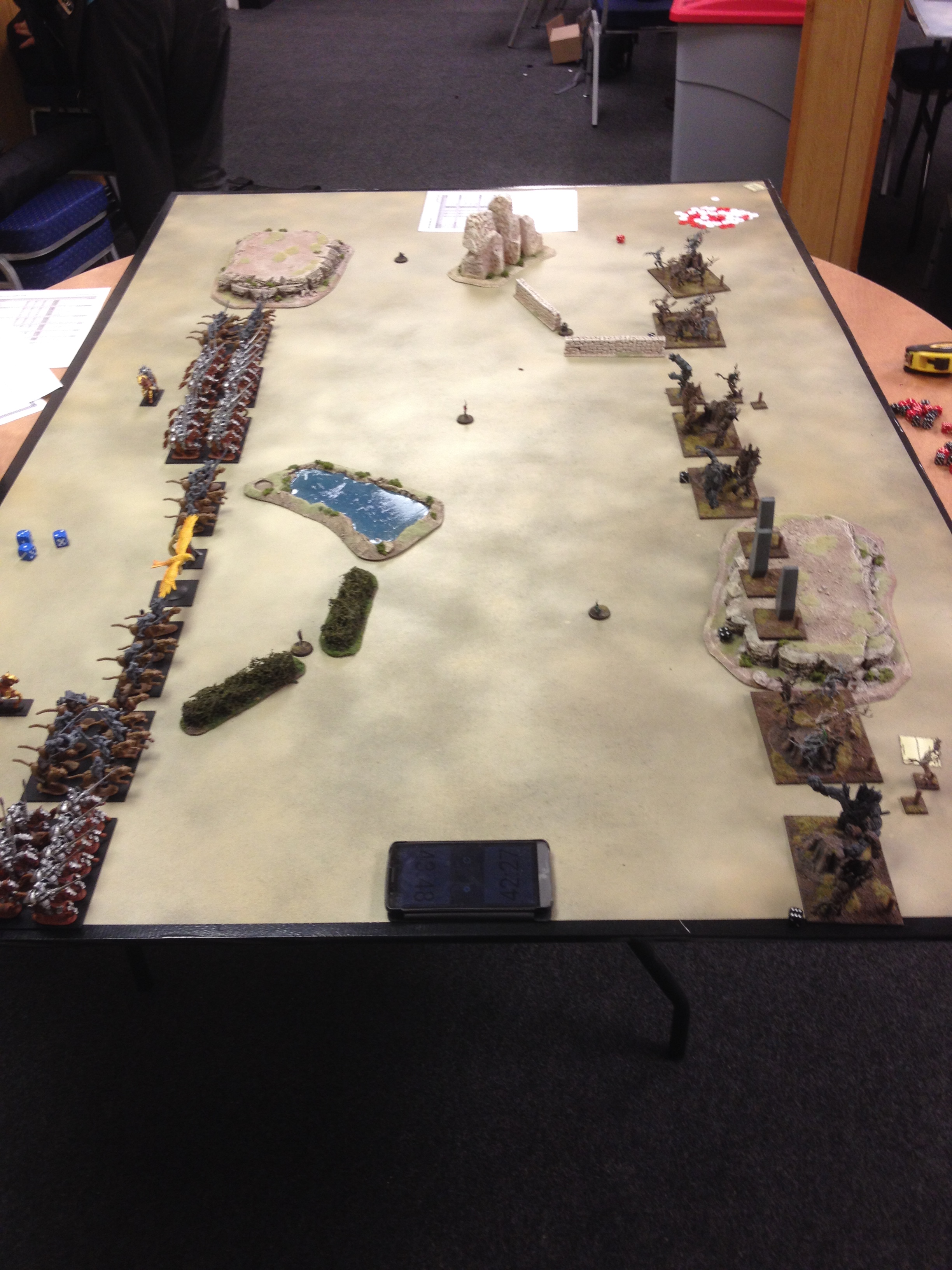 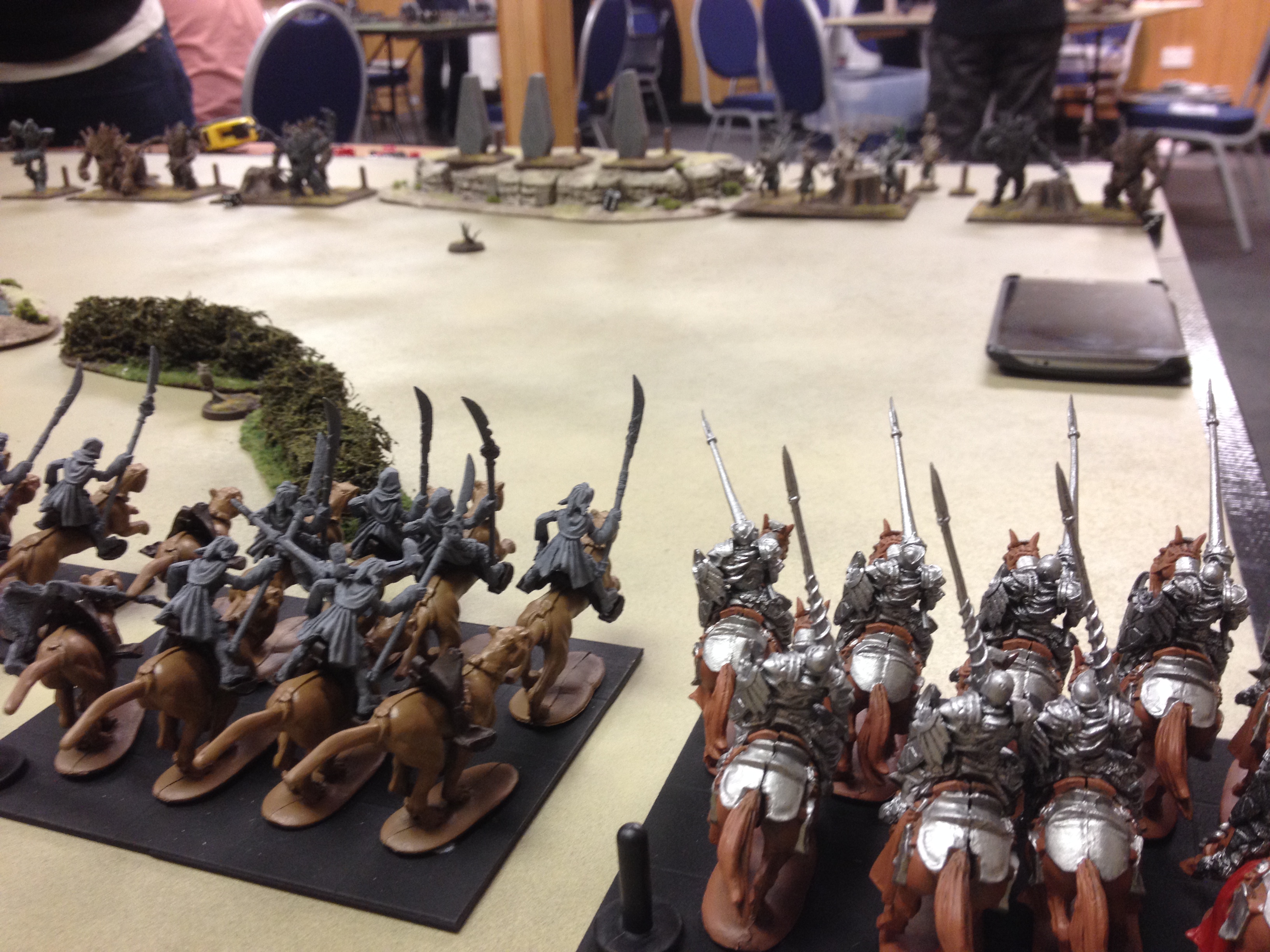 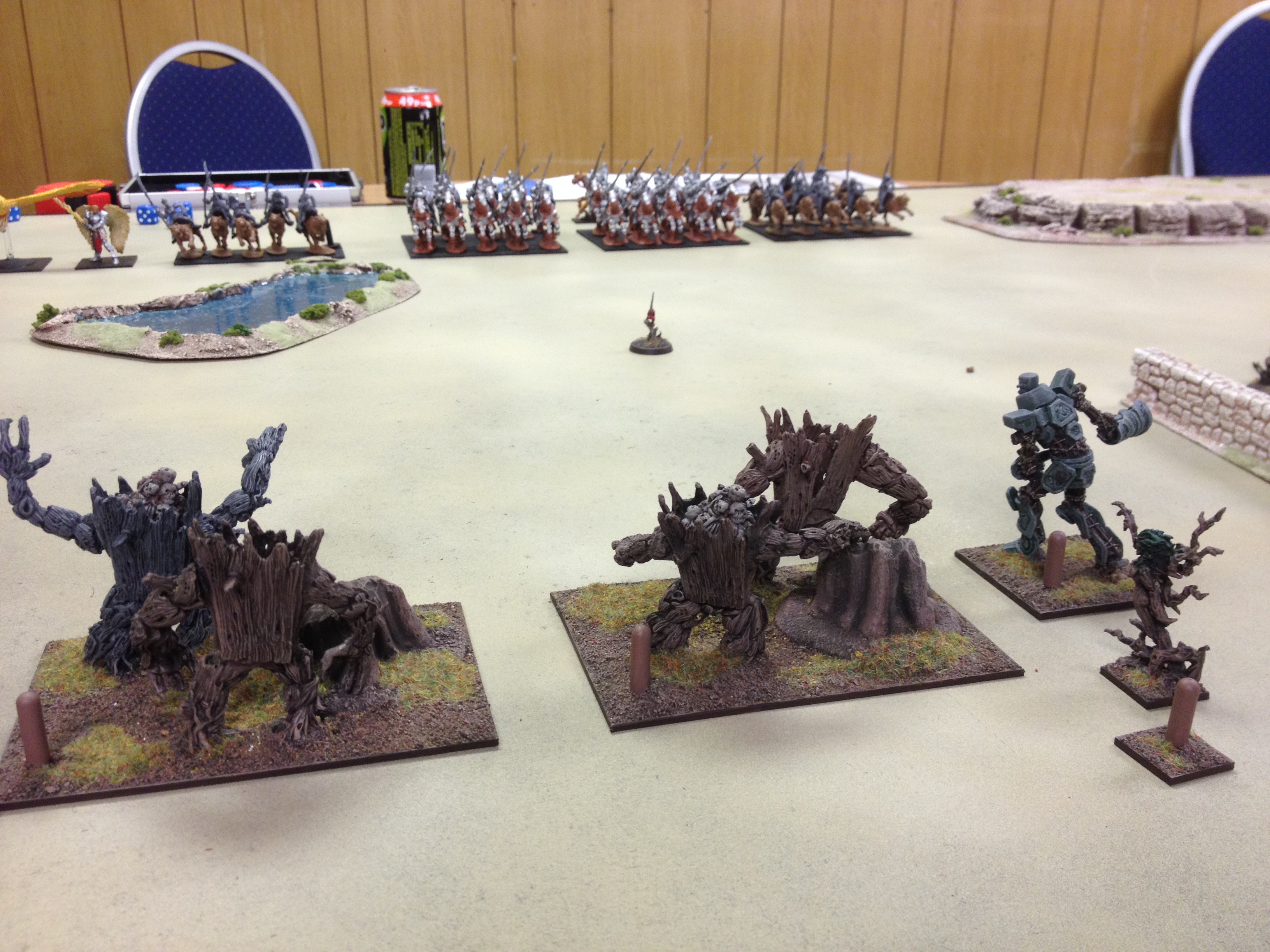 Jamie got first turn (thanks to the re-roll from his Dwarven stones) and vanguarded his units a little bit forward. 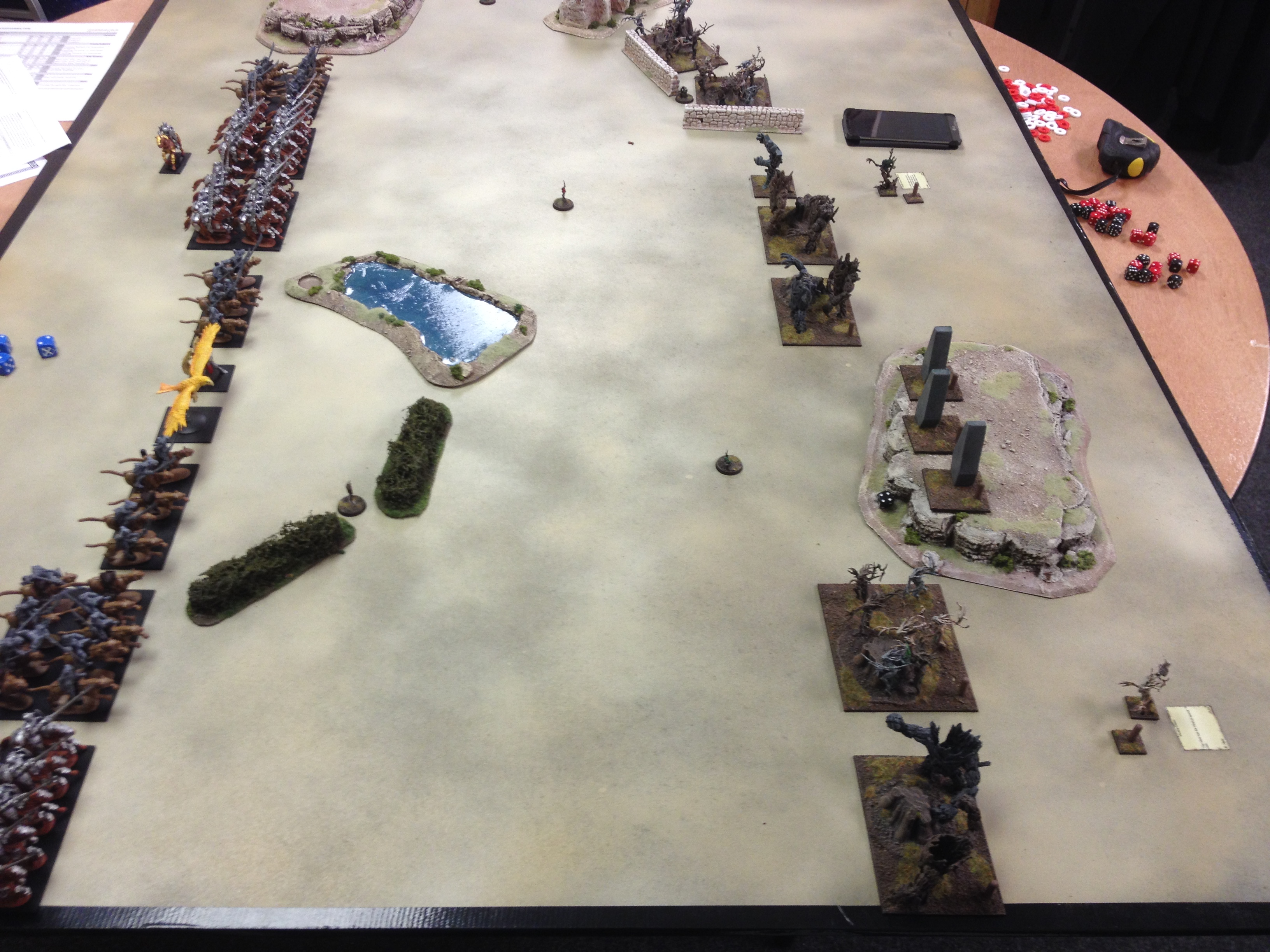 Again we shook hands, wished each other luck and kicked off the final 90 minutes of the East Regional!

Thanks to the vanguard movement there was very little ‘normal’ movement from Jamie, instead moving onto shooting. His 3 Bolt throwers opened up on my Paladin Regiment on the right flank scoring 4 or 5 hits out of 6 thanks to the Elite re-roll. However luck was still on my side and his D3 blast rolls came up as 1’s and 2’s. This put 5 points of damage on the Knights who survived their nerve roll. My turn 1 saw a slightly slower advance than against Luke due to the terrain and Jamie’s greater charge range followed by a little healing from the High Paladin on to Paladin Knights. My left flank was especially cautious with the Sylvan Kin in defensive positions. 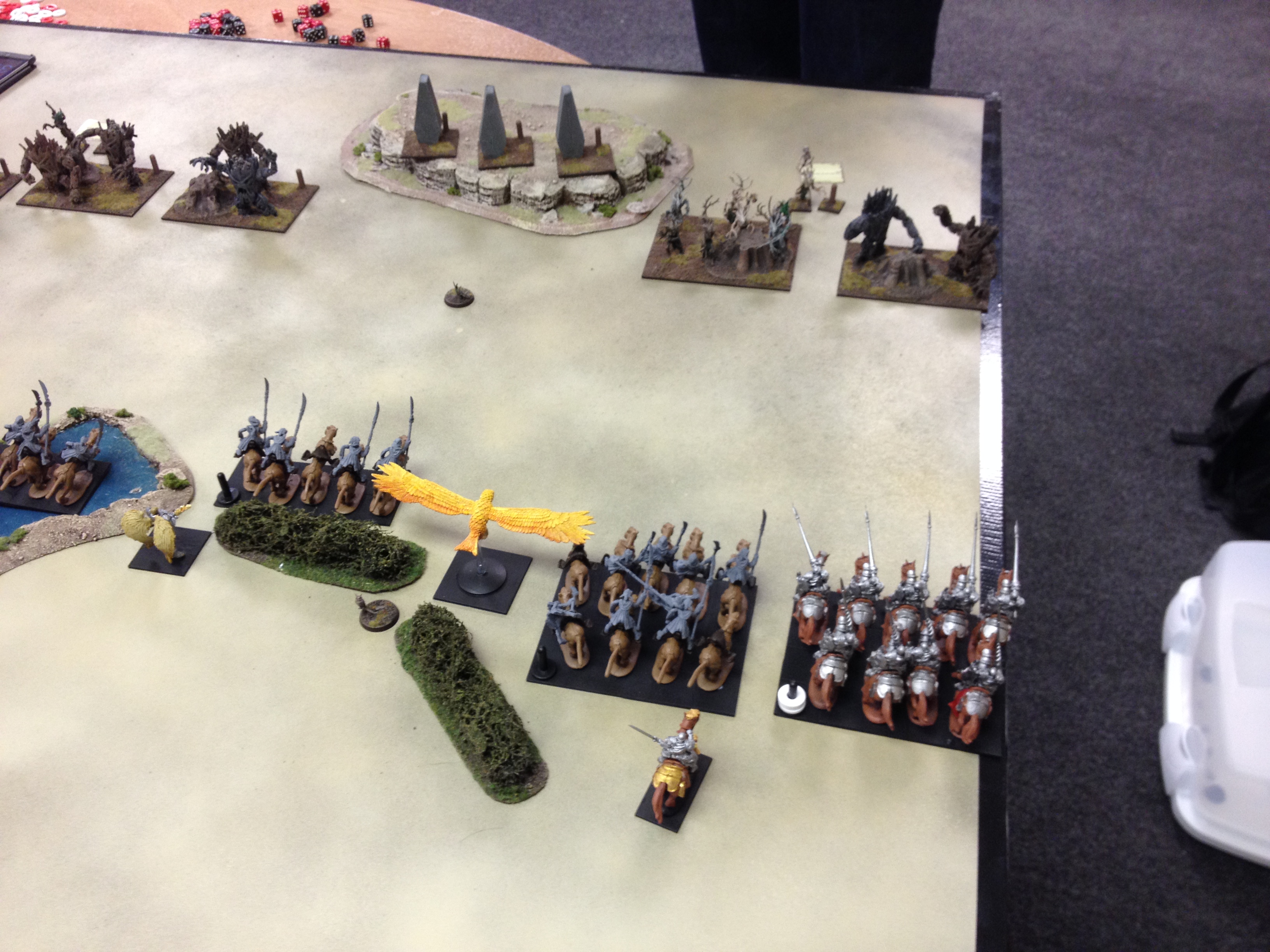 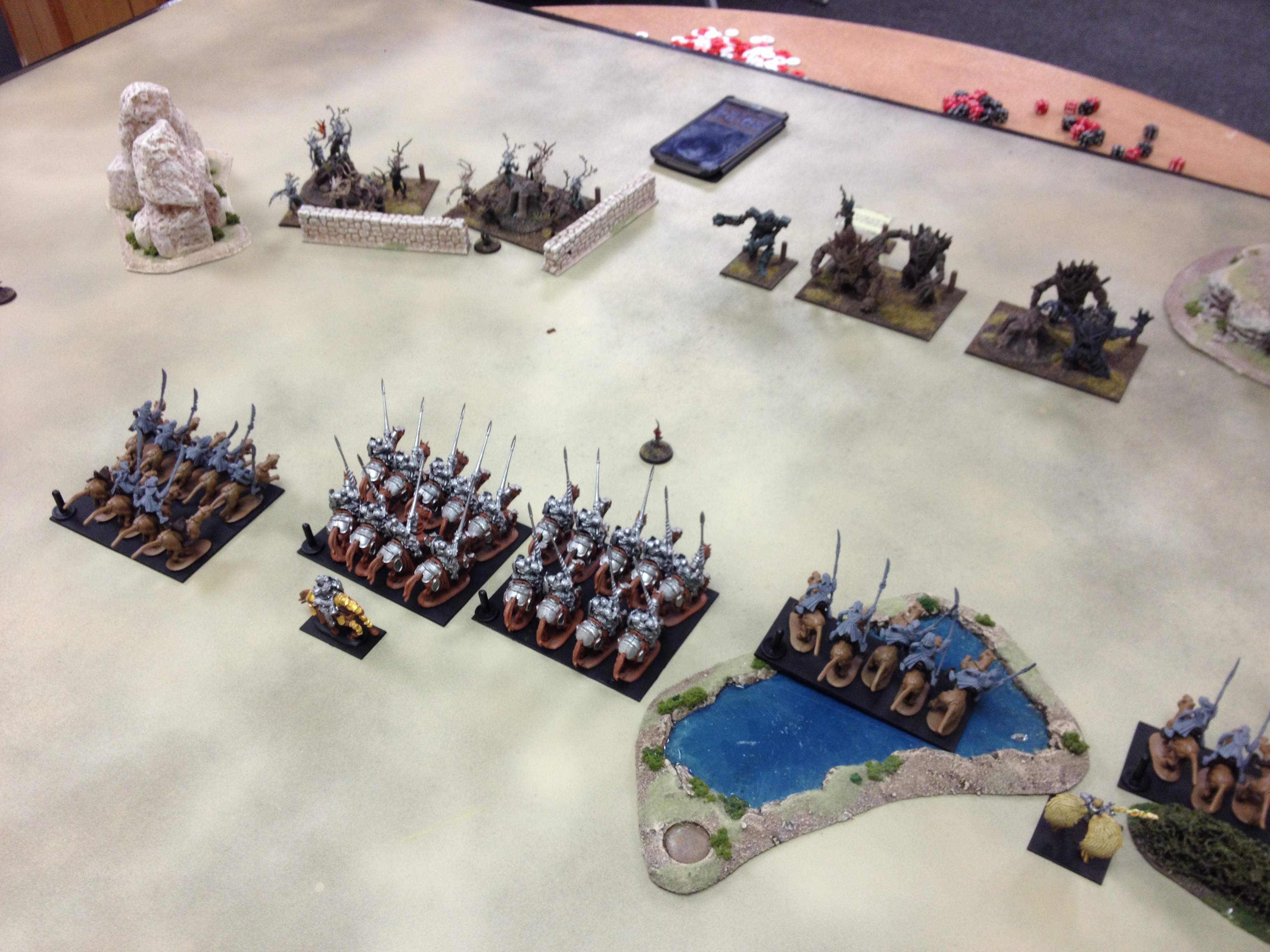 Unfortunately I again seem to have forgotten to take pictures from the end of turn 1 till near the final turns… I will try harder next time!

There were no charges on for Jamie so after a little re-shuffling he switched focus with his bolt throwers onto the Phoenix and Panther Lancer Troop who were lining up to charge his warmachines. The big Budgie survived but the Panther lancers have a particularly low defense and were blown of table!

On the left my Knight blocks smashed into the Forest Shamblers and Tree Herder. The Shamblers died but the Herder hung around for a while.

The turn three counter charge saw Jamie flank the Paladin on my left with some Sylvan Kin whilst attacking from the front with the Herder and King.

After a turn or two I had one the centre and right flanks but still fighting on my left.

Although the game was tipping in my favour Jamie made me work for it! Going into Turn 6 (I think) although I had wiped out most of Jamie’s list he had reduced me down to one regiment of Panther Lancers and one regiment of Paladin Knights plus characters. 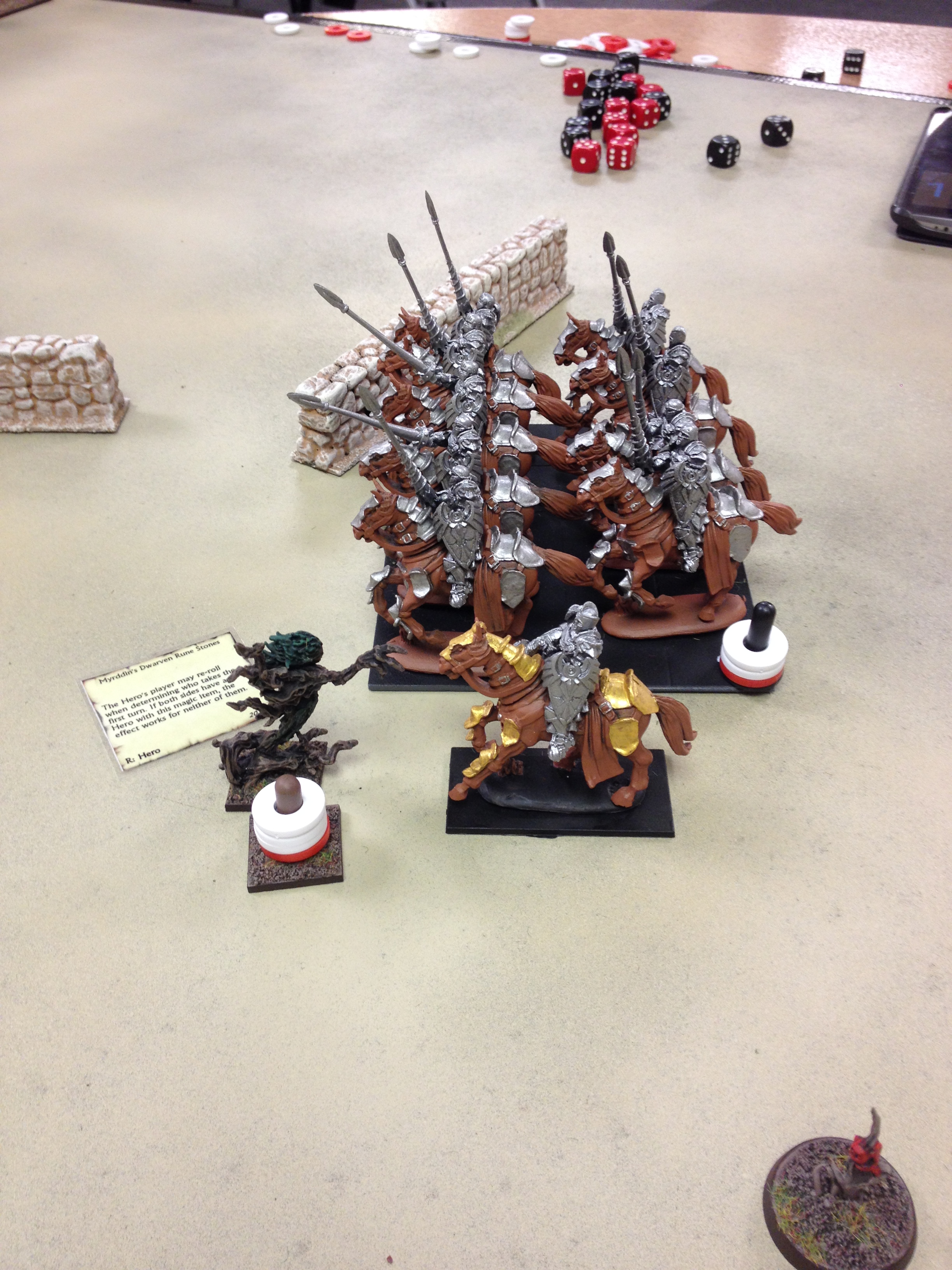 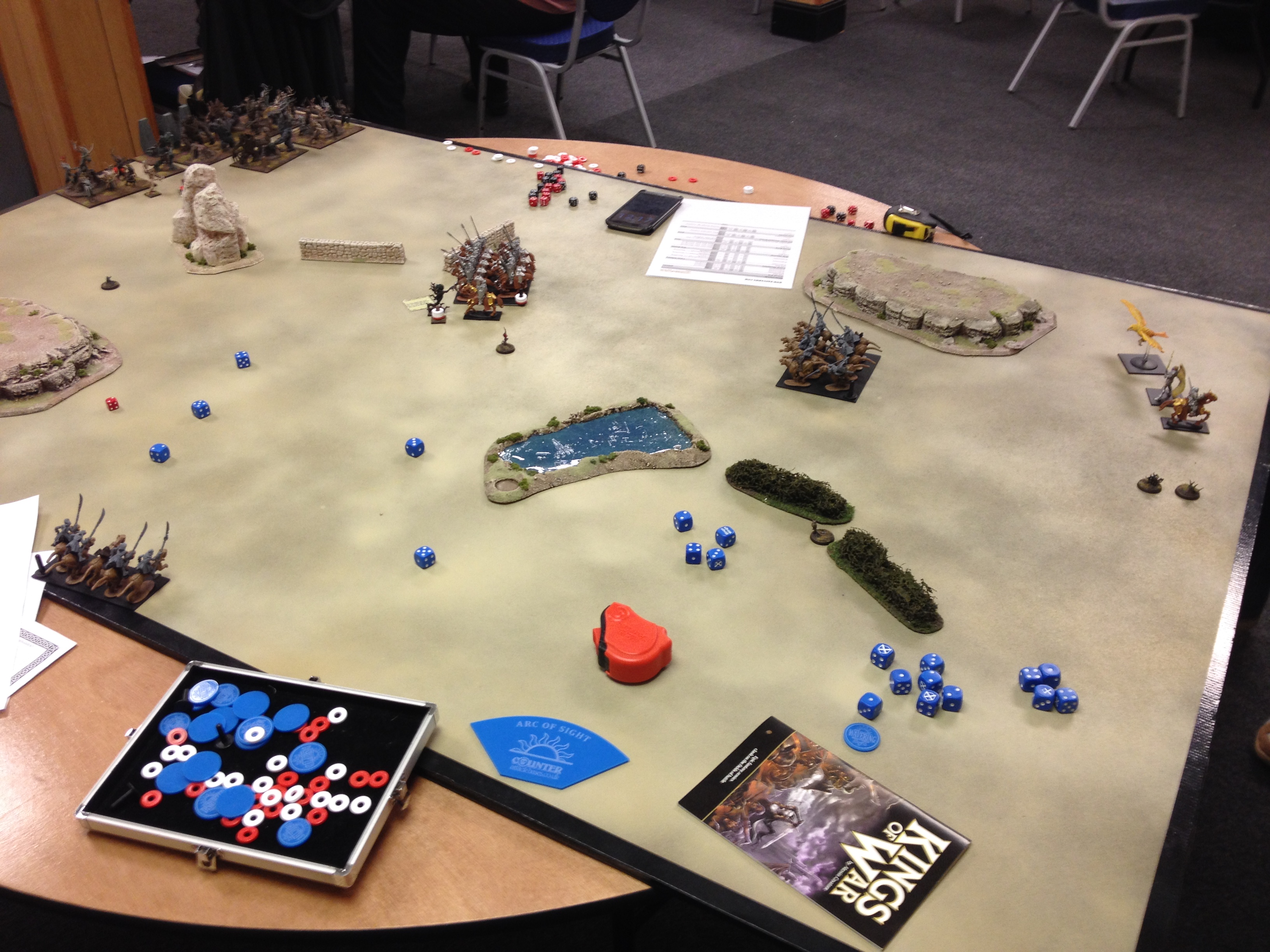 When the dust settled the game ended as a win to me, scoring 1780 attrition points (including 2 objectives) to Jamie’s 715 points.

Combat really went my way in this game and with the lack of shooting got all my units into combat fairly unscathed. Jamie’s counter attack in turn 3 failed to remove many if any of my units allowing me to hit home again.

Tomorrow I will cover the awards (although I came top Staff have to pass all prizes of monetary value down to non-Staff) and a post-event look at my list and the Event in general!