Tale of a King: Clash of Kings Road Trip: Part 7a

Clash of Kings Road Trip: Part 7a – Heading North of the Wall

2nd Regional and this time it was North of the wall and into Scotland! This will be a three parter!

The day started early. I left my house at 4.15am and set off to pick Dave up, I had barely driven a kilometre from my house when the first problem was encountered! Motorway junction closed for re-surfacing! This added a 10-15 minute diversion onto the trip and with the other motorway road works and a badly sign posted car park meant we literally had a mad dash for the Train! But we made it! Figures and all!!

Taking the train would save us 2-3 hours travelling each way and meant I could grab a power nap before and after the Tournament (as I wasn’t getting home till midnight and still had some driving to do back from Doncaster!).

We made good time and arrived in Edinburgh bright eyed about 9.20am. Steven, one of the local, kindly met us as the Station and we headed over to the Store. 6s2Hit is a great little store with enough gaming space for 7 6×4 foot tables and the space to pop up another couple of trestle tables. The shop is well stocked and right in the heart of the city. As we arrived the Staff and locals were just getting the last of the terrain out. Each row of tables had a flat screen that we could have used for Event timing and round draws but instead we opted for a slide show of product as all the event admin was being done manually as it was just as quick with a small event. 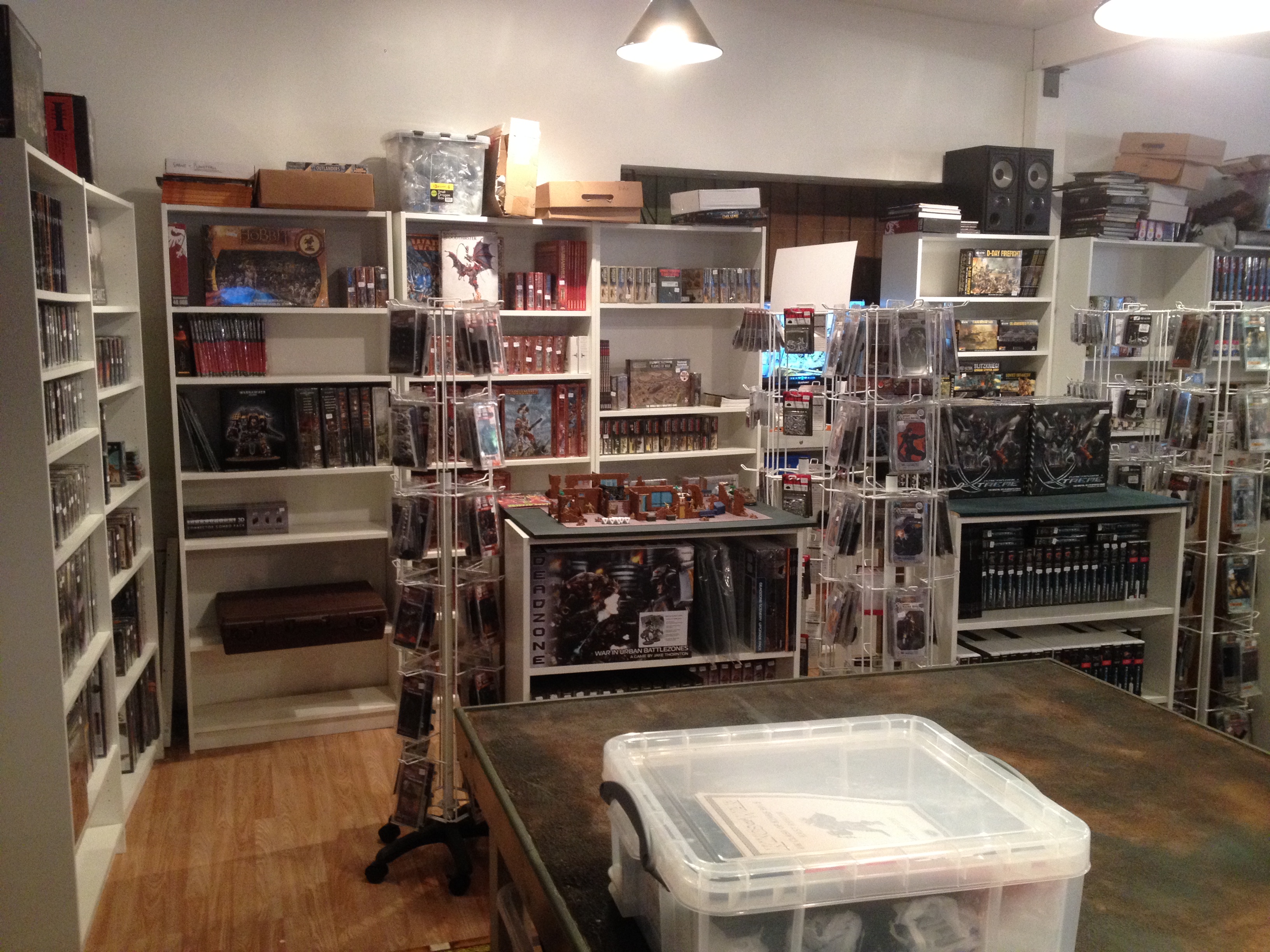 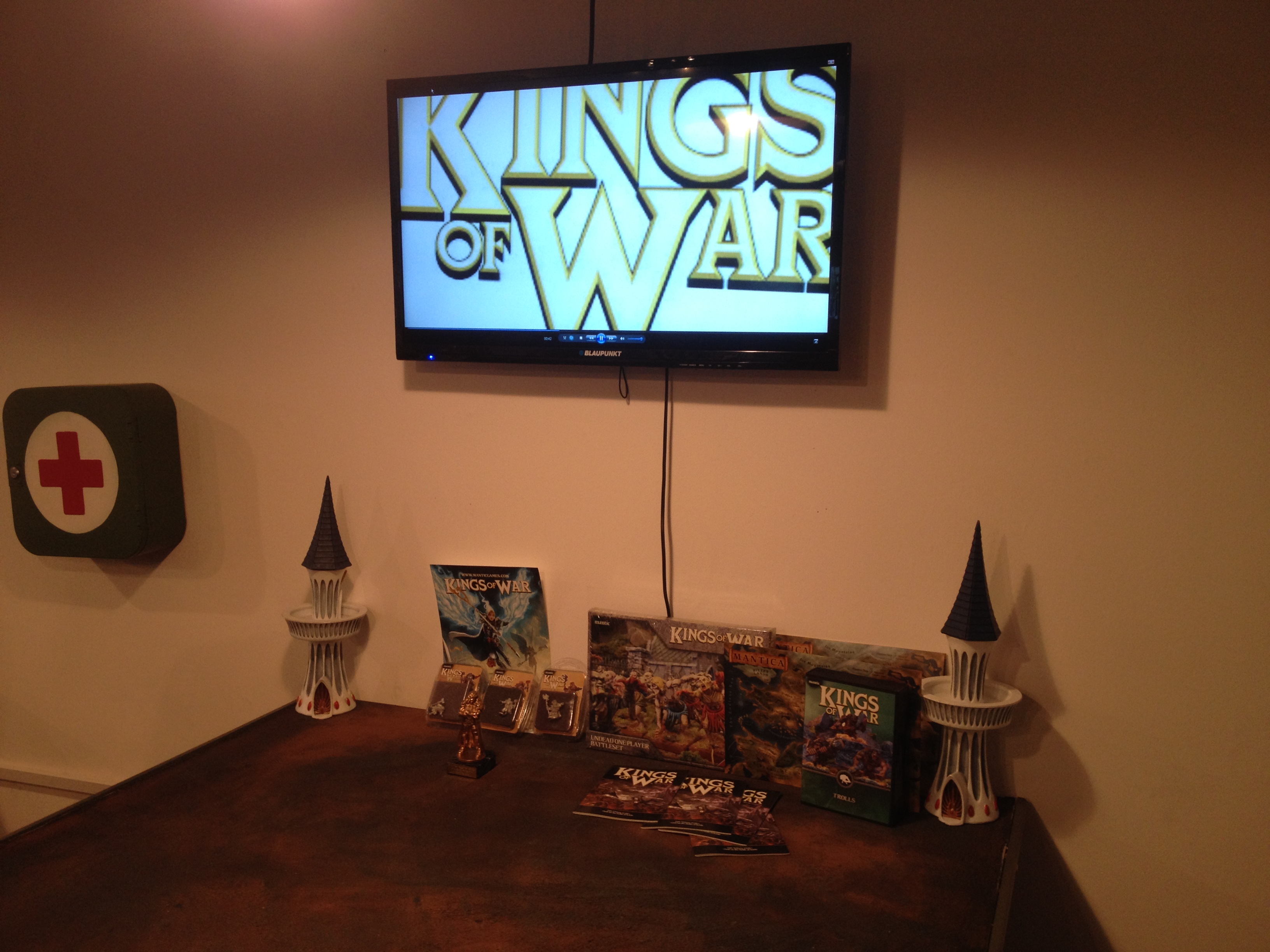 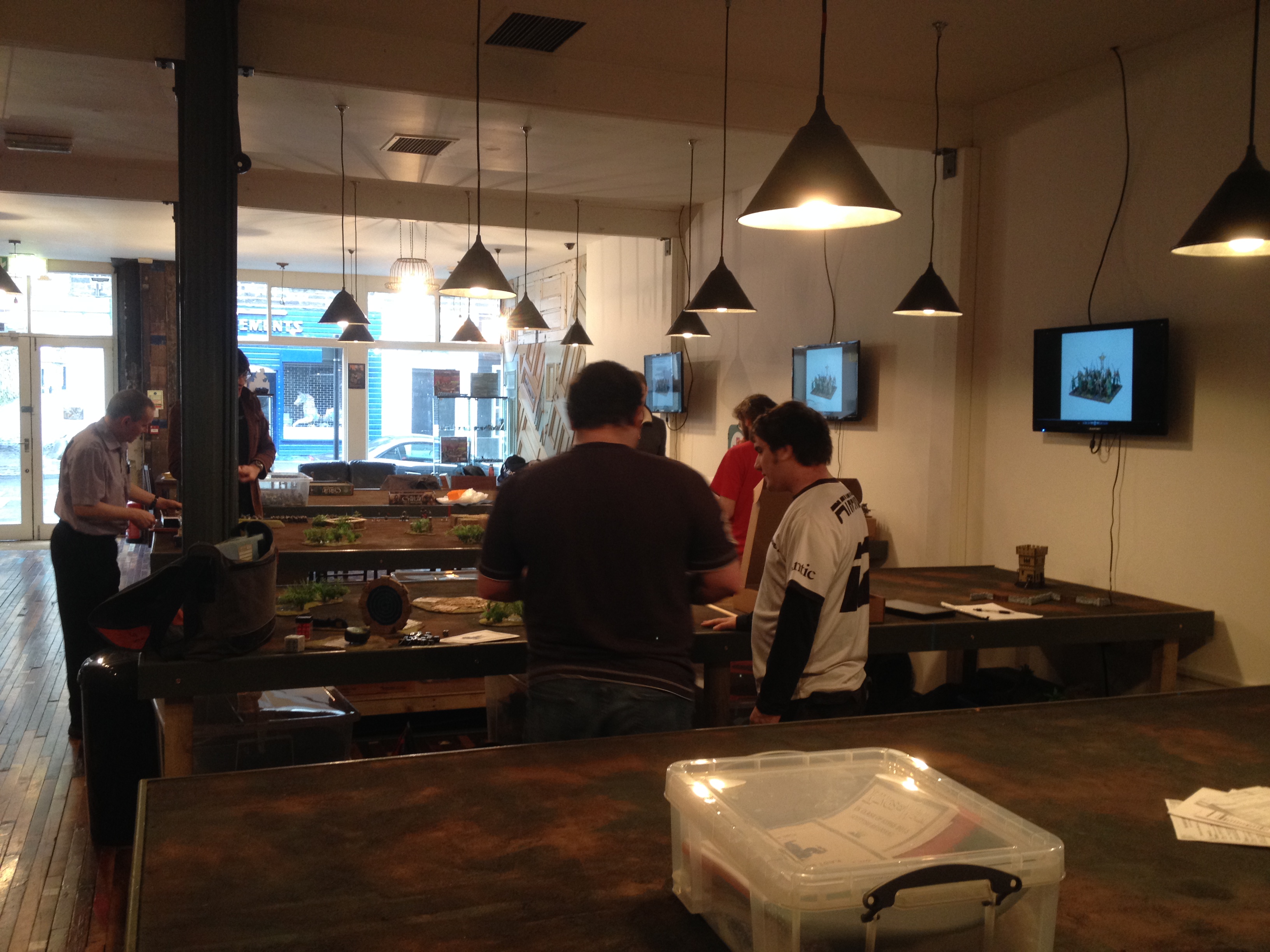 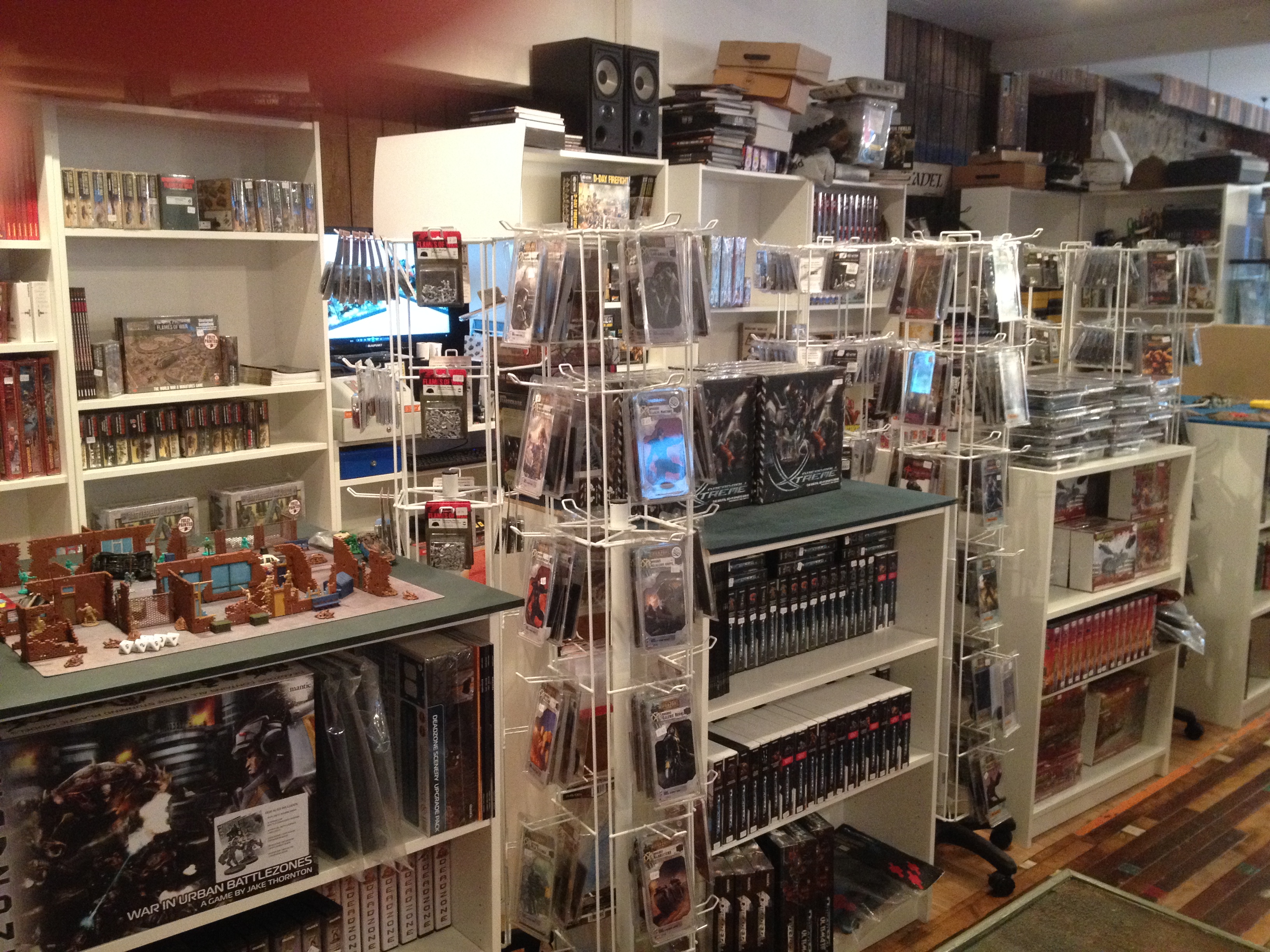 At registration we had 1 drop out leaving us on 7. We had planned for this and Dave had brought up his demo copy of Dreadball Xtreme. I volunteered to sit out Round 1 so I could check over the army lists and give Dave a chance to get his Ogre’s bloody before showing off Xtreme to the locals. We formed ‘Team Fighting Mongooses’ (the name of the Stand-in player) and would play one game each with a surprise for the 3rd and final game!

I paired up the six players using a dice off and they kicked off their first round games. I am also happy to report that all the lists were correct! 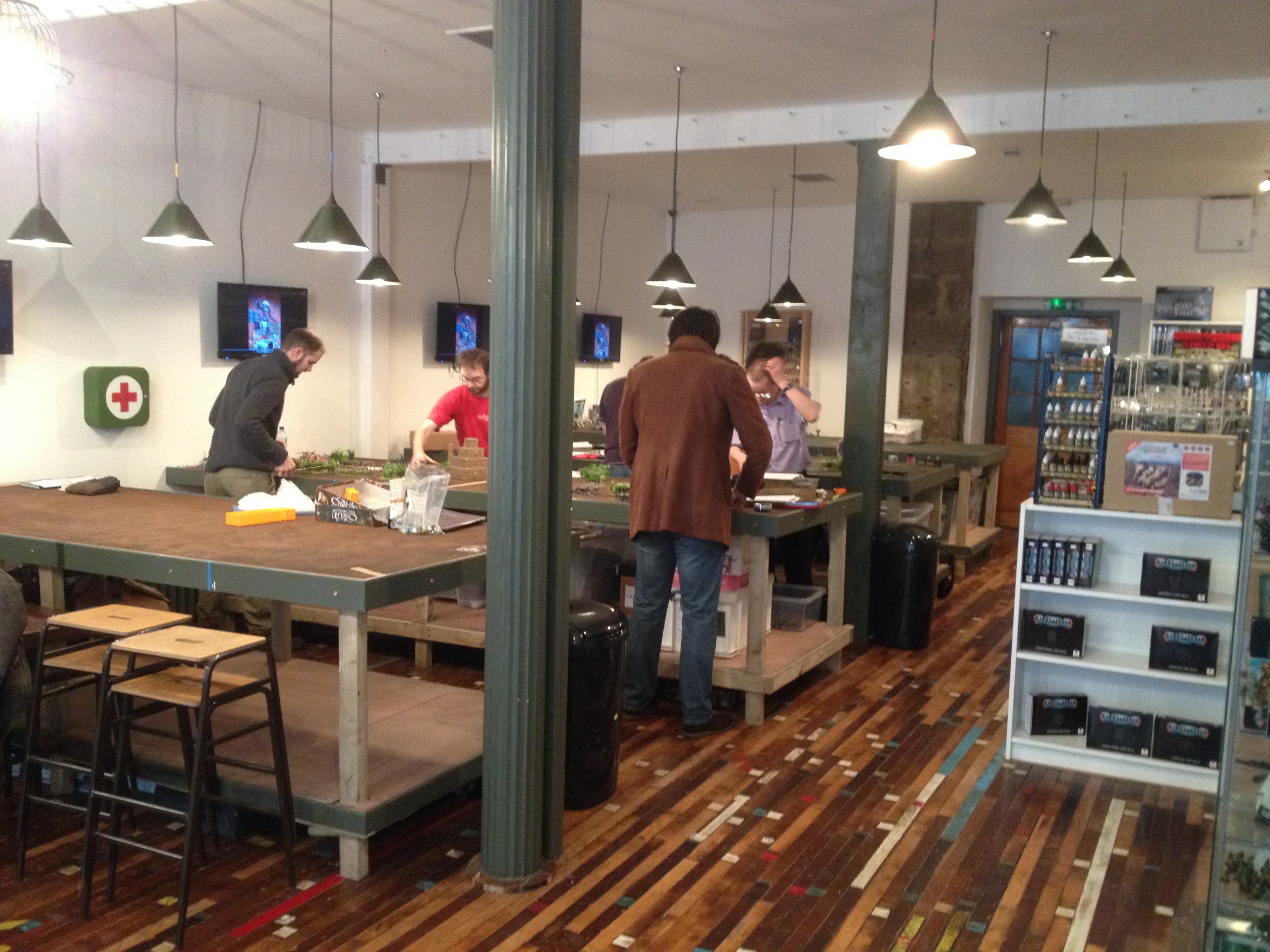 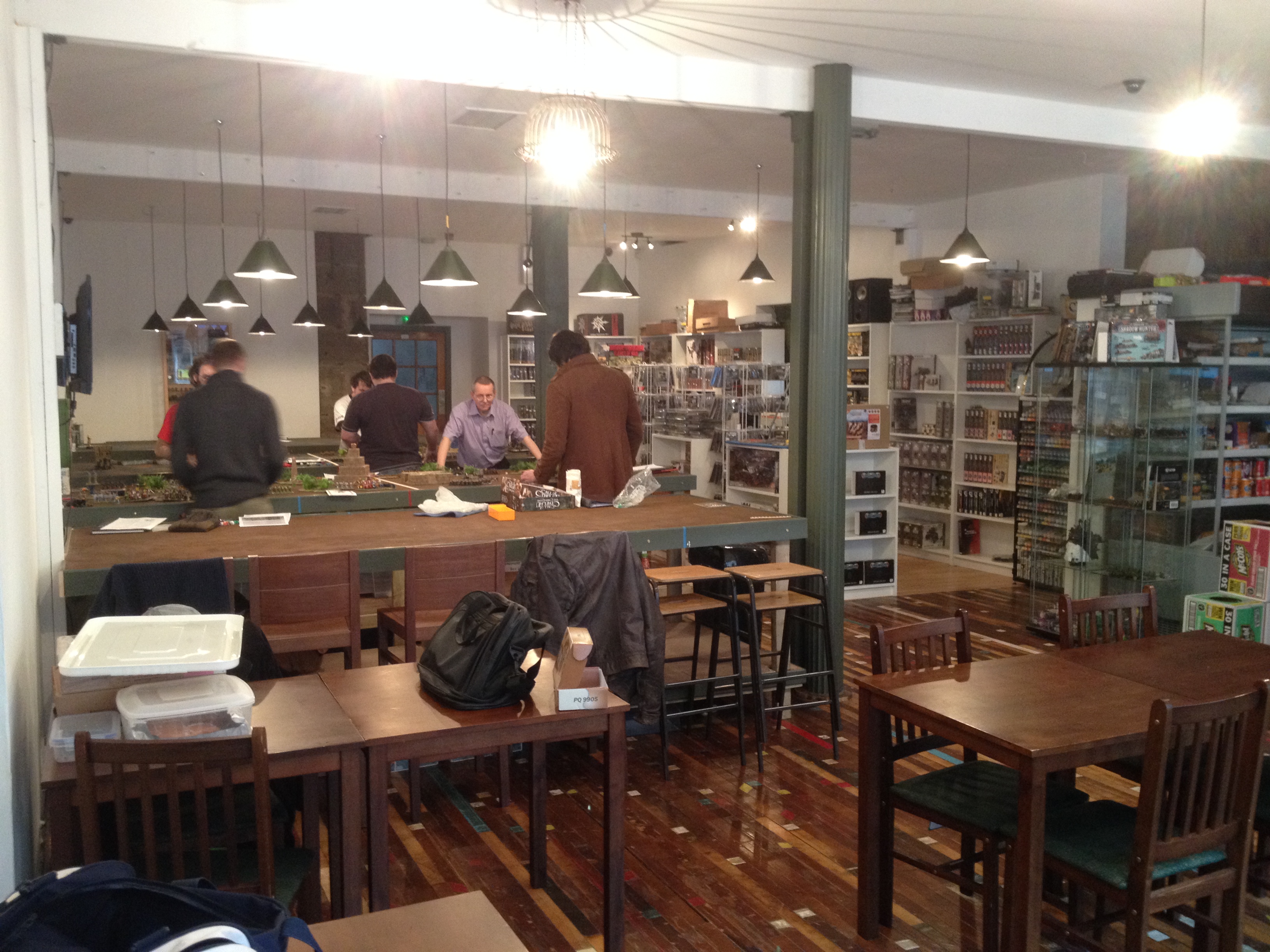 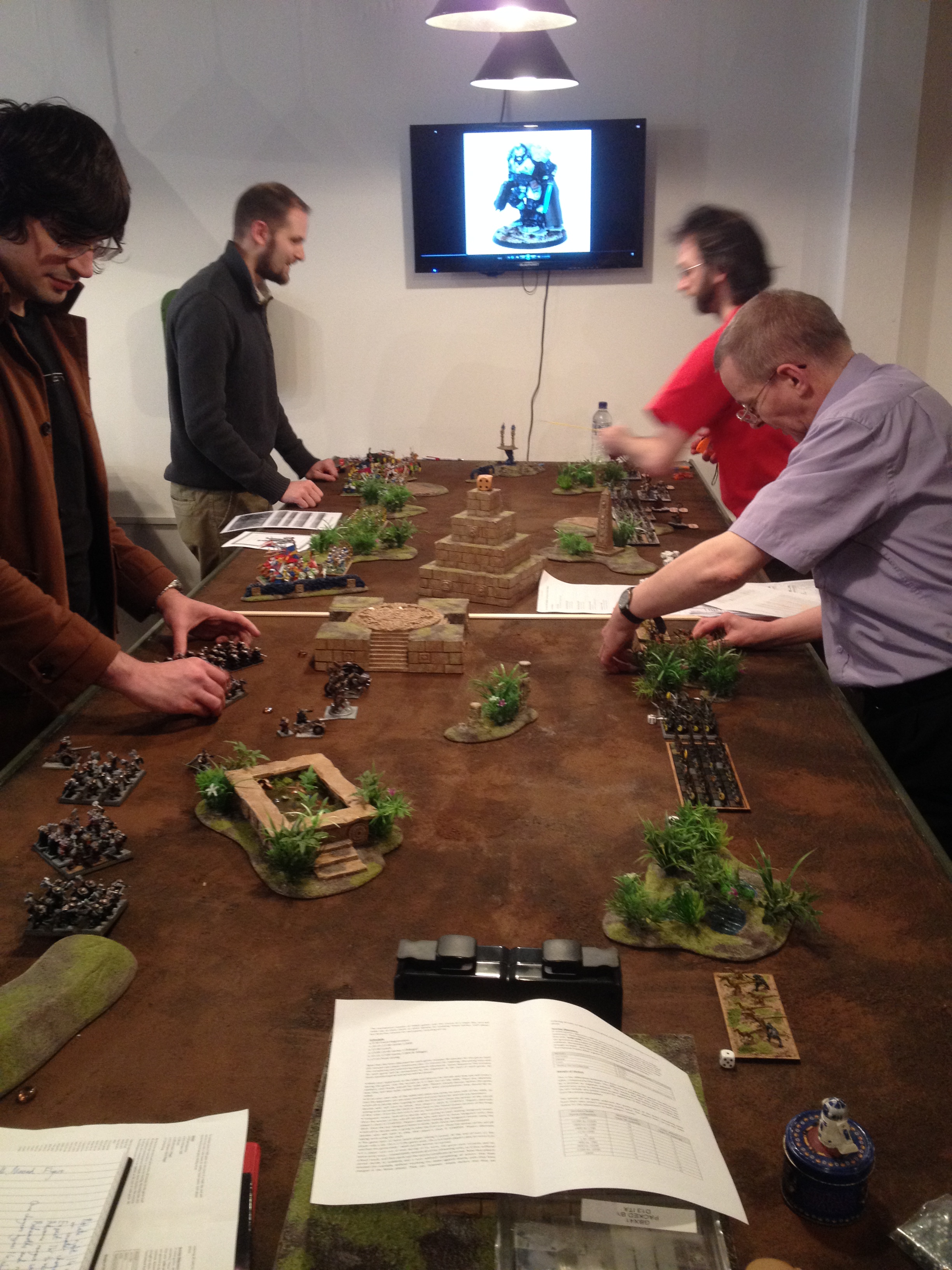 Dave and his Ogre’s drew Steve Bonnar’s Dwarfs first round and was soon getting peppered by cannon fire, losing the Chariot Regiment in the first turn! Dave, fresh from his wooden spoon at the East Regional, doesn’t get on with his dice! He cheerfully exclaimed to Steve that the Goblin Blaster did 2D6 damage after it charged in… the excitement was short lived after he rolled a 3… in total! 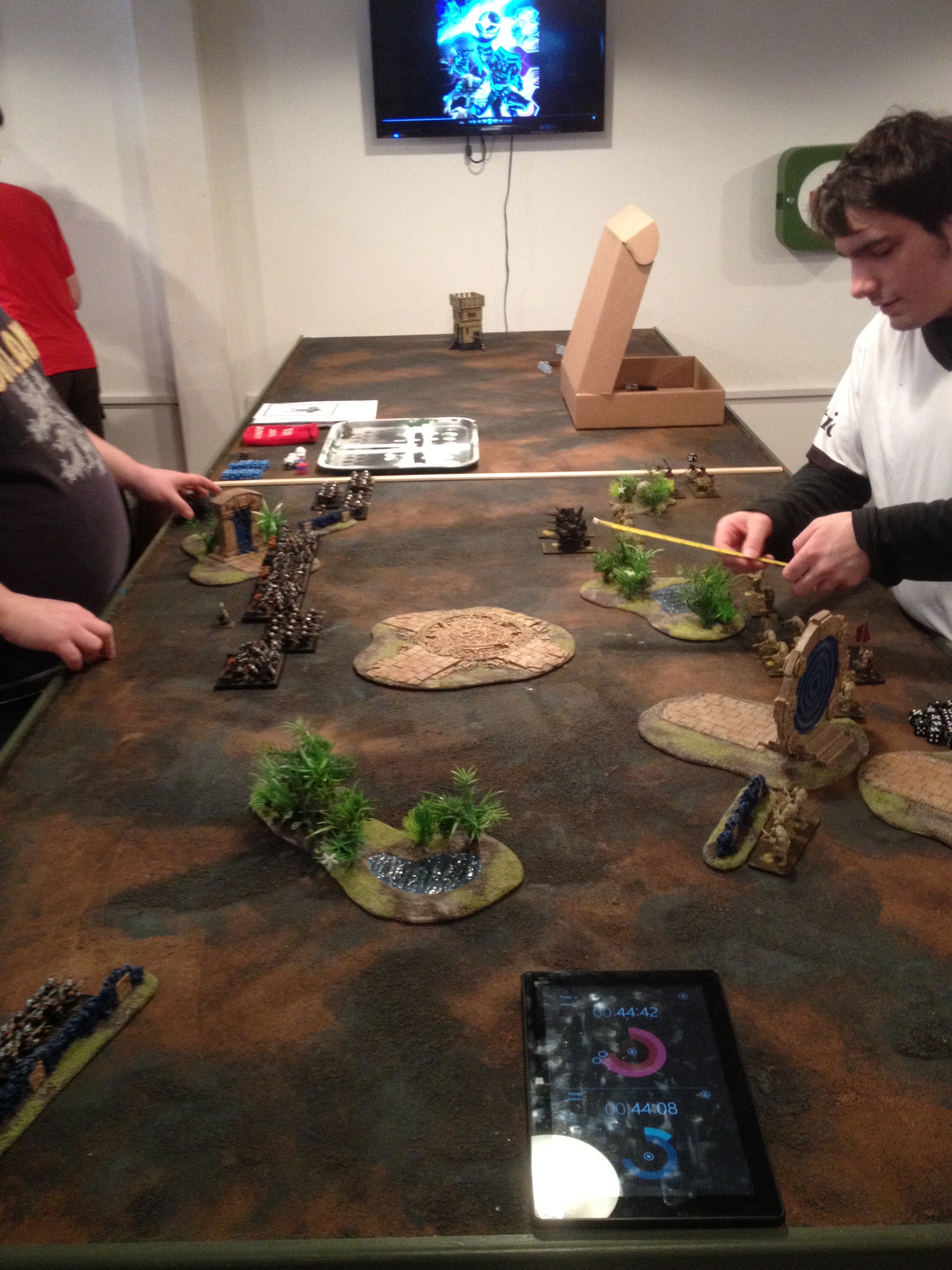 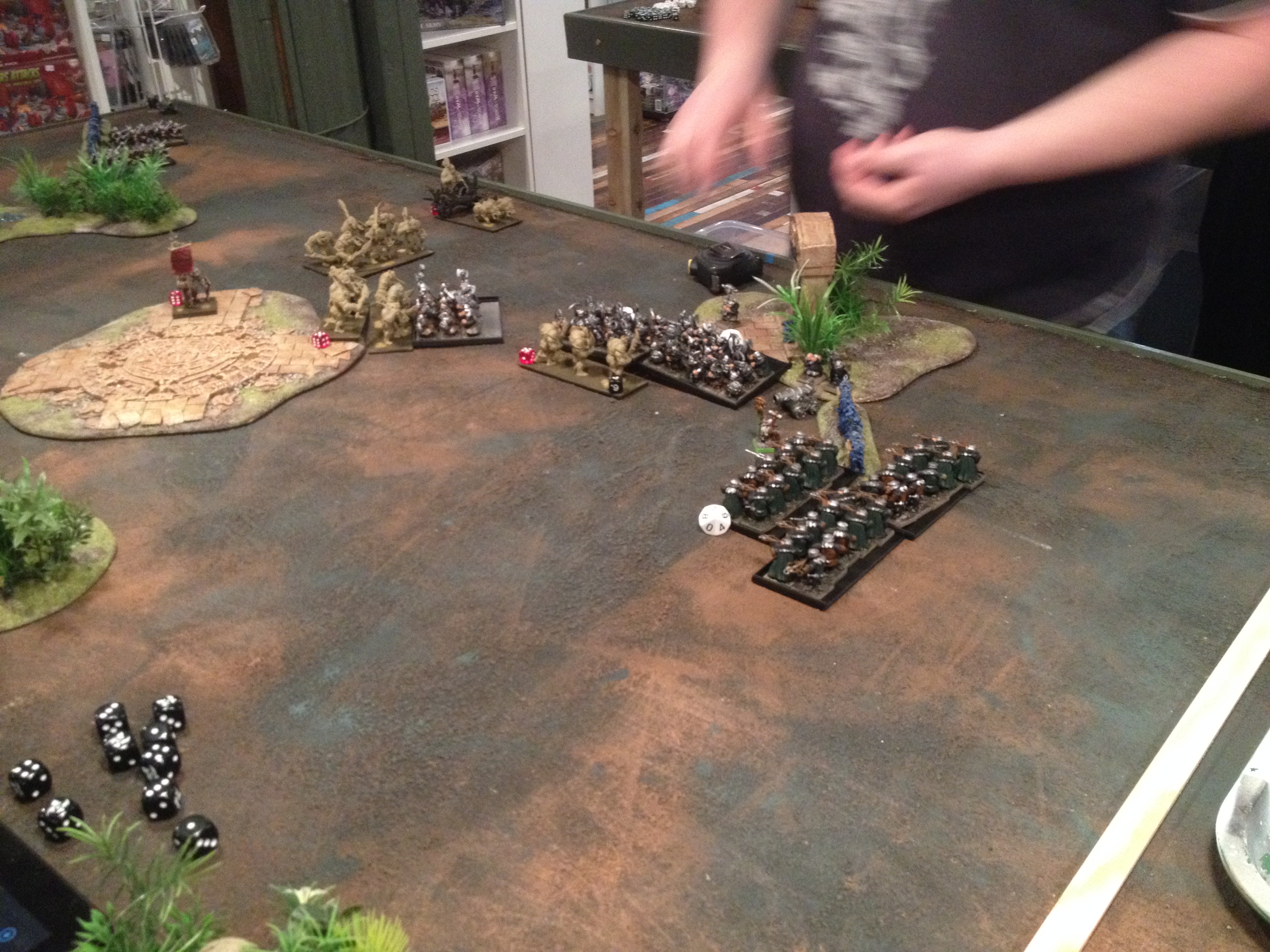 Still – he got his ogres across the board into combat but the damage had been done by the stunties on the way in and he walked away with a 3-17 loss.

On table 2 we had Andy Meechan’s Undead versus David Longbottom’s Basileans. This ended in a perfect 10:10 draw – even a dead heat on attrition with each player killing 770pts of the others army! 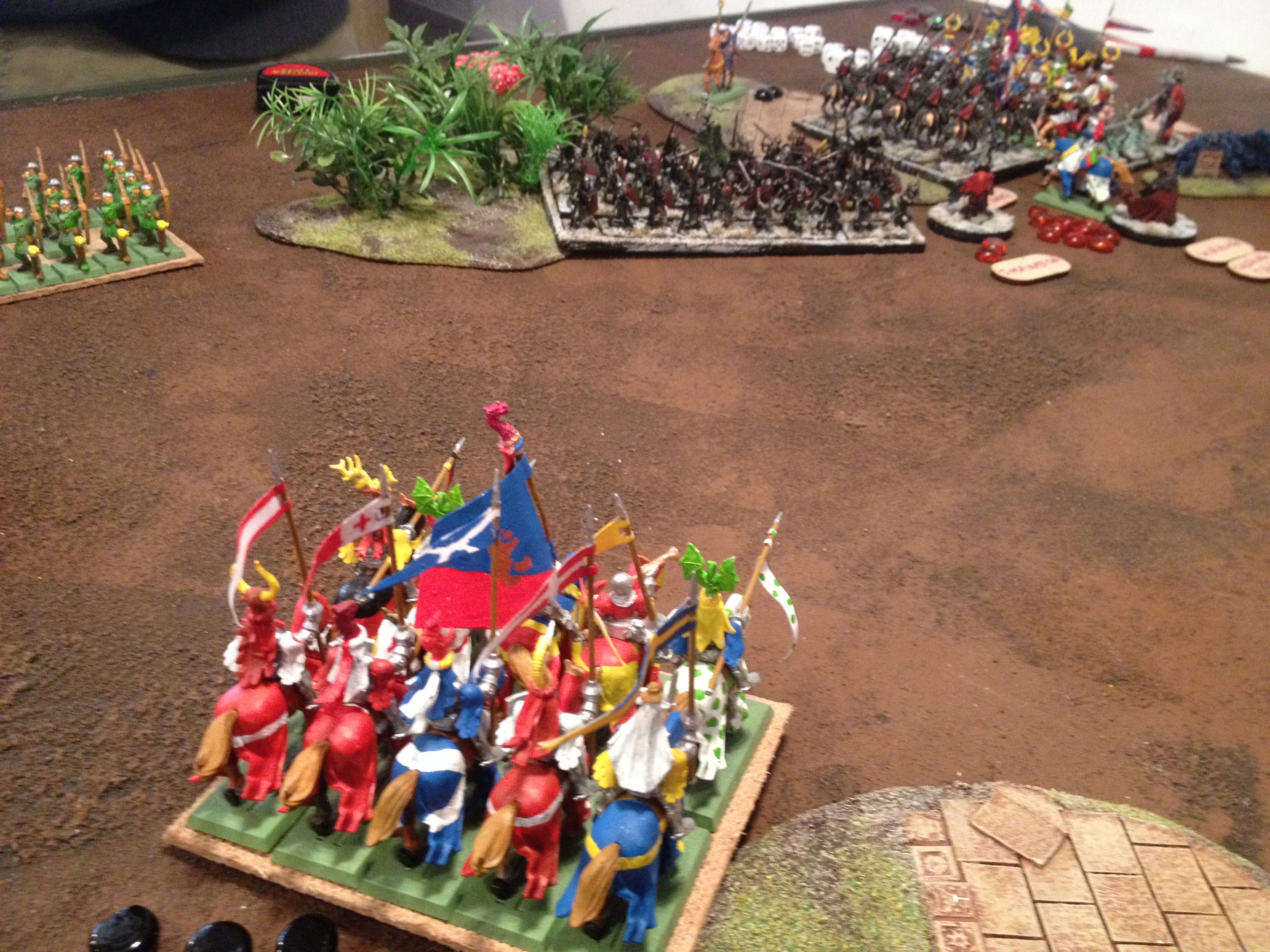 The final match up was David Young’s Goblins versus Richard Rimmington’s Dwarfs. Richard won this 17-3. 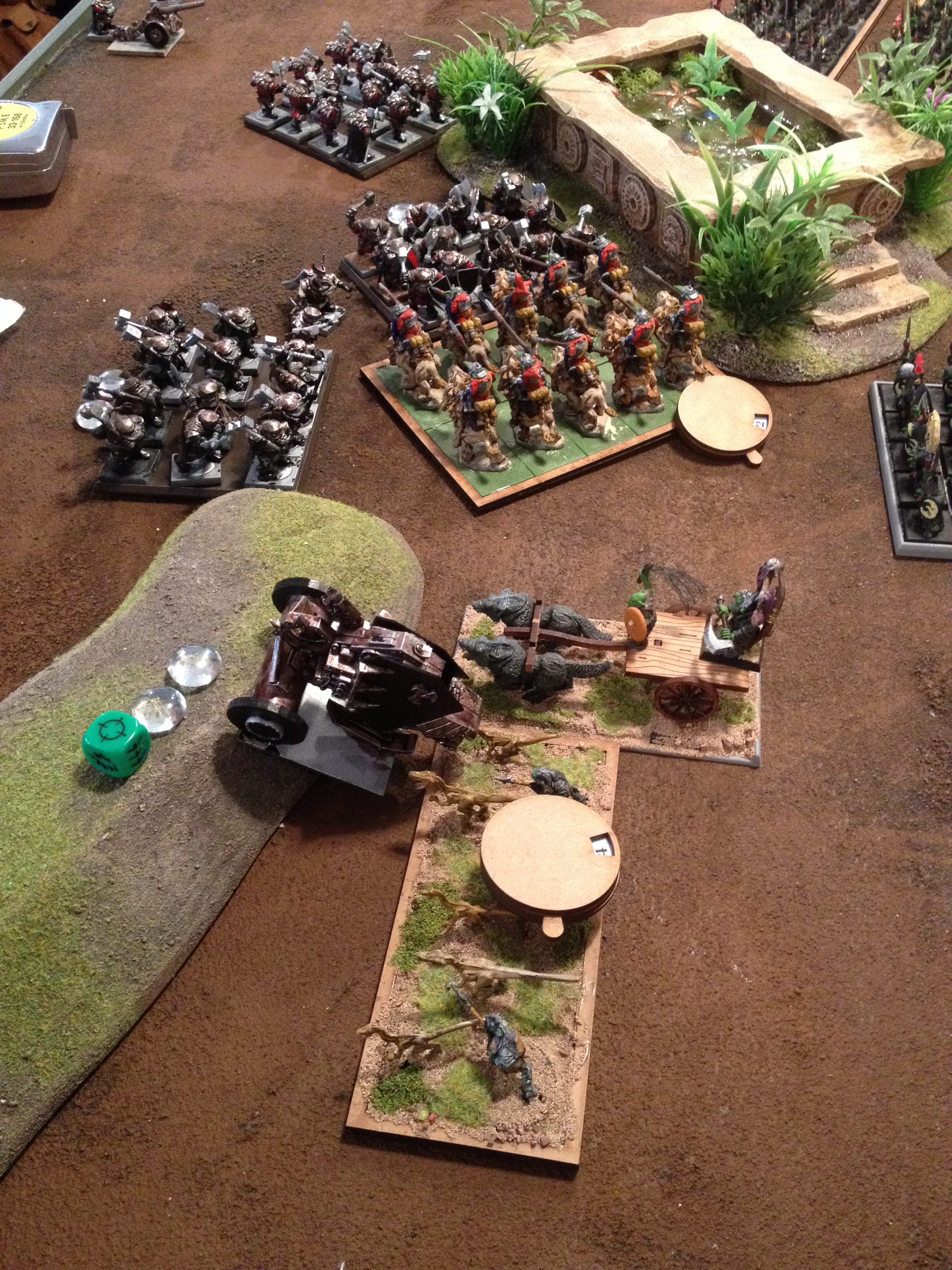 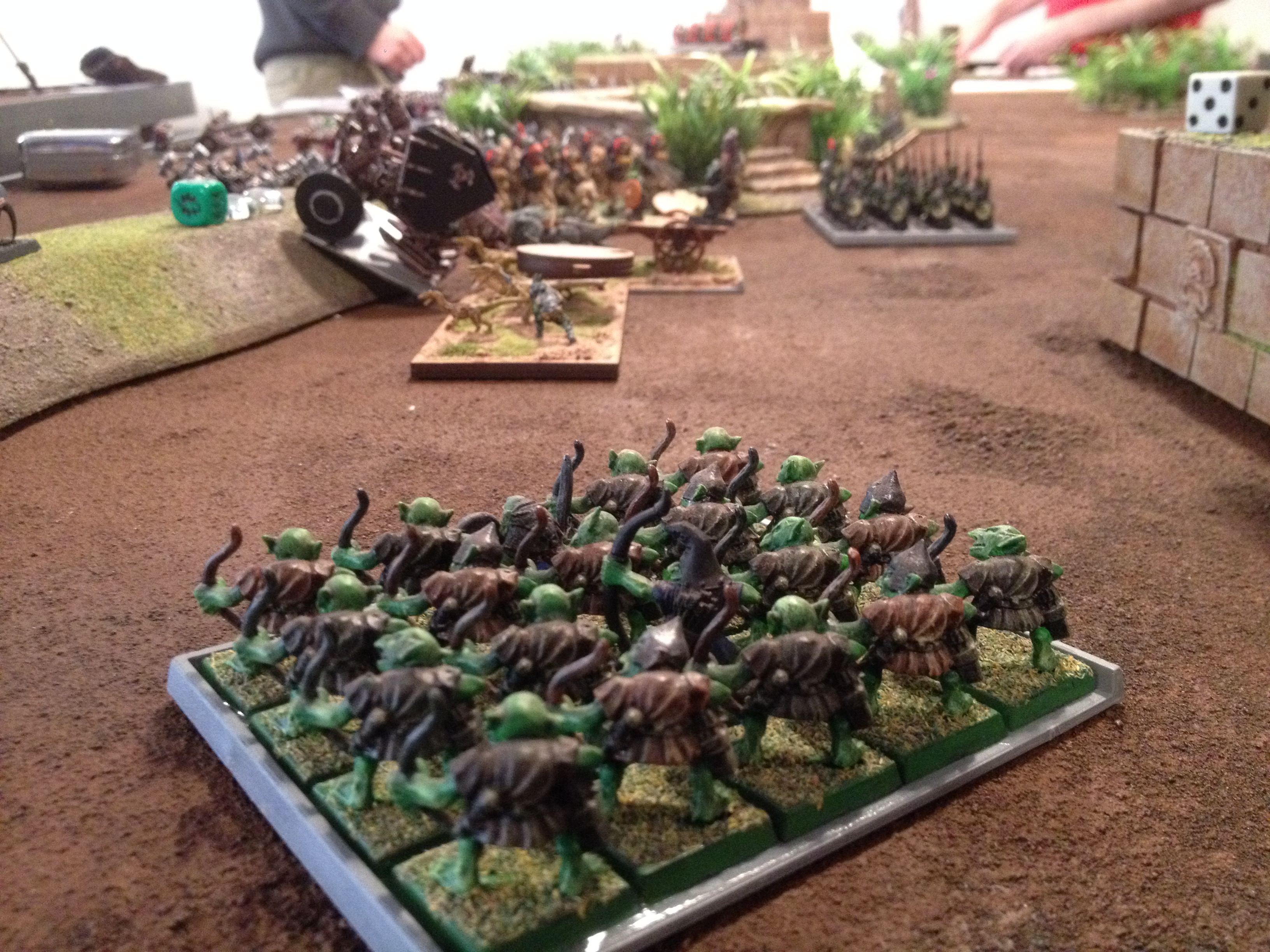 At the end of Round one we have two players on 17 point wins, two on 10 point draws and two on 3 point loses.

But now I was subbing in for Team Fighting Mongooses… find out how round 2 goes tomorrow!