Tale of a King: Clash of Kings Road Trip: Part 7b

Clash of Kings Road Trip: Part 7b – Tagged in for Round 2!

Before I get into my the game and my opponent’s list I have tweaked mine a little. I’ve moved the Sword of Slashing from the High paladin to the Ur-Elohi as he’s more likely to get into combat and with the 3+ melee and crushing strength 3 make better use of the additional attack.

Really paid off in Game 3 but that’s for later…

Now I’m in off the sub bench for Round 2 at the Scottish Regional!

So after the Fighting Mongooses lost round 1 we found ourselves playing David Longbottom’s Basilean Army. David had drawn round 1 vs Andrew Meechan with a perfect 10:10 draw so I had to split them up so they didn’t have to play again. David’s list had 3 Units of Knights like mine but otherwise quite different with lots of Crossbows.

David had taken two magic items in particular I was a little wary of. The Jar of the four winds gave his Crossbow Horde +12″ range meaning they had a short range of 18″ and an impressive long range of 36″. The Brew of Haste gave his Paladin’s +1 movement which importantly meant they could out range my own Knights on the charge.

After meeting, greeting and exchanging lists we discussed the terrain and as the game was Pillage deployed the 6 objective markers (Blue acrylic you can see from Counter Attack Bases). 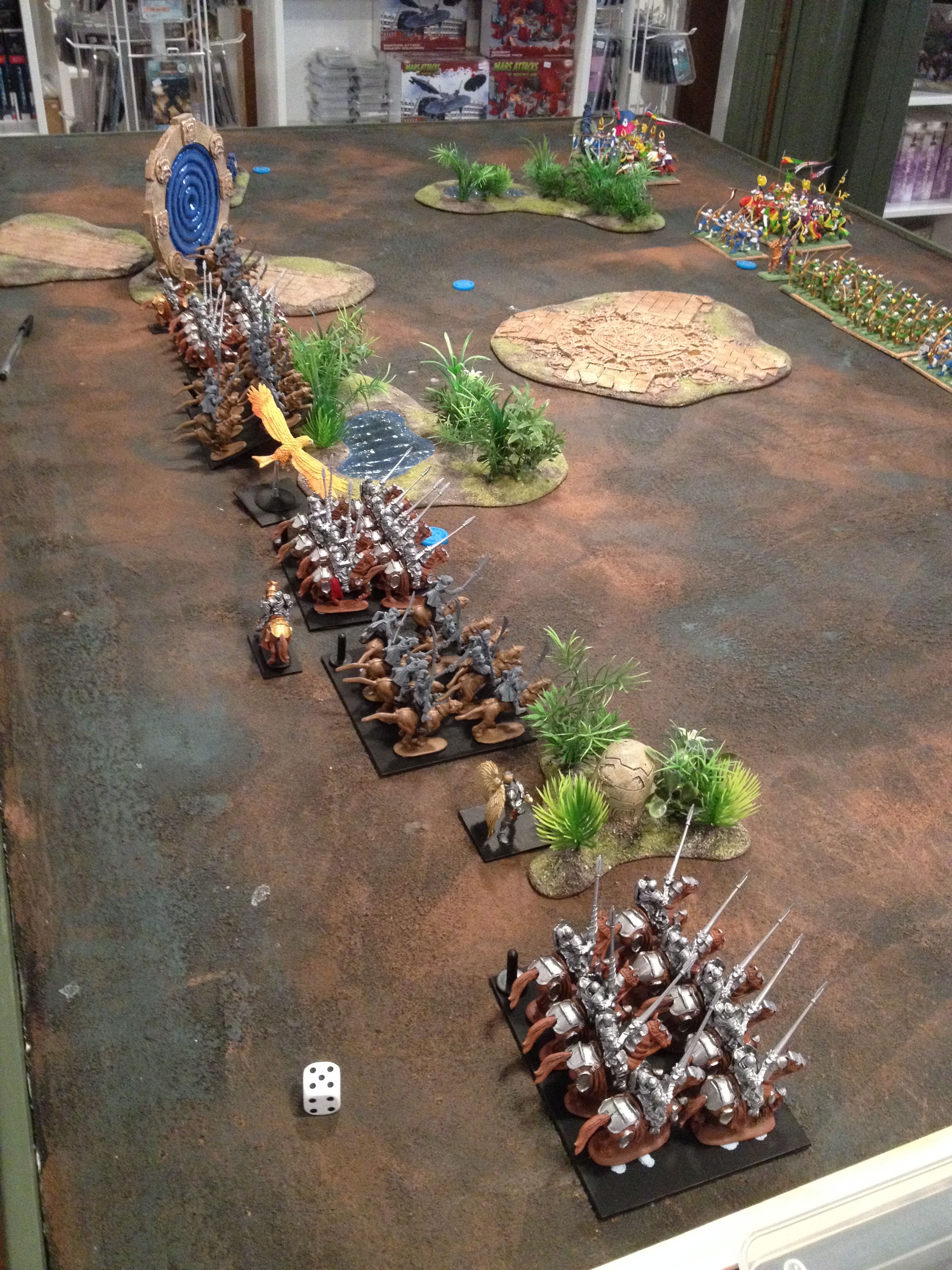 I tried to face off some Panther Lancers against David’s +1 Movement Knights and ignored the unit he placed on his right flank behind the wood. I would concentrate on the rest of the army and worry about them later. I needed to close the gap and shut down his shooting as quickly as possible. 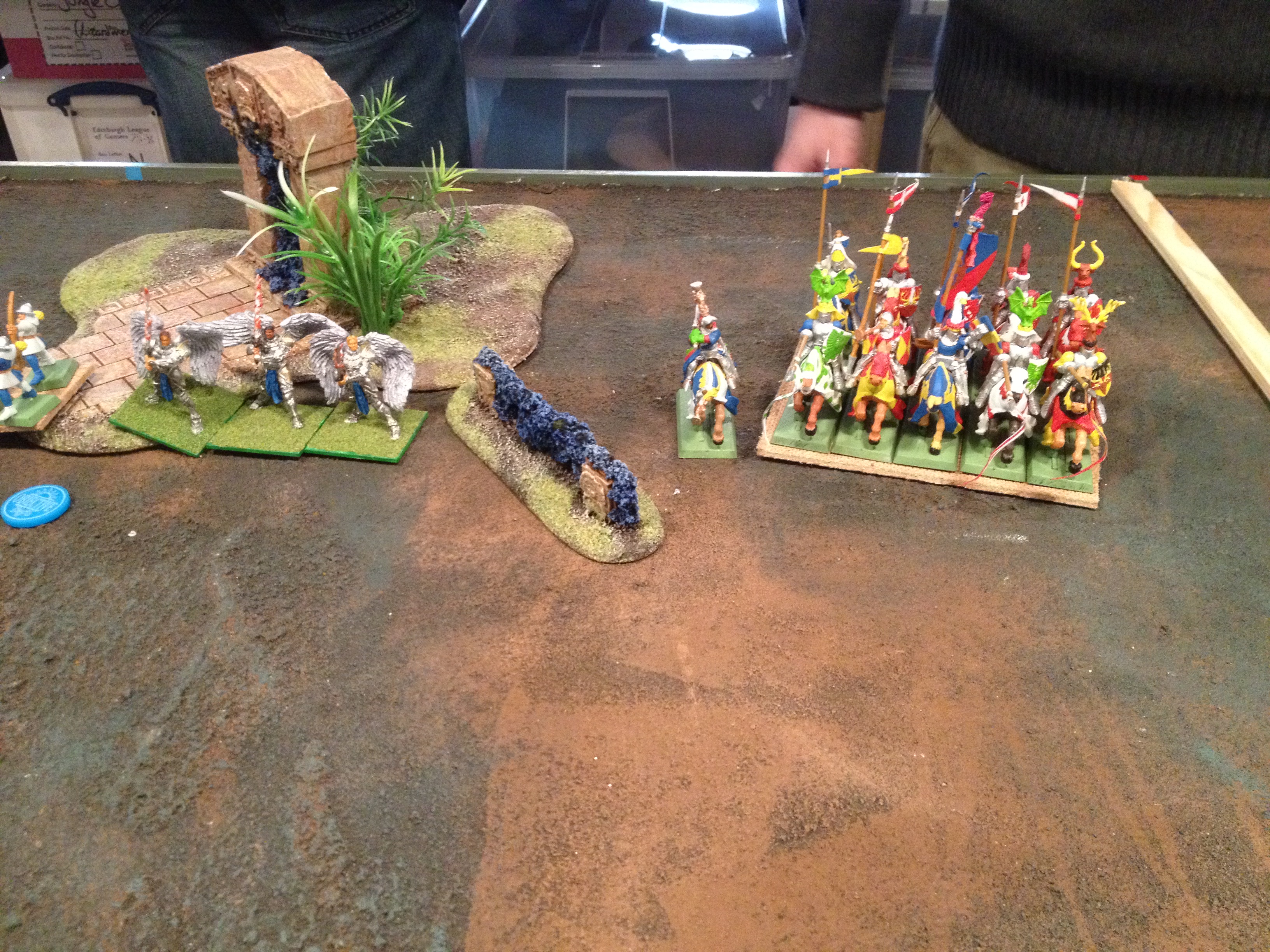 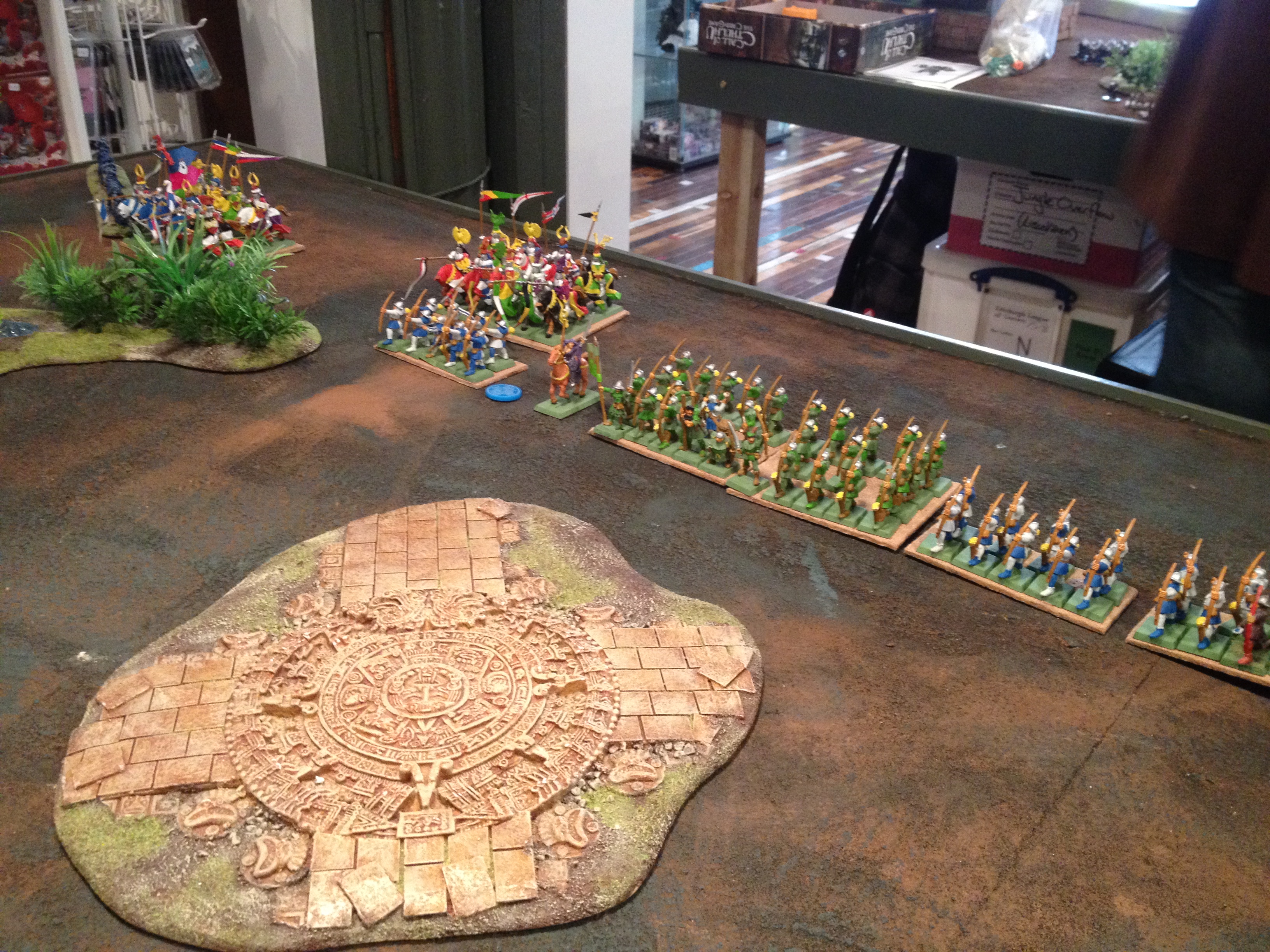 The unit of Paladin Knights behind the archers in the centre had the +1 Movement. We classed the large paved piece of terrain as decorative so wouldn’t be slowed moving across the board.

And so the two Basilean forces faced off across the table… 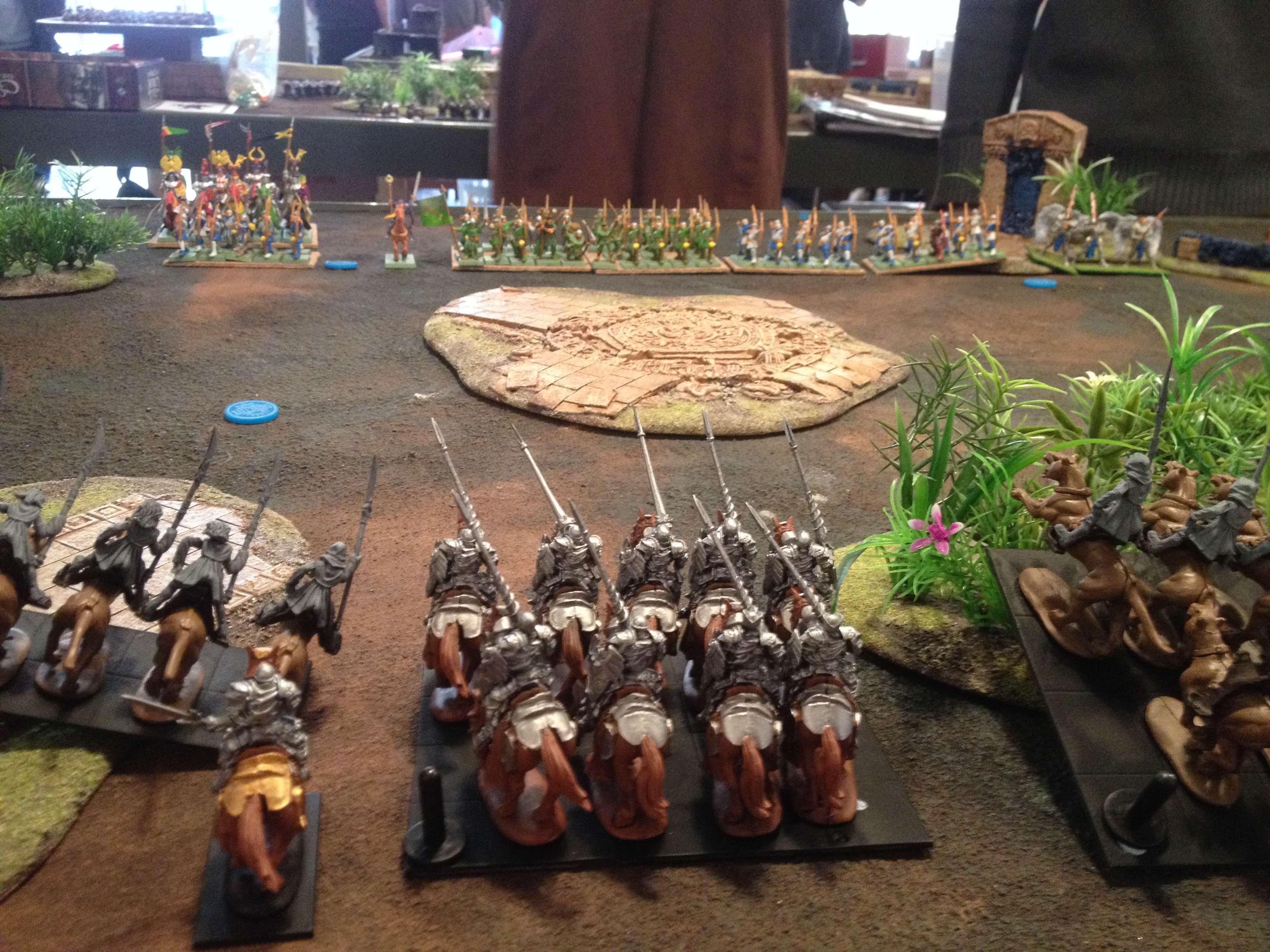 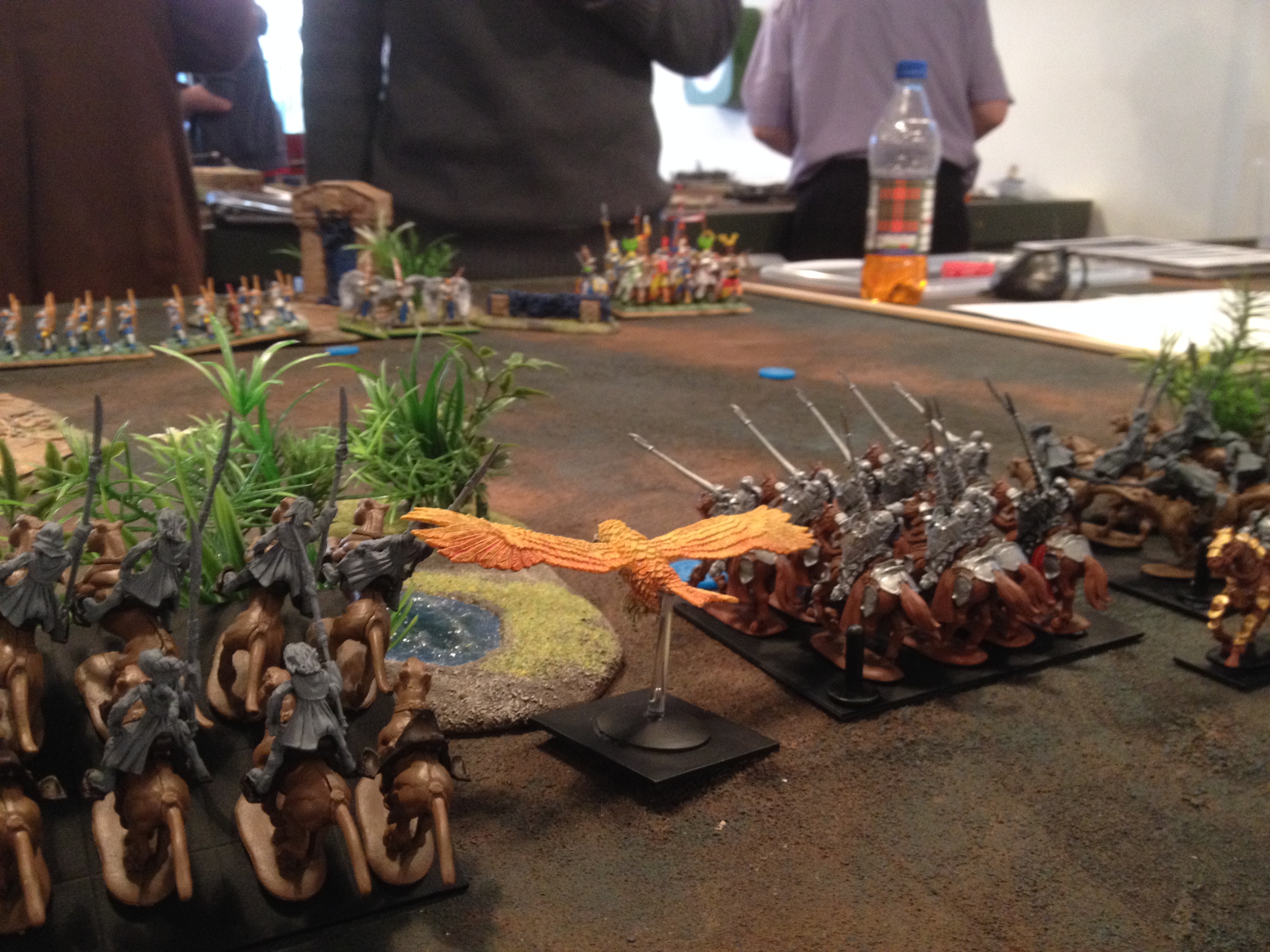 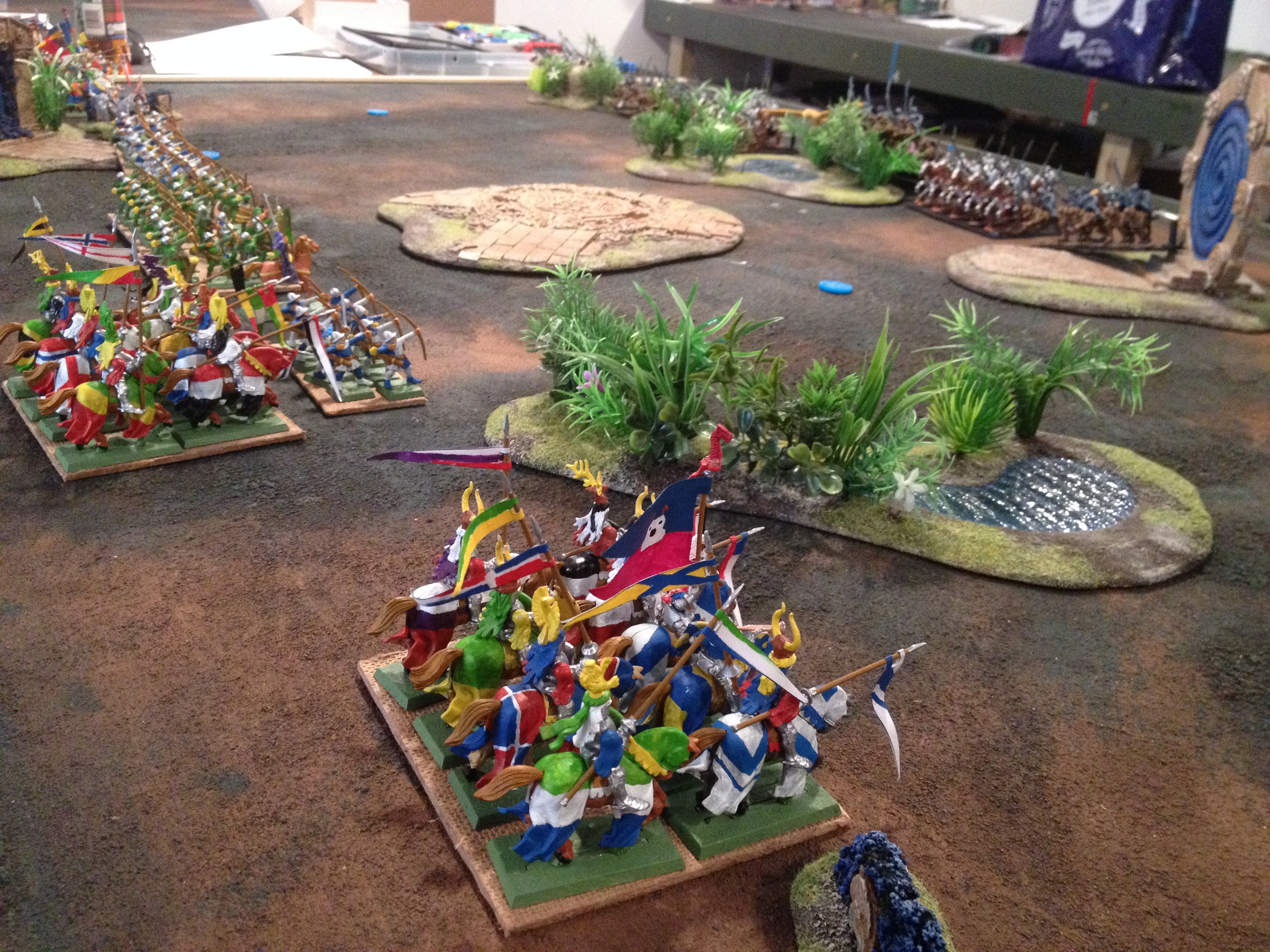 I won roll for first turn and moved everything up. I made sure I was just out of charge of both units of David’s Knights but close enough that I could charge into some crossbowmen in my Turn 2. Worse case scenario I could disrupt them so they couldn’t shoot. 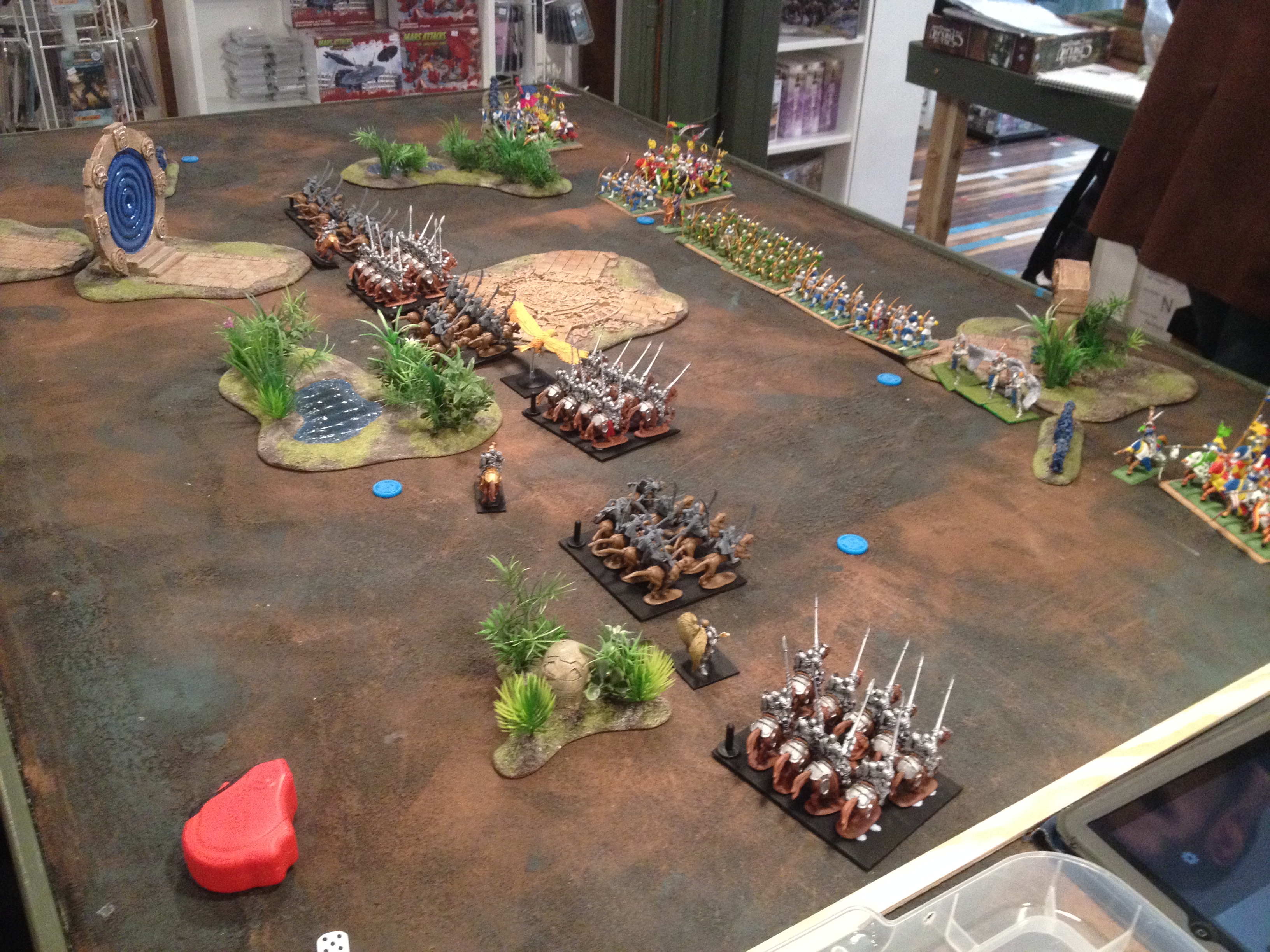 With that all double checked I ended my turn…

…but I had left a small opening… 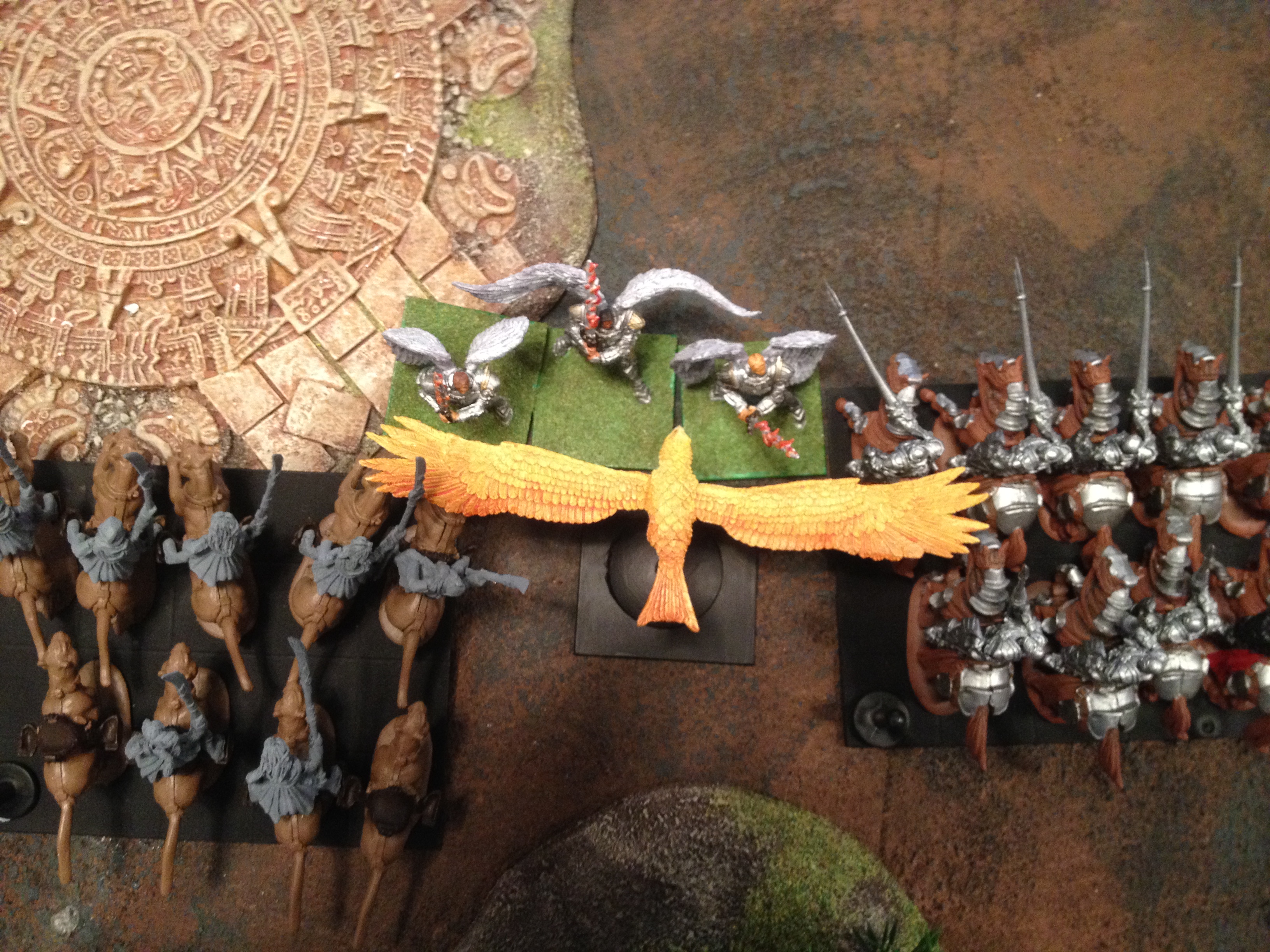 David took the opportunity to charge my Phoenix. I hadn’t pushed my Panther Lancers up far enough to block his charge meaning he could send the the Elohi over to batter my Budgie! Thankfully for me they wiffed a little and the Phoenix remained standing.

David peppered a few unit’s with long range shooting. I think I may have lost a Panther Troop to some long ranged 6’s but otherwise unscathed. 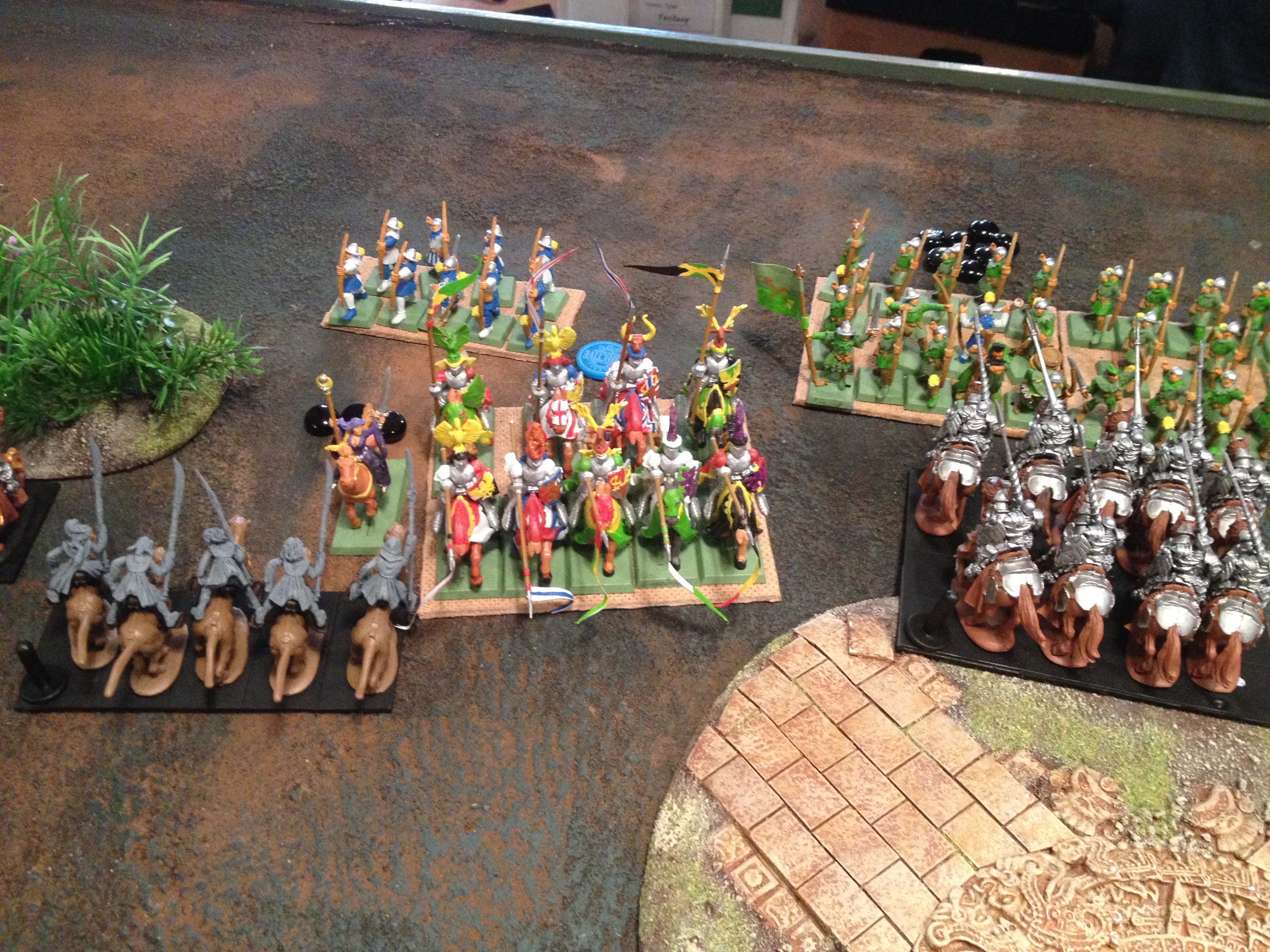 In the centre I got a charge off with the remaining Panther Troop into the War-wizard and Knight Regiment went into the Horde. Both did damage but failed to waver or rout.

On the right flank I sent my Ur-Elohi and Knight Regiment into David’s Knights routing the unit in one go even with the inspiring re-roll. 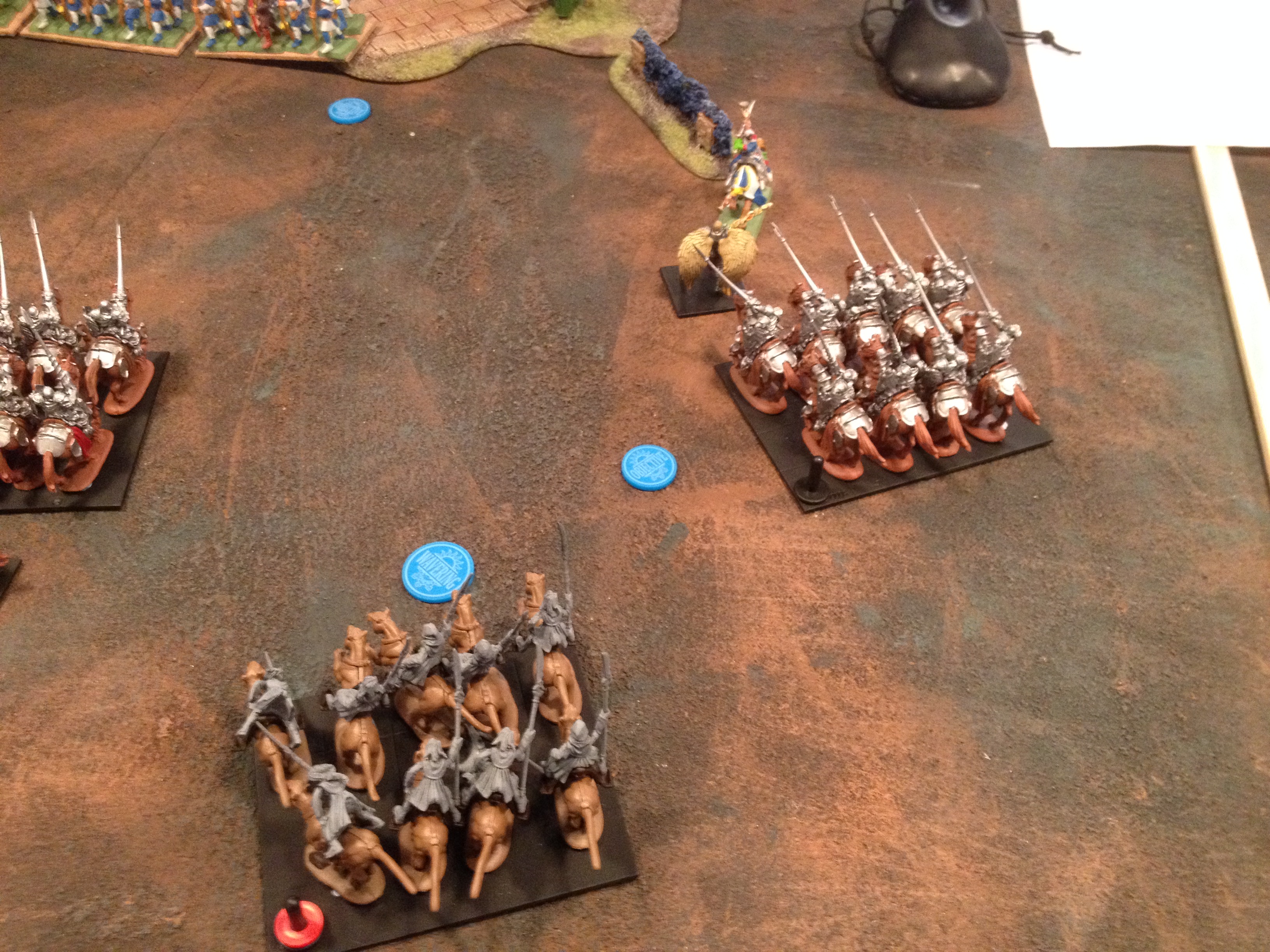 In my right-centre the Panther Regiment, Phoenix and Knight Regiment charged into and saw off the Angel’s. They are too good to ignore or take on half hearted with their decent melee and crushing strength. I then lined these unit’s up for turn 3 charges to support the advance units. 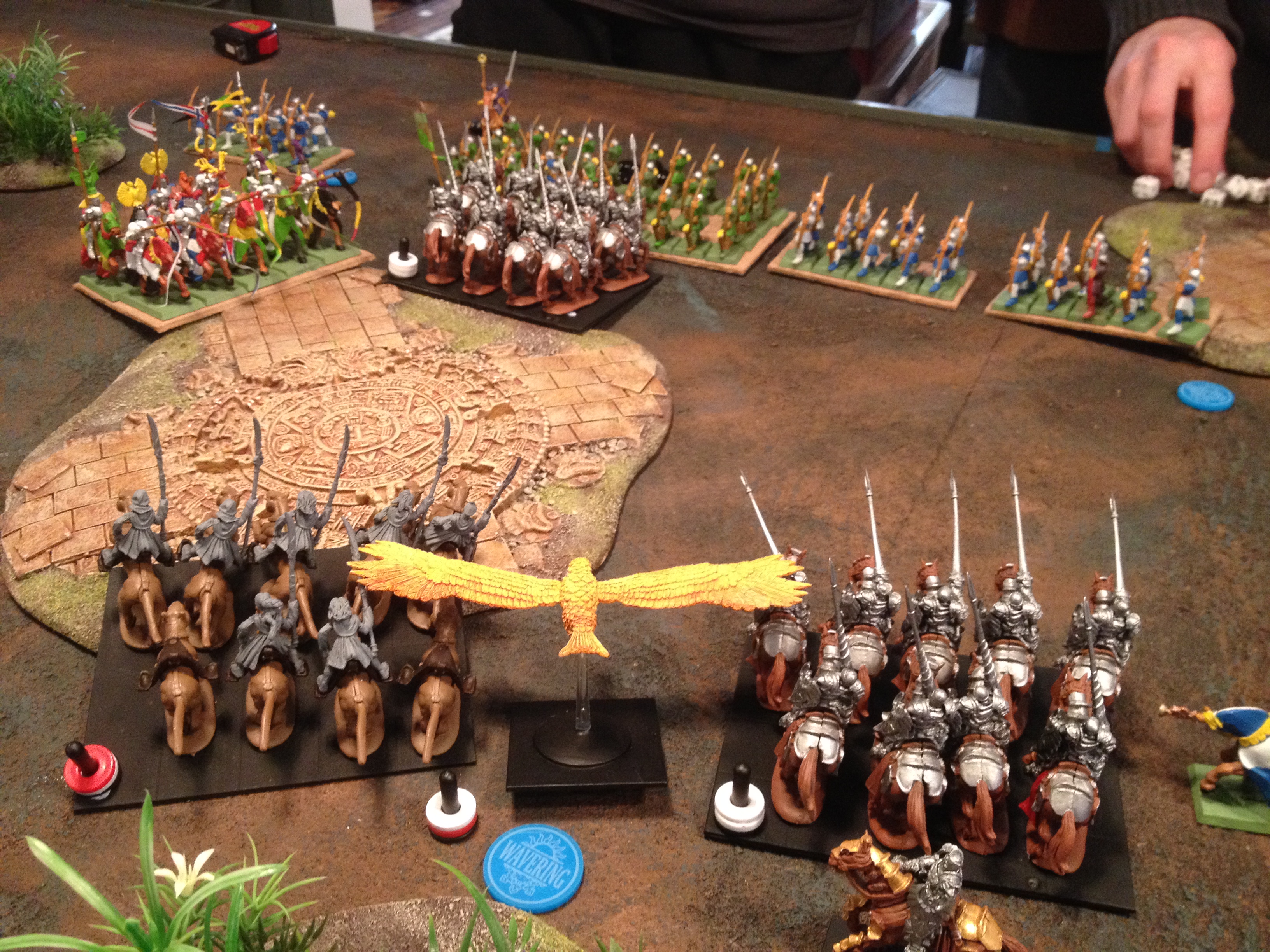 In David’s second turn he continued to advance the Knights on his right flank around the wood. The Knights with the Brew of Haste charged and killed the other unit of Panther Troop and the Crossbow Horde charged the Knights. They couldn’t shoot as they were disrupted so David’s best option. He peppered away with his Crossbow Troops forcing me to Heal and Bless in my turn.

My right flank turned in and started to mop up the crossbow troops. The damage was mounting on his horde but I think I took 3 rounds of combat to pop it. I tried to use a Panther Lancer Regiment to tie-up his Knights in the centre until my Knights had finished dealing with his infantry. 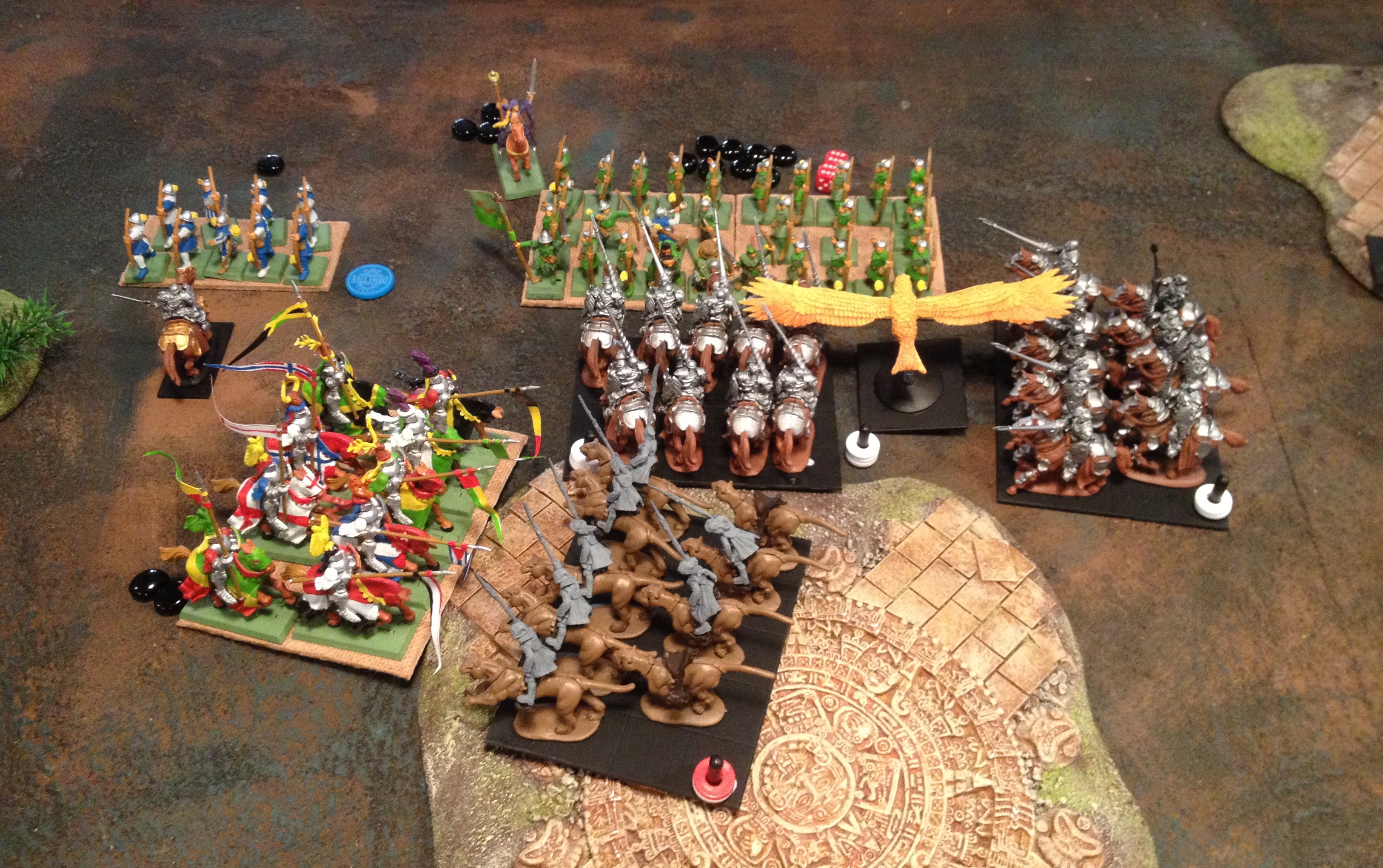 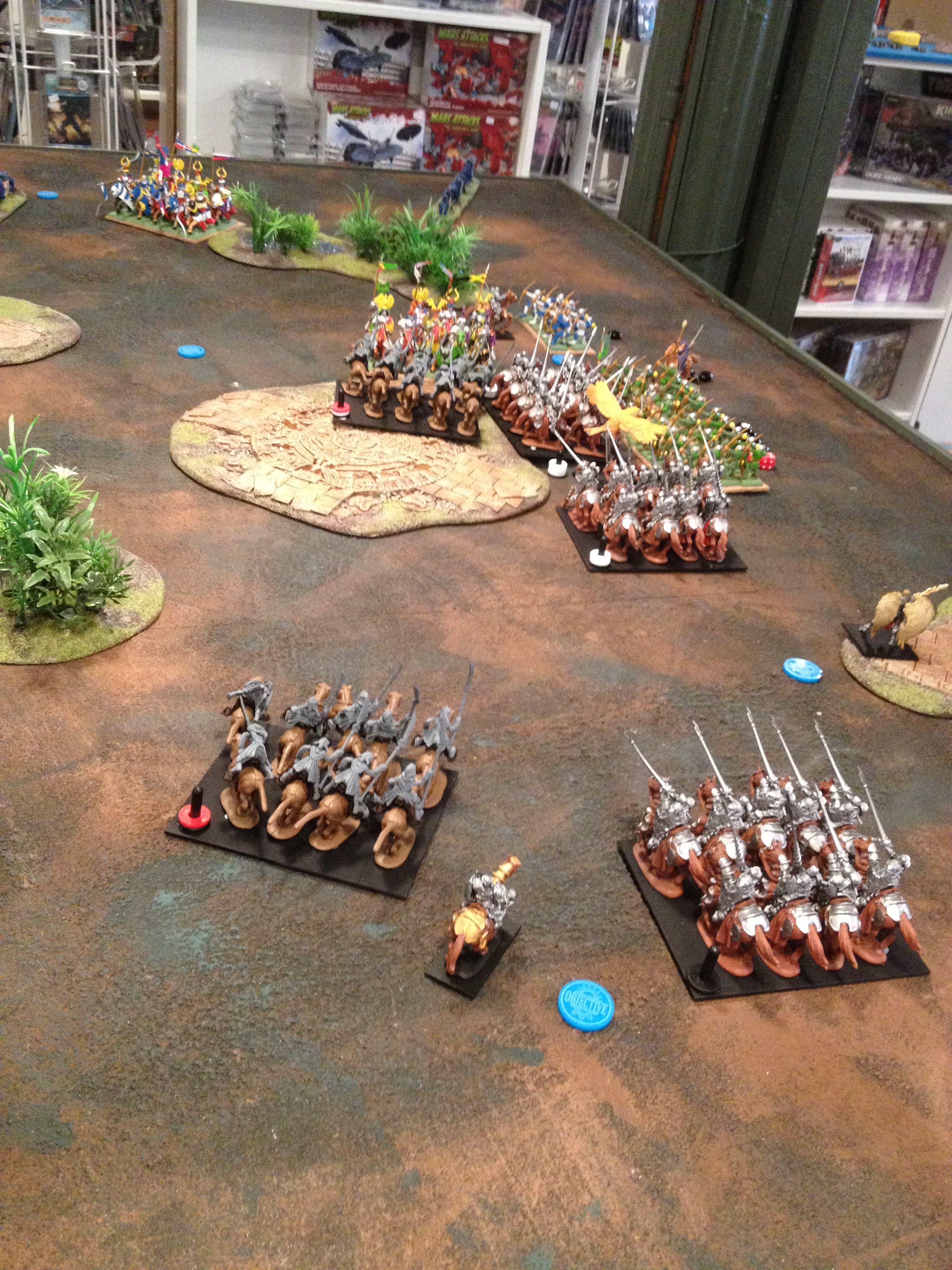 In David’s fouth turn the third unit of Knights had made it round the woods and into the middle but I now out numbered him in unit’s and characters.

In my fifth turn I sent a unit of Knights into those that had been running around the flank supported by the High Paladin and got very lucky with my rolls doing enough damage to rout them. 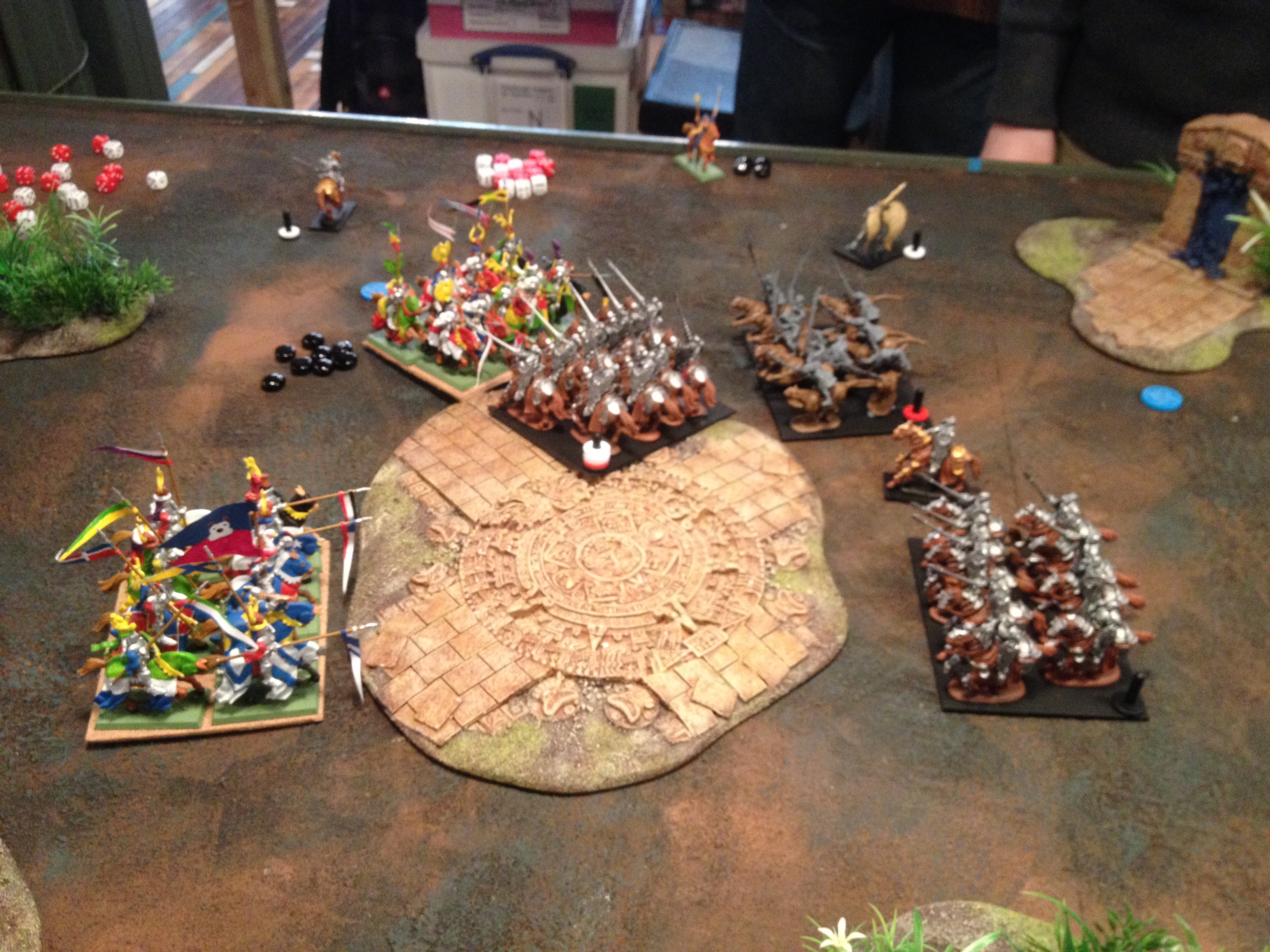 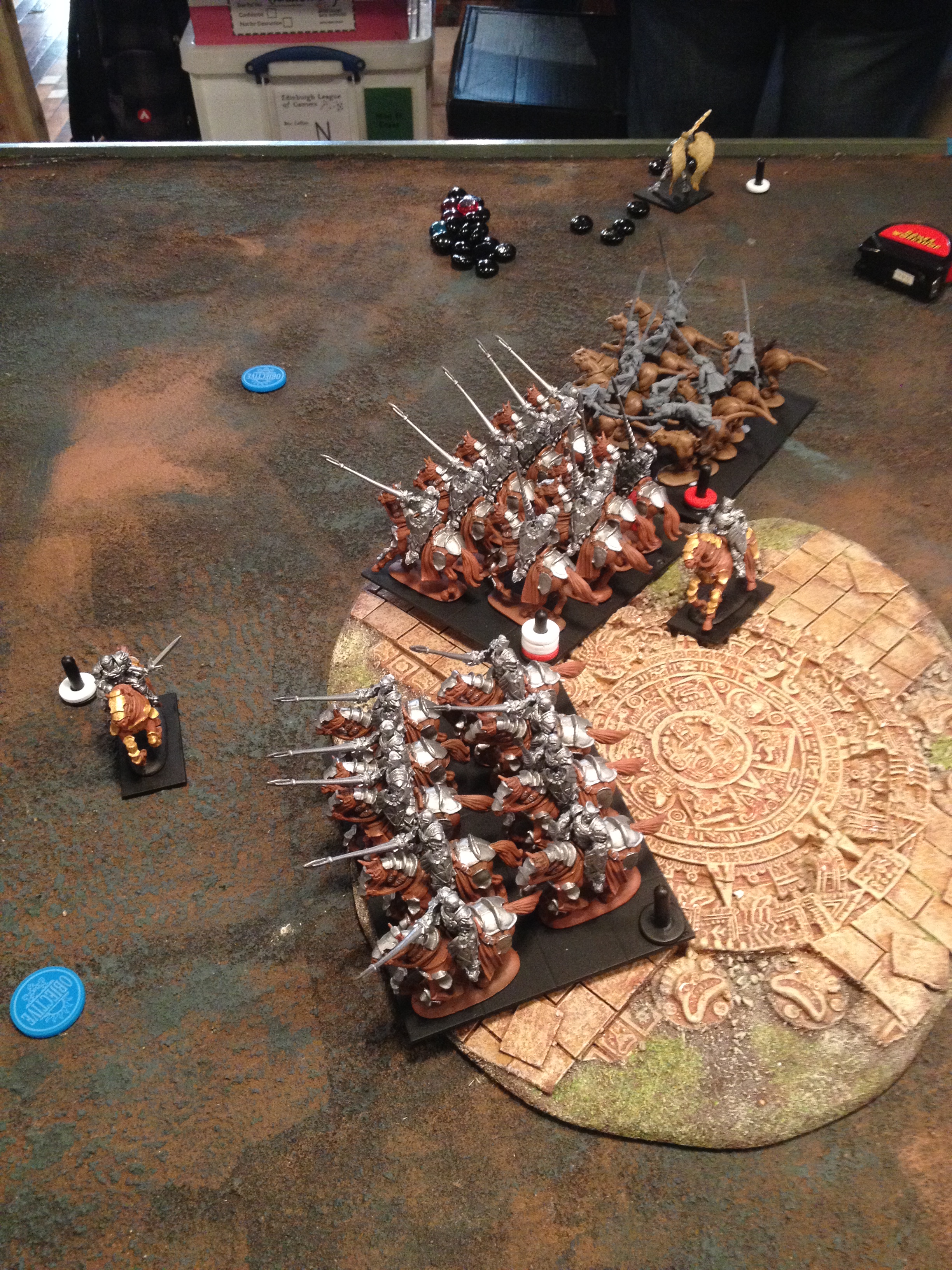 And that was game with David’s last model being removed. A great game that although I was on the front foot from winning the roll for first turn was helped a lot by good dice for me and below average for David. If David had gone first he might have put more pressure on me with his knights not allowing me to come forward as quickly as getting into his missile troops. Panther Lancers don’t like crossbows!!

So a good win in the end. I won 18-2 and David killed 660pts of my army. Due to the aggressive and quick nature of my army we had finished a little early so got to see the other gamers play. 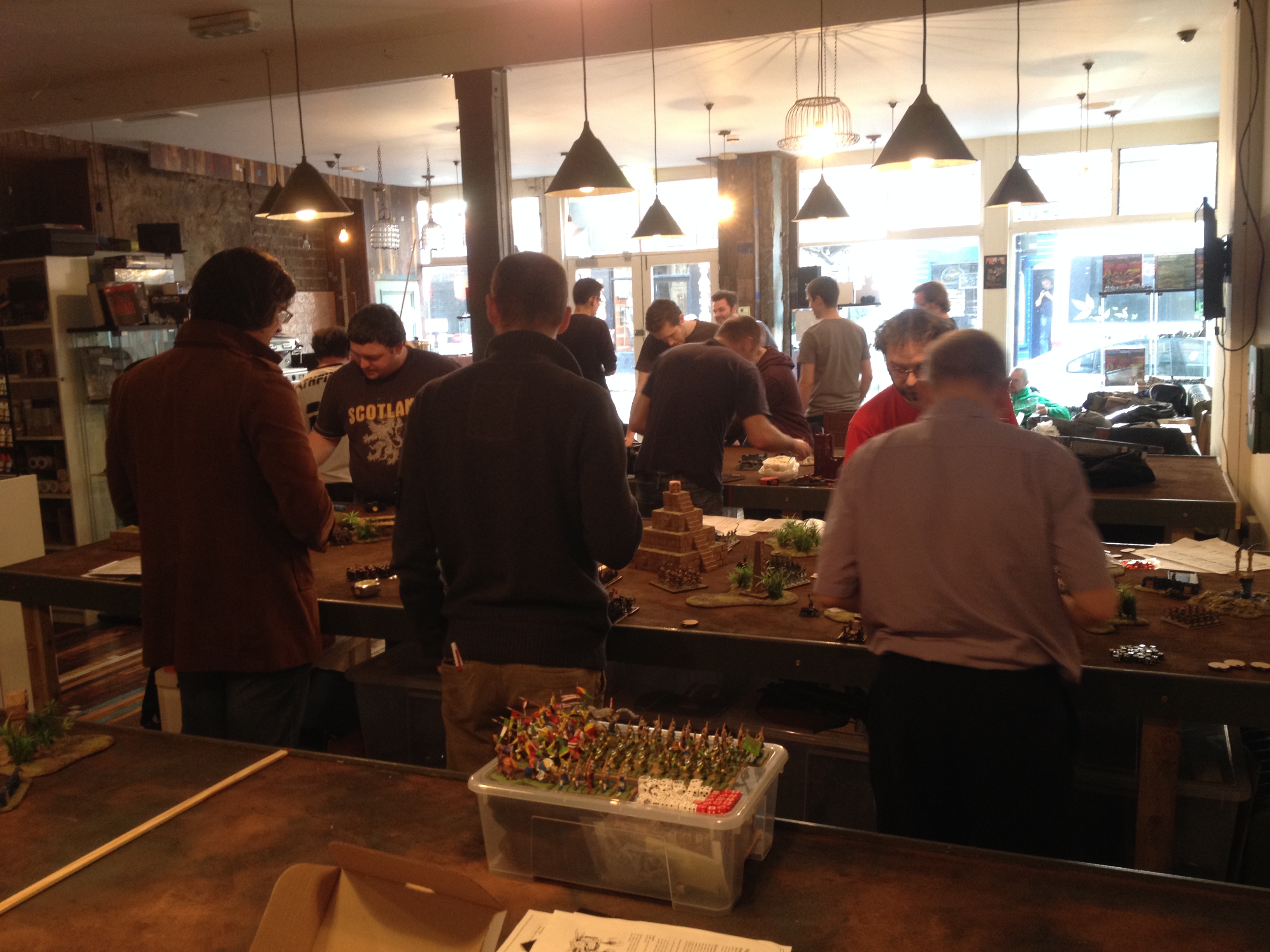 Other games in Round 2 – Steven Bonnar played Richard Rimington in a ‘stunty-off’! And Andy Meechan’s Undead played David Young’s Green horde of Goblins! 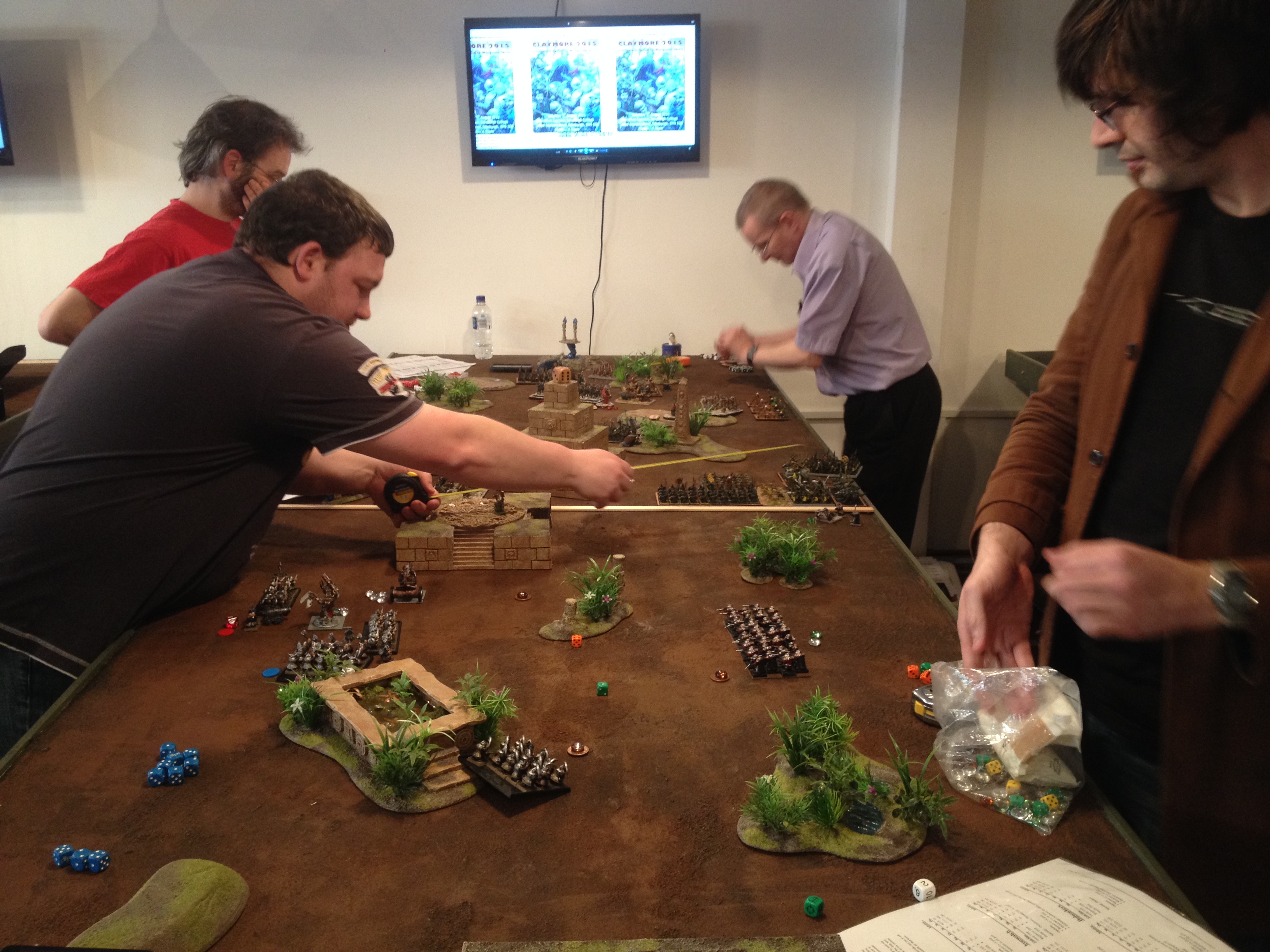 Tomorrow I’ll rap up Round 3 and the awards.