Clash of Kings Road Trip: Part 7c – Dave’s Dice are not his friend!

Going into Game 3 and because Dave had been busy demoing Xtreme I decided to have a bit of fun for the last game in Edinburgh. 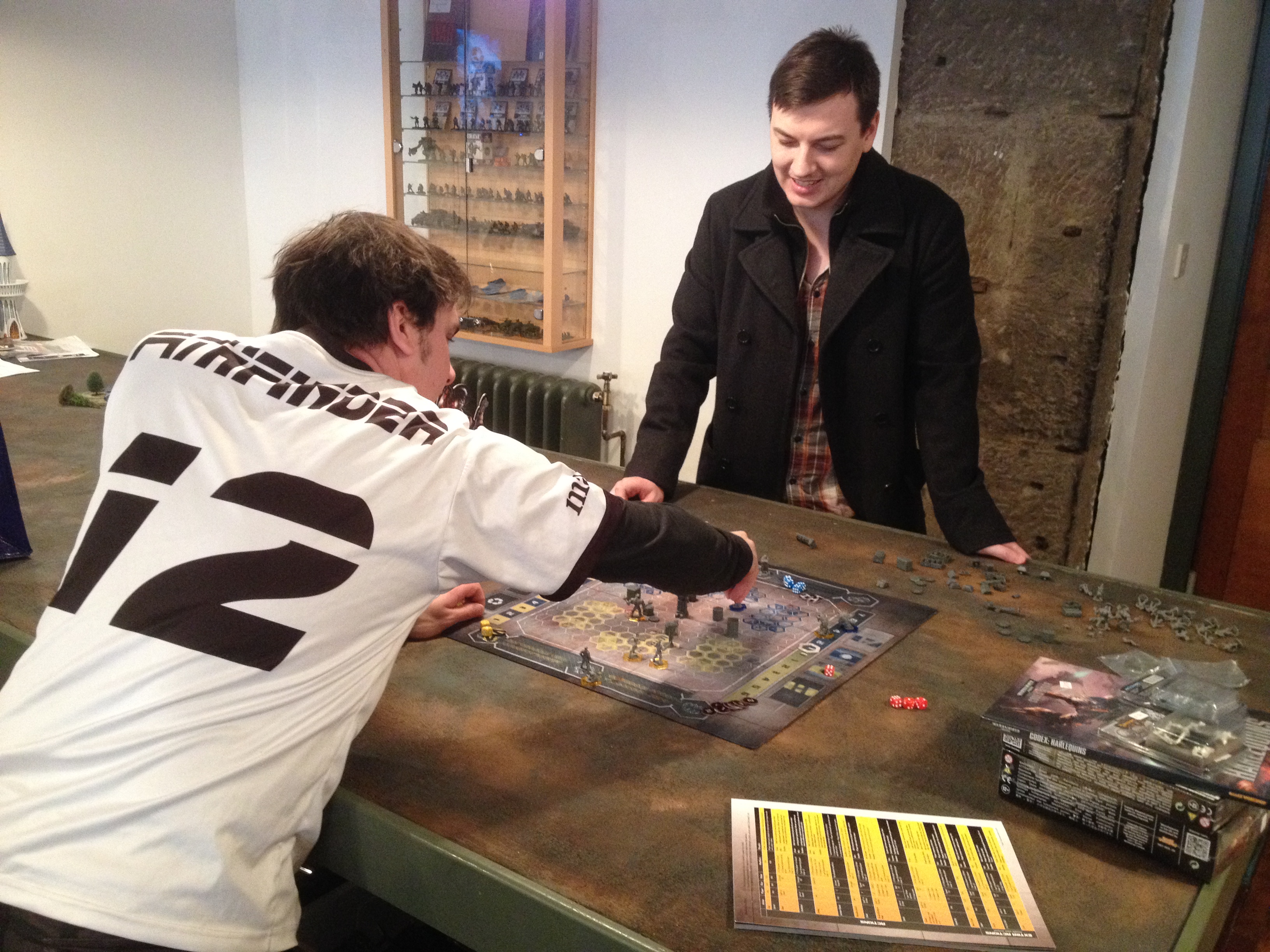 As I announced the pairings for the final game I explained this to the gathered gamers and Dave rolled his dice… 4! So me and my army versus Richard Rimington’s Dwarfs.

We were playing Kill and Pillage with 5 objectives.

Cannons with Elite re-rolls and being counter-charged by the Steel Bahemoths were my biggest concern. I felt fairly happy I could avoid the Behemoth’s with their low movement but was still wary as they chuck out 20 attacks with Crushing 3. Sure they need 6’s to hit but could quite happily cut through my Knights armour. As for the cannons, charge of the Light Brigade seems like a valid tactic! 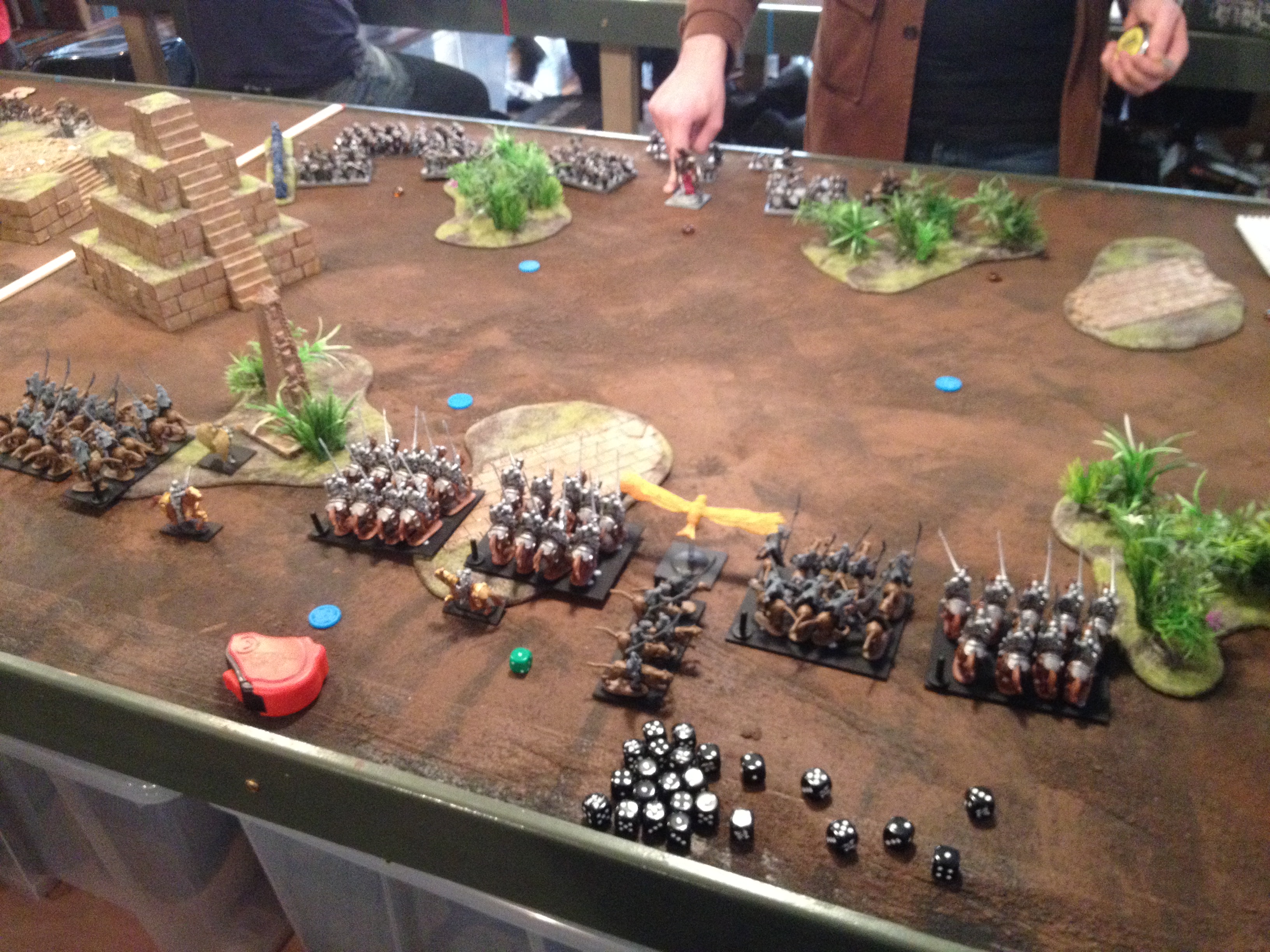 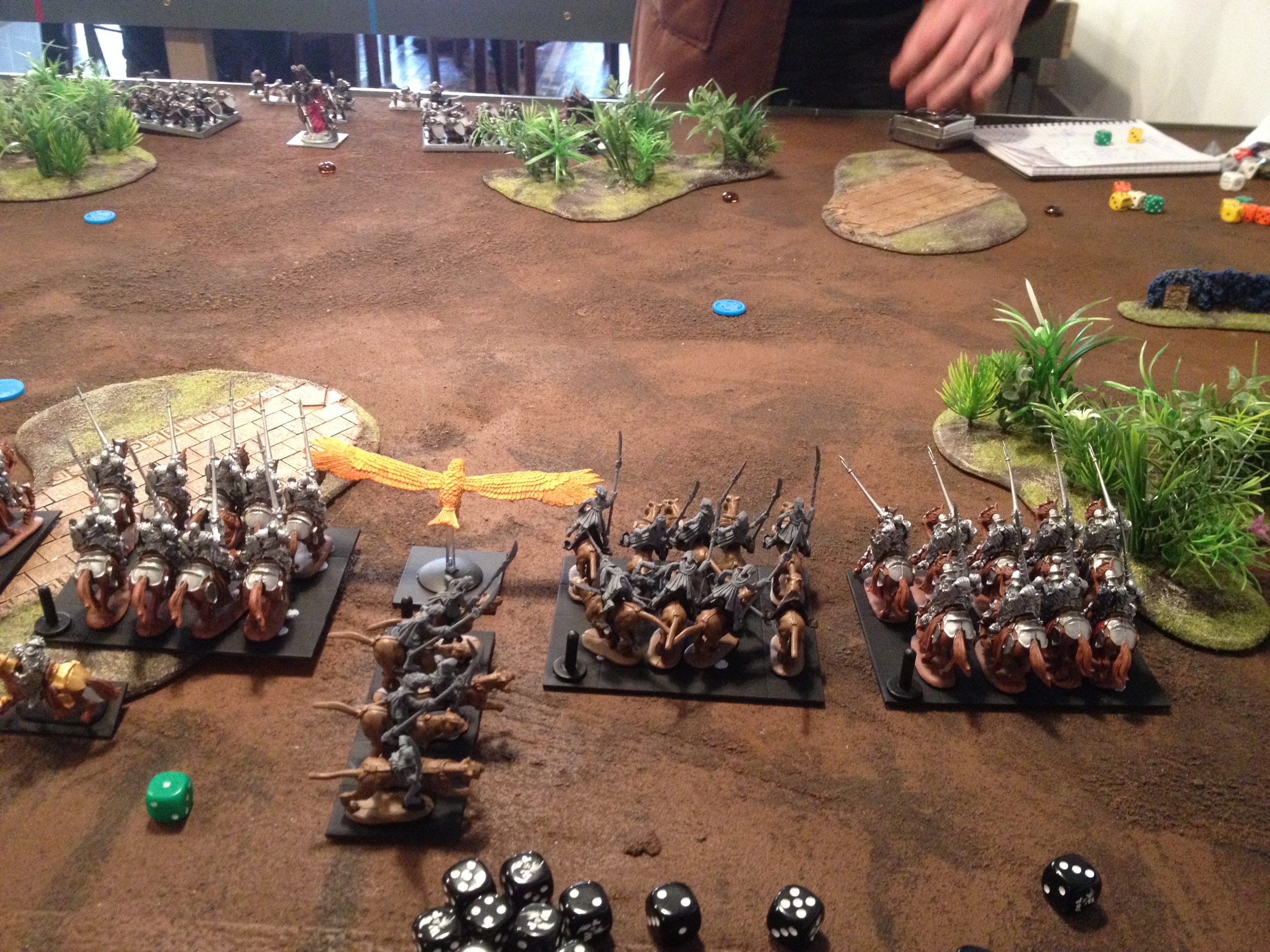 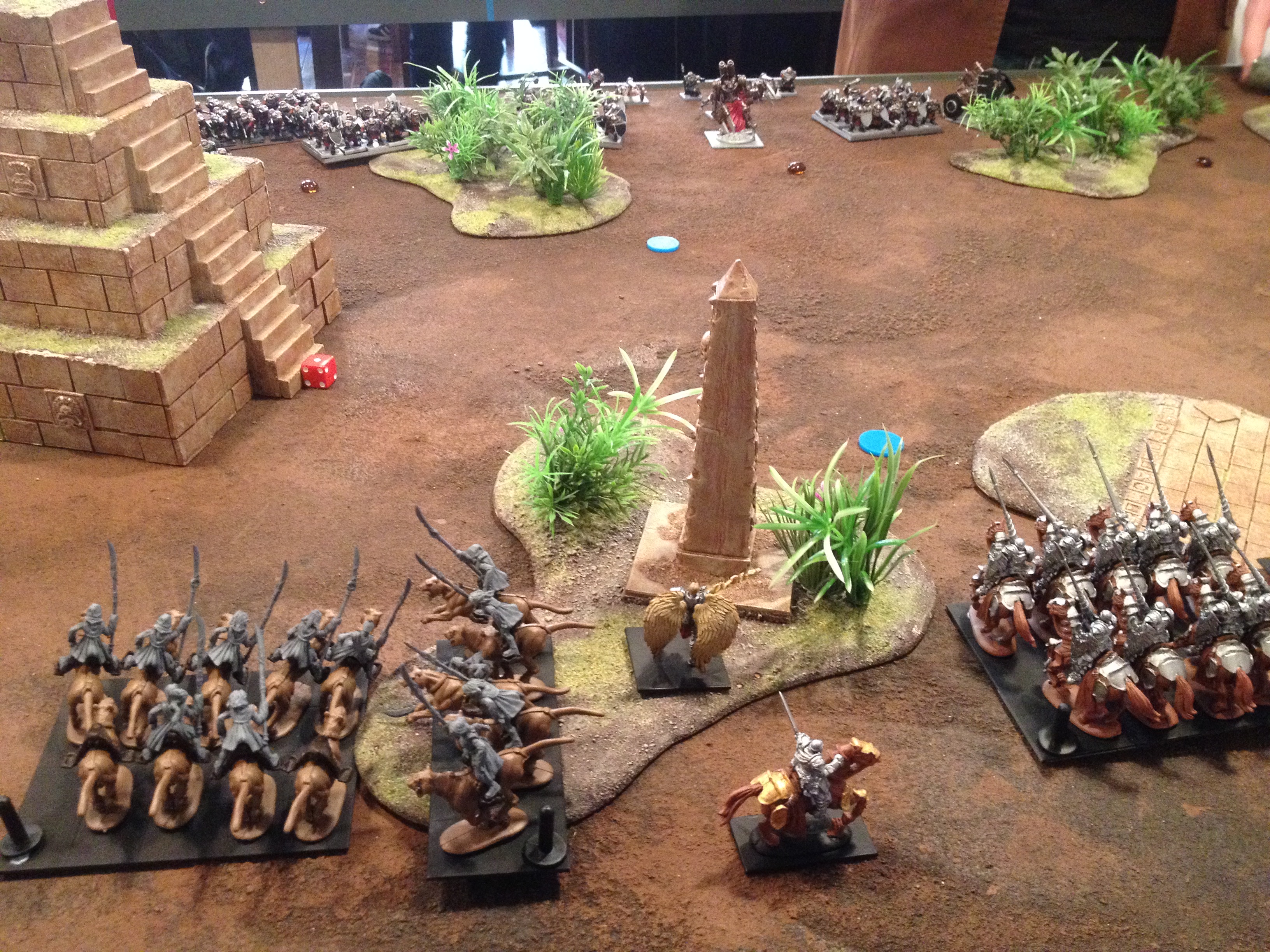 With that my faithful dice rolling assistance pulled up a chair and he rolled off for first turn, which Richard won, we shook hands and kicked off! 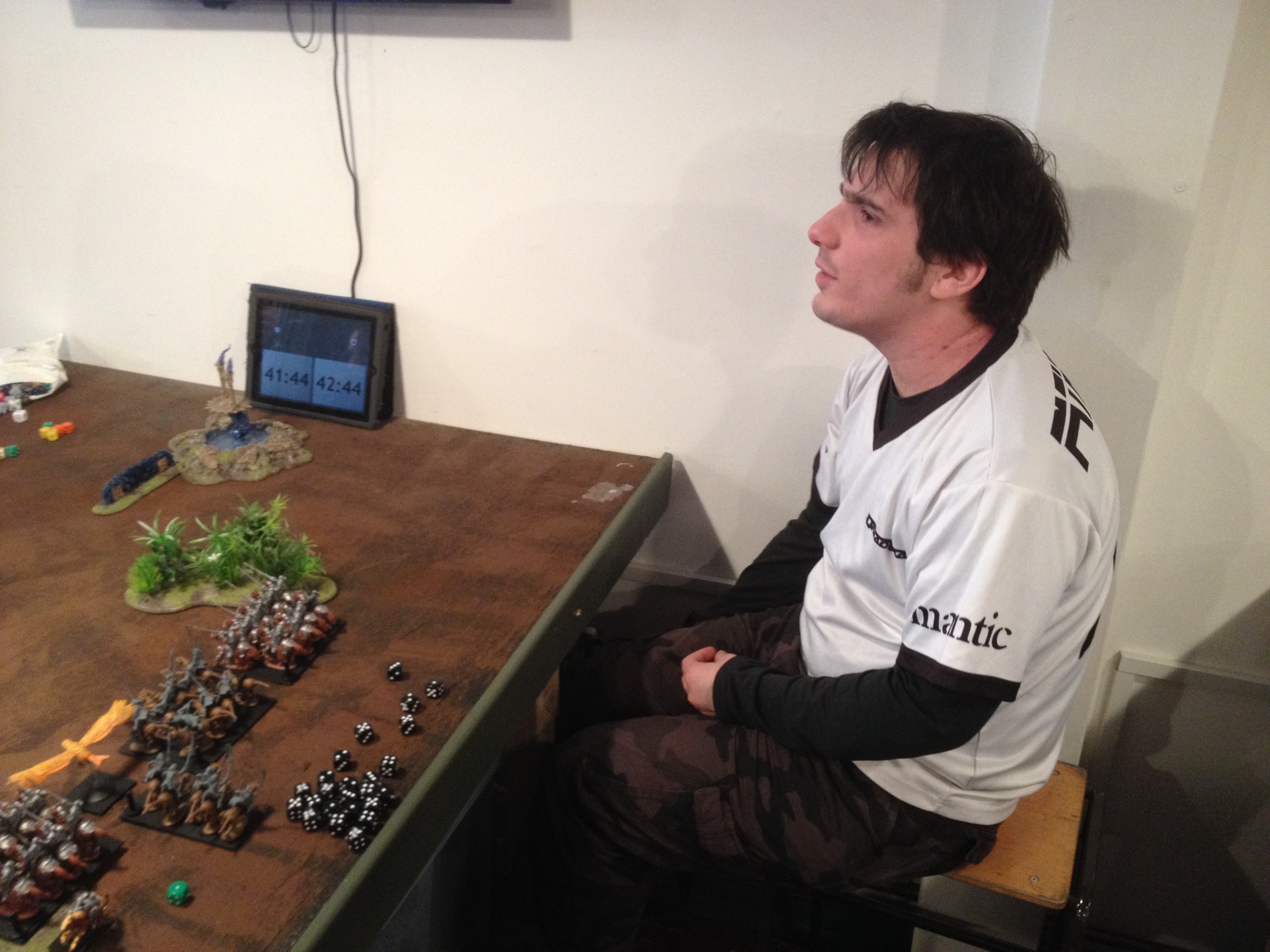 Not a lot happened in Richard’s first turn, a little movement and both cannons missed even with their re-rolls! I advanced my army up as quickly as possible and lined up the flyers for turn 2 charges.

In turn 2 Richard hit with one cannon (needing the re-roll) causing a small amount of damage to a unit of Paladin Knights but not enough to Rout them. The Rangers and Ironwatch Horde shot at the Panther Lancer Regiment on my left causing a bit of damage. In my turn 2 I charged the Phoenic and Angel into a cannon each. The Angel killed his target whilst the Phoenix didn’t. I changed facing with the Angel to line up a flank of rear charge on a unit or Behemoth in turn 3. I also charged a Panther Troop into a Behemoth mainly just to disrupt it and force it to charge me next turn. With the rest of my army I side-stepped to the right to keep my army at range (moving away from the Rangers and Horde) but also staying in charge range. Richard knew what he was doing with setting up for counter charges so the time wasn’t right for me to mass charge. I would bide my time. Instead I did a little healing to recover wounds from Richard’s shooting. 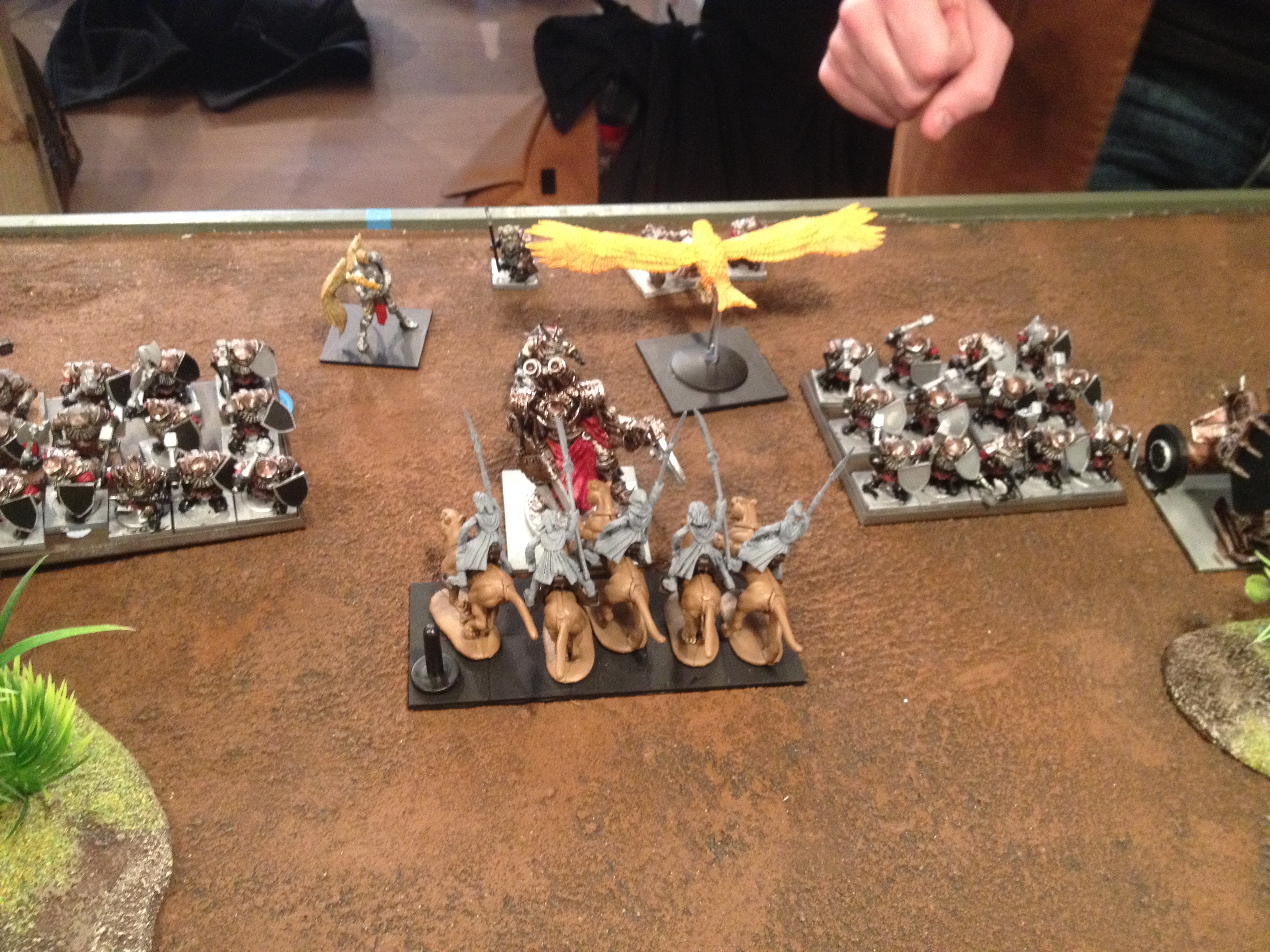 Richard’s turn 3 saw the Behemoth in the centre charge into a wipe out the Panther troop whilst the Behemoth on the left used it’s breath attack on a Panther Regiment. Now however the cannons were out of action and the Rangers and Ironwatch were at long range meaning my units were a lot safer than they would have been. 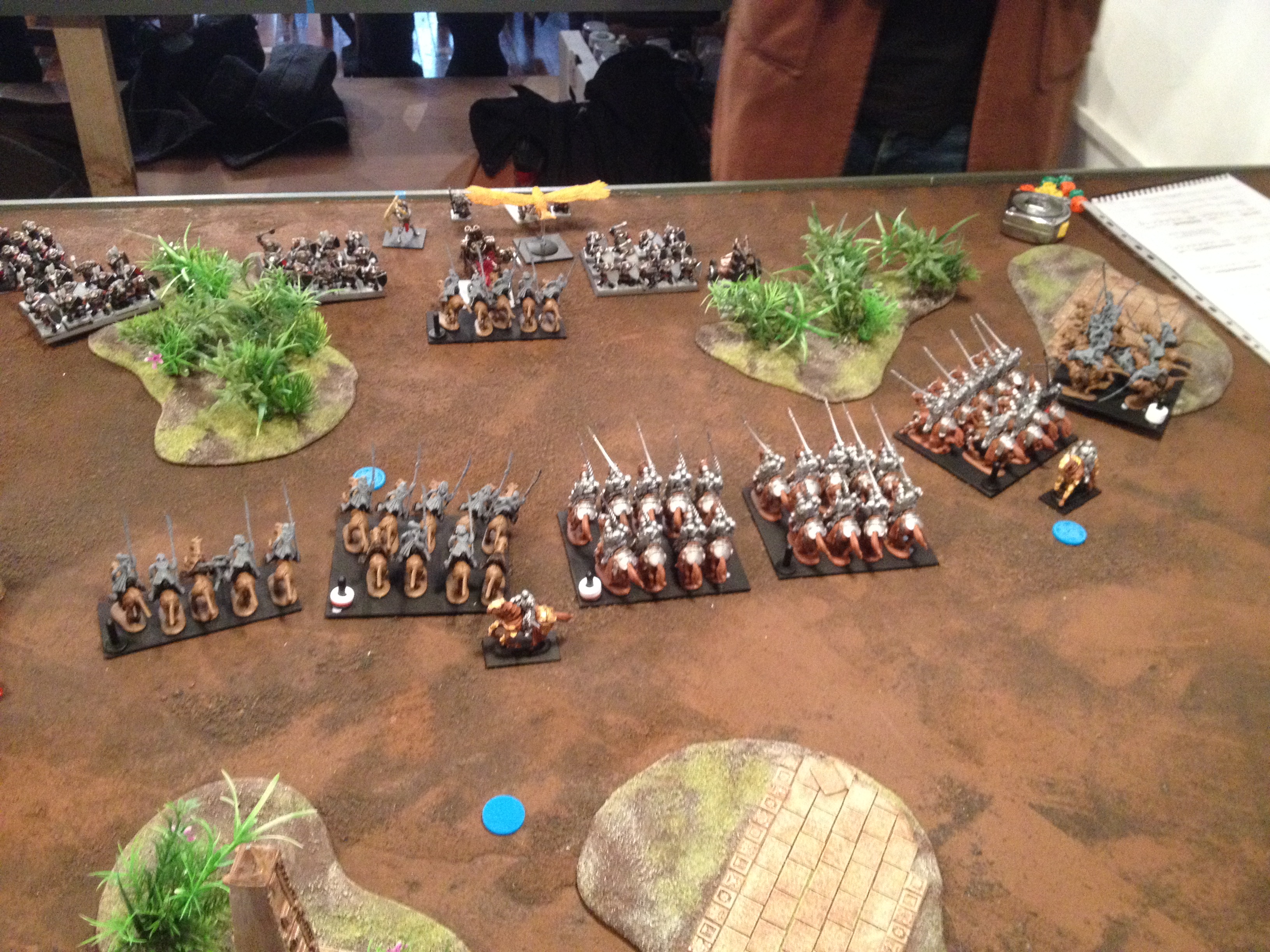 My turn 3 saw me get a rear charge off against the Behemoth in the centre getting triple attacks and smashing the mighty machine to pieces. The Phoenix charged back into and popped the remaining cannon with the rest of the army re-positioning.

Richard’s turn 4 was much the same with the remaining Behemoth breathing on the panthers again. The Dwarf King and Warmsith charged into the Angel without much success. I think I had miss calculated one distance and Richard got a charge off against a Panther Troop but as this was disrupted they failed to kill the unit.

Turn 4 was my turn to charge! 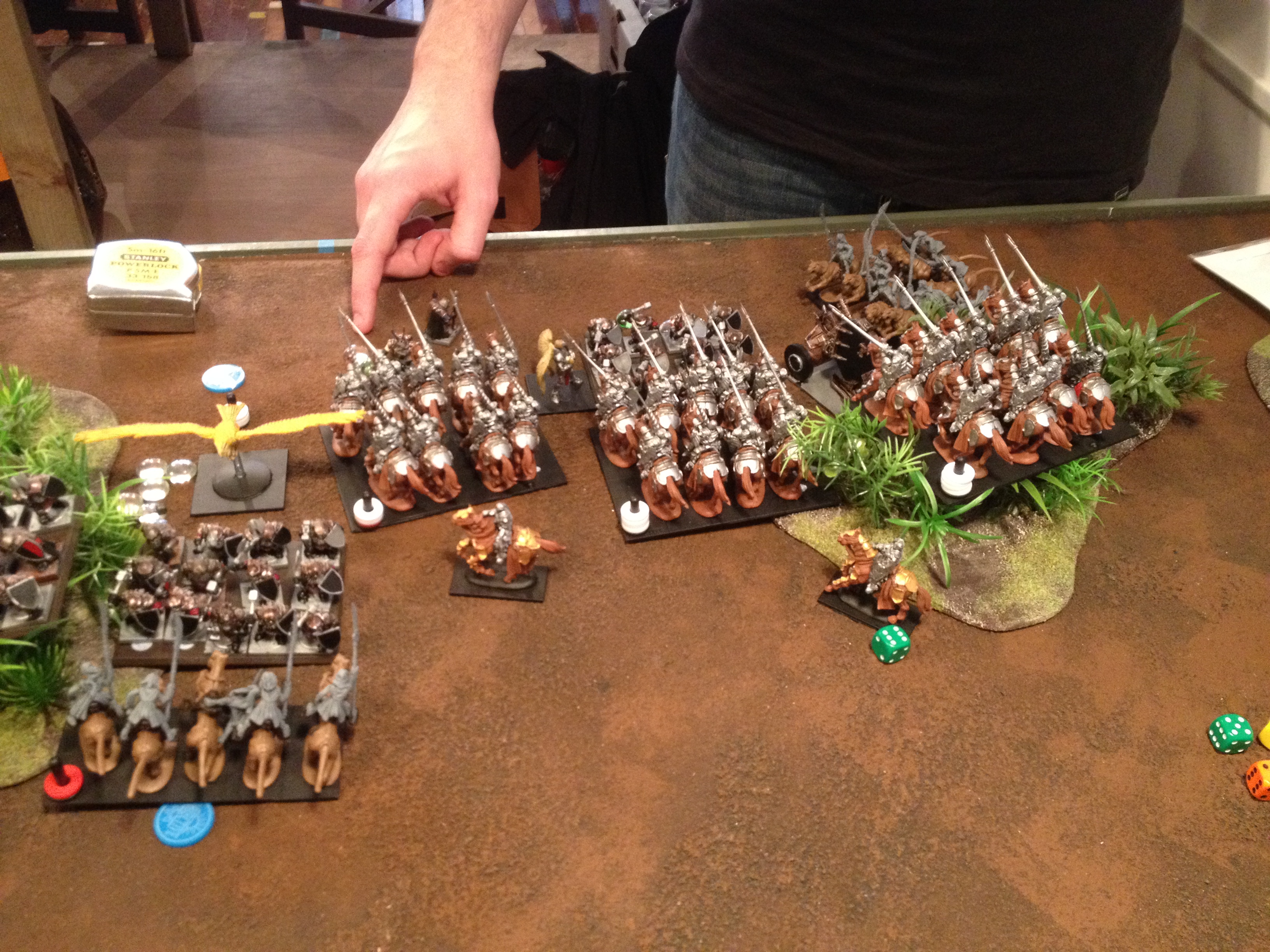 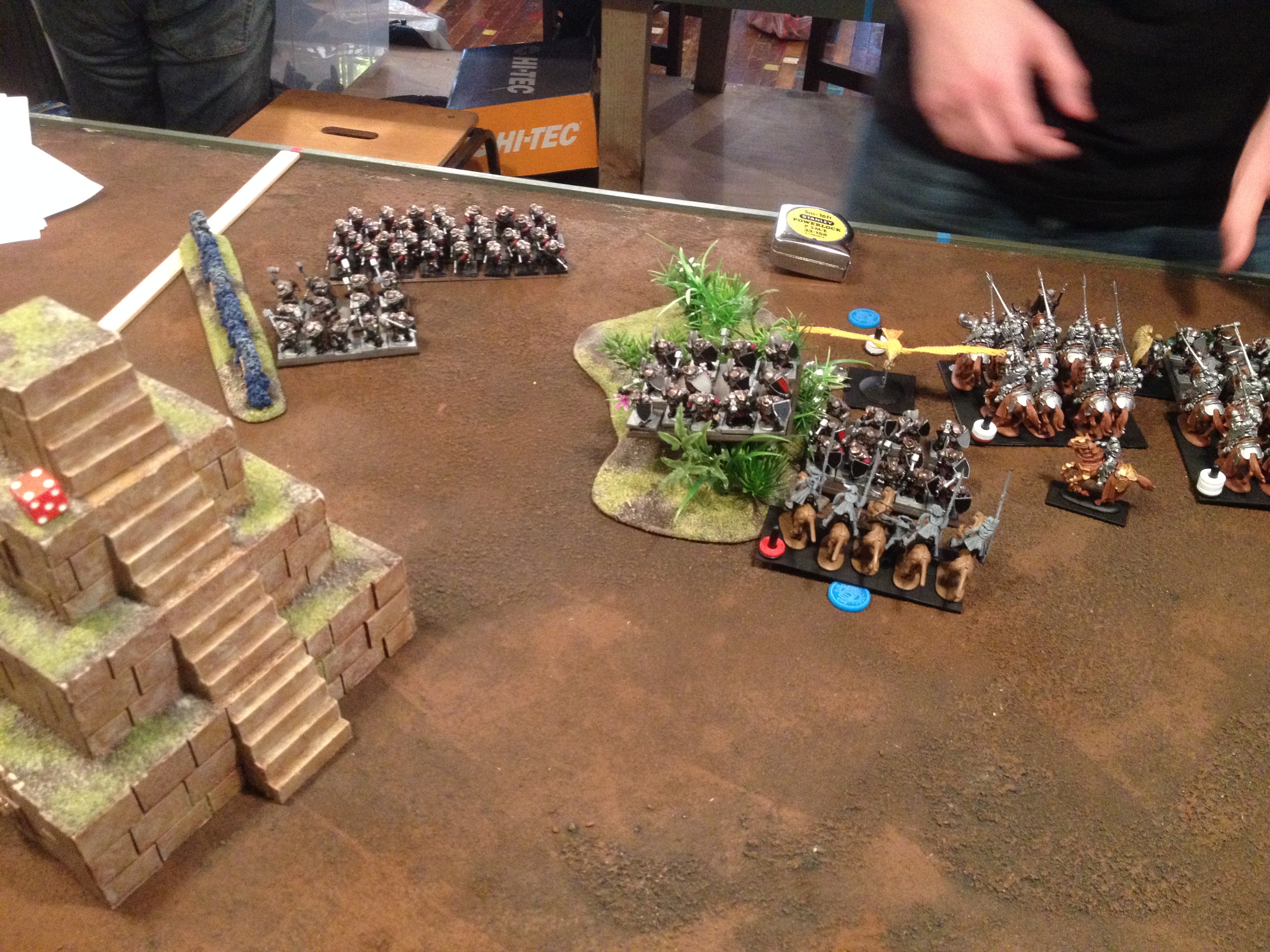 One unit of knights with flanking Panther Regiment took on the remaining Behemoth. Another unit of Knights and Angel took on the Ironguard beside them and routed them. The Phoenix rear charged the Ironguard in front of the Panther troop (who also went in the front) but we (Dave) double 1’d the Nerve test so it didn’t matter how much damage we did! 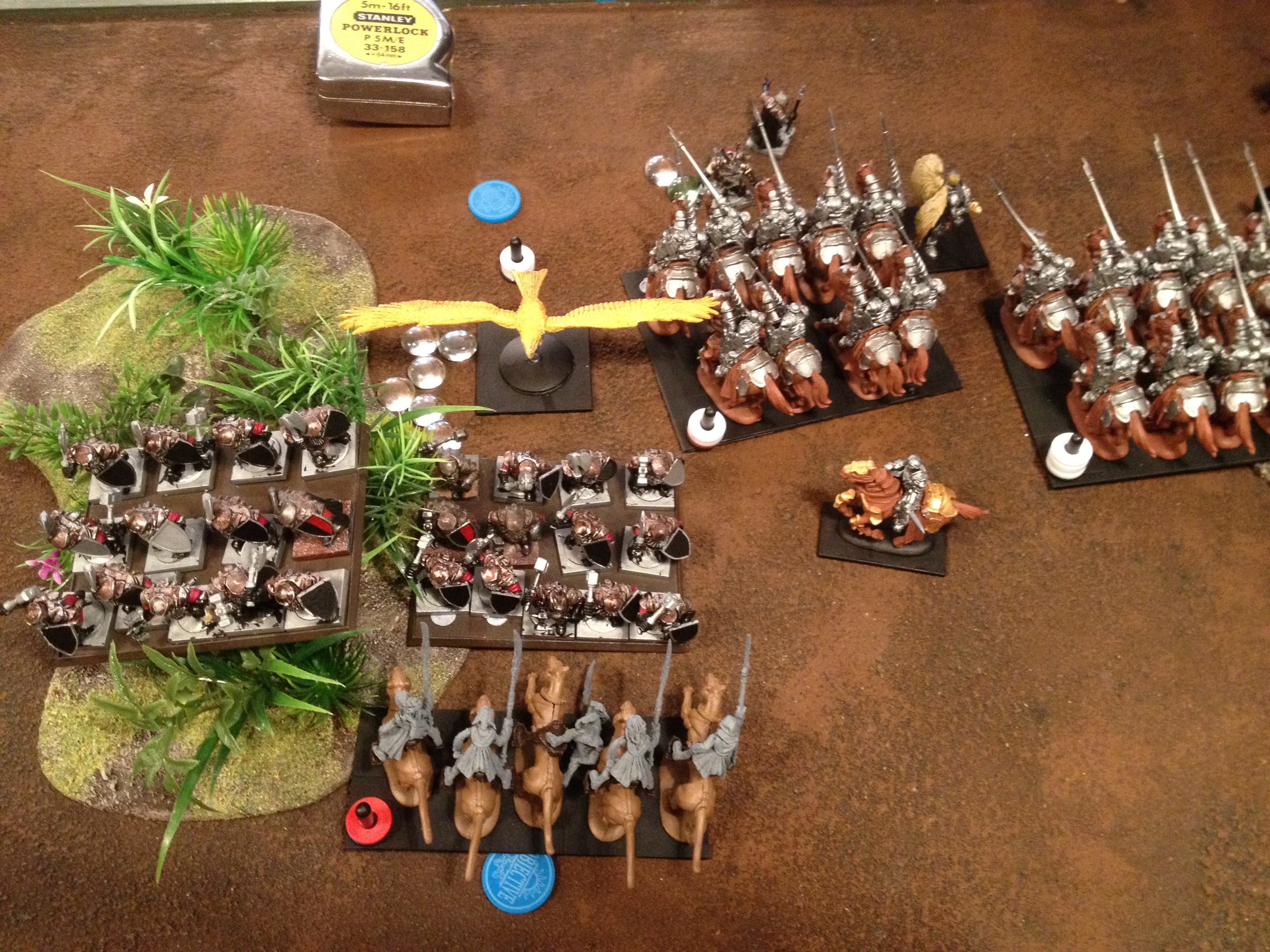 Turn 4 and 5 was spent bouncing into and out of combat. A second Ironguard unit joined the fight against the Panther Troop which wiped them out but because I had picked the right time and my unit’s were fairly healthy I won the contest and broke his centre! In turn 5 I sent the Angel into the Horde of Ironwatch, I didn’t expect him to win but he could stop them shooting as some of my scoring solid unit’s were starting to carry a worrying amount of damage and he was safe from a flank charge.

I finished off the characters and heavily damaged Ironguard leaving Richard with one unit of Ironguard, the Ranger regiment and Ironwatch Horde going into turn 6. 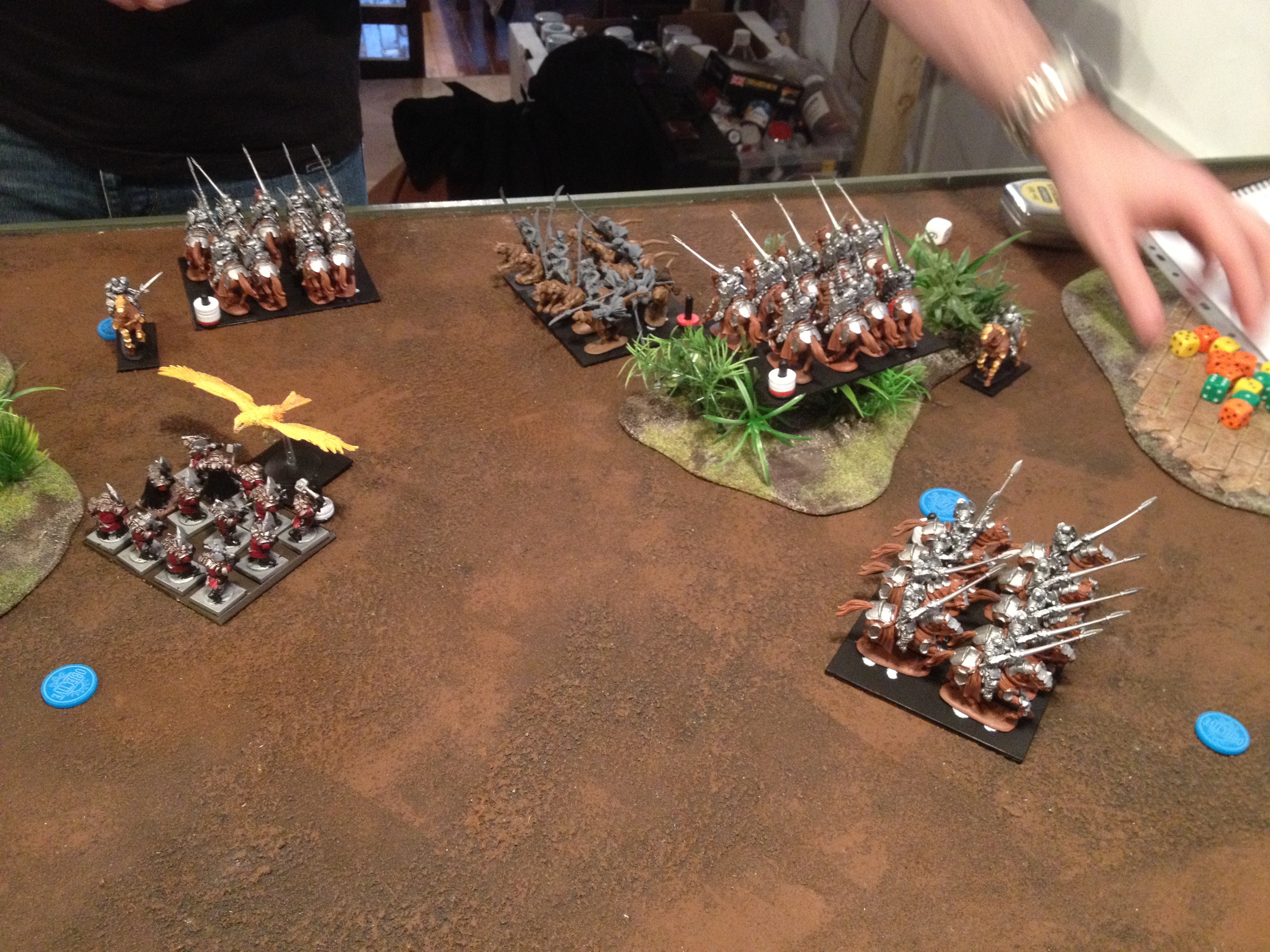 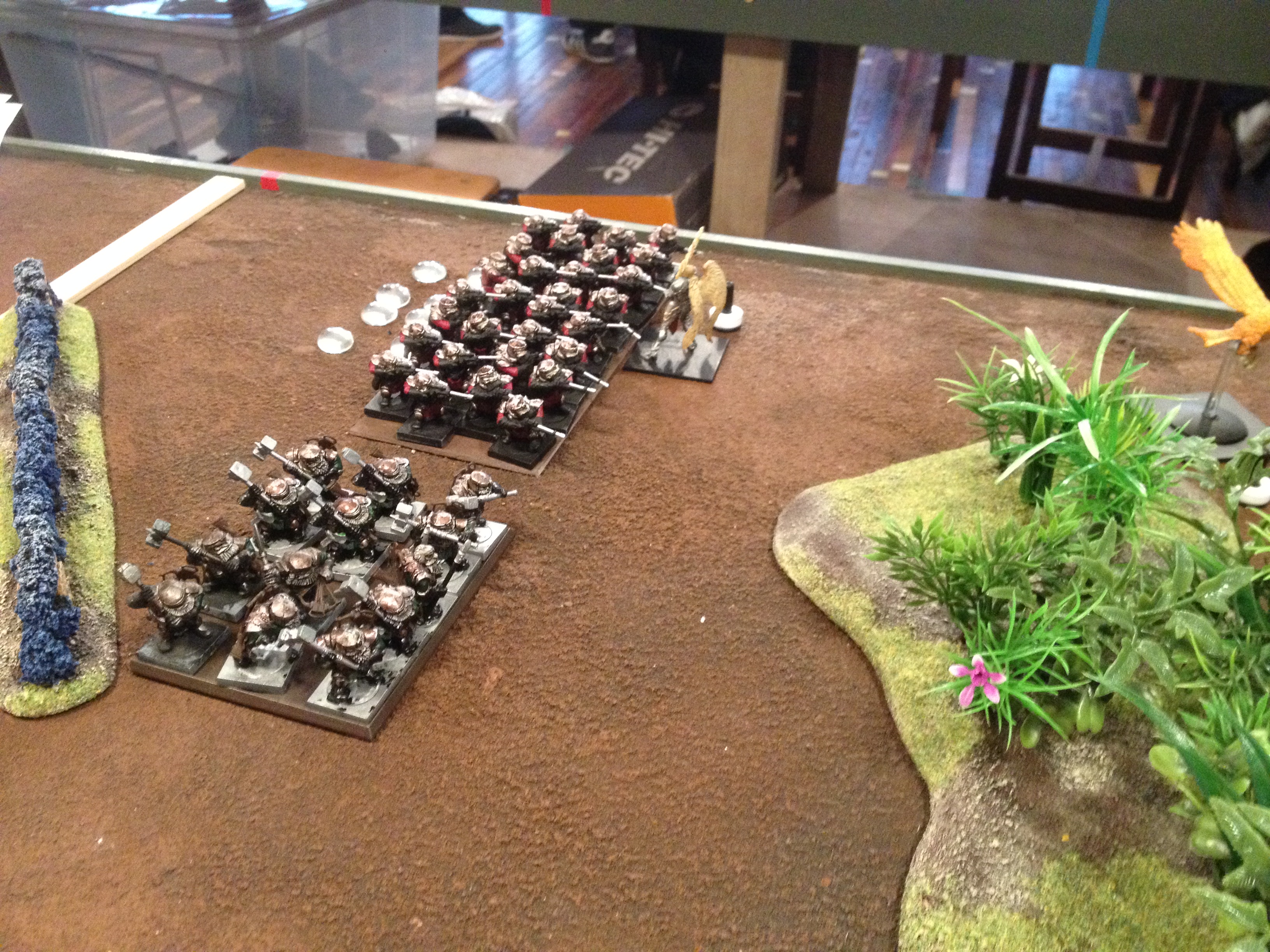 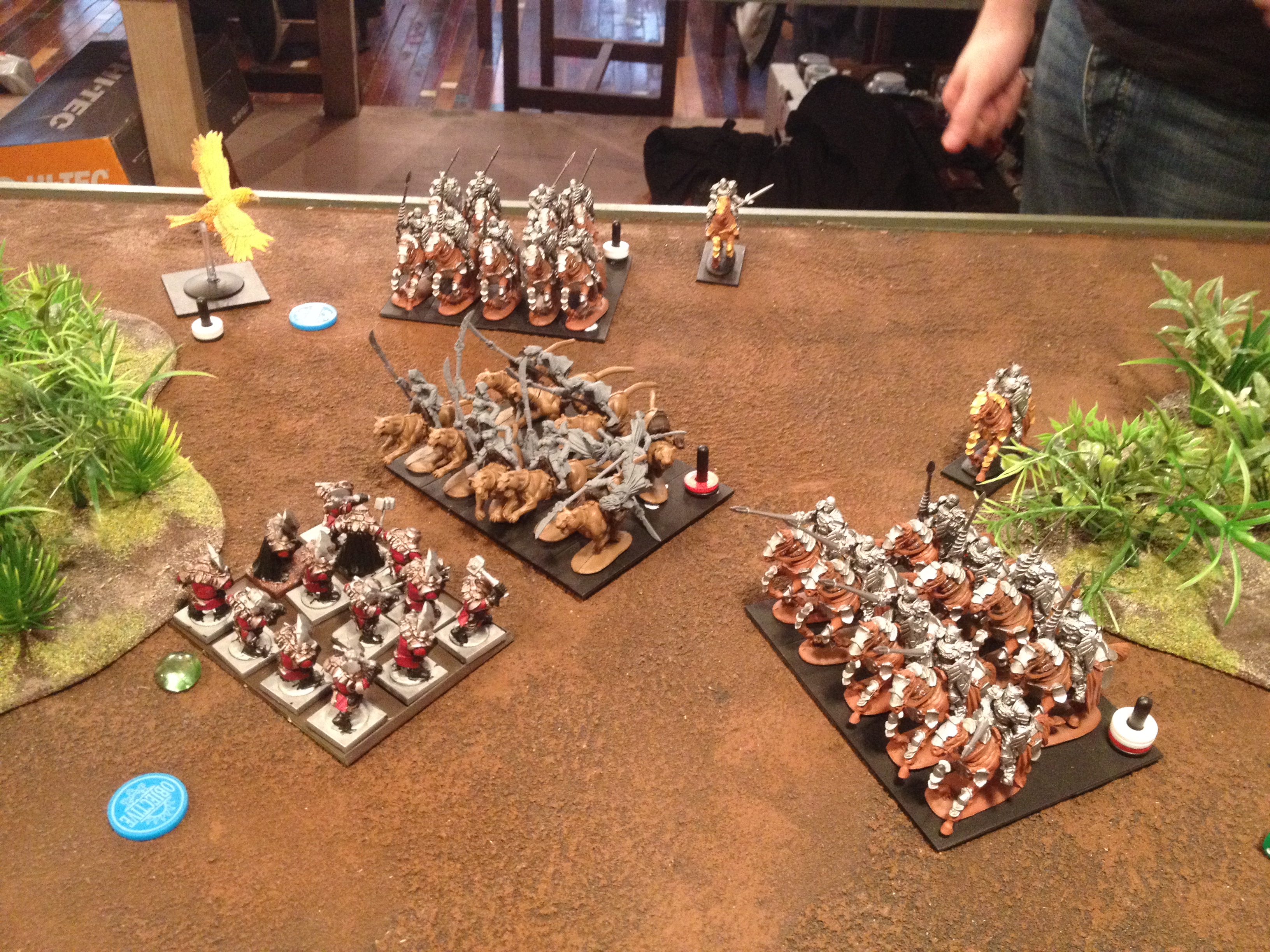 At the end of Turn 6 Dave rolled the dice and the game ended. 17-3 win to the Fighting Mongooses – 1040pts to 310pts. I had actually only lost one Panther Regiment and both Panther Troops by the end of the game although the rest of the army was looking a little mauled!

Great game to required a level head to choose when to charge. If I had gone early Richard could have done real damage with the counter charge.

I will cover the final standings and army pics in another Blog post as I’m aware this has already gone on quite a bit! Should be up on Monday.

Hope you have a good weekend – I’ll be doing something with my Martians! And maybe painting some Basileans…!