Just before we start, just wanted to let you know that Deadzone Week kicks off tomorrow on the blog!

We are now well past the half way point for the kickstarter, and while we a not yet heading into the final stretch  –  what a journey it has already been – with lots of Martians, flying saucers, trucks and giant stompy robots! 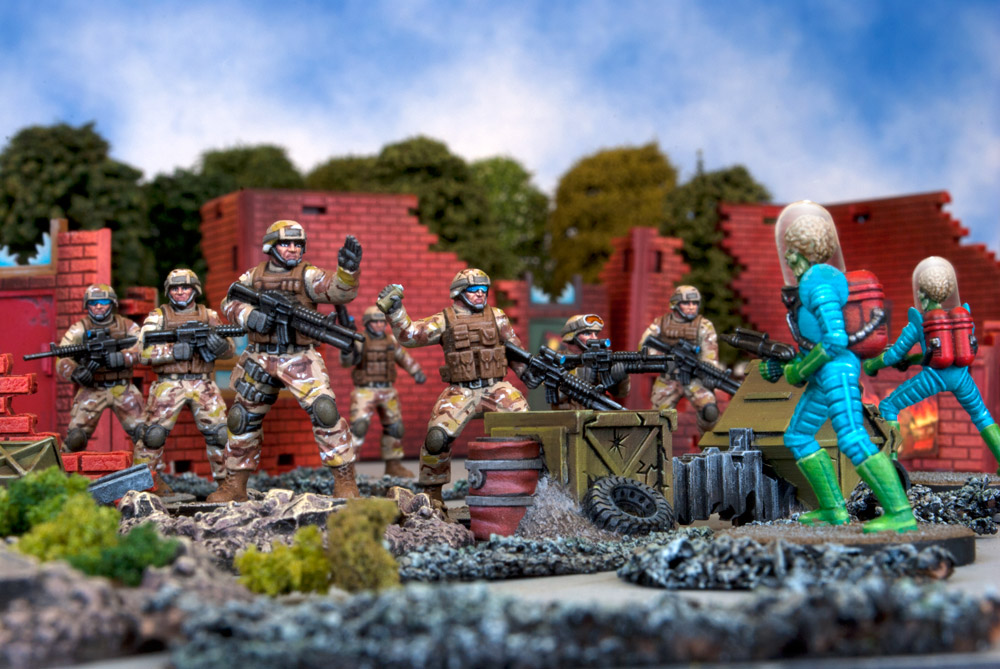 In every Kickstarter there comes a point where the core product is drowned by all the updates. It becomes hard to see the wood for the trees, and as always the updates and the online chat we receive influences the product too. In this case we have tried something new — which is a credit system – and I think this has offered a level of choice not seen on other miniature kickstarters. However, I know I am hopeless with too much choice! I get confused and sometimes give up entirely.

It also does not allow us to give everyone out there a really clear picture of what you need to buy. With a new game you want to spend you money to give you the full game experience – and something you will really enjoy.

So what are we funding with Mars Attacks? Essentially it is a strongly narrative miniatures game played on a tabletop, with fantastic scenery!

This means there is a strong story running through all the scenarios linking the missions – from rescuing the captive, stealing intelligence, or capturing resources – and occasionally just plain kill the enemy big time!

As the Kickstarter has developed we have been able to add lots of fantastic new kits and heroes to this narrative – now there are missions that revolve around the flying saucers, and the giant robots. All of that is possible because of your support and faith. Thank you.

So, we have looked again at the $150 core pledge- and put a package together to make it as simple and great value as possible. It gives you all you need to get into the game and play it as it is designed. Obviously this wasn’t possible at the beginning, because we had no idea what we would get funded! However we have now built a ‘Recommended Pledge’ which offers all the models, rules and deluxe mat – everything you will need to play all the way through the scenarios and missions. I am sure that this will still get more add-ons too as we run to the finish line (hint hint!)

Of course if you want to keep the credit option it is still there, so if you want to build a Martian army with your credit this is still a valid choice – the credit system remains yours to use as you see fit. But for those that want a ‘1-click’ solution to lots of Mars Attacks gaming, this is the pick.

There is also a $300 pledge level, and we will offer a similar ‘Recommended Pledge’ for that level too which will give you all you need to play through the scenarios making for a great narrative game – but building up to also give you two armies to use in points-based games. This will allow you to play massive 4×4 battles with lots of great and interesting units on each side – and lots more scenery to customize your tabletop. And our Bloodshed on the Battlefield backers will still have $25 more credit to spend!

We are also evaluating if we can allow some of each pledge to be used against pledge boosters, to soak up some more of the credit. We will let you know soon.

We are hoping that between now and the end of the Kickstarter we can add a few more fantastic bits into the range. Next up is the last hero to the Starter Set – and we’ll follow that up with a co-op play and solo way of playing – both of which you’ll have all the models you need in the package above. We are then looking at adding some scenery choices – alongside the fantastic ‘battlefield extras’ from Antenociti’s Workshop – which will really make your gaming table come alive. We think a few people might come aboard for the scenery alone. We have posted the Deadzone video in this update because that tile system uses the same as the Mars Attacks one, and you can see how fantastic the scenery will be.

We also want to get the giant Bugs locked in, plus more for the Novas Vira and heroes for the Martian faction – so certainly lots still to play for!

Please support Mars Attacks on Kickstarter – if you pledge before Sunday, there’s 5 FREE Tiger Corps Miniatures being included in pledges of $100 and up!