Well, they may have gone insane in the process and are now sporting all manner of wild and wacky headgear but the guys from Golem have been splashing the paint around and, hands hurting (ever tried wielding a paintbrush covered in thorns? Darn that dark magic), have produced some fantastic paintjobs for our excellent Abyssal Dwarf miniatures! And what better way to start the show than with the staple unit in any Abyssal Dwarf Army; the Black Souls! 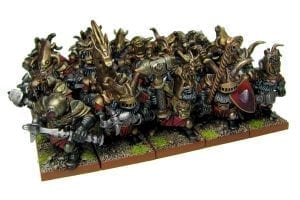 These guys are the mainstay of any Abyssal Dwarf army; more numerous that their Immortal Guard brethren, and better armoured that the Decimators, whose use of the lethal blunderbuss restrict the amount of armour they can carry. 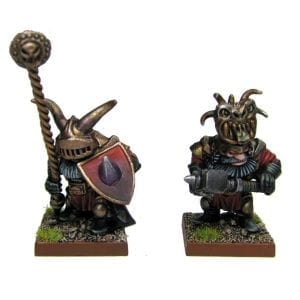 The Black Souls regiment are a hybrid of the Dwarf plastic ironclads and the Abyssal Dwarf conversion kit, with enough metal pieces to give each Abyssal Dwarf different headgear (for those of you who are a stickler for variety) as well as new weapons, shield and command parts. Bob has truly conveyed the mad, chaotic nature of the Abyss in this new kit, even down to the Dwarf Dog, which gets itself a brand new Abyssal head!

Now available to pre-order as a separate kit with a load more fancy pictures to look at here, the Black Souls will be released on the 25th February. We understand that you might not be able to wait that long however, and there are 40 Black Soul warriors (either 2 regiments or an entire Horde if you play Kings of War like a man!) to be had in Gorgoth’s Legion of Terror which will ship earlier!

Let us know what you think below!