Of the speaking races, the insane necromancer Mhorgoth hates the Elves above all others. They raised and taught him, comforted him when his curse struck down those he loved. And then they turned on him, condemning him to be burnt alive in the Eternal Flame. Scarred, in constant agony because of their actions, Mhorgoth would drag every Elf down and make them suffer so horribly they will beg to join his kingdom of the dead.

Mhorgoth’s mighty army of skeleton warriors marches from the south, out of the desert eating the lands of the Southern Kindreds, heading unerringly to the ruined city of Borath Lei.

Borath Lei is sacred to the Elves. In ages gone, the city was cast down. Its shattered walls stand in the wastes, faint traces of Elven magic holding the ever-hungry desert at bay, an oasis of sorts. Under the soft grasses before its ruined gates lie the bones of ten thousand Elven warriors, intermingled with those who slew them. Mhorgoth intends to raise these dead, creating a horde so vast surely all the Southern Elven Kindreds will be destroyed.

Corpse-ghouls pour from sand-choked catacombs to join his banner. High above, the dread vampire Lord Malak of Dol Eragos flies upon his Hellsteed, his alliance with Mhorgoth born of some unspeakable pact.

The Elves are on the move, determined to prevent this atrocity. Malatheer, Castellan of Aloss, has ridden to the Twilight Glades in the north to beg aid of the Mage-Queen while his twin sister Malatheen heads toward Borath Lei. Tydarion, the greatest of all Dragonlords, rides the wind to the south, while the High Marshall treads the Dark Path through the spirit world, hoping to reach Borath Lei before Mhorgoth can perform his sorcery.
Armies march. The stage is set for Mhorgoth’s Revenge… 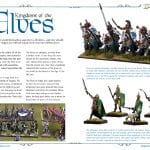 The Mantic Journal 1: Mhorgoth’s Revenge will be available from Mantic Games in May and, if you just simply cannot wait to see what’s in it – here’s a link to a downloadable PDF – just a sneak peek at a few of the pages.