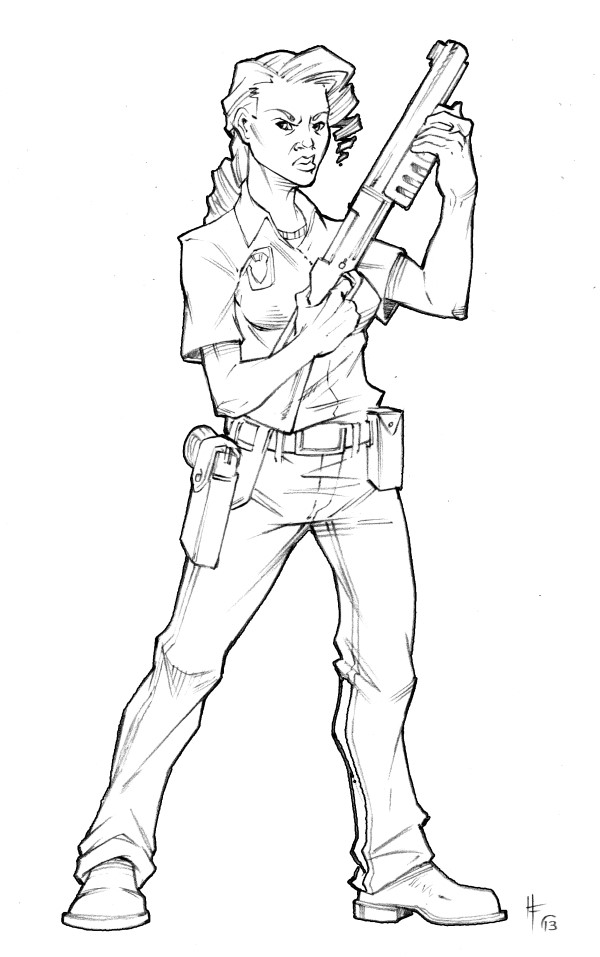 Eva had a tough life growing up. Her family was always on the move, following her father as he chased jobs from state to state. When she left high school, she decided she didn’t want that any more – she was going to settle down somewhere, get a good job and get some stability in her life. Seven years later she was a police officer in Greenville. Thing is, she never realised how boring stability could be. Her day-to-day mostly involves filling out paperwork, driving circuits around the outskirts and sometimes even picking up the occasional drunk guy so he can sleep it off in the cells. Still, she tells herself, it’s better than living out of a suitcase… right?

On Invasion Day she was dealing with one of her few regular customers, a fish-out-of-water teenager named Troy who had a problem with an establishment that barely even existed. He’d been caught tagging the Sav-R-Mart, and she was giving him the usual lecture when all hell broke loose. Now she’s stuck with the kid, doing her best to keep them both alive as Martians tear the whole town apart.

You ever had one of those days? Aliens turn up, wreck your town, and to top it all off, you get stuck carting around a sulky teenager… Honestly, it’s barely worth getting out of bed. Eva’s one of the characters we’d love to add to our upcoming Mars Attacks miniatures game, but that all depends on how much funding we can raise! Make sure you’ve registered at www.marsattacksthegame.com so you can be there at the start, and keep on checking back here and at our Facebook page!