The Men-at-Arms are the mainstay of the Basilean army, fighting in disciplined ranks to support the more specialised units. They’re also the first “hard plastic” (i.e. plastic on a sprue that you can stick together with Plastic Glue) set that we’ve done in ages! They’ve been sculpted digitally, which meant we were able to put this video together before they were finished – we’ve posted it before, but I think it’s cool so here it is again!

Since then we’ve made some minor changes, but on the whole they look pretty similar. We’ve not seen the actual plastic sprue yet – it’s still being finalised by the production guys – but here’s roughly what it’s going to look like! This isn’t the final layout, but the components are all there. 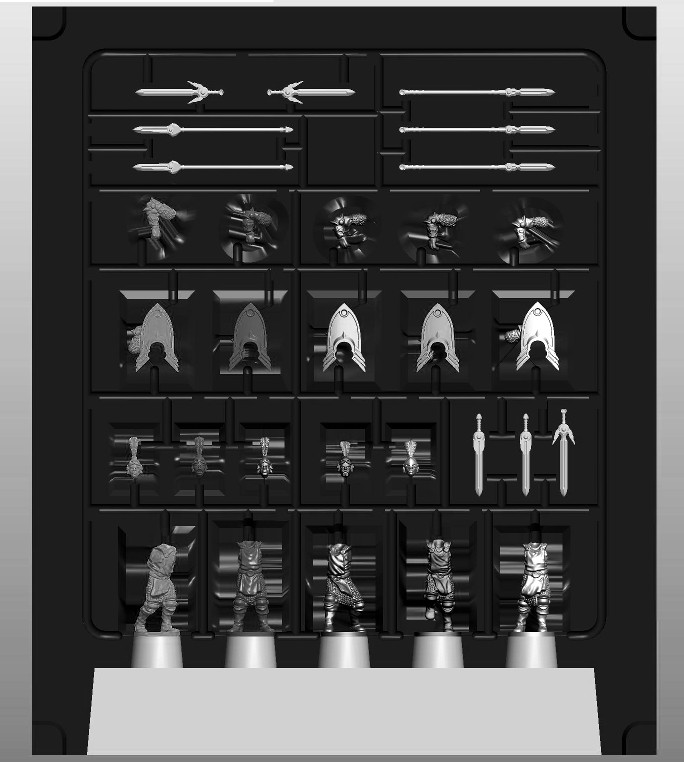 Ignore the colour variations – the whole sprue will be one colour, of course!

The Men-at-Arms, being a mainstay unit of the Basilean force, are available as a Regiment of 20 for £14.99 / $24.99 and as a Horde of 40 for £24.99 / $39.99, each with metal components to add a banner and musician. They’re available to advance order through the website now – click the links for details! So that’s enough shots of black-and-white nonsense – let’s get to the good stuff! 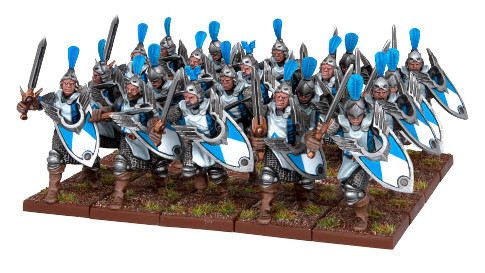 Men-at-Arms Regiment with swords and shields

The Men-at-Arms of Basilea are trained to fight in formations based on their ancient Primovantian ancestors, and the short-sword is one of the first weapons in which they are drilled. These practice weapons are nowhere near as ornate as the ones they will eventually carry into battle; bedecked with angel-wing motifs and with precious stones set at their pommels, these weapons are as much symbols of the wealth and influence of Basilea as they are tools for dealing death.

Although at first glance these basic Basilean troops might not look much different from their counterparts in the Kingdoms of Men force list, there are a few key differences! For starters, they have a higher Nerve value, representing their unshakeable faith and devotion to their cause. Secondly, they have two special rules that don’t apply to their lesser brethren. The Holier than thou! rule makes the unit Vicious when fighting against any unit whose alignment is Evil, and Blessed be the pious gives them the Heal (1) rule – this can only be cast on their own unit, but can always be used in the Shooting phase as long as they aren’t in melee. 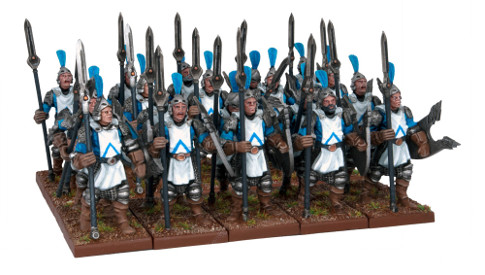 Men-at-Arms Regiment with spears and shields

The Men-at-Arms of Basilea are extremely well-disciplined, trained to fight the most terrifying of foes without breaking ranks. For this reason, their spearwalls are nigh unstoppable. Should a man fall, he is rapidly replaced by another, and tired warriors are retired to the back of a unit to allow them to rest. Through these and other drills, a unit of Basilean Men-at-arms can maintain pressure on their enemy long after the other side has become exhausted.

If you want your Men-at-Arms to have some more punch, equipping them with spears grants them additional attacks via the Phalanx rule. They also become a great defensive unit against cavalry, flying creatures and chariots – if you’re concerned about fast units lapping around your flanks, a couple of units of spear-armed Men-at-Arms will make them think twice. Of course, they also get all of the bonuses that the swordsmen get.

So that’s the Men-at-Arms! Let us know your comments below, and check back tomorrow for more Basilean info!