We’ve been running a competition over the past 12 days to win a signed copy of the Corporation General concept art and the time has come to start submitting your answers!

All you had to do was collect the 12 Tweets and tell us whether the statements/questions are true or false – send you answers to chris.palmer@manticgames.com, and the person with the most right first wins themselves the signed artwork! 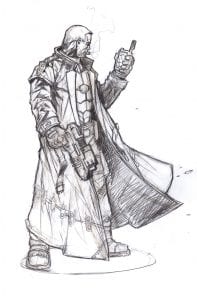 Just for your reference, here are the first ten Tweets:

1) In 2012, Ronnie will be returning to his main hobby of LARPing after a 12 year absence – contact him with any good LARPing sites.

2) In 2012, Orcy will be descending through the gates of hell to gather some new recruits for the Abyssal Dwarfs – are new kits coming?

3) In 2012, Mantic will be doing our best to break our game developers by releasing 2 new games

4) In 2012, finned dwellers of space will cause waves in the industry, featuring goldfish bowl helmets and hydroblasters – fishmen tba.

6) In 2012, Mantic will announce a new license – My Little Pony boardgame and miniatures coming in the summer?

7) In 2012, Mantic Games will be “acquiring” a large new business partner in the model industry – true or false?

9) In 2012, Ronnie will apply for an audition to be part of a New Kids on the Block tribute act < True or False?

10) In 2012, the big book of background, rules and army lists will be coming for kings of war – true or false?

The other two Tweets can be found on our Twitter account here, marked with the hashtag #TTOC. Please submit your answers by the 16th December – winners will be announced on the newsletter, so make sure you’re signed up!