What a week! As of this morning, we’ve shipped 99% of Deadzone Kickstarter orders. This is a massive achievement, and it means that the vast majority of backers will be receiving their package very soon – if they haven’t got it already! Incredible work, and we’d like to thank the army of Pathfinders and volunteers who stepped up to help us make it happen!

Right, on to the main part of today’s post. Enforcers! Throughout this week we’ve been unboxing Deadzone, and so far we’ve looked at the Scenery Pack, the Marauders, the Plague and the Rebs, but now it’s time to look at the real heroes… well, depending on your point of view, of course! 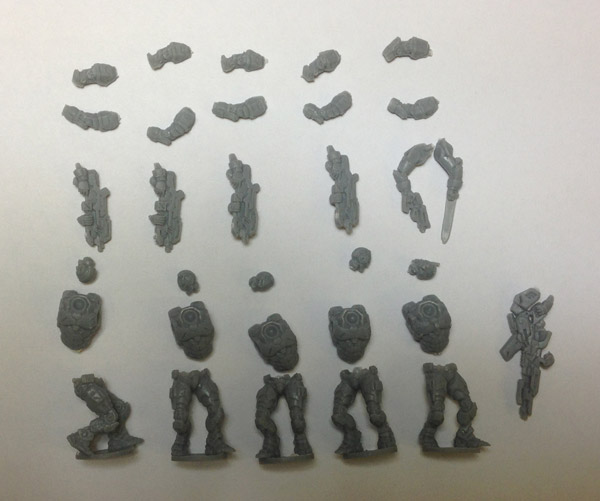 This bag contains five Enforcers and a choice of weapons.

This bag contains a set of regular Warpath Enforcers – if you’ve been following the Kickstarter campaign you’ll know we’re working on putting these into hard plastic, but in the meantime these guys are just the ticket! Sometimes the fit between the legs and the torso needs a little encouragement, but it’s all good – bung both parts in some hot water for a few seconds and press them together, and you should find they fit beautifully! It’s worth noting that one of the left arms is slightly longer than the others (the one on the far right in the photo above) – this is for the Burst Laser (the big gun on the right). Also, note that you get six sets of arms for five troopers – this gives you a bit of variety when putting your team together. 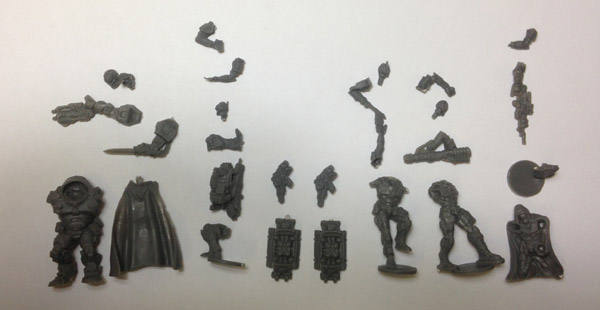 This bag contains the Captain, the Engineer, two Sentry Guns, the Assault Enforcer, the Enforcer with Missile Launcher and the Sniper.

The Captain has a choice of two different heads, based on feedback we received during the Kickstarter campaign. Some people loved the head with the raised visor, while others preferred the Captain without… so we gave you both! It’s also worth noting that the cloak is a separate piece; if you want to leave it off you can do, but you’ll need to remove a small amount of detail at the shoulders (where it attaches). If you heat the model in hot water first, you should be able to carefully remove these pieces with a modelling knife. (Please don’t go slicing your fingers off, though. I’ll feel awful if you do.) Another thing to note is that the Engineer and Missile Launcher heads are similar, but the Missile Launcher has a longer stem. Finally, in the photo above, the Assault Enforcer’s arms are in contact – it might look like one long mega-arm, but they are in fact two separate pieces.

There we go! That’s the Enforcers done. However, there are still a few miniatures that we haven’t looked at yet, namely the Mercenaries!

As these miniatures each come separately, you don’t need to worry about which pieces go with which, but we’ve added a photo for the sake of completeness. They’re all pretty easy to assemble, but Wrath might take a little bit longer. The sprue holds the more intricate parts, such as his sword, his pistol arm and the two straps that hang down over his shoulders. The sword goes across his back – don’t miss it out! If you get stuck, check the photo on the packaging and you should see how it all fits together.

Well, there we have it. Across this week we’ve unboxed all the miniatures and terrain from the Deadzone pre-release! We hope you’ve enjoyed these posts, and that they’ve been useful – if so, let us know in the comments, and we’ll look at doing this for all of our releases from now on!

Oh, I had one more small piece of news before I call it a day – Deadzone is released in retail stores TOMORROW! Some stores that were Kickstarter backers may have already had it on their shelves, but now it’s going to be available to the world! Remember, this is a limited pre-release ahead of the main game launch in February, so get your skates on and head down to your Friendly Local Gaming Store if you want to get a copy. We’ve got a list of Stockists on our website, so have a look if you’re not sure where to get your hands on Deadzone!

Have an awesome weekend, and get some pics of your own Deadzone unboxings up on our Facebook page!