Finish off our week of Dungeon Saga reveals, today’s blog takes a look at how dungeon adventures can be randomly generated. No players, not even the Overlord, knows what is coming. Delve into the Uncharted Dungeons! 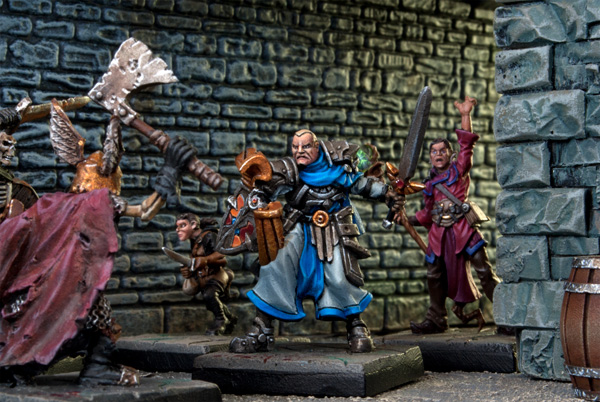 Building Dungeons and Set Up

Uncharted dungeon game start in a similar vein to normal games. You will need 2-5 players, one of whom will be the Overlord, with heroes to match. Alternatively, these rules are fully compatible with the AI rules featured earlier, so you can play against an Invisible Overlord. 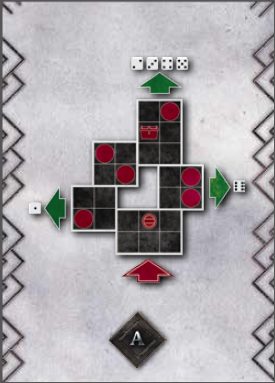 The dungeon is created using the Exploration deck. This is a collection of lettered map cards which show you how to set up the next area of the dungeon. Most adventures will use four, but you can create longer or shorter quests by using more or less cards.

The Overlord takes a random card from each letter (A-H). The first map tile is always a 2×2 square containing the heroes. The first card (A) is turned over and the tiles placed according to the map. Each card has a single red arrow and a number of green arrows. Red arrows represent the entrance to the current area, while green ones are the exit, leading into a new area. Each time the players open a door the Overlord turns over another exploration tile and lays out the map accordingly. The cards also show furniture and treasure for the players to collect. The dungeon expands as the game plays.

The Overlord and Enemies

As with all games of Dungeon Saga, the players are pitted against an Overlord who commands creatures and warriors alike. In Uncharted Dungeon games, the Overlord’s role is very similar. He gets a selection of minions that fight for him and two command cards per exploration card.

These minions are placed using a second deck; the events deck. 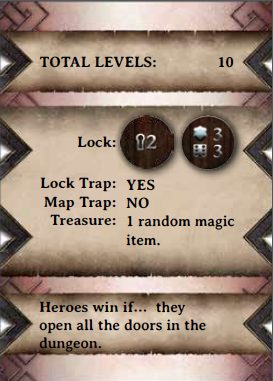 This has many uses, one of which is telling the Overlord how many models he can place in a new area. Each minion already has a level, and the models which can be placed are decided by the total of the levels of those models, which is listed on the event card.

Each Exploration Card shows a number of set up locations for enemies, in the same way that normal scenarios show where enemies should be placed. All of the above applies to any of the different Overlords available, including custom ones, so the Overlord player can pull whatever tactics suit them the best.

The Overlord has access to two bosses as well, which are chosen before the start of the adventure. Either (or even both!) of these may be placed in any zone that isn’t the first of the adventure. On an event card that is either level 3 or 6, roll a single dice – if the Overlord rolls equal to or over the level, then they can place a boss, in addition to any of the other models.

Playing and Winning the Game

The Event cards are the key to Uncharted Dungeon games. They have myriad uses, replacing most of the pre-set aspects you’d find in normal scenarios. For example, when a player moves adjacent to a chest, they draw an Event card to show what treasure they get. When they move adjacent to a door, an Event card will also show them what kind of lock the door has.

Before the start of the game, the heroes draw an Event card which determines their victory conditions – what they need to accomplish to win. This is kept secret from the overlord until it is achieved. My personal favourite is “Heroes win if…all heroes are standing on the final tile when the countdown timer runs out”. Dramatic last stand, anyone?

As always, the Overlord wins if they draw the last command card (the heroes running out of time) or if they manage to cripple one of the heroes. The heroes can win if their victory conditions are impossible, reaching the end of the dungeon – the last tile placed from the last Exploration card – and clearing out the dungeon entirely before they run out of time.

So draw your swords or raise your minions, and step into the labyrinthine depths of the Uncharted Dungeon!

Dungeon Saga: Dwarf King’s Quest is now available to pre-order from your local retailer or the Mantic webstore. Pre-order before the 31st June and get a free exclusive Legendary Mortibris figure.