Well well, looks like after the flurry of Abyssal Dwarf images we had in last week we’ve still got more stuff to show-off!

As with all of our Army Lists and Rules, it is now available for free download in our Gaming section. Grab your copy now and see what changes have been made! 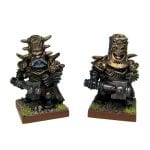 One piece of feedback we would like to mention is the fact that the Abyssal Dwarfs have some expanded options over the other lists. The Abyssal Dwarf list marks the first Army List we’ve created that includes entries for miniatures that we haven’t yet created or would like to make in the future. This is a theme we will be continuing going forward, and rest assured the existing armies will not be left out – look out for updates later in the year! And, for that ever present question of what’s coming next… keep checking out the blog!

On a side note, if anyone has any suggested army builds, tactics or… well, anything Kings of War really, don’t be afraid of getting us in touch using the Contact Us form on the website – we’d love to hear what you guys have to say!