Like we’ve done with Kings of War, the Fate of the Forgestar boxset contains printed Warpath rules and all the stats you need to play with the troops in the box, including rules for all the different BFG heavy weapons and vehicles. Here’s a preview! 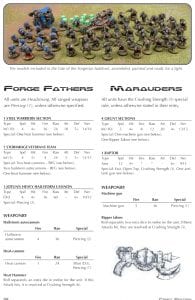 Rumour has it that Alessio has now put the final touches to the first edition of the Warpath rules and altered the Marauder and Forge Father lists accordingly. I’ve even seen a Corporation list floating around! These naturally will be going up for free download alongside the second edition of Kings of War on release date, and the printed copies are included in the Marauder Army Set, army deals and the Forge Father Army Set that is going up for pre-order tomorrow!