The Kings of War Rulebook is going down a storm and we’ve got a host of releases this month to make getting into Kings of War, expanding your army or painting and gaming with your army a breeze – and we’ll be showing it all off this week!

First up is the Two-Player Battle Set… 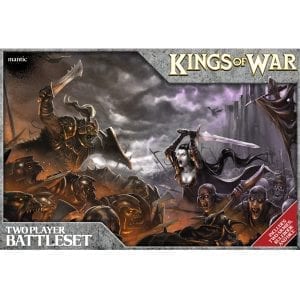 LEAD YOUR ARMY IN A GAME OF EPIC FANTASY BATTLES, WHERE HUGE ARMIES CLASH WITH SWORD, ARROW AND SORCEROUS FIRE.
The mighty Orc horde faces the shambling Undead legions – both armies are ready for battle.

The Orcs are ready to rampage – sneaky bow-armed Goblin Spitters, vicious Orc warriors, and gangs of malevolent Orclings begin to advance, while the orc leader is busy holding back his snarling gore cavalry – waiting for the right moment to deliver their earth-shattering charge.

The Undead legions, animated by evil necromantic magic, await in unnatural silence – ranks upon ranks of Skeleton Warriors, brought back to do their master bidding, rotting Zombies and ravening Ghouls in search of prey, and terrifying Wraiths, spirits of ancient sorcerers who defied death. The Undead are nigh unstoppable, for soon the corpses of the foes will join their own ranks. 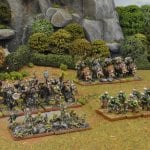 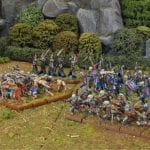 Including 105 high quality plastic miniatures and a 32 Page Mini-Rulebook complete with all of the Core Rules and four sample army lists, this set is a great way to start Kings of War with a friend, get two starter armies for your collection, or to expand your armies with new models!

This set is now available to pre-order and will be released on the 23rd July.