Back in May we revealed the alpha version of our latest Warpath rules. Warpath has gone through various iterations since the initial tests back in 2011, and this latest version goes back to the roots – it is a mass-battle game with abstracted details to make it quick and simple to play – something we’ve had huge success with, as Kings of War fans will know. However, we will cover that version of Warpath in detail tomorrow.

Today we’re here to talk about something a little different…

The feedback on this year’s alpha was varied. The mechanics largely went down well as we’d hoped, and the players who had a chance to test out the rules gave us some really reassuring comments. However, for a portion of our community the rules didn’t provide the gaming fix they were looking for. The Warpath we put out is something quite different, whereas a lot of people were searching for a viable alternative to the other games on the market that they are currently playing, and wanted certain design points of those games carried through to Warpath.

These gamers wanted a game that had more granularity – something that could be played with smaller forces (somewhere from platoon to company level, as opposed to an “army”, but not single squad level like Deadzone) and something that gave more weight to the individual figures, rather than the units. This is understandable – wargaming is a hobby after all, and you will have all spent many hours lovingly painting your models – making them a more integral part of the action is a just reward.

In response, we commissioned Warpath: Firefight. The brief was to take the same objectives that we had with Warpath, and carry forward some of the game mechanics, but build them into a game that ticked all of these boxes – individual casualty removal, more detail, and less abstraction of stats and abilities – a more cinematic game. The game would use fewer figures, and zooming in on the action would alter some of the strategic choices, but the mandate to create a fast, slick, sci-fi game still remained.

The core objectives of the game were to firstly create something that “felt” sci-fi, with a focus on shooting and advanced tech. The game was to be dynamic and reactive, with emphasis on suppressive fire, tactical formations, combined arms, and as much tactical choice as possible. Terrain was to be majorly important both as an in-game objective, and to make the playing field obviously different from other wargames like Kings of War. In between all of these things, we absolutely had to keep the core rules as simple as possible, as you have come to expect from Mantic. These goals are something that we are taking forward with both Warpath and Firefight, but in different ways. 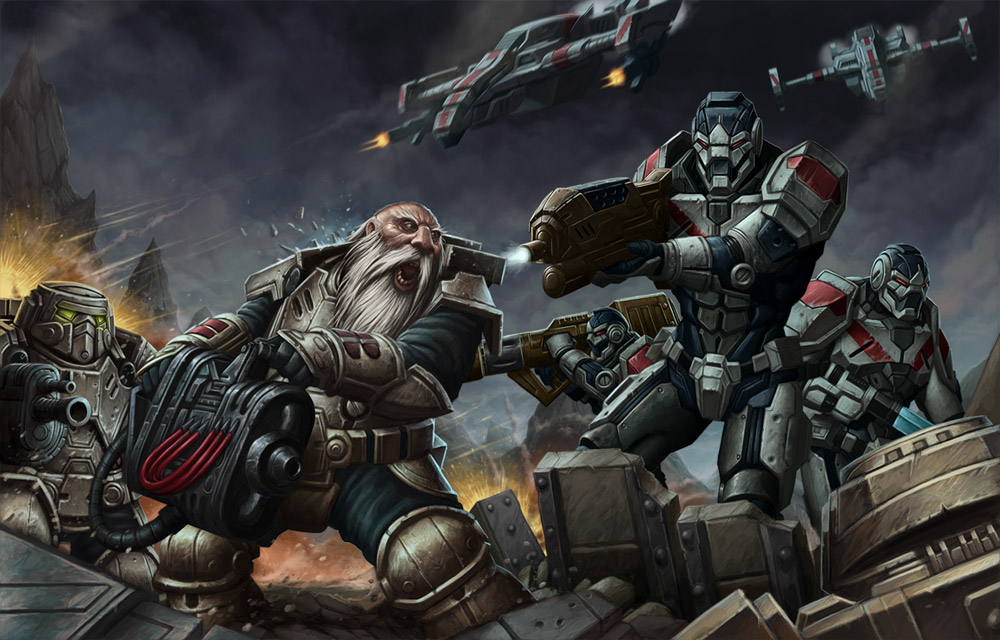 To ensure that Firefight was approached with fresh eyes and to avoid confusing it with the “mass-battle” mindset of Warpath, we wanted it written by a completely different designer to the original game, and who better than Mark Latham? Mark has previously been in charge of Warhammer 40,000 and also headed up the White Dwarf team, so he knows his way around a sci-fi wargame.

Mark is still working on the rules themselves, but he has put together some notes on some of the things to expect from Firefight as opposed to Warpath.

• Every model matters – casualty removal, positioning and variation of weaponry and equipment within a unit are all important.

• Get into the thick of the action, using true LOS, per-model hits in shooting and melee, improved terrain occupying rules, and Warpath’s Orders system.

For those of you eager to try out the Firefight rules, if there is anything else that you want to see, please let us know below and we will make sure Mark sees all of the comments. This game is for you guys after all – we want it to be perfect!

Let us know what you think in the comments below, and check back tomorrow for more information on the Warpath rules!

– About the Warpath Kickstarter