We’re through the closed beta and we’re now out to Open Beta with the First edition rules. This 16-page booklet contains all the rules you need to play Warpath, including rules for vehicles, flyers, special rules and all the key info on moving and shooting with your troops. It’s a simple, easy to learn ruleset for playing bloody and brutal wars across many galaxies. The ruleset will be included for free in the Fate of the Forgestar, Marauder and Forge Father army sets, as well as being hosted on our website here. 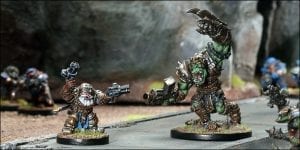 While they are far fewer in numbers than humans, the Forge Fathers are renowned across the galaxy for their grasp of advanced technology. For more on the background of the Forge Fathers, click here.

With the first edition rules now released, the Forge Father army list has been tweaked and included new additions such as Drakkarim platoons, Mjolnir Rocket Launcher and Dragon Breath BFGs (one very good at making things explode, the other very good at melting things) and the defensive Force Dome weapon.

Marauder Orx are cunning yet brutal; a lethal combination of Corporation doctrine and an Orx natural instincts. With the new first edition rules, the updated Marauder army has been tweaked and, with a couple of name changes, is now available for free download here.

We’ve like to thank everyone who helped with the Beta around the world, Beasts of War, Bell of Lost Souls and all of the other forums who have supported the coming of Warpath and we look forward to seeing those of you can make it to tomorrow’s Launch Party (and if you can’t make it, we’ll keep you updated on the Blog and Facebook!). Watch out for today’s newsletter too!