Earlier in the week we asked for your Warpath Kickstarter Questions. You’ll find our answers below! 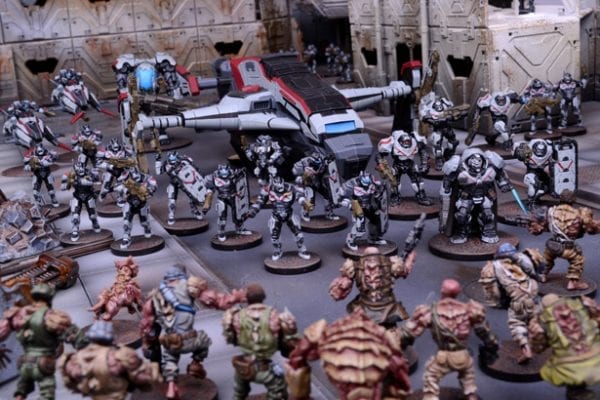 A1) It will be shorter, Monday 21st September until Sunday 11th October.

Q2) will some of the model funded in this KS get rules in DZ??

A1) Definitely, I wouldn’t expect any of the big vehicles to make it across, but certainly any new units or heroes.

Q3) are all the factions from DZ planned for WP?

A3) Where we go wholly depends on where the community can take us, we can only do as much as the funding we get. We will be starting with the Enforcers, Forge Fathers and Veer-myn, as they have the most miniatures available to form up armies with, and we’ll aim to cap them off with vehicles, and a new unit or two. From there, it’s up to the community – we’re seeing a lot of support for Plague, Corporation and Asterians, and if we get far enough we’ll be able to tackle them.

Q4) are there plans for more battlezones in this KS?

A4) There isn’t, no. Would this be something you’d like to see?

Q1) What TIME will the Kickstarter launch?

Q1) Will Plague be a main faction?

A1) Yes – they are one of the greatest threats to the GCPS as we know it, but don’t put it past us to beat them. The Enforcers, Forge Fathers and in particularly the Asterians are very experienced in fighting them.

Q1) Will there be rules for the big gun turret from the Battlezones Defence Line sprues?

A1) We can certainly add some, if people want to see them added.

Q2) Will there be rules for scaling buildings and taking the high ground?

A2) We think this is too complicated for people would play, however in the advanced rules there are additional mechanics for how to interact with buildings.  Firefight will almost certainly have it. For taking the high ground, that’s covered by the Height element in the line of sight rules.

Q1) Will both these rulesets be included in the rulebook?

A1) Both rulesets will be included in the pledge levels, as two separate books.

Q2) are you going to honor the vouchers for the warpath rulebook that you gave out with warpath army boxes a few years ago? (i’ve been saving mine just in case.)

A2) Yep, customers who have a voucher will be able to go in store when it’s available and get it. There’s no way to make them apply to the Kickstarter sorry.

Q1) Will warpath have a separate rulebook to firefight? or will the game (and hopefully some of the stats & rules)be folded into the one rulebook.

A1) There will be two separate rulebooks.

Q2) there has been previous rumours concerning a marine vs z’zor starter set, any news on this?

A2) This was an idea we had for a future edition of Deadzone.

Q3) Essentially with warzone we would be getting miniatures that can function in 3 different games (deadzone (if rules are included which I can only beg repeatedly for), warpath and firefight. What about rules that could be played over various miniature ranges? How does warpath scale up to ‘BIG’ battles? Would mantic consider producing a 10mm range?

A3) Warpath scales up quite neatly due to the system of building squads out of teams, we’ve played games with as few as 30 miniatures aside, and as many as 150 miniatures a side, and it stays rapid, it’s very enjoyable. It’ll go bigger than that quite comfortably. Regarding a 10mm range – that’s very interesting! We’ll have to see. Regarding a miniatures line, well, if there’s every enough demand for something, we generally do it!

A1) Interesting! I’ll have to set the studio boffins off to investigate that one. If you’re wanting a decent playing surface though, I recommend the Tablescape Secret Weapon plastic boards!

Q1) Will we see at least some sort of presence from the “expanded” races like the cyrstallans, Sphyr, etc? Understandably they may not be separate armies, but will they have unit options?

A1) In the rules, it is likely that there will be unit options to represent some of the more obscure races in the Warpath universe. There are no plans for new miniatures for these races during this Kickstarter however.

Q1) So this still uses same scale as firefight?

A1) Yes, both games use the same range of 28mm miniatures.

Q1) Are we going to have an open beta?

– About the Warpath Kickstarter