Huzzah, released at the end of this week are the Ironwatch which, as you all know by now, can be built to carry either rather snazzy rifles or very dangerous crossbows. Well, that’s what the dwarfs like to think anyway, rumours have it the cannons are rather more dangerous.

Anyway, last week we had the very first sprues of the Ironwatch in so, for the first time, we can show off the 28mm scale plastics!

Check out the thumbnails below for a look at the sprue and to see what some of them look like all built up – we couldn’t resist having a go with the clippers and glue! 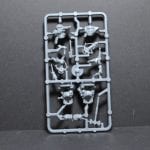 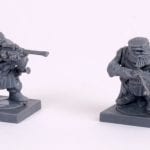 The Ironwatch are released Friday 23rd July in both Troop and Regiment (includes the Dwarf Command sprue) varieties and are also included in the Storm of Iron Detachment, Dwarf Warhost and you get 40 of the blighters in Grafe’s Steel legion!

Why not drop us a comment below and let us know what you think!