Week of the Living Dead – From the Sculptor's view Part 4

Yup, it’s the worst kept secret in wargaming (so far anyway…): Mantic are going to be releasing brand new plastic Zombies for the Undead range.

This week on the blog is dedicated to this brand new set and we kick off with an interview from a certain Mr Naismith, the sculptor of the Mantic Zombies. We even have a sneak preview of one of the figures, just one of the variations you can make with the set. Over to you Bob…

“Once again Mantic gave me a great brief –‘Make us some Zombies Bob’ they said.

So – a bit like the ghouls previously we examined the way that zombies come about- the fact that they are genuine undead and apparently mindless, though not necessarily slow. With the waist join that we used in the ghoul set we decided if it aint broke, don’t fix it… so we kept that design – of course this means that the two sets are crossfitting so there is a lot of kitbashing opportunity out there.

Needless to say the Zombies gave us more opportunity to build a Mantic version of the zombie niche imagery – naked or near naked humanoid bodies, bones and muscles exposed across their forms, creeping,walking, shambling or indeed shuffling towards the enemy with undead determination (whatever that means!)

Here’s a little preview of one of the three-up sculpts (keep checking back over the week for new and better images – this one is the only the beginning!) 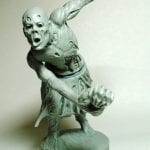 Also we had another chance to inject some humour into the set. The idea of the semi-bodied zombie arose from the idea of the ‘unstoppable’ attacker who just keeps coming at you no matter what! So we added a ‘no legs’ base to carry the torsos and the obvious partner for this, the spine sticking up from a set of legs option (ED: you’ll have to check back to a later blog to catch a glimpse of these!)  Yes I know that it’s a wee bit of dark humour but after all the idea of zombies is a little on the dark side anyway – we wanted to lift the tone a bit with these innovative additions – which also make the set very 3D when ranked up you’ll find.