Kings of War is where it all began…

Obviously the big story of the year has to be those 2 fantastic Kickstarters! They have changed everything, and the support we received was just unbelievable. When we set the Kings of War running we had no idea that 28 days later we would be commissioning 22 new tools and units in plastic, including Werewolves (John!), mummies, trolls, chariots, fight wagons, an Abyssal Dwarf unit, 4 cavalry units (including Dwarfs on Killer badgers!) and many more – enough units that would allow us to nearly finish off all the races we had begun. As if that wasn’t enough, would also have enough to tool the complete Ogre mercenary army AND 6 units of the first human faction! 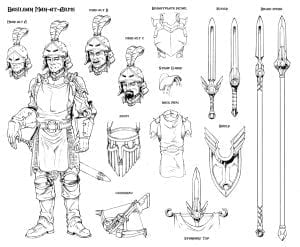 When you add to that 2 new books, one novel and a heaps of hero sculpts and Kings of War has got a seriously big boost going into 2013. With our first of many tournaments coming up and all of that to release 2012 has to go down as a defining year for our mass combat fantasy gaming system – which also offers very nice and affordable miniatures for other gaming systems some of you might play 😉

And then there was DreadBall!

Who knew? We did know that the whole studio had pulled of something incredible, the cover art, the layout, concepts, painting, logos, the new web site, and board were all top draw – and of course we loved the game by Jake, and the miniatures from Remy were brilliant, but we had no idea that when we asked for some support we were going to be the second biggest UK Kickstarter ever! I don’t think any of us have ever felt that tired, or pleased with the results, as we did when that campaign ended. 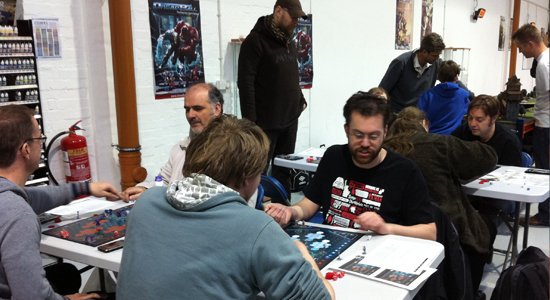 Check out our ever-expanding Events Calendar

Since then, the last 3 months have been a blur – we sold out every single copy of DreadBall we printed, and more are on the way (just 3 weeks now!) and it has shipped all around the world – and thanks for your patience on that. We are also getting on with 8 more teams and the MVPs, coaches, and cheerleaders! We have also had a wonderful response for the community at large that want to pick up and carry this system, for both tournament play and as a club game, and we are in the process of giving over the management of the DreadBall.com site to people who will do a far better job than we can! The launch of DreadBall has exceed all our dreams, and yet again it has been in large part to the help we had from so many people – I can still remember a fantastic piece of art (that I hope we can use in the forthcoming books) appearing on Facebook about 2 hours after the Judwan were announced.

In case that wasn’t enough in the early part of the year we brought out the 3rd and 4th races for Warpath, and a number of new kits for the ForgeFathers. I think once a system has 4 races it can start developing as a system, and again that seems to be the case. We also released Warpath version 2.0, and it plays much more smoothly. The mini rulebook was well received and there is a really nice 80 page version available to download.

Warpath is building (and I think the corporation and Z Corp both seemed to offer the wargaming community at large a great chance to add some reasonably priced sci-fi armies to the gaming table). However, I don’t think Warpath will really fly until we get some tanks and more vehicles for each of the first 4 races, plus at least another couple of armies. I do believe with this support and some more tweaking and balancing of the rules this will become a fast, quick challenging mass combat sci-fi system, and I look forward to working on getting it there.

Well the ‘and…’ section is always the most fun. This year has been all about meeting people – both online and face-to-face. We have set up so many connections that will start to bear fruit in the years ahead. We started a conversation to get a small and fun licence that I hope we will be able to announce soon, and have tie-ups with so many great organisations – the team at Adepticon, Penny Arcade, GCN, Salute, the online bloggers and website and our distributors and our retailers. To all of them, and to our pathfinders and all the staff at mantic – and most of all to everyone who supported us – at one of the shows, by backing us, or buying some models, or even recommending us or liking us on Facebook – thank you. Your support has made 2012 a milestone year in the development of Mantic Games, and looking forward to many, many more.

Best wishes, and thank you