So what’s been keeping me away from you all? I’m sure it was something important… 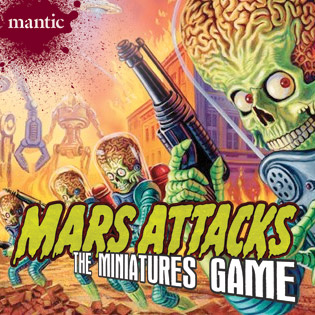 Yeah, the Mars Attacks: The Miniatures Game Kickstarter campaign has been an absolute blast, and it’s going strong! Backers all around the world have been helping us plough through stretch goals like there’s no tomorrow, and with the incredibly special update that’s just gone out, that’s just going to get even more crazy!

Special update, you say? Why, yes. And what an update it is.

To commemorate New York Comic Con (where the Topps stand will have plenty of Mars Attacks miniatures to show off!), we’re putting up a special this-weekend-only pledge level: Bloodshed on the Battlefield. This ridiculous pledge level includes one copy of Mars Attacks: The Miniatures Game (currently including 13 Martian Grunts, 9 US Soldiers, Ashley, Eva, Buddy, Brandi, Joe, General Tor as well as a Rulebook, standard Mat, Card Counters and 54 Card Deck) PLUS $325 worth of Core Add-ons of your choice, PLUS all applicable goals and stretch add-ons, for just $300!

What’s more, the update also contains the Mars Attacks: The Miniatures Game playtest rules! Backers have been clamouring for these, so we can’t wait to see what people make of them. They’re basic for now, just enough to give people a taste of how the game works, but we’ll be adding more exciting stuff – heroes, flying saucers, big guns – very soon indeed! We’ve also put up a thread on our forum where people can give feedback on the rules – check it out over here.

So that’s what’s been going on! I’m off to get back to the dozen things I’m currently doing, but before I go I’m going to leave you with this awesome sketch that was sent to us by Kickstarter backer Antonio Delgado – this was done by his daughter, and I reckon it’s pretty awesome!

Amazing work! Based on a certain comic crossover that we’re hoping to recreate in model form…

That’s it from me for now. I’ll be back on Monday, but until then, head over to the Mars Attacks Kickstarter page and pick up a Bloodshed on the Battlefield pledge while they’re still available!