DreadBall is the two-player miniatures sports game by Mantic Games, and written by Jake Thornton. It pits the Trontek 29ers against the Greenmoon Smackers in the bloodiest game of the season. Super strikes, deft dodges and sizzling slams are all defining moments in the game, not least when your opponent scores a 4-pointer or kills one of your players out-right. This is a violent, bloody sport where speed, skill and strength are everything! 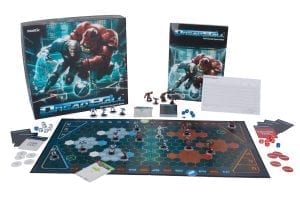 Sounds great right, but what does that actually mean?

Well, firstly, DreadBall is a sports game – it’s by its nature very competitive.

The game is broken down into 14 turns known as rushes and each player gets 7 of them each to score as many points as possible. Get ahead by 7 points at any time during the game and you’ve won by a landslide, though the highest scorer at the end of the 14th Rush is the winner. No one likes a draw so the game goes to Sudden Death if scores are still equal! And, of course, an opponent can’t score if there’s no-one left to pick up the ball, which is where the violence comes in! 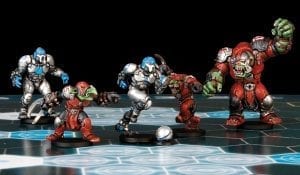 This then means there are a variety of strategies – do you block your opponent and try and take out their strike scorers? Do you instead go on the offensive and go for the risky high-point Strikes in a bid to end the game early? These are only two ways to play, and the variety of teams (and their stats) means there are numerous strategies and even greater variations between them.

Being a sport, DreadBall lends itself to organized and competitive play and includes a built-in League Section detailing how you go about setting up and playing in an organized fashion. We’re already talking to an incredible number of tournament organisers about setting up an event near you so you can get in on the action!

DreadBall is now available to pre-order. Order before Friday 30th November and get a free limited edition Wildcard.