Who are the Corporation?

A time of war…
The galaxy is burning. The malevolent human Corporation is expanding its sphere of influence, annexing more and more star systems to its territories, bringing every alien civilization it can under its control. Or, if this proves impossible, exterminating them.
The Corporation’s strategy is to make contact with alien civilizations and dazzle them with humanity’s superior technology [Note: Only 27 species have so far been encountered that possess higher understanding of the sciences than the Corporation]. Appearing as benefactors, Corporation diplomats will offer massive technological help to these planets: new forms of power, transit, communication and all the benefits a thousand year old technological society can bring.
Very few peoples turn this down.
Offered membership “as equal partners” in the Great Galactic Co-prosperity Sphere, these new worlds will at first be optimistic and proud of their status, but over time they discover the truth. Their societies undergo massive, traumatic change, overthrowing whatever customs and governance they once possessed in return for the bland, pan-galactic culture of the Corporation. Worse, what is initially offered free in the spirit of common sentient interest does not remain so for long. Soon the incorporated culture will be dependent on Corporation goods and services, and bled dry to pay for them.
Turned into little better than puppet states, these slave-societies are drugged by the cheap, get-rich-quick attitudes of Corporation culture, and will gladly devote all of their planets’ resources to enriching the Corporation and the few local bureaucrats that run the business for it, while the majority of the population plummet into a state of poverty and servitude. 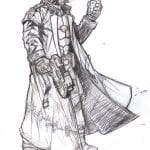 This form of cultural imperialism takes time, and it does not always work. Sometimes the most primitive culture can see through the baubles the Corporation offers to the truth. Other times, a civilisation may be too savage, too advanced or just too damn alien to risk bringing in to man’s great galactic family. In these cases, the Corporation will deploy its considerable military might. Full-scale invasion and subjugation has been the fate of many, even complete annihilation if a race proves too troublesome.
Well trained and equipped with the best in military technology, Corporation Troopers are worth scores of the warriors of less advanced cultures. The Troopers’ armour is often invulnerable to the natives’ weapons, leaving them free to mercilessly mow down scores of the enemies with pulses from their laser weaponry. Indeed, a great many Corporation recruitment videos glory in human troops slaughtering spear-waving “savages” for the betterment of the cosmos. If they encounter heavier resistance, the Troopers can bring the awesome firepower of their tanks and powered exoskeletons to bear. In dire circumstances an expeditionary commander may petition Corporation Central to unleash their most specialised force who will quickly dispatch even the most stubborn of foes. 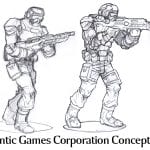 A system that has been cleared of hostile indigenous aliens is ripe for re-colonization by the humans that form the largest part of the Corporation’s population. More often than not they too are oppressed as they strip the place of its natural resources.
From its ancient beginnings on the Solar System, the Corporation has spread like a malignant cancer across the galaxy, covering entire sectors in its tyrannical rule and suffocating any attempt to live free of its clutches. Their expansion continues, but the galaxy is a big place. The Corporation is not the monolithic entity many think it to be, and suffers tensions between the great Houses and Companies that comprise it. And all those pampered, rich men who debate and bicker in the sterile halls of Corporation Central share one, deep-seated fear: that sooner or later the Corporation will meet its match in the unexplored expanses of deep space…