Many of you know that the Clash of Kings Tournaments are coming next year – but we have something very special planned!

We believe that Kings of War is a fantastic gaming system. However, we also realise that switching to a new game is a big commitment – so we wanted to offer a reward that recognised and sweetened that effort (don’t forget you can always use your miniatures in other gaming systems too ;)!

We are offering a once-in-a-lifetime cash prize pool of £1500 for both the UK and the USA Clash of Kings Tournaments. 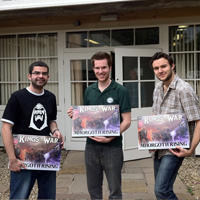 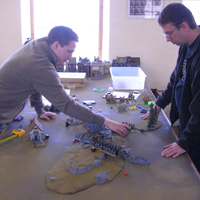 Clash of Kings UK National Tournament
Held on the 8th/9th February 2013 at Maelstrom Games’ Eye of the Storm, you’ll play six exciting 1800 point Kings of War games across two days in the first Mantic Kings of War tournament – using the brilliant new Hardback Rulebook. The USA tournament will be held during Adepticon in 2013, and the exact format will be finalised nearer the time – but the prizes will be exactly the same format (excpet it will be in dollars, not pounds!)

While we don’t think playing your favourite hobby for money is necessarily a great plan, because these two are the inaugural Clash of Kings tournaments we really want to help hobbyists make the switch to this gaming system. The more people that do, the more people we’ll all have to play against!

Here’s the breakdown of the prizes:

Kings of War is at home with both casual players and competitive gamers and we will also have prizes for Best Painted Army, Most Sporting Player and much more!

There’s no reason for not playing, so download your tournament pack here. If you’d like to know more, Ronnie’s made a last minute dive in front of the camera and produced this video here!

I’m in – where can I get my ticket?
Tickets for the UK National are now available from the Mantic webstore at a special launch price of £12.49 which includes entry to the two day tournament and lunch on both days. You can also download the official Clash of Kings Tournament Pack here.

As we have said we will also host a Clash of Kings US Tournament at Adepticon in 2013 (Date TBA) where there will be a prize pool of $1500 up for grabs and we’ll have additional prizes and hopefully loads of fun as well – so look out for a future newsletter for more details!

Need an army? Then check out our Kings of War Kickstarter project – the best deals and the most amount of free miniatures we’ve ever given away!