You've got a nerve!

Mantic’s Kings of War Tournament* is coming this weekend and all the guys have been getting to grips with the 2nd Edition rules and the 3 new army lists (I’m taking Twilight Kin with Undead allies – me and beardy have never really mixed, but we’ll see how it goes!), 75 new units and special characters as they make their bid to become winners of the first Invitational Tournament.

One of the new things that players have been commenting on is the new streamlined Nerve system, and to know more, who better than to ask the man behind the rules: Alessio Cavatore!

The new Nerve system is the same as before, but is now even simpler with no charts and less calculations: EVERYTHING IS IN THE STATLINE! So, when you damage a unit, you roll 2D6 + current damage and get a total. 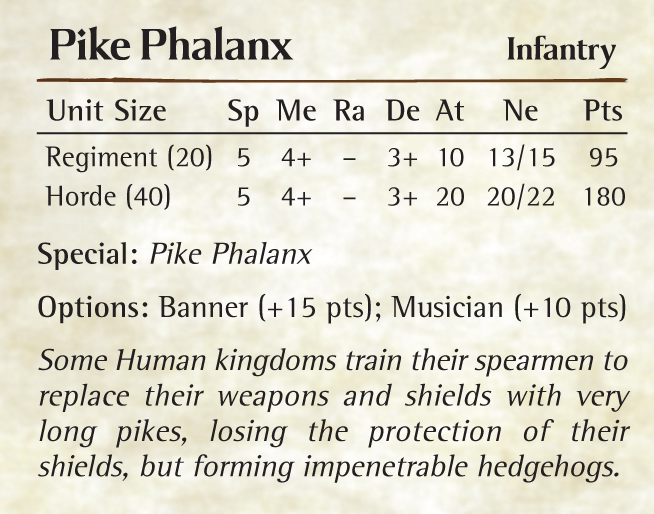 Pike Phalanx is just one of the many new special rules in the new edition, and is exclusive to the Human list

Of course, a Nerve of 15 isn’t massively high so you better keep one of those Army Standard Bearer’s handy!

*Note: there are still one or two places remaining, so contact us at info@manticgames.com if you’re in the Mansfield area and want to play. Alternatively, why not pop in and see us in the evening where we’ll have Dwarf King’s Hold and even some Warpath previews!