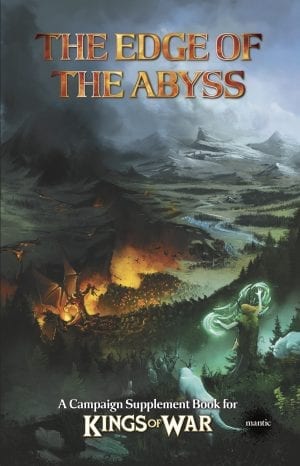 Edge of the Abyss – Kings of War Summer Campaign Digital

Please note this book will not work with the current edition of the game.

Edge of the Abyss is a global campaign that will see the map of the world change, depending upon whether good or evil triumphs on the battlefield. Throughout the summer of 2017, we will be collecting the results from battles around the world, which means that you can decide the fate of Mantica. You’ll also find brand new heroes, new units, formations and more to bring your games of Kings of War to life.

New Heroes
Rules and background for 14 new Living Legends from factions all over Mantica, from Artakl the Gekkotah Clutch Warden to Dravek, the Abyssal Dwarf Iron Caster, these heroes can be included in your forces during the campaign.

New Formations
Combine certain units in a battle for a bonus on the tabletop. These formations were created by the Kings of War Rules Committee and are built upon the existing background for each race.

New Scenarios
Fight in different battlefields across Mantica, from the Elven Twilight Glades to the Edge of the the Abyss itself! These specialised scenarios set the stage for the most pivotal battles of the campaign.

New World
You can record your results during the campaign through Beasts of War . Based on those results, the world of Mantica will change!

Please note this book will not work with the current edition of the game.