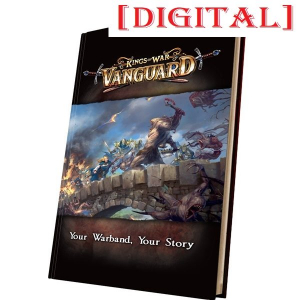 Vanguard is a fantasy skirmish game. It is a magical place, full of wonder, but also one of conflict and war, as almighty armies clash and empires crumble. Gods and demons roam the world and the skies light up with the crackle of magic. The mortal races strive for dominance across the vastness of the world; from the depths of the oceans, across to the deserts and plains, to the soaring mountain ranges and ice-covered peaks – there is adventure, glory, and peril to be had in equal measure.

Vanguard gives you the chance to explore the world through the eyes of an elite Warband. As neighbours and kingdoms wage war, it’s often the deeds of a hand-picked few – specialists in their trade – that ultimately win wars for their masters. Whether they are tasked with plundering an enemy camp, burning their stores, stealing information or assassination of an enemy commander, the scouting parties of the vanguard are always in the thick of the action, operating alone and in the greatest of danger.

This book includes all of the core rules for playing Vanguard, including unit entries, scenarios, campaign system, advanced spells and abilities, and rules for tying your games into Kings of War! 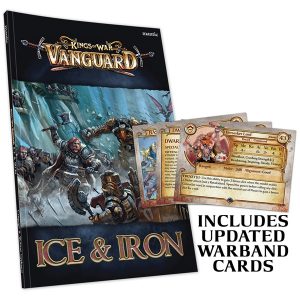 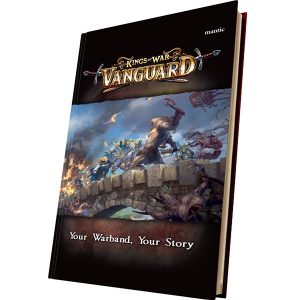 Something stirs in the Winterlands. In the frozen north of the world, the enigmatic Northern Alliance maintain their long vigil, watching the wars of the world from their fortress city of Chill and biding their time. Now, suspicious eyes fall on the cold city, ancient forces turning their attentions to the hidden power lurking there.

Be the first to review “Vanguard: Ice and Iron with updated Warband cards” Cancel reply