With The Walking Dead Wave Four on the rapidly approaching horizon, we thought we’d highlight some of the cooler items you’ll find in the boosters and expansion. 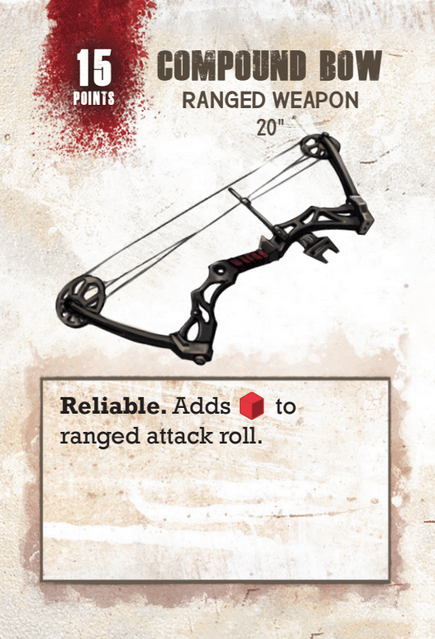 Compound Bow (Made to Suffer) – The Compound Bow on the surface is standard ranged weapon. It has the reliable keyword(which allows you to re-roll ammo rolls) and add one red dice to your ranged attacks. What makes this standout weapon, however, is that unlike the many other firearms in the game, it is silent. Firing this weapon does not cause Noise or Mayhem. 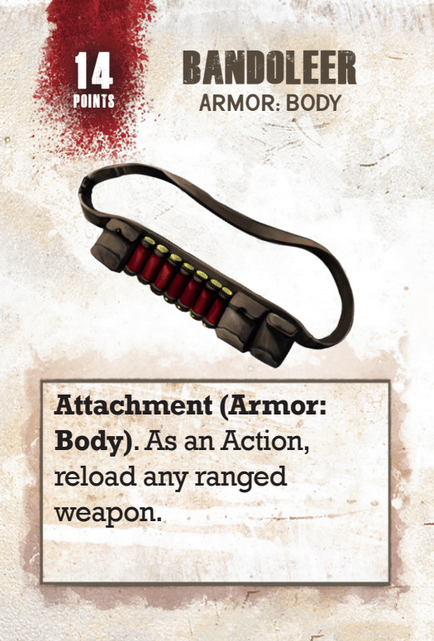 Bandoleer (Made to Suffer; Michonne, Vengeful Hunter Booster) – Wave Four is all about firearms, which makes the Bandoleer a must-have item for gun nuts. It basically a re-usable Ammo Reload that you don’t discard. So, with this you can keep on firing until you attracted every walker within a half-mile radius. Maybe you should take a Silencer, too. 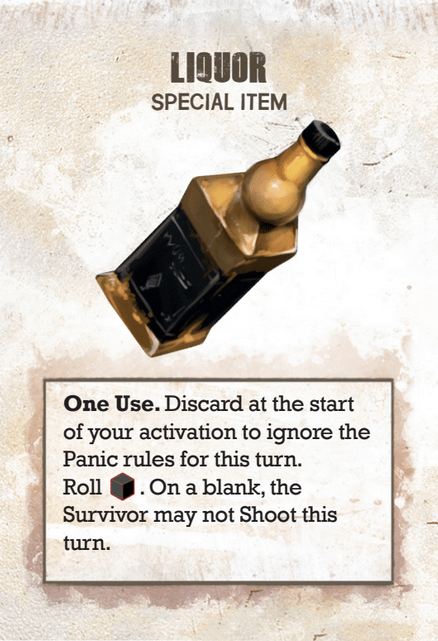 Liquor (Made to Suffer) – Liquor is an odd item. It can be really useful in a pinch – when one of your characters starts panicking. Discarding this card allows you to ignore panic, but you must roll the black dice when you do. On a blank, your survivor is drunk and cannot shoot this turn. 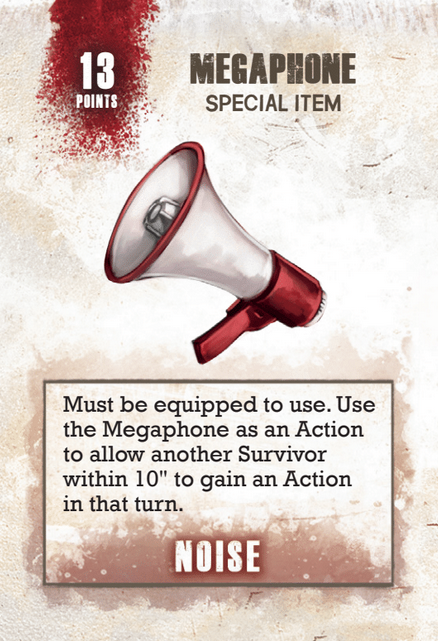 Megaphone (The Governor Booster) – The Megaphone is used by the Governor a lot during the assault on the prison. While it make noise, it allows him to give one free action to another survivor with 10”, at the cost of one of his own. 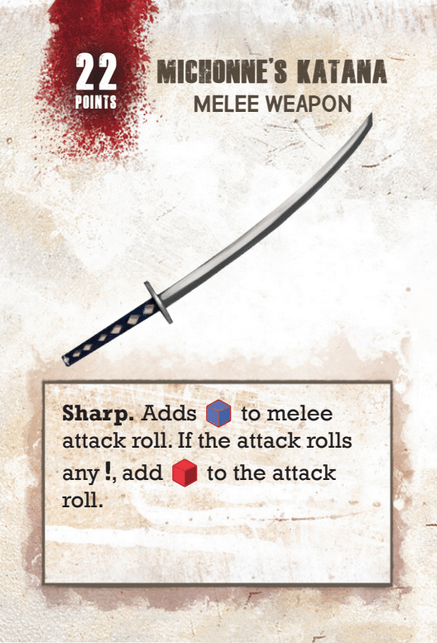 Michonne’s Katana (The Governor Booster) – Michonne’s Katana is taken by the Governor shortly after the Survivor’s reach Woodbury. This dangerous weapon has the Sharp keyword, as well as adding a Blue dice to you melee rolls. Any rolls of ! will add an extra Red dice to your attacks, too. This sword is lethal no matter who is wielding it. 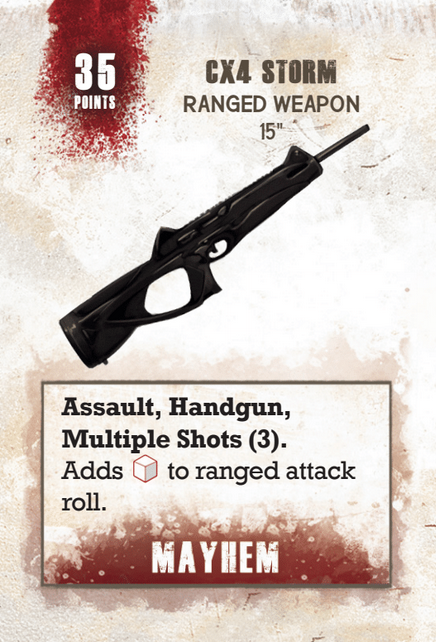 CX4 Storm (The Governor Booster) – Along with Michonnes’s Katana, the Governor also has his own powerful weapon – the CX4 Storm. This is 3 shot handgun with a relatively short range of 15”. It’s an Assault weapon, so you gain an extra shot when you fire at a target within 6”, plus it adds a White dice to your attacks. Truly devastating at close range. 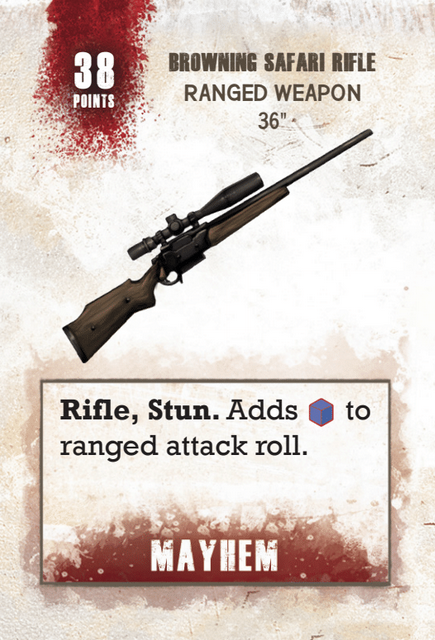 Browning Safari Rifle (Lilly Booster) – The Browning Safari Rifle carried by Lilly is an excellent weapon for controlling the board. With a long range of 36”, you’ll be able to target almost anyone else on the board. The control come from the Stun keyword, which marks any hit survivors as activated – denying them crucial actions as you see fit. It also adds one Blue dice to your attack roll. 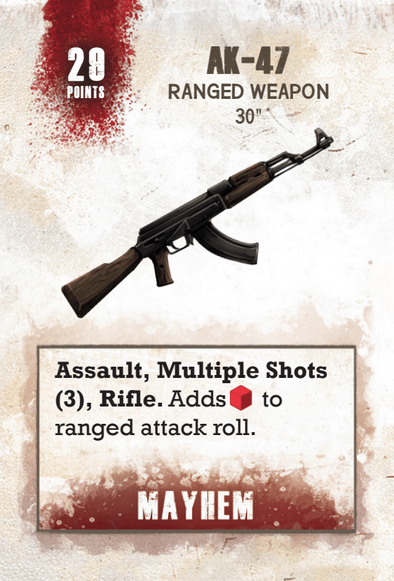 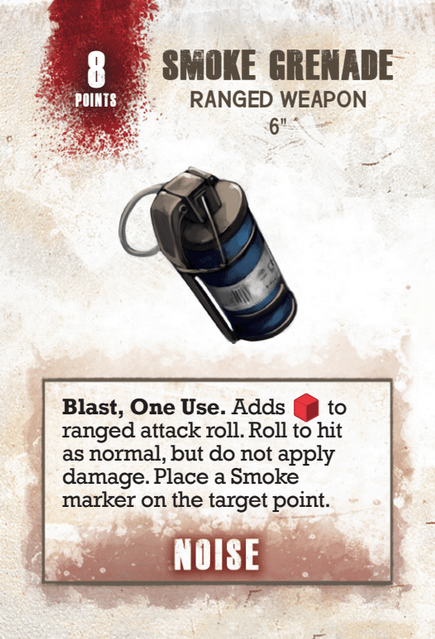 Smoke Grenade (Made to Suffer, Lilly Booster) – The Smoke Grenade is a new item for this wave. It utilises the new Smoke Keyword, found in the Made to Suffer Expansion. This mechanics drops smoke templates which are treated as blocking and area terrain while they are present, as well as providing heavy cover to those caught inside. Smoke also creates Noise at the beginning of each action phase. At the end of each turn, you roll a black dice to see whether or not the smoke dissipates. 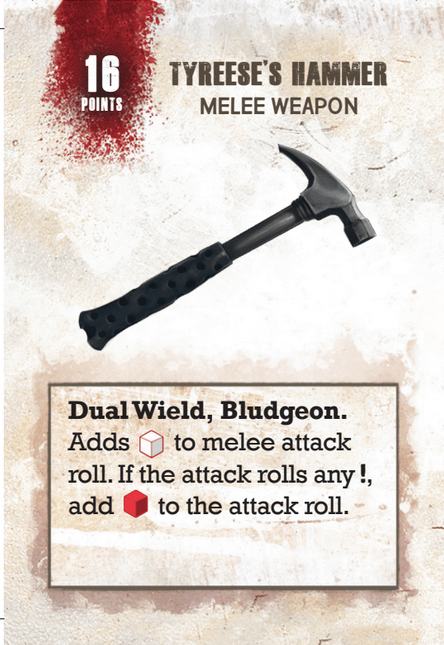 Tyreese’s Hammer (Tyreese, Prison Advisor Booster) – Tyreese’s Hammer is similar to Michonne’s Katana. They both add a dice to your attack,along with extra dice if you roll !. Tyreese’s hammer also has Dual wield, which allows him a re-roll if he is carrying another dual wield weapon and Bludgeon, which gives you a chance of knocking an opponent prnes, should they survive your onslaught. Coupled with Tyreese’s own abilities, this can be very powerful indeed.

You can pick up all of these cards by pre-ordering The Walking Dead Wave Four from our website or your local retailer.