Welcome to the first of our faction focus blogs for Armada – the game of epic naval warfare. In the run-up to release, we’re going to be introducing the four launch factions, along with their key ships. Today, we’re kicking things off with the pious Basileans.

Basilea is the greatest nation of men in Pannithor, and possesses arguably the best human navy. Their ships are certainly a sight to behold, with brilliant white sails and sculpted golden prows proclaiming their devotion to the Shining Ones.

Characterised by massive ships of the line, supported by an array of smaller, more specialised vessels, Basilean fleets are unlike any other human warfleets in both appearance and battle tactics. Like all human warfleets, however, the Basilean Navy depends upon sail for its speed and manoeuvrability. Their sailors are expert in bringing vessels alongside the enemy, or even crossing their bows, so that the gunners might unleash several decks of thunderous broadsides, delivering the divine wrath of the Shining Ones to their foes. Indeed, of all human fleets, it is the Basileans who both pioneered and perfected the tactic of breaking the enemy line, developing the Dictator-class warship for just that purpose. For the Basileans, victory alone is not enough – the enemy, should they be faithless, must be destroyed utterly.

Much like on land, the Basileans dedicate all they do to the gods. Some liken the Basilean ships to floating temples, which in the case of the larger vessels is literally true. Priests are assigned to every ship, blessing cannon-shot as it is loaded, and filling the crew with a sense of righteous piety as they go to war. In battle, the Elohi swoop overhead, their battle-hymns inspiring zealous fervour within the faithful, and dread in the wicked. Their most famous warships are emblazoned with names like Wrath of Domivar, Kolosu’s Glory, and Hegemon’s Fury – names that evoke a solemn and reverential pride in their crews, who would rather fight to the last sailor than abandon one of these glorious vessels.

The Basilean fleet relies heavily on the deployment of large line-of-battle ships, laden with heavy cannon. These vessels are square-rigged sailing ships, with robust hulls and tall aftcastles, offering their captains commanding views of the seascape before them.

The largest and most powerful vessels in any human navy, these incredibly rare ships are a sight to behold. Despite their four masts, they are heavy and slow compared to other Basilean ships, though their lack of manoeuvrability is somewhat offset by their inverted bows – a design inspired by the Ophidian river fleets. This lends these behemoths of the seas extra protection against raking fire, and enables them to cut through choppy waters with relative ease. At the stern of the Dictator-class stands a high aftcastle, from whose many towers and ramparts the commanders signal orders to the rest of the fleet.

The firepower of a Dictator-class is formidable to say the least, and their crews amongst the most disciplined in the fleet. Their three-and-a-half gundecks can bring to bear broadsides of more than 30 cannon, firing in an interrupted sequence. When the smoke clears, it is an exceptional foe indeed that has not been reduced to driftwood.

Not floating temples per se, but floating convents, these vessels are the chosen warships of the Sisterhood, and where they sail the enemies of the Shining Ones shrink in fear. From the aft-chapels, gigantic brass pipes fill the air with the stirring music of the heavens, inspiring all around them to greater deeds in the name of the gods. The Sisterhood not only make excellent and diligent sailors, but also first rate marines, rightly feared for their prowess in boarding actions. Armed with flails, glaives and bows, these fearless light troops have many times proved the match of numerically superior crews, and Abbess-class battle ships often attempt to board enemy vessels rather than exchange broadsides.

Sometimes, the Sisterhood go to battle at sea alone, eschewing the assistance of the Hegemon in their righteous crusades. In these instances, entire fleets comprising Abbess-class and Gur Panther ships sail to war, whole Orders of the Sisterhood mobilised to bring their holy wrath upon the enemy.

Much like their namesakes, Elohi-class ships provide a light of hope in the darkest times. Upon the prow of each vessel is a heavenly beacon, whose blue flame burns for as long as the Elohi grace the Basilean fleet with their beatific presence. Only when the last Elohi falls in battle do the flames flicker and die – a very rare occurrence, for the angelic warriors of the Shining Ones are mighty indeed.

Some of these swift, manoeuvrable twin-masted vessels are doubly blessed by the Elohi, their golden chasings thrumming with the power of the aegis, turning aside cannonballs and even destructive spells.

ARMADA IS AVAILABLE TO PRE-ORDER NOW FROM THE MANTIC WEBSITE OR FROM YOUR LOCAL GAMING STORE. 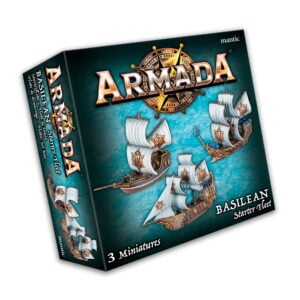 Basilea is the greatest nation of men in Pannithor, and possesses arguably the best human navy. Their ships are certainly a sight to behold, painted brilliant white, with sculpted golden prows proclaiming their devotion to the Shining Ones. 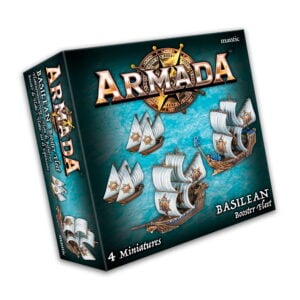 Characterised by massive ships of the line, supported by an array of smaller, more specialised vessels, Basilean fleets are unlike any other human warfleets in both appearance and battle tactics. Like all human warfleets, however, the Basilean Navy depends upon sail for its speed and manoeuvrability.