In the last of our fleet focus blogs, we’re introducing the stoic dwarfs and their powerful ships of steam!

It is only due to lack of numbers that the dwarfs are not renowned as a sea power, for their ships, known as ironclads, are amongst the strongest in the world – wrought with the meticulous precision of the Warsmiths, powered by steam, and bristling with the most accurate cannon on the high seas.

Unusually, dwarf ships are not often commanded by sea-captains, but by Warsmiths who have spent their long lives dedicated to the study of naval engineering. Their officers are also novice Warsmiths, who train as apprentices, learning all there is to know about screw propulsion, steam power, cannon rifling, hull coppering, pressure management, and dozens of other disciplines vital to the efficient running of an ironclad. Maintenance of an ironclad is a full-time occupation, and a Warsmith will suffer not even a single cog out of alignment on his vessel, the entire ship running as a single well-oiled machine.

All dwarf vessels are armour-plated, smoke-belching paddle-steamers, and are treated with reverential pride by the crew. Every handle, wheel and valve is decorated with a Warsmith’s unique sigils; every rivet stamped with a seal of approval. Indeed, as Warsmiths continually seek to improve on designs, and even tinker with their own vessels throughout their service, it is rare for two dwarf ships to be identical.

Not so long ago, the only dwarf fleets worthy of the name belonged to Golloch’s empire, but in recent years the Free Dwarfs in exile have grown bolder, their territories more expansive. Already, their Warsmiths’ ironclads dominate the Low Sea of Carrog, and make forays into the Garric Gulf. But now, thanks to treaties with the Basileans, their vessels ply the Infant Sea at last, a situation that enrages Golloch and brings the dwarfs ever closer to internecine war.

With their thick armour plates and lack of reliance on the wind, dwarf fleets often eschew the simple line of battle tactics that other races are compelled to employ. Instead, dwarf main battle ships are autonomous fighting machines, acting independently and opportunistically in battle.

These enormous vessels are the epitome of dwarf technology, and represent the life’s work of their Warsmith commanders. Their funnel-stacks belch thick smoke into the air as their enormous paddle-wheels propel the ship forward through a churning sea. Floating fortresses of metal, they are as enduring and unassailable as the mountain holds of their creators – indeed, they could be said to be holds in their own right, home to an entire clan of engineers, targeteers and Warsmith apprentices, their families and worldly possessions in tow. Dreadnoughts often go many months without making berth, relying on smaller vessels for their resupply and the relaying of orders from home. They are maintained continuously, repaired at sea by the skill of their crew, and stand ready to be deployed into any theatre of war at a moment’s notice.

In battle, Dreadnoughts plough full steam ahead into the enemy line, cannonballs ringing off their armoured hulls as they turn their many gun turrets to bear on the foe. It is easy to see why the first Dreadnoughts were mistaken for gigantic sea monsters, and the devastation left in their wake only adds to their fearsome reputation.

To the untrained eye, many dwarf vessels are similar in both size and appearance. Many an inexperienced captain has dismissed a GrimmStone as a frigate, only to be overwhelmed upon engaging it. In this way, the GrimmStone-class ironclads operate much like the dwarfs themselves – diminutive in stature, but uncommonly hardy and determined.

By eschewing the larger battle ships of other races, the dwarfs have constructed something truly ingenious in its simplicity. The GrimmStone is the mainstay of the dwarf fleet – it is the most standardised in its construction of all dwarf ships, and newly promoted Warsmiths can, with relative ease, construct and command such a vessel. They are numerous, sturdy and dependable. Despite their low gun count, their rate of fire coupled with increased accuracy from their broadside sponsons makes them the equal to larger ships in gunnery. Though they might be considered more susceptible to boarding actions than larger ships, the dwarfs compensate for this with fully enclosed gundecks protected by rune-sealed hatches. The enemy would underestimate these battle ships at their peril.

While GrimmStones and Dreadnoughts use their armour to get within effective gunnery range, the RuneAxe is a more specialised innovation entirely. Using the basic GrimmStone hull design, the RuneAxe ironclad exchanges firepower for increased crew capacity, and replaces the upper gundeck with enormous grapple-launchers.

Powering through the chaos of battle with their steam engines, RuneAxe ironclads are tasked with entangling enemy ships, their grapples punching through hulls and ensnaring masts, drawing the two vessels inexorably into close engagement. Only then does the RuneAxe deploy its secret weapon: the boarding ramps that could well be mistaken for gunport shields drop down, crunching onto the gunwales of the enemy vessel, and from the armoured compartment within comes a full complement of Ironwatch Marines, the dwarfs’ elite boarding warriors. Sweeping the decks clear with rifle fire before engaging with keen-edged axes, it is a hardy foe indeed who can resist their assault. 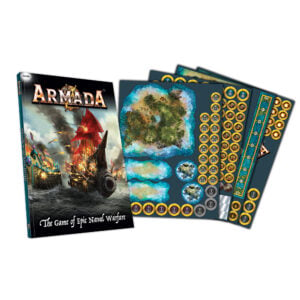 Armada is a tabletop game for two or more players. Choose your side and then command a fleet of Mantic miniatures to represent powerful navies such as the stoic and pious Basileans, or plot carnage and destruction with the rampaging orcs. With a range of beautiful ship models to choose from and many stories to tell, Armada is truly an amazing spectacle to play and witness. The 96-page rulebook contains the core rules, 10 action-packed scenarios and advanced rules for potentially devastating weather effects.