The Battle of Rhyn Durfaris as reported by Ben Stoddard 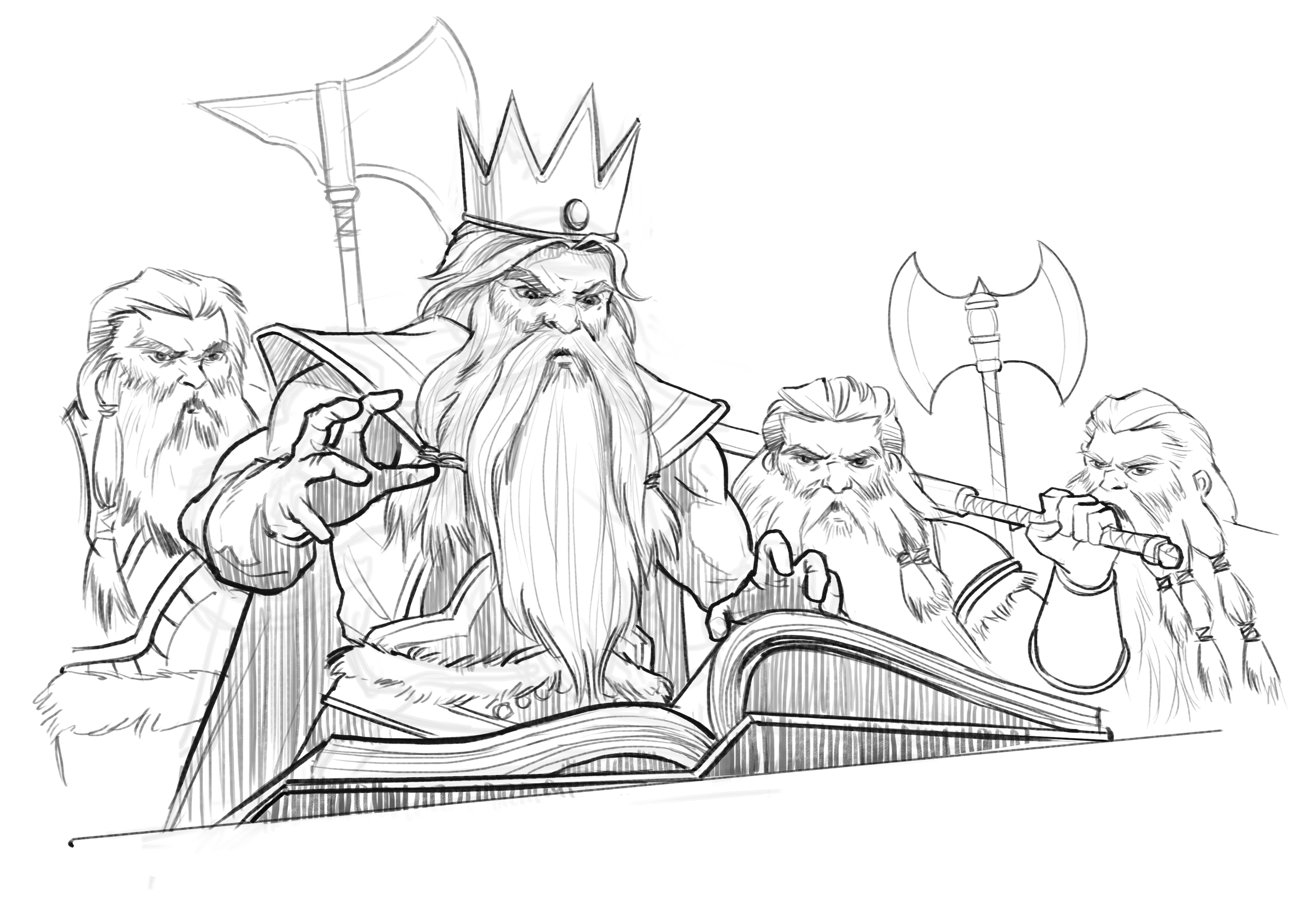 This battle report was between the army of Croathus the Liche King and his legion of the dead against the unknown dwarf commander whose name has not yet been entered into the annals of Dwarven history. This lapse will likely change as it is unlikely the dwarven commander has seen the last of this undead plague.

The scenario was the same as was given in the campaign book (Battle 2: March to War!) so it was a Kill scenario. Each army was 2000 points.

I played regular Undead and my opponent played Dwarves with no special characters.

Setup was better for my Undead as my opponent deployed his whole force across the board and left his brock riders on his far right flank across from my werewolves. 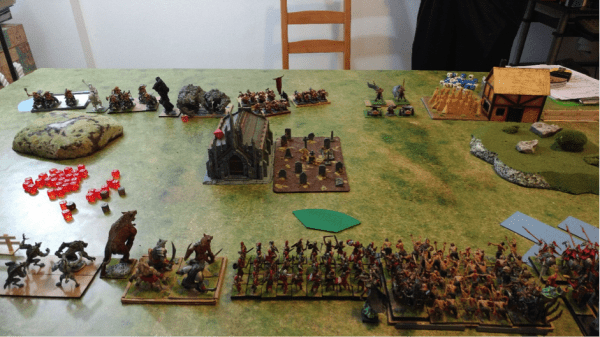 Turn 1 saw the dwarves make a cautious advance, and little else; however, I was able to advance my right flank across towards his artillery with my chaff unit of Mounted Revenants, my regiment of Soul Reaver Cavalry, and my Cursed Pharoah with the Wings of the Honeymaze. I also pulled my werewolves back on the left flank to redeploy with my main force which left his Brock riders out in the cold for 3 whole turns.

The dwarves fired everything they had at my Revenant Cavalry, but couldn’t finish the job. Nothing else really happened beyond that for them, other than his right flank trying to play catch-up with my werewolves. On my turn I charged my revenants into his allied regiment of Elohi that had set themselves up for a flank charge if my Soul Reaver cavalry didn’t do its job.

My mounted vampires pounced on the first artillery piece while my Cursed Pharaoh set himself up as a flank guard against his Ironguard that were threatening from the side. My Revenants on foot charged up the middle and with both my Liche King and a Necromancer blasting them with surge they were able to make contact with the troop of Ironguard in the center, but failed to route them. The Soul Reavers made quick work of the organ gun and then turned to set their eyes on the engineer right in front of them. The Revenant Cavalry only managed to put two wounds on the Elohi and so only managed to ground them for another turn.

The dwarf warsmith took the brave route and charged the soul reavers, the Elohi charged my Revenant Cavalry and my Revenants on foot were flank charged and counter charged by two units of Ironguard. The organ gun took some pot shots at one of my units of Werewolves who was making their way up the center along with the Lycan Alpha, scoring 4 wounds but failing to route or waiver. The Elohi routed the Revenant Cavalry and backed up to try and stay out of range of the Werewolves that had just been shot, which took them right into view with my Cursed Pharaoh. The Engineer failed to make a single hit on my Soul Reavers, and combined between the two Ironguard, they put 12 wounds on my Revenants on foot and failed to route them.

My turn saw the Revenants counter-charge the bigger unit of Ironguard along with my Soul reavers charging the warsmith, and my Pharaoh flying over to hit the Elohi. My Werewolves maneuvered into a better position. The Soul Reavers routed the warsmith and overran into the next Organ gun which they then proceeded to also demolish before turning around to face the Elohi behind them. The Cursed Pharaoh put another 3 wounds on the Elohi but failed to route them, and the revenants on foot also failed to route their target. 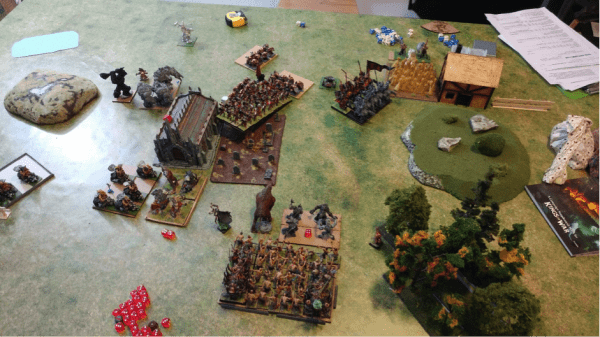 The Brock Riders finally made contact with the unit of werewolves I had moved to cover my flank. They slammed into them, causing 9 wounds and then wavering them. The Elohi counter-charged the Pharaoh but only put a single wound on him and didn’t waiver or route him. The Ironguard once again charged my revenants and whiffed hard, causing them to only cause 4 wounds, and fail to route them. He also shuffled his Earth Elementals around to try and get them into position for the end of the game, but by this time it was too late. On my turn I charged my Soul Reavers into his Elohi along with my Pharaoh and wiped them from the board. My Werewolves were able to get into a flank of one of the units of ironguard and my revenants charged them as well but somehow failed to route them.

The brock riders wiped the one unit of werewolves, but by now the end was nigh. He counter-charged everything I charged but because of the troop of chaff in front of his Earth Elementals he couldn’t get them in to attack my revenants. His two handed Ironguard flanked the revenants but still didn’t do enough damage to route them, rolling a 4 on their route test. On my turn I charged my zombies into his brocks and held them there, doing a grand total of 7 wounds. My Soul Reavers and Pharoah both moved around to try and get a better position, but they were too far out to make it back around and the center was too congested anyways. My werewolves charged the Ironguard in front of them and failed to route them. My revenants stood still so that anyone who tried to charge them would be hindered.

The Brocks charged the zombies but failed to do enough wounds to do anything. The ironguard charged the werewolves but didn’t even land enough to even cause a single wound. The Revenants once again were lucky and stood their ground. On the undead turn the werewolves coutner-charged, but didn’t manage to scratch the hard armour of the ironguard in front of them. The zombies didn’t do nearly enough wounds to route the brocks and the Revenants decided to gamble and charged the troop of ironguard in front of them, routing them and adding their corpses to the body count. That ended the last turn. 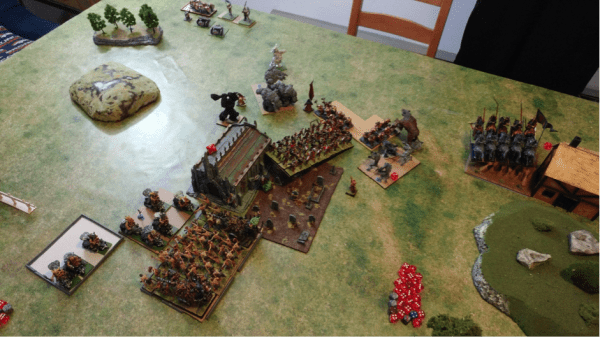 Undead losses: 1 Troop of Revenant Cavalry and 1 Horde of Werewolves with Helm of the Ram for a total of 365 points lost.

Dwarf Losses: 1 Troop of Ironclad, 1 Regiment of Elohi, 2x Organ guns and 1 Warsmith for a grand total of 525 points lost.

Draw by 40pts, with the Dwarfs barely holding off the Undead advance.

Wow! That was a close-fought battle! Whether you are a stalwart Dwarf defender, an Undead invader, or indeed any other race of Mantica, you can take part in the Edge of the Abyss Summer Campaign by playing games of Kings of War and submitting them to hunter.bulkeley@manticgames.com.