Big changes and improvements to DreadBall 2.0

This blog is based on an update we’ve just sent to Kickstarter backers, regarding DreadBall 2.0. Normally we don’t post Kickstarter updates on the blog but we felt this one, which deals with some new and exciting changes to DreadBall 2.0, was worthy of its own blog. As you can read in the blog below, big changes are coming to DreadBall 2.0 and we hope it’ll reinvigorate the DreadBall community once more. Exciting times are ahead sports fans…

We’ve spent a great deal of time playing the game internally at Mantic HQ and based on our playtests, we’ve made some changes to the rules since the initial round of playtesting finished. There are some minor tweaks and some major tweaks but the overall result will ensure a more fun and action-packed game!

We won’t go through all the changes here, but some of the highlights include…

Captains were an important part of DreadBall 2.0 but upon reflection we didn’t feel they were different enough to the existing MVPs. We wanted them to feel like a key part of the team that could help them soar to victory or turn the tide when the opposition is running rampant.

In light of this, Captains will now come with their own special set of Captain Cards. These are mix of Action and Special Cards that will help benefit the team on a wider scale or allow them to pull off some spectacular plays. There will be a mix of generic cards that can be used by any team and some that are team specific. For example, the Veer-myn Captain has card that helps the team to pick up the ball when it scatters, while the Teratons have a card that affects their teleportation ability.

We’re really excited about the addition of the Captain Cards and they really help to make the Captains feel like a unique and integral part of the game. We’ll have a closer look at Captain Cards in a future update with some more specific examples for each team. 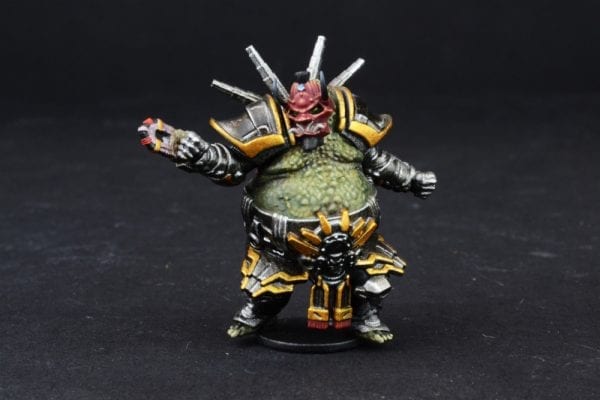 The new Matsudan Captain who will now come with his own unique Captain Cards.

Although DreadBall is all about scoring those impressive Strikes in the dying moments of a Rush, it’s also about entertaining the crowd with the odd Foul here and there! In the previous version of the rules, Fouls were too much of a risk and the benefit was outweighed by the danger of being sent off.

So, Fouls have been overhauled completely for version 2.0. For starters, Fouls now generate a Fan Check for the player, as we felt the crowd would be just as likely to cheer an outrageous Foul, as they would a Strike! Plus, there are also some changes to the Fouls themselves:

Distracting the Ref – this is no longer a foul and the old Ref checks have been changed, so it’s now a three dice check, like many of the other dice rolls in the game. It is an opposed roll made against a ‘Distract’ roll made by the Fouling team, based on the number of players close to the Ref. The more friendly players near the Ref when you commit a foul, the more likely you are to get away with it.

We always wanted Fouls to be an integral part of the game and we feel that these changes will help to encourage more players to take the risk! 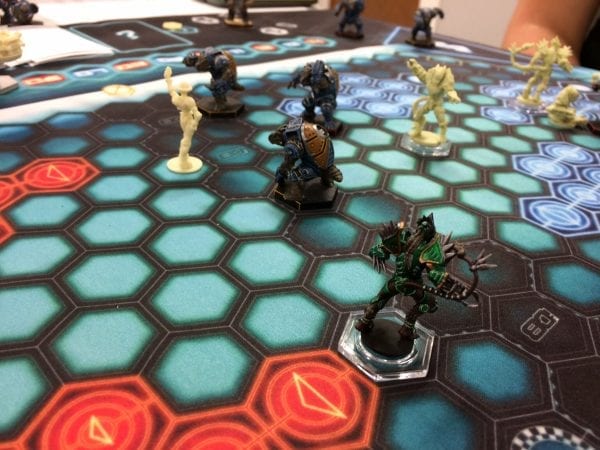 Playtesting at Mantic HQ. The new Yndij team versus Teratons.


The card deck has been overhauled completely. The ‘Special Move’ cards have been renamed ‘Action’ cards but they do the same thing. The Event cards have been replaced with Special cards that are always placed into the player’s hand when drawn, rather than automatically being played. Players are always chosen rather than being picked at random, so the effects of the cards are more powerful, but no effect lasts longer than a single Rush – most are instant. For those Events that couldn’t translate into Specials, we’ve added a few new ones.

We did this because we felt the Events in the old card deck had no impact on the game the majority of the time. The ones that affected a random Player would end up affecting a Player who wasn’t doing anything anyway, or would just make the Coaches use a different Player and not actually change their gameplan. The ones that affected pitch conditions simply stopped Coaches from doing whatever Action was affected – that’s frustrating, not fun. The new cards have more powerful, but shorter term effects, can be played at more crucial times, and most importantly always have an impact.

More playtesting at Mantic HQ. The Veer-Myn versus the Forge Fathers.

Some other minor changes include: