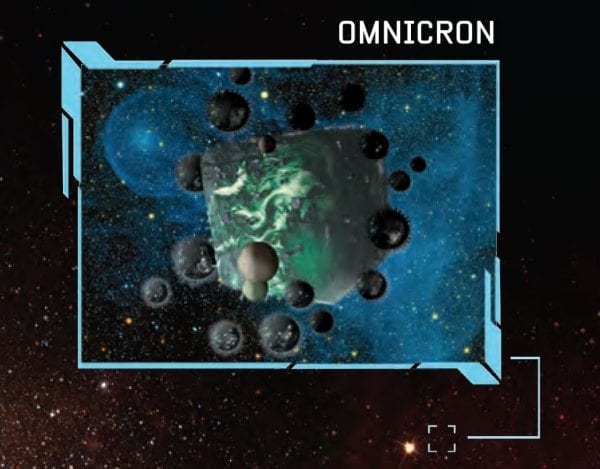 Omicron is a cuboid world of unknown origin. Entirely artificial in nature, it’s surface is covered with fractal landscapes and silicon architecture, whilst its orbit is occupied by sixteen satellite-moons that are constantly broadcast into space. Hundreds of Ada-Lorana occupy the planet’s surface, although they are caretakers, only. The true inhabitants of this world have transcended flesh, uploading their minds into vast computational storage within the artificial world.

With its people disconnected from the material realm and its caretakers able to phase through solid matter, Omicron’s internal structure is odd in that it is devoid of corridors or doorways. The rooms that do exist are not connected in any way, intended as ‘waiting rooms’ for those wishing to join the gestalt consciousness within the world. 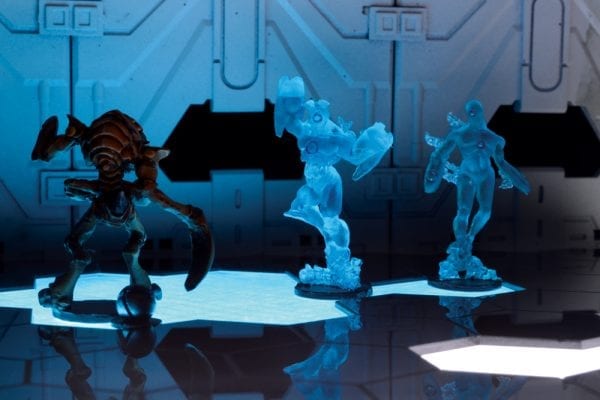 In order to facilitate DreadBall games upon its surface, the DGB commissioned long range teleportation devices to be implanted into the rooms. This allows players to move between the rooms and thus an unique style of DreadBall game was born.

Omicron games are played on two pitches; home and visitors. These are played on a normal DreadBall board with centre line off-limits – treated as the edges of the two rooms. The Strike Zones remain and a ball launch hex has been added to each side. Whilst players can use teleportation to move between sides, the ball cannot be carried through them – each side is effectively its own pitch. In addition, those sneaky Koris can’t create portals between pitches either!

Each venue has its own MVP and Omicron goes one better – with two in one. Meet Gemini – the Dark Twins. 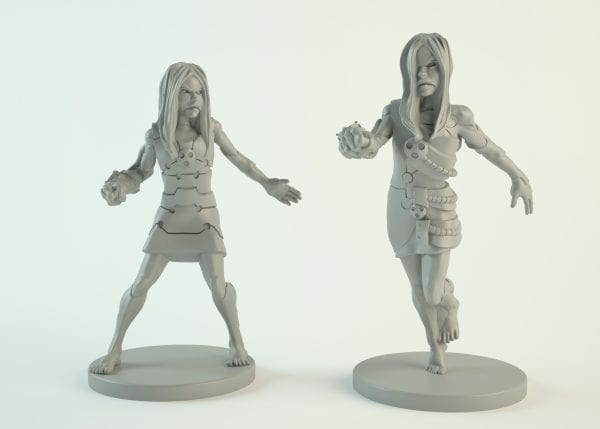 Gemini is a cybernetic consciousness that was birthed during a cataclysmic battle between two rival artificial intelligences in a remote ThaunTen Labs test-vault. It’s birth killed all of the on site staff and wiped its own memory banks. When it awoke, it began a quest for knowledge, its eventual goal the same that it had always been; to conquer.

Realising that it needed a physical proxy, it activated a pair of robotic drones; Harmony and Melody. It moves through the networked systems of the underworld, acquiring more more knowledge with each passing day, whilst the drones use their skills to gather information in a more direct manner – facing the lunatics and murderers on the underground DreadBall Circuit.

The twins can pass actions between each other and work in concert to outwit their opponents. Harmony is a strong Guard, whilst Melody is a swift Striker. They are tough – far tougher than their frames suggest and have the skills to match. These two are available as finely detailed metal miniatures, part of the Hazard System Heroes MVP pack. The pack contains a number of additional MVPs found in the challenge cup, including Kreed, Slalaran Vesh and Eclipse.

DreadBall: The Challenge Cup and Hazard System Heroes are available to pre-order now and will be gin shipping at the end of January!