How to create a character in The Walking Dead: All Out War

As well as playing as well-known Survivors like Rick Grimes and Michonne in The Walking Dead: All Out War, did you know that you can also create your own characters? No… well let’s tell you how!

In the Days Gone Bye expansion, as well as playing through Rick’s fight for survival in the Atlanta Camp, there are also detailed rules for creating custom Survivors. Here we’ll take a look at how to make your own survivor.

Download a blank Survivor card from the Mantic Games website and start filling in the details, like your character’s name and pop in a suitable picture. You can also choose what type of Survivor you want them to be: Marksman, Runner, Support or Tactician. There is no points difference between these types but it will change some of the capabilities of your Survivor. 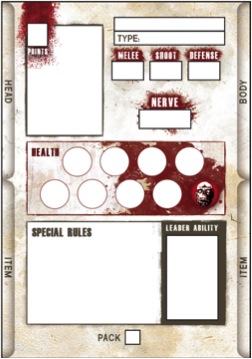 Start assigning how many dice and what colour dice your Survivor will roll for Melee, Shoot and Defense. Depending upon what dice you choose, it’ll start adding to your Survivor’s overall cost. Red dice (which have the lowest potential results) are the cheapest, while blue dice are the most expensive. You must give your Survivor at least one red dice for defense.

For our Survivor, we’re going to concentrate on giving him some real punch when it comes to ranged combat, with one blue dice and one red dice (costing a total of 19 points). While defensively he has a red and white, costing six points. We’re leaving Melee blank in the hope we’ll be able to stay clear of trouble! 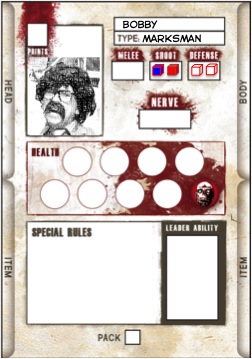 You’ll need to assign your Survivor a nerve rating and some health. The Nerve rating is how easily they’ll panic during the game. Survivors all start at Low but if you want to increase that to Medium or High, it’ll cost five points or 15 points, respectively. We’re going to opt for Medium. 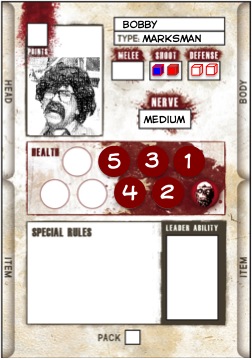 The Walking Dead: All Out War is all about trying to scavenge as many supplies as possible and although you can carry a limited amount of items, you can also use a pack to carry a few extras. All Survivors have one pack slot as standard but if you want more than that, you’ll need to pay.

We’re imagining our Survivor is going to hang back and take out the enemy, so it’s unlikely he’ll be carrying many supplies, so we’re going to save some points and stick to the standard pack slot.

If we were creating a Runner, it’s likely we would have had more, because they would be dashing across the playing area to grab as many supplies as possible. 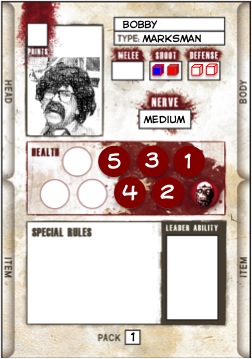 The final step is perhaps one of the most enjoyable because you add any special abilities for your Survivor. This is a great opportunity to imagine how they fit into the world of The Walking Dead. Are they a cold-hearted killer? Are they a seasoned fighter? Has the horror of seeing so many people killed by Walkers sent them over the edge? You can really get under the skin of the Survivor you’re making.

There are a range of special abilities to choose from, like Athletic, which allows them to run 10-inches, rather than eight or Scrapper, which means the model always pushes back their opponent after melee combat. Again, these abilities all have different points values, with the most expensive costing 12 points and the cheapest costing two points.

We’re going to give our Survivor Unstable (at the start of his turn we roll a blue dice to see how many actions he gets) and Distract (when performing a Noise action, this model may choose any point within six-inches from which to create the Noise). These cost a total of seven points, which puts our final tally on 42 points. Now, we just note all that on the card and write the final points tally.

During this final stage, you can also choose whether or not your Survivor will be a leader, which allows you to add one special leader ability. 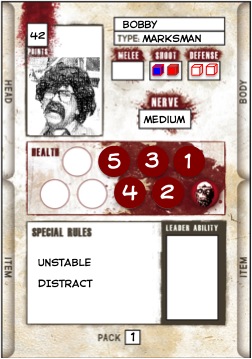 So, there you have it, a step-by-step to how character creation works in The Walking Dead: All Out War. We would love to see any examples of the characters you’ve already made, so please share them on our Facebook page. And make sure you pick up the Days Gone Bye expansion from your local retailer or the Mantic website