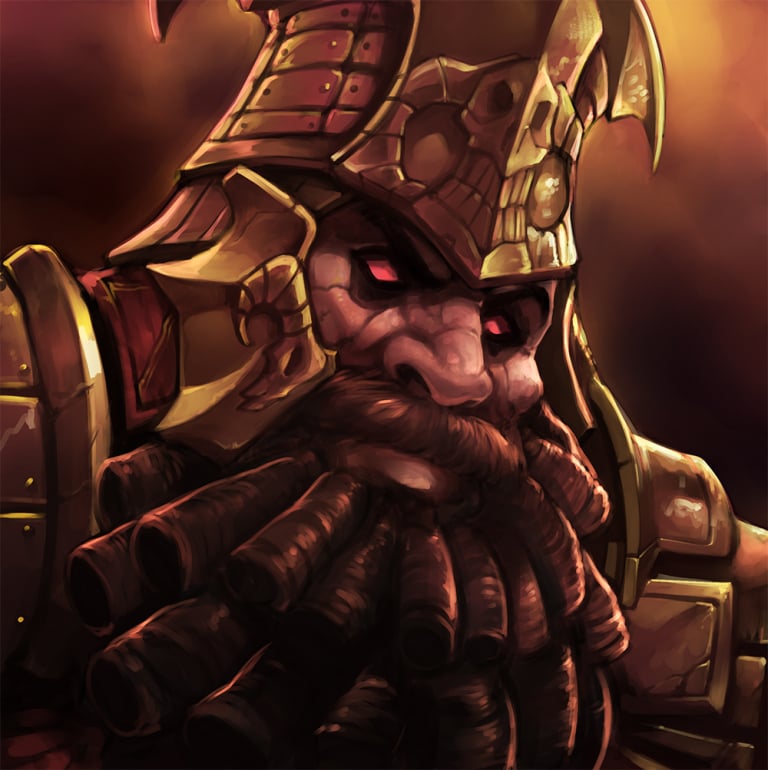 Hi! Dave from the Studio here to ramble on about the process we went through creating new Abyssal Dwarf infantry sprue, plus a general look at the design process of kits in general. The Decimators and Blacksouls were hybrid metal and plastic kits – some of the earliest Mantic has ever produced – and with the Blacksouls out of production for years, they were more than due an update to match the rest of the range.

So, once we’d decided that we were going to do a new hard plastic Blacksouls kits, I set to work writing up briefs. These are used to describe the models and the kit for concept artists and sculptors. They’re usually based on a combination of the background, the rules, and how the kit is going to be produced. I think it’s important so say that this written way back in May 2019 – that’s how early we start planning! With this sort of thing I generally start with a short brief before going into too much detail: 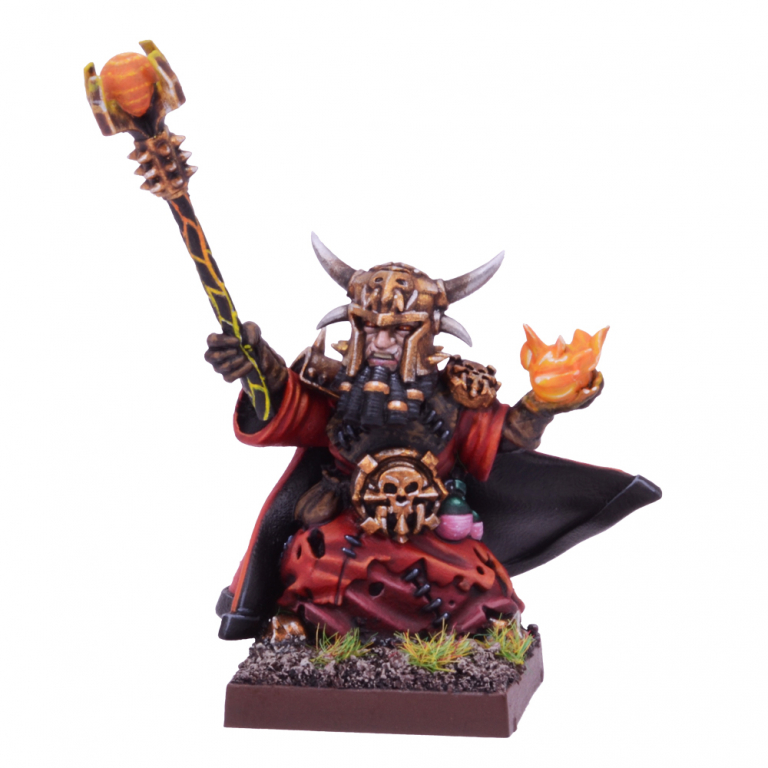 From this brief you can see a quick parts breakdown (before anything had even been sculpted) and a description of what we need and other details. One of the key things with the new range was to update the scale of the core troops a bit. The best way to do this was to use a model with a scale we were happy with – in this case, the metal Abyssal Dwarf Ironcaster. This was to be used as a guide for the size and proportions of the new models. Helpfully, this model was digitally sculpted, so there is a digital copy of it that can be referenced by the sculptor.

From this short brief, we went into more detail about how the kit worked and how the physical models would look.

“These are line infantry for the Abyssal Dwarfs. They must rank up next to each other, so please take this into account with posing. Additionally, most components in this kit must be interchangeable with others.

“These are armoured infantry, wearing a cuirass, pauldrons, and an armoured tasset (loincloth) – this is similar in make up to the existing Immortal Guard miniatures. They wear heavy leather gloves and boots, and have a small amount of cloth hanging down from beneath their armour to cover the back of the legs to the knee. Some may carry small items from their belts, such as bones, skulls, metal runes, daggers, or animal teeth. All of their armour should be ornate, with sculpted demonic faces where there is space, or geometric designs on smaller plates.

“Blacksouls are armed with hand weapons and shields. They regularly carry hammers, axes, and short, curved swords. These weapons should look heavy and cruel –crafted by an evil society. The shields can be variable in design, as each warrior would have acquired their own, rather than being issued with them as a military.

“Decimators are armed with short blunderbusses. These are also made with demonic faces – please use the existing miniatures as reference for the design.

“Abyssal Dwarfs wear tall, ornate helmets which often feature horns and leering demonic faces. Their faces exposed, usually very ugly and always featuring beards. These should be in the same style as the Iron caster’s, with rings and trinkets in each one.”

There was also a full component breakdown for the kit, too, but the details were in the text above. Abyssal Dwarfs don’t have a standing military: they tend to fight in loosely organised groups of individuals. Every single warrior has taken their own path to Tragar and the models needed to reflect this. So, we tried to include as many different forms of armour in the kit as possible, but with all of them having roughly the same equipment as each other. Each dwarf is heavily armoured – but not as heavily armoured as the Immortal Guard. 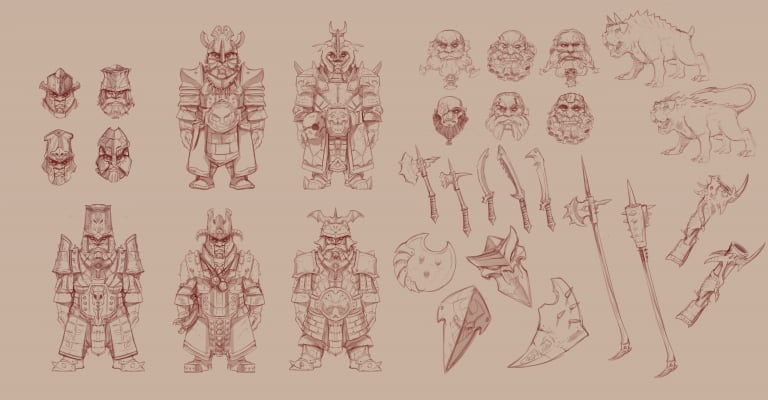 From this, the supremely talented Juan Diego Dianderas created concept art. This was to iron out visually how the new models would look. There was a range of different heads, shields, weapons and armour which we could pick and choose for the sculptor to work from. Juan did a great job of coming up with similar, yet individual designs for armour for each dwarf.

There are a few interesting notes to take from these. Abyssal Dwarfs make more use of swords than their southern brethren, so there are more of those present than any other type of weapons. The shields don’t bear symbols of allegiance, because each one would only belong to the soldier who bore it. There’s some round shield designs because the Free Dwarfs (from which the Abyssal Dwarfs originated) tend to use round shields. We also took this opportunity to redesign the helmets a little. Although they’re still over the top and ostentatious, there’s less height and weight to them so they’re more believable to look at. Those of you who are getting the new sprues will be able to spot the design and pieces that made it into the kit. 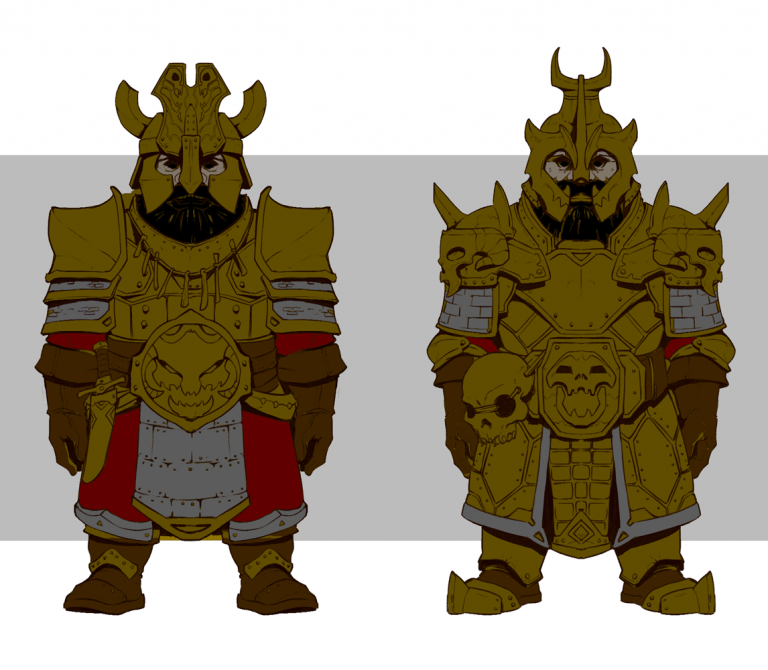 One major change we made was to down armour the designs so that these would work well as line infantry alongside the immortal guard. Also, since they don’t have the blank shields like the Immortal guard, there needs to be an area to add colour that isn’t on the armour. The above diagram was used to demonstrate this point. The warrior on the left has less armour than the warrior on the right.

In tomorrow’s blog, we’ll move from the concept stage to the actual sculpting of the new hard plastics!