The Deadzone Summer Campaign is nearly upon us! To help you get set up, we’re going to focus on each faction you’ll be able to take in the campaign including background, tactics from the rules committee, and more! Today, ready your laser rifle and prepare to be recruited by the GCPS.

The Galactic Co-Prosperity Sphere is sold as an idyllic society where multitudinous civilisations live in peace, prospering from free trade and advanced technology. The truth is more complicated however. The events of the Mandrake Rebellion showed the GCPS’ rulers that aliens cannot be trusted with humanity’s fate. For this reason the various private militaries of the GCPS are almost exclusively human – being simultaneously the first among equals, while also populous enough to be considered expendable by corporate executives. 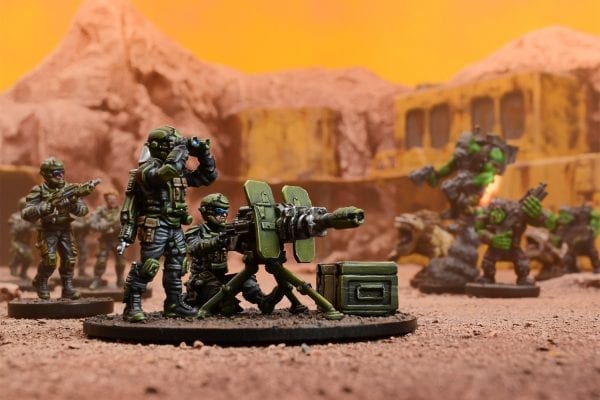 GCPS marine forces are rarely deployed to Deadzones, mostly because no corporation would risk the Council’s ire trying to circumvent a Containment Protocol. In exchange for safeguarding frontier commerce that a Plague incursion, Veer-Myn infestation, or open rebellion would jeopardise, CEOs prefer to let the Enforcer Corps conduct their gruesome work and simply write off any local assets from their ledgers, an exercise in sunk costs versus future investment opportunities elsewhere. Of course, these local assets often include defence garrisons, marine regiments or security details, soldiers with the sheer misfortune of being around when Containment is declared, left for dead.

Cut off by the communications blackout, these forsaken troops are forced to rely on their training, equipment, and cunning to survive in the face of alien invaders, cut-throat mercenaries, and dwindling supplies. Even the Enforcers, often heralded as heroes of humanity, are more likely to execute them than help them – the Council cannot afford to have witnesses to the atrocities of a Deadzone. It is a testament to the courage and resourcefulness of humanity that there are still organised and effective militaries fighting in active Deadzones across the galaxy, although no record will remain of their bravery.

Puny little humans what can they do against aliens? Well outwit you in trade deals, steal all your mineral resources, drain your seas, enslave your population or treat you as third class citizens, oh and beat you hands down militarily but even with all that you’ll still want to join them in the mighty Galactic Co-Prosperity Sphere.

Whilst there is nothing outstanding in this faction at first glance thinking they are mediocre will be your undoing. Cheap troops from the weak recruit who is mainly good for grabbing objectives to the veteran who will save your bacon and his own many times over. 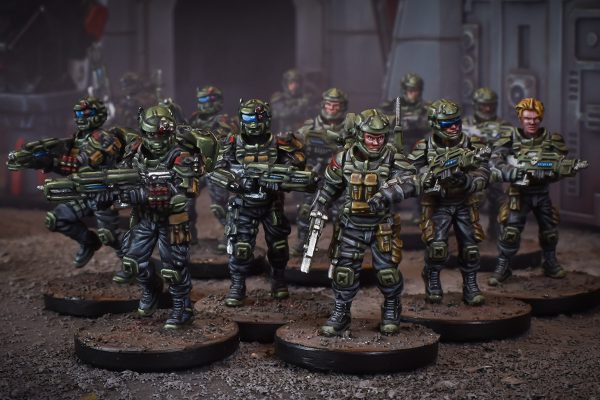 Specialists like the Ranger allow you control of the battlefield and height from the start of the game, though don’t expect them to survive til the end as they will be target no.1! But all the time your opponent is dealing with these models you will be destroying them with your specialist and heavy weapons teams with the widest range of weapons to choose from of any faction. There’s a gun for every occasion in the GCPS. 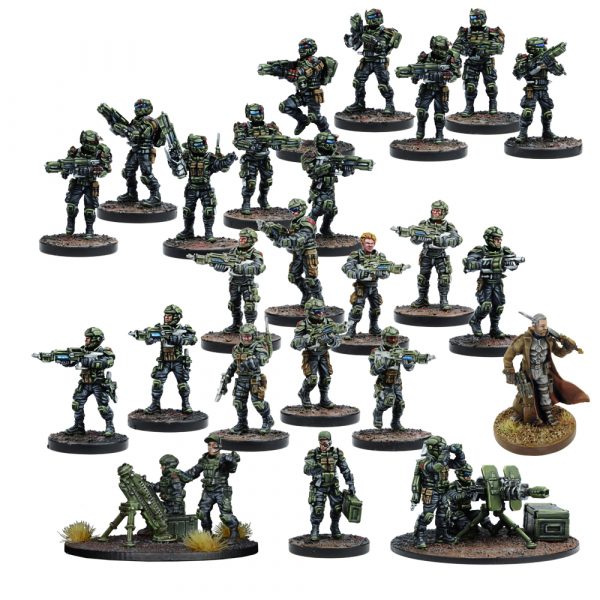 Whether you’re ready to conquer the stars in the name of wealth, or have been abandoned by your corporate overlords, grab your laser rifle and get ready to survive the Deadzone! The GCPS Faction Starter contains no less than 20 GCPS marines – who can also be built as veterans or rangers, with a host of weapon options and comms equipment.s There’s also two heavy weapons squads to suppress  your foes from afar while your troops move up to claim objectives. Your force can be led by either a Major General or a Sergeant. 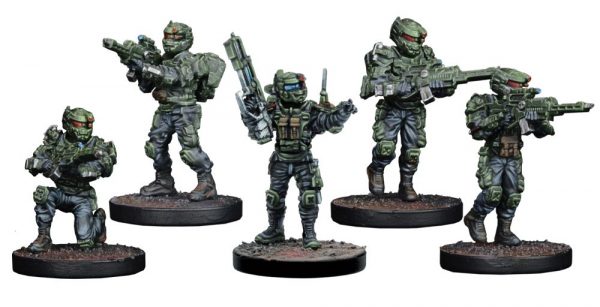 In the claustrophobic ruins of GCPS settlements, the Sniper Rifle is king. Ranger operatives use their anti-grav packs to advance ahead of GCPS strike teams and eliminate any foes who steps out of cover. The Ranger Sniper Team includes four metal sniper rifle to arm your rangers with, plus a thermal rifle and mines – if you’d prefer to go for anti-tank firepower for your troops.

The Deadzone Summer Campaign starts on August 20th. Make sure you have your factions ready and painted in time for Containment Protocol! And remember to pick up a copy of the new supplement, Outbreak, as some missions will include newly introduced scenarios.