Andrew Sharp, Deadzone expert and rules committee member, is back with another handy faction guide for Deadzone. This time he’s turning his attention to the collection of humans and aliens that form the Rebs.

The Rebs are a diverse collections of individuals and disparate races with one goal and one goal only, resistance to the corporations and the GCPS. All have had personal, racial or cultural interactions with the GCPS that have left them feeling used and damaged. Not all are willing to just stand by and let that happen. These brave individuals can be found on the fringes of corporation space and there’s nowhere better to strike back against your oppressors than in a Deadzone.

The Rebs are the embodiment of the phrase “jack of all trades, master of none”, in that they can do pretty much anything any other faction can; shoot, fight and manoeuvre but in all cases they are not as good as the best in other factions. That’s not necessarily a bad thing, but remember it before wondering why you can’t go toe to toe with something from an enemy faction. 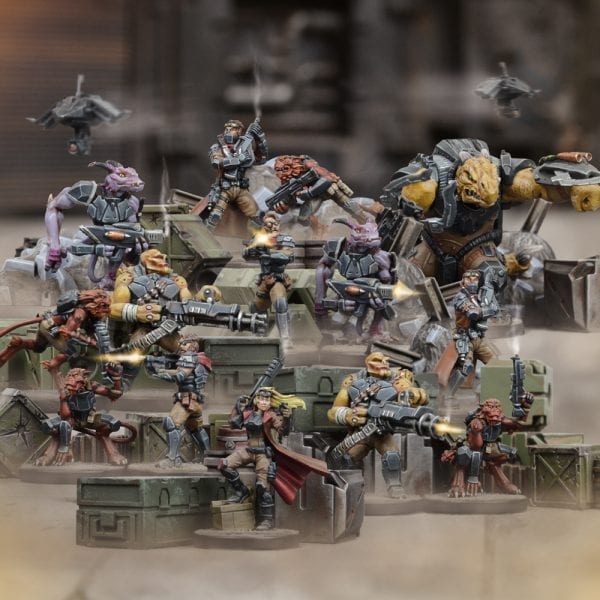 Versatility. Pure and simple the Rebs have an answer for everything. You want a great shooter, you have the leader and Rebs Sniper. Combat specialists? Teratons and Kraaw. Heavy support? Grogans and Sorak. Objective takers? Zee, Drones and troopers. Armour piercing? Sphyr and Weapons Team. The choice is immense. The other main advantage, and not to be overlooked, is that the models are cheap, which means you are likely to outnumber your opponent. This will give you the option to reserve your most powerful models until you know what your opponent is doing.

The main one is that you will never be the best at doing what another faction specialises in. So if you come up against that combat heavy or shoot heavy list, which the terrain or dice favour, you will probably have a bad time of it. Having said that, the Rebs should have an answer for pretty much everything and still bring plenty of models. So you should be able to outmanoeuvre or claim objectives your opponent can’t get to.

Another problem with the Rebs is the wealth of choice. It can be a bit intimidating to pick from such a large line up of great models. But be careful because they are generally not great at sticking around (with the exception of the Teraton) and expect your body count to rise during a game.

Rebel Commander: an excellent stat line with a very powerful 3+ Shoot and tactician (2). The ‘Splat’ is not amazing but can be used well to feed snipers ammo, but beware of a booby trap! The main problem with this model is that you will be tempted to use the shoot stat, which may mean you expose yourself to incoming fire, and with an average Survive and no armour she won’t be staying around long!

Yndij Infiltrator Commander: a good little model, that’s not amazing but is very solid. Scout can be useful as can the ‘Splat’, but beware Fights and Frag etc. Also it only lasts until the end of the round so if you are going to go second in the next round, which is very likely with Rebs, you may find your model exposed when you weren’t expecting it. 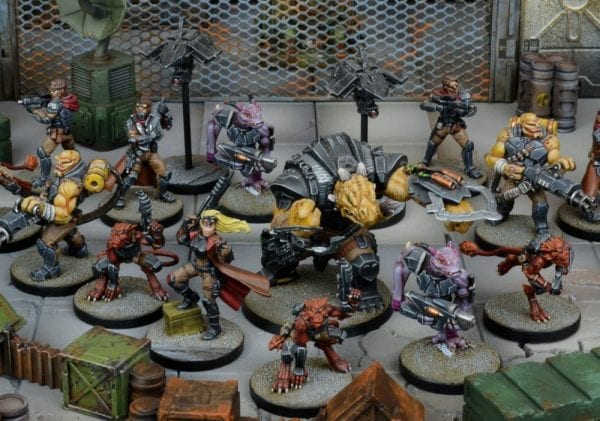 Rebel Trooper: what can I say, cheap and useful. Mr. Average BUT don’t throw them away needlessly. They’re very good at securing objectives, and careful use of Rapid Fire can pin much more important enemy models

Rebel Yndij: Scout and Agile are what you get here. Otherwise a standard shooter and fighter. Very thematic space monkeys though!

Rebel Sorak: now a troop, thanks to the latest FAQ! Comes with a Blast weapon that doesn’t damage models but does pin the cube and moves models around. Potential for wall, and falling, damage. Plus, when used in combination with a combat model to follow up on pinned models, it could be very powerful indeed.

Weapons Team: bigger, stronger and longer than before! Much more durable than with the loader, but the main issue here is you only have one crew served weapon option, which is the missile launcher. Amazing if your opponent brings a Strider, etc., but some value still if you are playing Forge Fathers or Enforcers, especially as being size 3 now allows it to survive better.

Sorak Swordspawn: a new model with a not great fight stat (6+) but frenzy (2). Very useful to follow up a blast from the Rebel Sorak.

Teraton Shock Trooper: a new model for the faction who fills the size 2 combat slot for the Rebs. Teleport allows rapid movement and is both good in combat and shooting. Nowhere near as durable as his big sister though. Use to threaten with movement range and pick off enemy size 1 models by teleporting into them to gain +1 dice for moving in and +1 dice for larger. Combined with frenzy (1) and this should see off most size 1 models.

Kraaw Warrior: a very strong combat specialist who can move quickly if the terrain allows, due to Glide and Scout. Upgrading with Combat Blades makes him even better.

Zee Scavenger: can’t shoot, can’t fight and can barely survive! So why take them? They are very small and can easily hide on a map and give out no VPs if killed. They will win the Scour mission for you almost without effort (especially if using Rebel Commander ‘splats’) and can claim objectives.

Survey Drone: fast and cheap, also no VPs. Very good at taking objectives, ignore them and you’ll regret it. 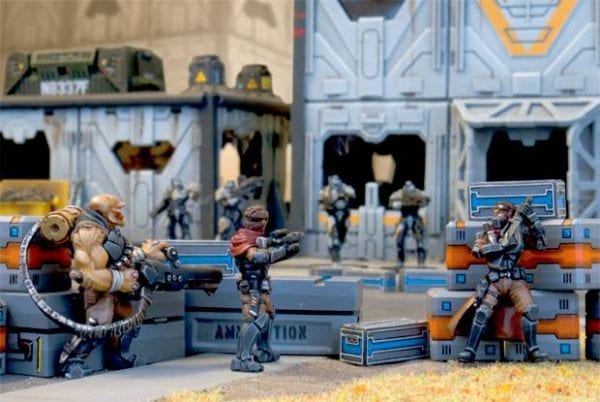 Judwan Medic: has struggled to find a role for many Rebs players. Although they could be useful to heal your bigger models, such as Teratons and the new weapon teams. Quite cheap now too.

Rebel Grogan: a good solid model, filling the mobile heavy support role. A good survive stat but they will still die easily if exposed. The Onslaught Cannon is a good weapon because it’s cheap and the only access the Rebs have to Suppression. Honestly, the Desolator is not worth taking though, it’s cheaper to take a Sphyr who has a better shoot stat.

Rebel Teraton: very Tough and durable. Strong fighters – though not as good as some factions. Teleport is an incredibly useful ability still, despite the FAQ changes, and will see you controlling the board position of your opponent without even doing anything. She has a rubbish shoot stat but has weapons that rely on it much less as they are both area effect. A great tactic is to frag to pin a cube and then move in, although this is harder to do now that teleport is a long action.

Sphyr Lancer: a great little model and a very good shot. Brilliant at taking down heavily armoured models but can still struggle unless you get lots of ammo or 8s. Becomes very expensive if you load out with a Holo-Sight at 26pts. Be careful though because it becomes a target for your enemy from the get go, so don’t be surprised if it doesn’t survive the game.

Rin Nomad: a very versatile model that probably deserves to see more play than it gets. Great shoot stat, but short range and good in combat (for Rebs anyway). One of the few models to have armour as well! Useful to keep hidden until the enemy closes in, then to shoot and follow up to fight weaker enemy models.

Rebel Sniper: amazing! There is nothing more to say. An incredibly good unit with 2 extra dice for the sniper rifle and a shoot of 4+. The rifle is not heavy so you can move and shoot or shoot and duck back into cover. The only downside is the lack of AP, which can be a factor more often than you think, depending on who you are playing against. Again likely to be at the top of your opponent’s kill list. 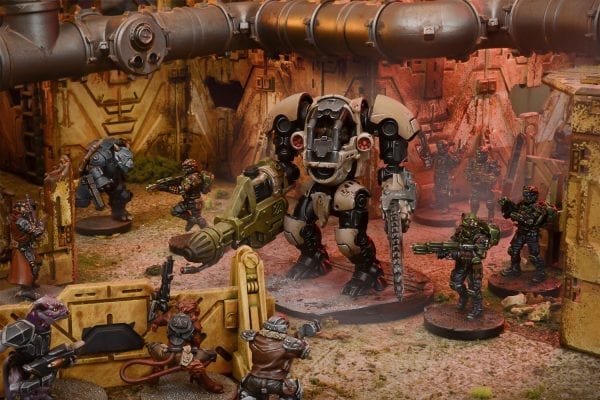 Strider: tough and steady. They will stick around better with the Heavy Burst Laser option, which negates the average shoot stat to a degree. Best roll is probably still to walk forward and draw fire away from your more fragile models and maybe sit on an objective to score round after round.

The Rebs are one of the most adaptable factions available in Deadzone, with a build option for pretty much any scenario and access to some unique abilities that no other faction has, like Teleport and Scavenge.

With such a wealth of choice I would say now is the time to try something different. Change up your own meta. Sure Reb Snipers and Teratons are a great list, but sometimes you need something else too and in the Rebs you have those options.

Want to defend the galaxy against the creeping threat of the GCPS? Well, grab yourself a Rebs Faction Starter or Rebs Faction Booster now!