“… good to see you again folks. It’s time for another edition of the DreadBall Locker Room. I’m your host Elmer and I’m joined by my enthusiastic colleague Dobbs.”

“ENTHUSIASTIC? ENTHUSIASTIC? That’s an understatement Elmer. I’m practically bouncing off the walls today after drinking 20 mega litres of Dreadmax Energy Drink. I think I can see into the future.”

“In that case you’ll know that today’s DreadBall Locker Room is all about Action and Special Cards.”

“No Elmer, I can see further than that. I can see the Greenmoon Smackers clutching the DGB All-time Inter-planetary Mega Cup… and I’m their Captain!”

“I think you may have been drinking one of those bad batches of DreadMax infected with Veer-myn musk. Let’s get on with the show folks before Dobbs crashes from the musk rush.”

“The crowd are cheering my na-” *sound of loud snoring, then someone falling off a chair*

Using DreadBall Cards is one of the key tactical elements of DreadBall. They can help you pull off exceptional combos, vex your opposition and give a player an all-important extra action to push themselves further than ever before. But how do DreadBall cards work and how can you use them in the game? The DreadBall Locker Room is here to answer all your questions.

The standard DreadBall Card deck consists of 31 Action Cards and 23 Special Cards – the blue-headed cards are Action Cards and the orange-headed cards are Special Cards. These are shuffled together before the start of a game and placed in the DreadBall Cards space on the board. Some teams will actually start with a DreadBall Card as part of their roster, or a card can be bought during the course of a match by spending an action. You’ll often see a lot of DreadBall coaches buying a card at the start of their rush, as it can seriously affect what happens that turn.

Let’s start by looking at Special Cards (the ones with the orange header). One of the big changes for DreadBall Second Edition is that Special Cards are no longer automatically triggered when you pull them from the deck. Instead they’re immediately placed into your hand and can be used whenever you want.

Special Cards are used to triggered different events and can be played at any time during either Coach’s rush. This means you can sometimes affect what’s happening to your opponent. Let’s take a look at two examples. 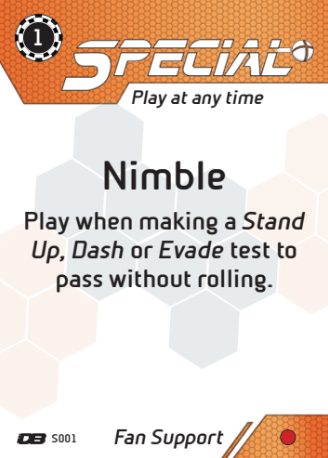 Firstly the Nimble card. This is a card that can be played in your own Rush and allows a player to make a Stand Up, Dash or Evade test without needing to roll. This can be extremely useful for some of those slower teams when they need to push themselves to move that little bit further. Once played, it’s immediately discarded. 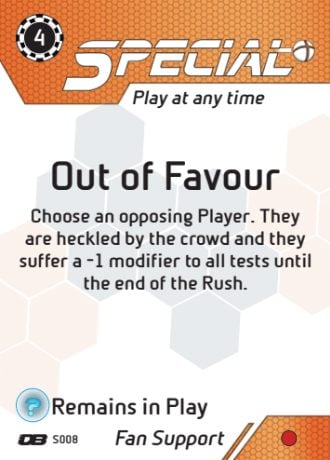 Let’s compare this to the Out of Favour card. This can be played during your own rush or an opposing Coach’s rush. Unlike the Nimble card, Out of Favour remains in play throughout a rush. Once played an opposing player will suffer -1 to all tests! Very handy if you’re planning some particularly nasty Slams, or you want to make a Strike attempt more difficult. The only way to clear the effect is to wait until the end of the Rush or play another Special Card that remains in play.

While Special Cards are used to trigger events, Action Cards are the tactical ace up your sleeve. These can be played instead of an action token and do not count as one of your five actions to use during a rush. What’s more, they don’t count towards the two action limit for a player, so you can potentially give three actions to a player.

Action Cards are vital when you need that an extra move to pull off a stunning slam or vital strike. The latter is particularly useful because you can get a Striker or Jack into position ready for a Strike with your normal two actions. Once you’ve done that, an Action Card is used as a separate action to actually throw the ball. The benefit of doing this is that you won’t lose a dice for moving before throwing.

Something totally new for DreadBall Second Edition is the fact you can now discard a Special or Action Card to re-roll a single dice of your choice following a dice test. This means that if you fluff a Strike attempt or want to make sure you stick the boot in with a Slam, you’ve got the option of discarding a card to get a re-roll. Of course, you might still fluff the roll, but at least you’ve got a second chance. The reason for introducing this mechanic is that sometimes you’ll end up with a card that can’t be used by your team (e.g. a Guard card when playing as the Striker-only Judwan team). However, thanks to Turning the Tide all cards are now relevant.