“It’s that time again folks, we’re opening up the DreadBall Locker Room to give you the lowdown on the galaxy’s greatest sport. Today, we’re looking at throwing and catching the ball.”

“Did you know Elmer that the ball travels at speeds of up to… 200mph… and it’s made of… erm… titanium… and it’s got to be caught using some electricmagnetic funneling stuff?”

“Dobbs are you just reading that from the DreadBall Holowiki page?”

“I just wanted to be the clever one for once.”

“Let’s stick to what we do best, Dobbs. Anyway folks, it’s on with the show.

“Oooh, here’s the entry for how they make Slushydogs. They contain WHAT…?”

Today’s DreadBall Locker Room is looking at how players throw and catch the ball. Both of these actions can only be performed by Strikers or Jacks. This is because they’re the ones wearing the special DreadBall glove. Throwing the ball can be used to either pass to a teammate or score a Strike.

Players can throw up to nine hexes and can target a teammate for a pass, a Strike Hex for a goal or even an opponent (which we’ll cover when we talk about Fouls). In order to complete the throw a player must take a three dice skill test (Strikes gain a bonus die so will roll up to four dice). The longer the distance, the more difficult the throw will be. So a throw of up to three hexes has no dice modifiers, a distance of 4-6 hexes has a -1 modifier and a distance of 7-9 hexes has a -2 modifier. However, there’s nothing more glorious than a spectacular nine hex pass and it’ll send the crowd wild (if you manage to pull it off). There’s also a -1 modifier if you’ve moved before throwing the ball.

Hopefully you’ll launch the ball successfully and, if you’re aiming at a teammate, the number of successes you’ve rolled will be the number of dice they have to catch the ball. Strikers always get a +1 to catch the ball, so even if you fumble the throw they’ll still get one dice to attempt the catch. If you fail to make the catch, the ball scatters and the turn (Rush) will end immediately.

One of the great things about playing the passing game is that if you double the number of successes required when catching the ball, your player receives a free action. This means they can immediately make a free Run or Throw action (and it doesn’t count towards the maximum two actions that can be played on a player per Rush). Doubling rolls is a fantastic way to potentially chain combos of moves together and you can quickly move the ball from one end of the pitch to the other.

What’s more, doubling your catch is a good way to get into position for a Strike attempt. You see, just like throwing the ball for a catch, if you’ve moved before making the goal attempt, you’ll suffer a -1 modifier. So, if you’re able to make it into the Strike Zone with your free action, you can then spend another action to actually throw the ball and you won’t suffer the penalty. 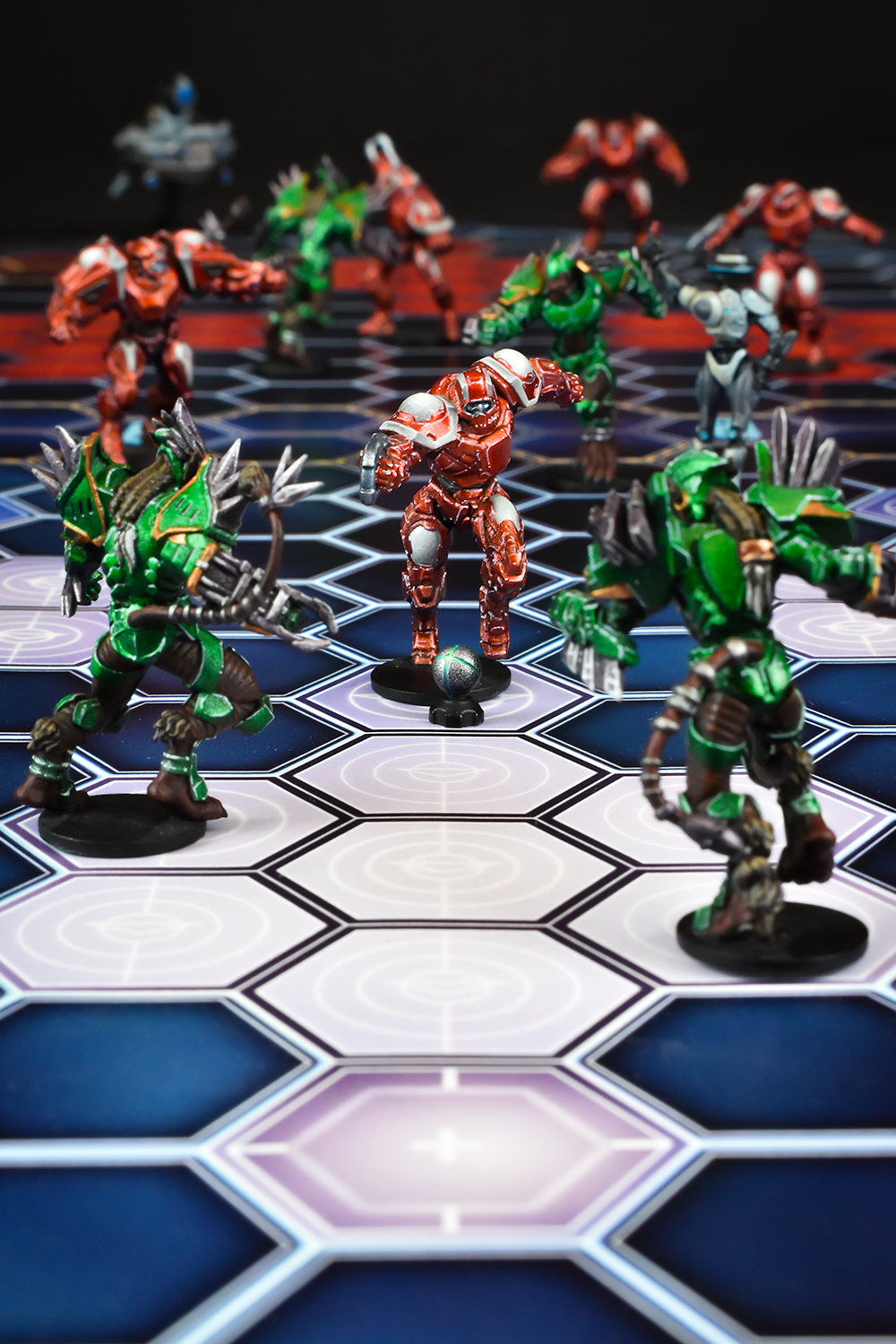 Failing to catch the ball is one of the few ways that your Rush can end prematurely. As such, it’s worth waiting until your Rush is almost over to make the potentially risky throws and catches.

Use the rest of your Rush to get players into position ready to receive the throw. Remember, players can only catch balls that are thrown in their front hex, so position them carefully to ensure they can see the incoming pass.

Although it’s riskier, you can also position players in a way that assumes they will double the catch and get a free action. Obviously this isn’t guaranteed but it does give you the option to spend the rest of your actions on Slamming the opponent or buying a DreadBall card, for example. “Always play for the double,” is a catchphrase often heard during games at Mantic HQ.

Well, that’s it for today’s look at throwing and catching. We’ll be back soon for another exciting edition of the DreadBall Locker Room.

Hope you enjoyed today’s edition of the DreadBall Locker Room. We’ll be back shortly with a closer look at Slamming. Remember, DreadBall Second Edition is available to pre-order now and if you pre-order from the Mantic website, you’ll get a FREE limited edition Blaine MVP.