By now you should be aching with excitement for the release of Firefight! But what faction will you take command of in the vast Galactic Co-Prosperity Sphere? Today we’re finding out more about the Marauders.

Since their earliest encounters with Orcs, humans have consistently underestimated their kind. Brutish and bestial in appearance, with tough hide, sloping brows and oversized teeth, it is tempting to dismiss them as simple barbarian savages. In actual fact, Orcs are possessed of a cunning intelligence, able to learn new skills quickly and adapt their tactics dependent on the foe they faced. The first Corporate encounter with them on one of their many homeworlds ended in massacre. Ever pragmatic, the Council elected to make use of these creatures for its own ends, offering them the opportunity to work for the GCPS as mercenaries. The Orcs, for their part, were happy enough to fight anyone at all if there was a reward in it for them, and thus the Marauders came to be. 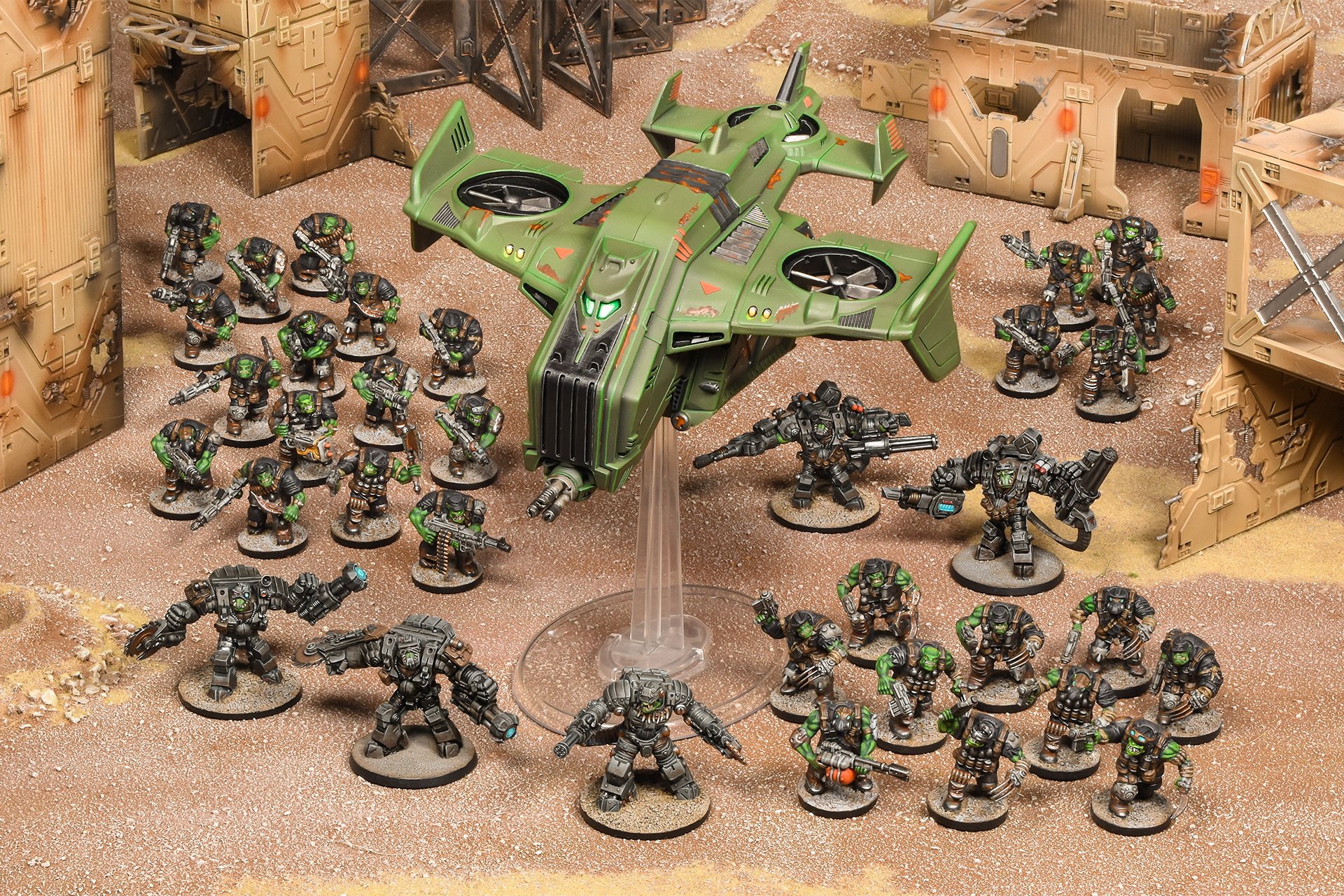 Since the cataclysmic event known as the Mandrake Rebellion, Marauders have been replaced in the employ of the Council by the Enforcers. The Mandrake wars caused the Marauders to scatter to distant corners of the galaxy, gathering in small bands to operate as mercenary rogues, a tradition they continue to this day.

Whether the Marauders encountered in the present day are the same ones who fought for the Council in days gone by, or their descendants, or simply Orcs trained as mercenaries, nobody knows for sure. As ever, they are happy to fight for everyone, from aliens to less ethical corporations and occasionally just themselves. Some of them will be in a Deadzone for the loot, some on commission from a Corp looking to steal a march on its rivals, and some just for the heck of it. Whatever their reasoning, underestimating them is generally the first and last mistake that any enemy is given the opportunity to make. 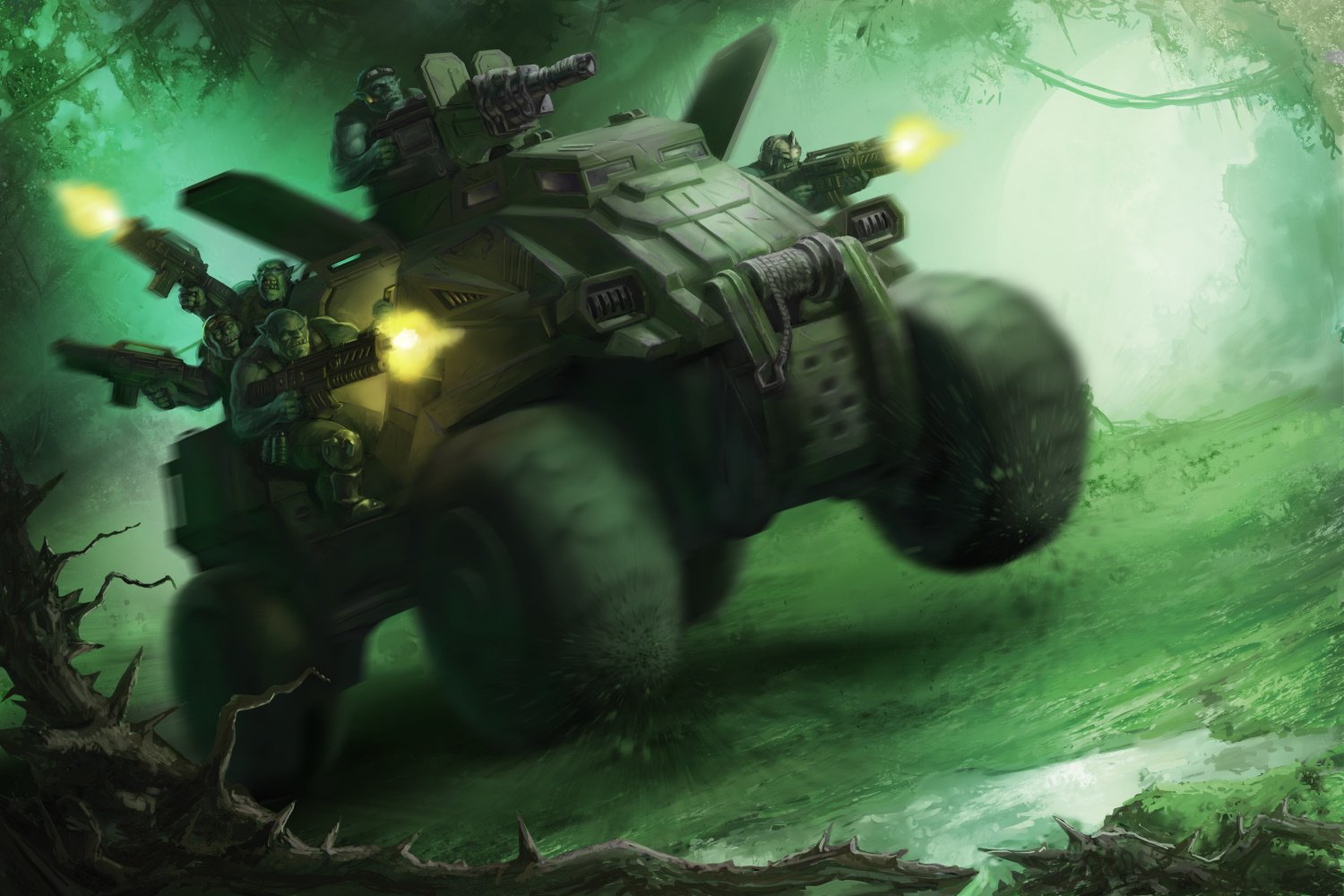 Unruly, savage, mindless? Not THESE orcs. Chris Cowburn is here to explain why.

Marauders are incredibly suited to warfare in the Warpath universe, being able to sense the ebb and flow of a theatre of war and react accordingly. Their warfaring capabilities caught the attention of the various corporations, who hired battalions of Marauders to conduct their various operations. Until the Mandrake Rebellion that is…

So, what are the Marauders like? They are incredibly versatile. The fantastic new plastic sprue can make either Commandos or Brawlers. 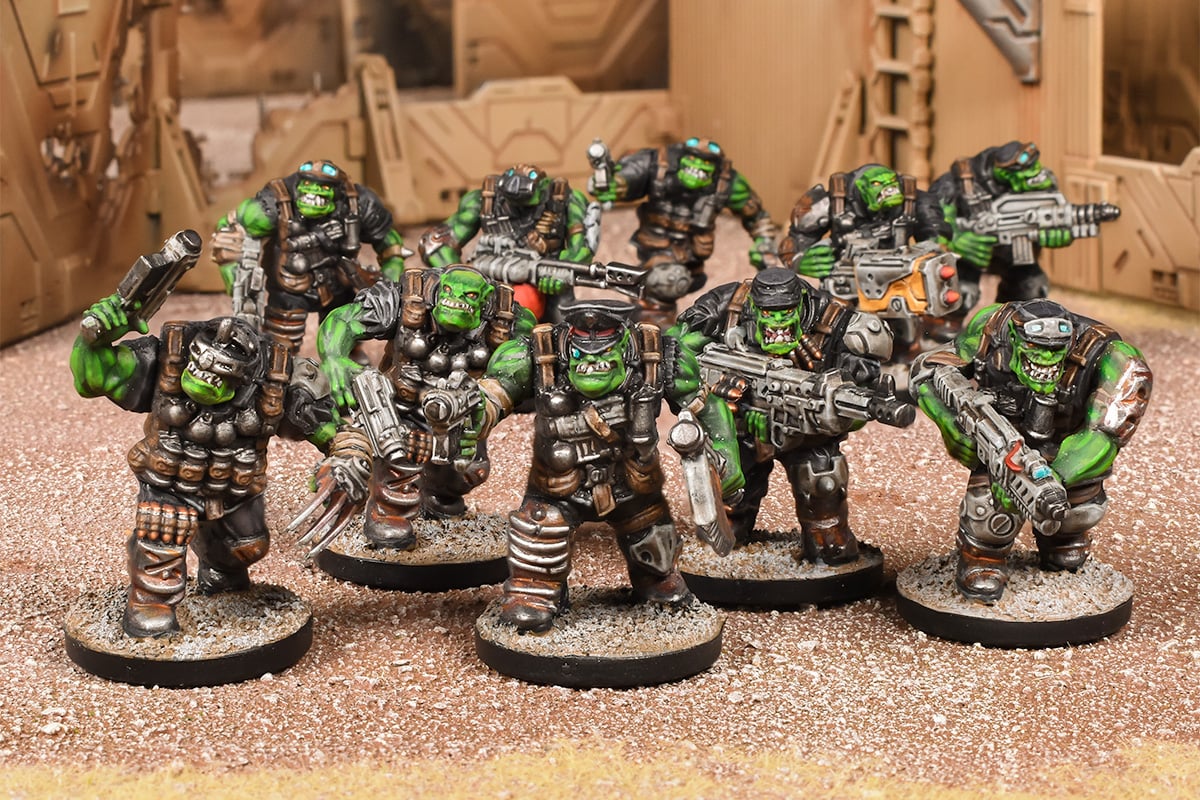 Commandos will lay unleash a flurry of bullets at the enemy, causing them to keep their heads down. And they can utilise the ‘Every Penny Counts’ faction order to blaze away twice in a turn, which dramatically reduces the combat effectiveness of your opponent.

While the Commandos are giving covering fire, the Brawlers will be edging forwards, getting ready to charge and destroy the opponent up close. And with the ‘No Questions Asked’ faction order, not many units will stand up to a charge from them.

So, it’s clear that orders will play a big part in Marauder lists, but unlike Enforcers, most Marauders have not been through rigorous training programmes, and need a Commander to tell them what to do.

A Commando Captain provides an Orange power die, and can be accompanied by 2 Goblin Snipers. A perfect choice for sitting at the back, supporting the Commandos while also being a threat thanks to the Sniper rule. 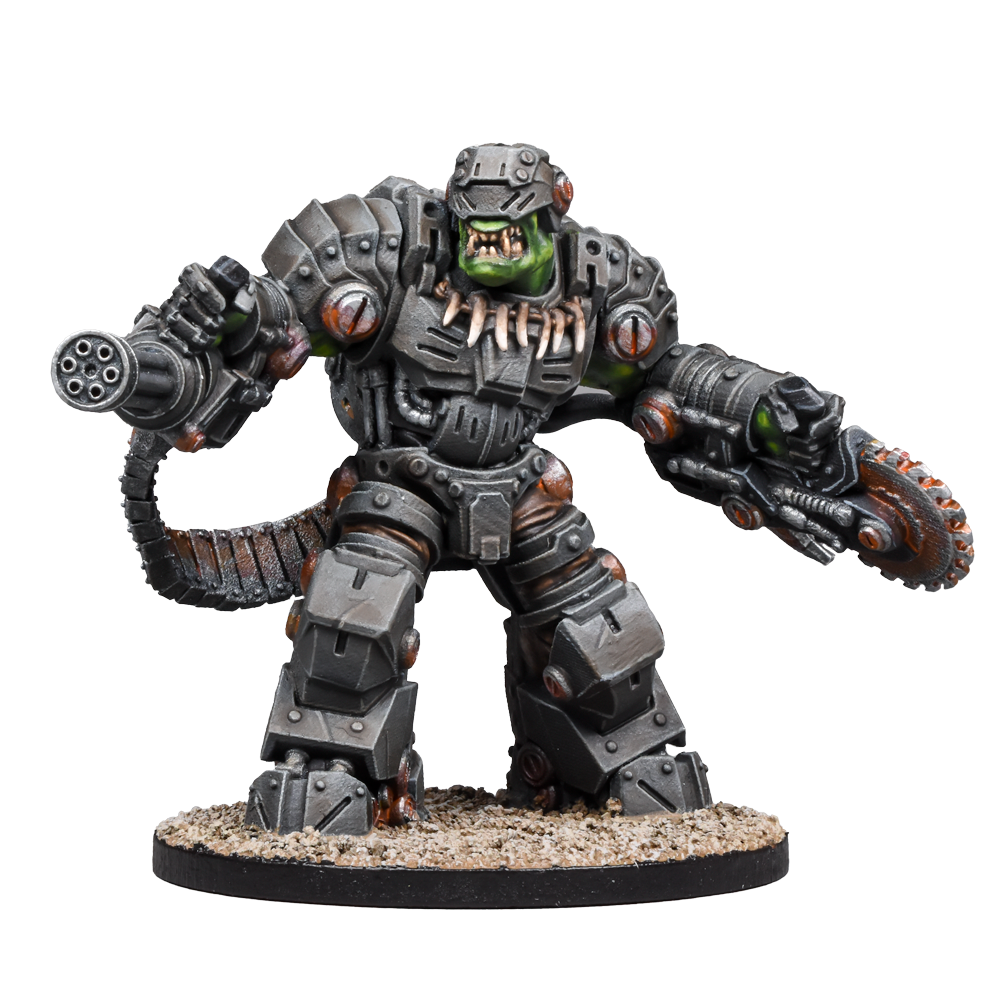 The brand new resin Ripper Warlord is a fantastic piece, and is quite a threat on the battlefield. Not only does it provide 2 black dice, it also boasts a rotary cannon, and in combat has 3 attacks at AP3, which should make mincemeat of almost anything it assaults. And it can take a retinue of either Ripper Maulers or Ripper Rainmakers, meaning you can decide how much danger you intend to put them in from the very start.

I best talk about the Goblin Heavy Weapon teams, otherwise Rob will add something in saying how awesome they are. And for once, he wouldn’t be wrong! Their stock weapon is the Missile Launcher, with each weapon having two shots as standard, that each turn to Blast D4 if they hit. That means this unit has the potential to inflict 16 AP2 hits! 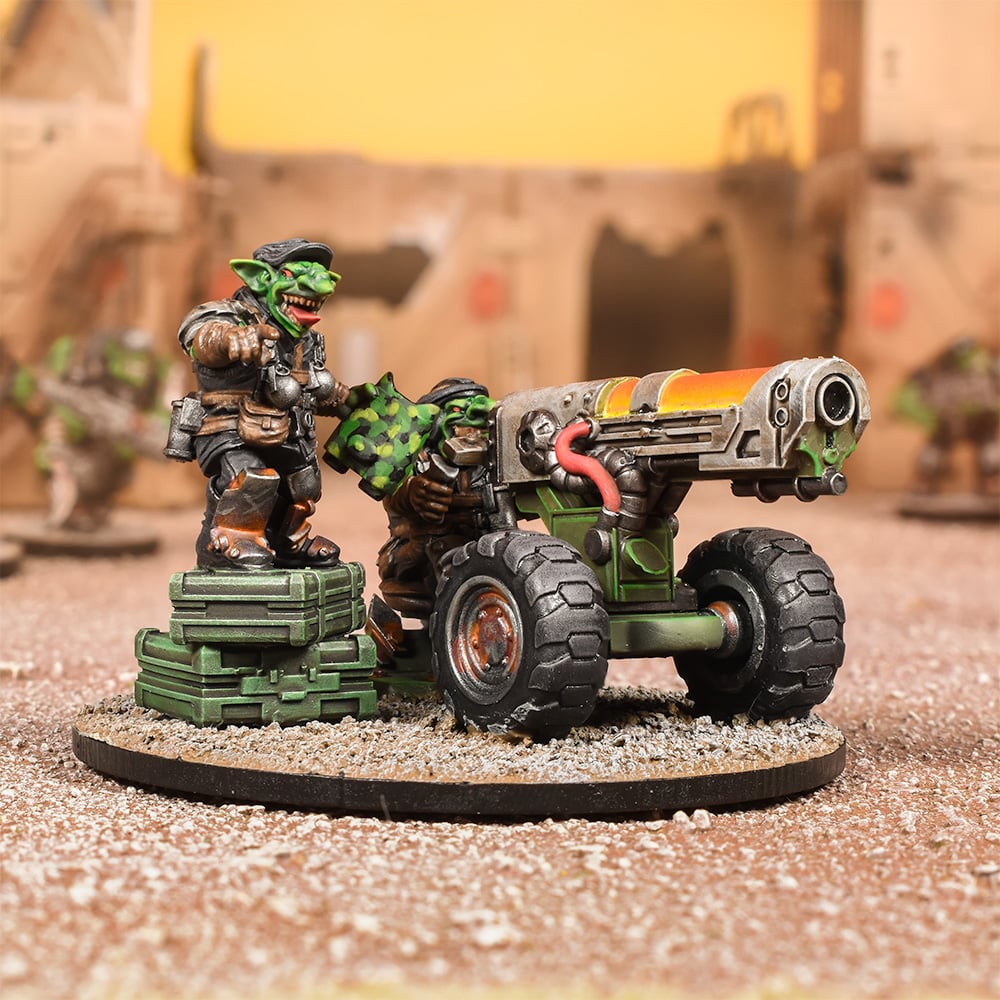 Hulks are also present in Marauder armies. Anyone who has played Deadzone knows how much of a threat these brutes are, with their Hew cannons capable of taking out anything with a decent salvo. But in Firefight, they can be taken in units of two! They will give you a lot of board control, and will need neutralising, which is easier said than done.

So there you go, the Marauders will be a popular army in Firefight, with a nice mix of shooting and assault units. And the fact they have a lot of new beautiful models coming will increase their appeal.

A mix of species from the same sector of space, the Marauders are a motley crew of hardened fighters that, when organised well, are more than a match for most opponents, both in terms of muscle and also tactical know-how. This set is a great way to start your Marauder army, or expand an existing force to challenge your opponents and take your rightful place in the galaxy!

Although they’re not capable of true flight, the speed and manoeuvrability afforded by their jump packs make the Skyscrapers valued assault troops for Marauder generals. Few forces are prepared for the sudden impact and close range fire of a jet-propelled commando.

The scrawny goblins that accompany Marauder fighting parties aren’t suited to close quarters combat. If possible, goblins prefer to fight at range, putting their efforts into crewing procured artillery pieces. Whether bought, stolen, or scavenged, these temperamental weapons are still very effective on the battlefield.