In the second part of his series, Nick Williams adds a Gore Rider Wing to his orc army.

My experience with this type of army tells me that it’s not just the big Stampede Hordes that are tricky, but it’s the numerous fast units also buzzing about. Before you can even deal with the Stampedes, you have to take care of the fast units. Gore Riders are perfect for this. They’re respectable heavy cavalry and while they’ve got fairly low Nerve at 13/15, they do get Crushing Strength(1) so still fight effectively in drawn out combats. They are also cheaper than other heavy cavalry units! 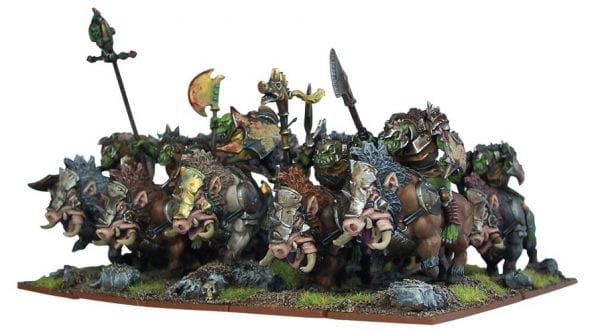 I’d like to fit as many of these in as possible, but three regiments of them feels like a good starting point. Like the Fightwagon Hordes, Gore Riders work best when double charging enemy units. With three regiments, I can lose one or have one charge blocked and still have a very effective force.

In terms of support, this Battlegroup requires an Inspiring source, so another Mounted Flagger will be taken for this group. If I have the points to spare at the end I’d like to take a War Drum for this group as well. While it will start to struggle to keep up with Speed 8 units moving full throttle, it should be able to catch up shortly after the group engages the enemy. Nerve 15/17 Gore Riders will take a lot to shift indeed (note to self: add the option to mount the War Drum on a faster unit in 3rd edition)!

While not strictly part of this battlegroup, I do want to add an Individual geared up for melee. I feel this is essential for all armies so that they can effectively take out War Engines or disorder enemy spellcasters. A Mounted Krudger it is! While the Krudger could provide Inspiring cover for this Battlegroup, if he’s off hunting war engines or spellcasters then I expect he’ll be outside of Inspiring very quickly so the Flagger is still necessary.