Hellboy: The Board Game: What’s an Agent Card?

It’s Hellboy Week on the Mantic Blog. Over the next few days we’ll be delving into key gameplay elements ahead of the Kickstarter launching on April 25th. We kicked off the blogs last week with an overview of the early development stages. If you missed those, make sure you read part one and part two.

For today’s rules focus, we’re looking at an Agent Card. In Hellboy: The Board Game you and up to three others (although you can play solo too, don’t worry) will choose your BPRD agent and then head out into the field. In the core game you’ll find four agents to choose from: Hellboy, Liz Sherman, Abe Sapien and Johann Kraus. Each agent has their own unique card with their own special abilities.

For now we’ll look at Hellboy’s Agent Card and explain all the various parts. In some cases we’ll give a brief overview as we’ll be expanding on them later in the week. This is just to whet your appetites. A rule aperifit, if you will. 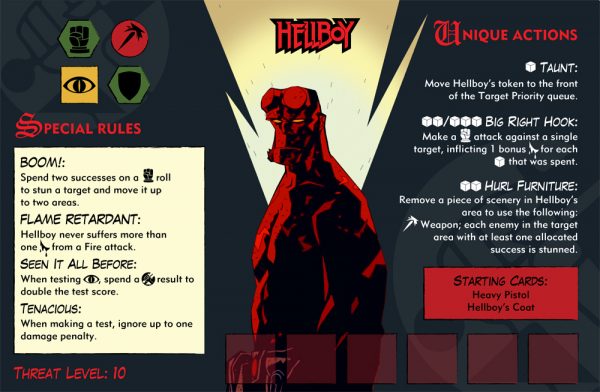 Above you can see a work in progress Agent Card for Hellboy. Please bear in mind that the graphics/text are still subject to approval but this will roughly be what you see in the finished product.

The different colours represent the colour of dice you’ll be rolling when making that test. We’ll be covering this in further detail later in the week. 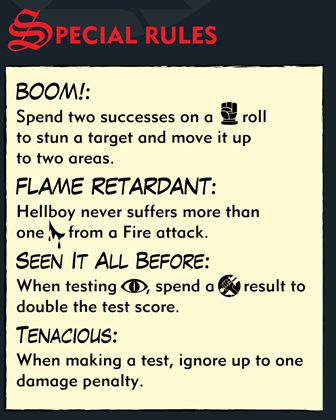 Next up you’ve got the special rules for the agent. These are abilities that are always active for that agent. As you can see from Hellboy’s card, he’s pretty handy (ba-boom, tish) at punching enemies thanks to his Boom! rule. In fact, he can send them flying, which is very handy for moving them out the way or punching them into the path of another agent. It’s also good for hurling them into fire (which Liz can cause) or into furniture to cause more damage.

This is important for the start of the game. Ahead of the mission, you place character icons on the target priority tracker. During the enemy phase, the character in first place will be the target of enemy attacks. Thankfully this changes during the course of the game, so poor Hellboy won’t always be suffering damage. 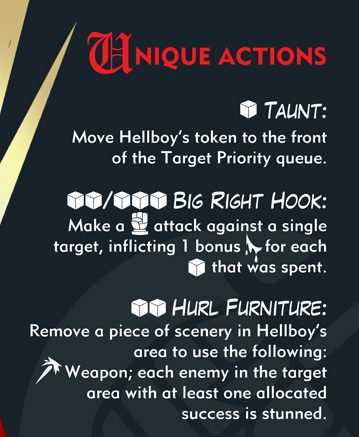 Here’s one of the most exciting elements of the card! These are the Unique Actions the agent can perform as part of their turn. Each costs a differing amount, so you’ll have to choose carefully when you want to perform them. We’ll be going into more depth about Agent Actions in a future blog. For now just imagine how much fun it will be to throw furniture at a frog monster. Answer: lots of fun.

Before a mission you can spend the BPRD budget on equipment to help you successfully complete the scenario. However, agents also start with their own unique pieces of equipment or abilities (for example Liz’s Flame Tracker). In this case it’s a Heavy Pistol and Hellboy’s Coat. A coat may not sound exciting but we’ll explain more in a future entry. It might also be an extremely nice coat!

No one said fighting the harbingers of Doom would be easy and the agents are likely to take damage during the game. If this fills up with damage counters, then they’ll be knocked out.

And that concludes our quick review of Hellboy’s Agent Card. As mentioned above we’ll be exploring some of the elements in closer detail over the next few days. In tomorrow’s blog, the dashing James M. Hewitt will be here to explain what Case Files are… and you definitely don’t want to miss that!