Here’s Negan: The Board Game – what is Reputation?

Today we’re kicking off a series of blogs running through some of the main gameplay elements of Here’s Negan: The Board Game. We’ll be guiding you through how Negan himself works, what events you can expect to uncover, combat and exploration. However, today we’re focusing on one of the key elements in Here’s Negan: Reputation!

Before we go onto how that works, it’s worth explaining a little bit about how Reputation came about. When we started creating Here’s Negan, we originally had Negan as one of the playable characters. However, when it became clear that everyone wanted to be the baseball bat-wielding tyrant, we took development back to the drawing board.

The result was that instead of Negan being a playable character, he was a third party that players had to impress. If you piss off Negan or get in his way, then he’s going to get a little cheesed off and will start punishing the players. Instead, you’ve got to clear a path for him, make sure there are no Walkers in his way and achieve various objectives, which will earn you Reputation.

You track Reputation using a clip at the side of your character’s card. Throughout the course of a game it can go up and down and there are a number of ways to gain Reputation points:

Unfortunately, it’s not all plain sailing for Negan and his gang of trusted lieutenants. Occasionally you’ll actually lose Reputation points during the game. Here’s how you can lose Reputation: 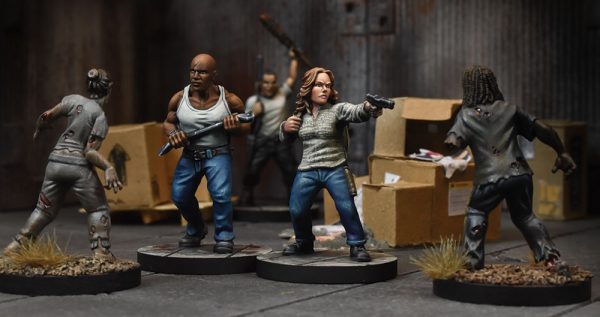 The amount of Reputation you earn as a group will dictate how successfully you clear a mission. Earn only a handful and you’ll get the ‘Practically Dead’ rating. But impress Negan and he’ll say “%$*!#^& Good Job!” However, it’s not really about the team effort because everyone is competing for Negan’s attention and respect. The Survivor with the highest Reputation at the end of the game is declared ‘Top Dog’.

Here’s Negan: The Board Game is available to pre-order now. All pre-orders come with FREE character cards to use Negan’s lieutenants in All Out War.