An introduction to Kings of War: Vanguard

Kings of War: Vanguard will be launching on Kickstarter soon. Throughout this week, we’ll be exploring the game in more detail and giving you a taste of the rules. In today’s blog, we’re looking at the background behind the game.

Mantica is a world ravaged by war, a constant fight for land and resources, or prestige and power. The borders of countries wax and wane like the phases of the moon. The sound of mighty armies marching to war echoes throughout the land.

But wars can be won before the first arrows have been fired, or sword has smashed against sword. Small warbands of hardened warriors clash in desperate struggles to gain the tactical advantage before the battle lines are drawn. These are the bloody skirmishes before the war, where warriors become legends.

That’s the ‘fluffy’ introduction to Vanguard, however, it took us a while to come up with that concept! A Kings of War skirmish game is something that people have been asking for and talking about for a while. The problem was, we didn’t just want to set it in an abandoned city (or similar), as that’s something that’s been covered in numerous other games.

Instead we wanted something that would compliment our existing Kings of War range and also provide a starting point for those looking to start their own Kings of War army. So during a long drive to Belgium last year for Crisis, we began discussing an idea centred round the scouting parties sent out ahead of the main force.

We particularly liked this idea as they’re likely to be some of the most skilled warriors, along with a few supporting troops, rather than the more typical rank and flank. As a result, the warband would contain a grizzled sergeant or veteran captain, alongside specialists like magic users and saboteurs. Their mission would be to scout ahead of the main force in order to capture tactical locations, disrupt supply lines or even take prisoners, etc.

The more we discussed the idea of the scouting parties, the more obvious it became that we could generate some fun scenarios based around this core concept, e.g. objectives might be beacons that need to be lit or you might need to assassinate a key enemy ahead of the main battle. We’re also still thinking of potential scenarios, so if you’ve got some ideas let us know in the comments below! 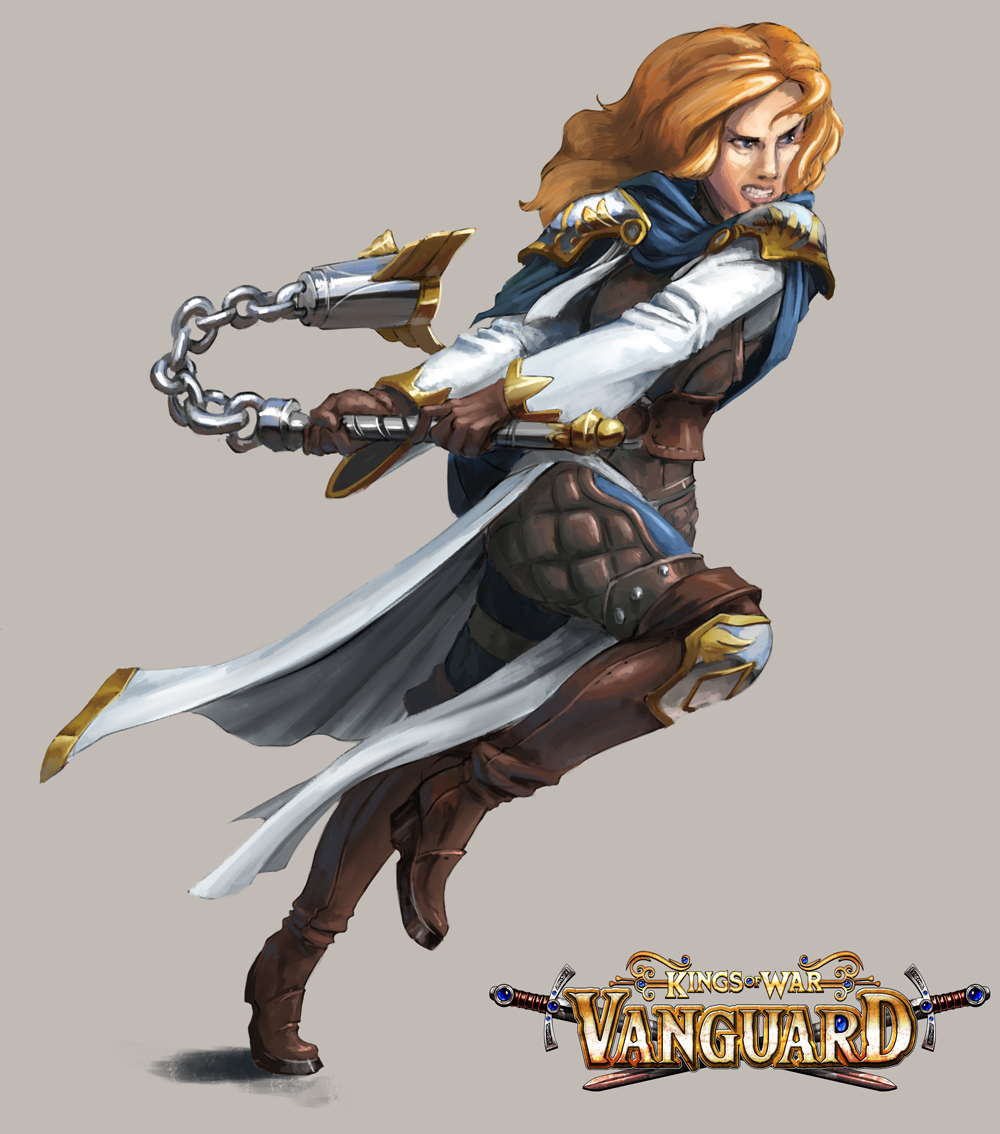 LINKS TO KINGS OF WAR

It was also clear how these battles could feed into larger games of Kings of War too. So if you play a game of Vanguard in which the objective is to light beacons to show the way, in Kings of War you’ll be able to deploy your troops in a more advantageous position. Likewise, the scenarios can go the other way too, so you start with a big battle and then play a game of Vanguard in which you loot the corpses. Of course, Vanguard can be played independently of Kings of War and there will be a full campaign mode that we’ll detail later this week.

Another beauty of setting the game around the scouting parties is it gives a reason for all armies to get involved! It isn’t just a Basilean city that some forces would want to ransack. Instead, as mentioned earlier, Mantica is a little like medieval Europe with battles happening almost constantly. This means there’s always going to be a reason to send out those warbands for a bloody good scrap!

What’s more, we were conscious that a lot of people have multi-based their armies for KoW so the warbands idea is perfect because it focuses on individuals. These can then become the heroes/unit champions in your Kings of War armies too and, because the poses/sculpts will be extremely dynamic, they’ll add plenty of character to your army. There will be a small number of troops used in Vanguard, however these will be optional.

On that note, it’s worth mentioning that Vanguard will use square bases. Again, we wanted to make sure that Vanguard miniatures could easily crossover into Kings of War or even Dungeon Saga, so it made sense to have them on the same bases. It also makes it much easier for rules such as attacking miniatures from behind, as there’s a clear facing with a square base.

In the next blog, we’ll be taking a closer look at the Vanguard stat cards and what they mean for your character.