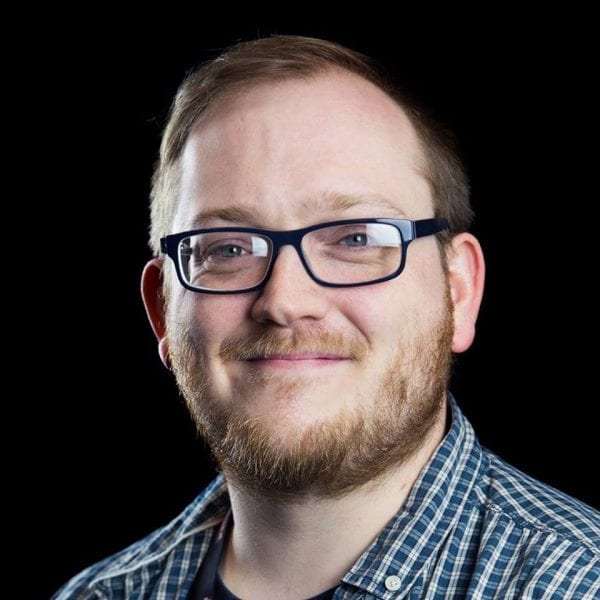 We are pleased to announce that our upcoming Hellboy board game – based upon the visionary comic book series by Mike Mignola – will be designed by well known tabletop games designer James M. Hewitt. With a wealth of high profile titles already under his belt, James will ensure the Hellboy board game lives up to the world famous source material.

The Hellboy board game will be a co-operative experience in which players face off against some of the comic’s most famous foes. Up to four people take control of iconic BPRD members, such as Hellboy, Abe Sapien and Liz Sherman, before exploring gothic locations and uncovering ancient artifacts.

After previously working at Mantic Games and Games Workshop, James now heads up the games design studio Needy Cat Games. In the past he has developed hugely popular titles, such as DreadBall, Necromunda 2017, Blood Bowl 2016, Warhammer Quest: Silver Tower and Horus Heresy: Betrayal at Calth.

“We wanted a talented games designer who could create a fun, co-operative board game that incorporates the atmosphere and drama of the comics,” said Ronnie Renton, Mantic Games CEO. “James has a wealth of experience making a diverse range of titles and he’s most certainly the man for the job.”

“This is – forgive the pun – one hell of a license to work with,” added James. “The thought of sinking my teeth into the BPRD’s adventures and reimagining them for the tabletop… well, that sounds more fun than a monkey with a gun. This is a great chance to make a narrative-led game that mixes big, loud action with a wry sense of humour. I can’t wait!”

The Hellboy board game will be launching on Kickstarter in April 2018. Make sure you sign up to the Mantic Games newsletter at www.manticgames.com for the latest developments.

In the nine years since launch, Mantic Games has released several complete tabletop gaming systems including Kings of War®, DeadZone®, Mars Attacks® and DreadBall™. The team’s obsession for making detailed miniatures, simple but challenging games and great value-for-money products has seen Mantic become a global presence in the tabletop gaming arena. Mantic Games has a strong relationship with its community, and crowd funding has raised extra development money for recent product launches – allowing bigger ranges in plastic for the retail launch. To date, backers have pledged more than $5m to help new projects come to life, making Mantic one of Europe’s most funded companies on Kickstarter. Mantic has sales offices in the USA and UK, supplies 20 countries, has a complete design studio team, a global supply chain with production facilities based in Nottingham, England. To find out more, please visit www.manticgames.com

For more than thirty years, Dark Horse Comics has proven to be a solid example of how integrity and innovation can help broaden a unique storytelling medium and establish a small, homegrown company as an industry giant. Founded in 1986 by Mike Richardson, the company is known for the progressive and creator-friendly atmosphere it provides for writers and artists. In addition to publishing comics from top talent, such as Eric Powell, Mike Mignola, Geof Darrow, Brian Wood, Gail Simone, Stan Sakai, and Guillermo del Toro, and comics legends, such as Will Eisner, Milo Manara, Kazuo Koike, Neil Gaiman, and Frank Miller, Dark Horse has developed its own successful properties, such as The Mask, Ghost, X, and Barb Wire. Its successful line of comics, manga, and products based on popular properties includes Dragon Age, Buffy the Vampire Slayer, Aliens, Conan, Tomb Raider, The Legend of Zelda, Halo, The Witcher, Game of Thrones, and Avatar: The Last Airbender. Today, Dark Horse Comics is the largest independent comic book publisher in the US and is recognized as one of the world’s leading entertainment publishers.