For our final monster blog this week, we go through the design and creation of the Winged Slasher, and why sometimes, you need a bigger base… 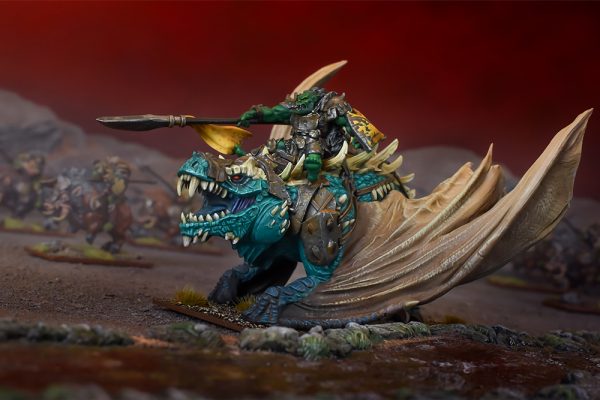 The only thing worse than an Orc Krudger is one mounted on an equally ill-tempered reptile. The Slasher is a winged terror and an idol of destruction to the Orc hordes, but  it can also be found flightless,in service to the Goblins. 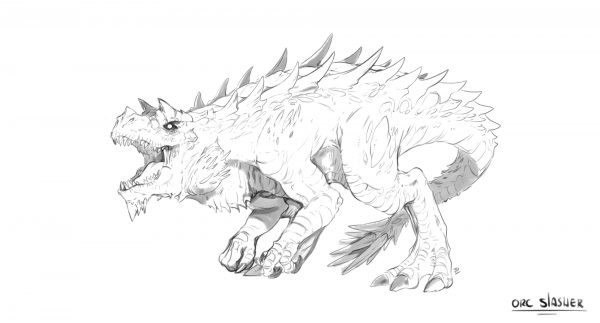 The Slasher had a tall order to fill, design-wise. In appearance, Slashers are basically Wyverns – winged reptiles that have been captured and led into battle by the Orcs and Goblins. So, we started with this concept to design the creature.

However, while the initial miniature would just be for the Orc Krudger, we had to future proof the design for further releases too. This meant creating a creature that could be built with or without wings, be mounted by a hero and have the option to carry a goblin howdah or warmachine.
The pose and overall design was restricted by the multi-purpose nature of the miniature. Because there will eventually be a howdah variant, the creature would need to be low to the ground, with a level back – no rearing up (otherwise those poor goblins would fall off). The riders and the planned design for these would also dictate the size of the miniature, which brings me onto a touchy subject – basing. 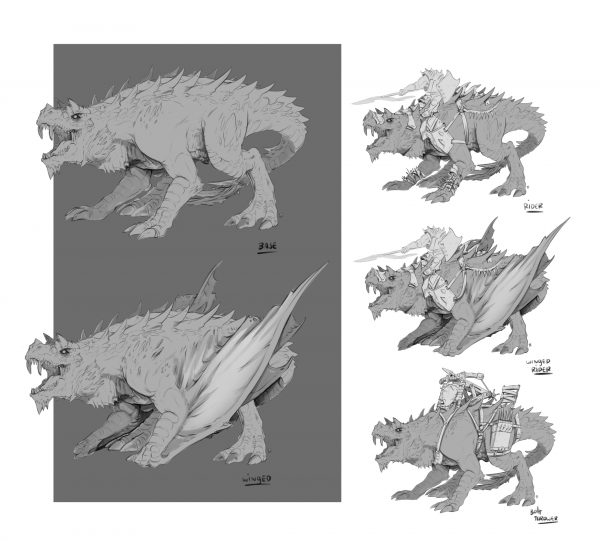 With all the design considerations in mind, it meant that we seriously had to think about the size of the base the Slasher would come on. In the Kings of War rulebook monsters are listed with a standard base size of 50mm… although that doesn’t mean they can onlycome on a 50mm base.
When we originally started producing monsters for Kings of War, we were restricted on the base size by the type of models we could produce. These were mainly metal so anything bigger than something like the Berserker Lord on Brock would have probably required a small crane to move around the battlefield. Of course, we could have sculpted the Slasher in a reared-up position, like the Brock, but just think about all those poor goblins falling off the howdah #goblinsadface.

The opening of our in-house resin department means that we can now create very big and incredible cool-looking monsters that don’t require a trip to your local crane hire each time you want to play a game, and fit a better design brief. In the case of the Slasher, this has meant it comes on a chariot size base (50mm x 100mm) but it looks frickin’ cool and is future proofed for alternate versions with a howdah or warmachine. 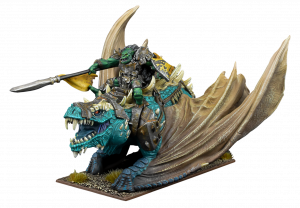 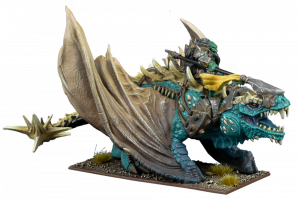 As we create more monsters for Kings of War, the bases will be looked at in each case. Some, like the Greater Water Elemental or Chroneas don’t pose a problem because of… well… their pose. But where something just simply wouldn’t be possible we’ll review the standard base size and amend it accordingly. What’s more, with the annual releases of Clash of Kings we can review base sizes on a model-by-model basis. So, for once, it’s not all about that base.

If your Orc horde needs a powerful Warlord on his own destructive mount, the Orc Krudger on Winged Slasher is out now! Order yours here!