It’s that time again folks! We’re back for another instalment detailing the ins and outs of your new favourite fantasy skirmish game, Kings of War: Vanguard. In our previous blog we introduced combat and quickly ran through the basics. In today’s blog, we’re going to go through some of the extra things to consider when you’re charging headfirst into a scrap or launching a desperate last shot from your bow.

ALL ABOUT THE BASE

Let’s start with rear and front arcs, which also requires a little chat about bases. Vanguard uses (mostly) the same size bases as Kings of War, e.g. small units come on a 20mm square base, cavalry on a 25mm x 50mm, large infantry on a 40mm, etc. Now, we realise that a large portion of skirmish games use circular basis, so this might seem a little unusual.

However, just remember for a moment that one of the key design philosophies behind Vanguard is that the miniatures work in both Vanguard and Kings of War. Obviously, this means that they had to use the same bases, so your Goblin Wiz can be used as part of your warband AND your KoW army. Having some on circular bases and others on square bases simply wouldn’t be cricket*.

“But what about my multibased units?!” Screams our imaginary blog reader at the screen. Fear not friend. A lot of the models in Vanguard tend to be the Hero units from Kings of War, so they’ll easily cross over. However, if you want to add some more Grunts to your warband – which do tend to be the troops in KoW – then there are a range of sprues available on the website, so you can just pick up the units you need without having to buy an entire regiment box. Of course, with the Preferred Model Count (PMC) in Kings of War, it’s often likely you’ll have a few spare because you don’t need to put the full amount on the unit.

Anyway – going back to our original point about arcs – having square bases does make it extremely easy to tell what attacks are in the front and what are in the rear. As you can see in the diagram below, anything behind the back line of the base is considered to be in the rear. 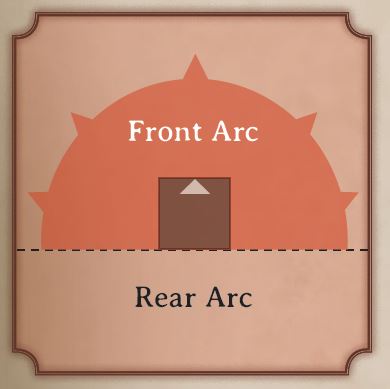 In combat, if you make a ranged or close combat attack in the rear arc the attacking model gains/or increases their attack by Piercing (1) or Crushing Strength (1). What’s more, if a model has the Sneaky ability, instead of just having the normal exploding 8s, their dice will explode on 7s too. As such, it definitely pays to make a note of where the enemy is when positioning your model.

NEVER TOO LATE TO RETALIATE

Another design philosophy we had in mind when creating Vanguard is that we always wanted both players to feel like they were part of the action – instead of just sitting back and watching as their models get ripped to bits!

This led to us adding the option to Retaliate when being attacked in close combat. A model that has been attacked in a Melee, and has survived, has the opportunity to Retaliate and attack back. This must be declared after the attack is resolved. A model that is Knocked-down or that is already both Activated and Fatigued cannot Retaliate.

After declaring the model wants to Retaliate, it is turned so the target is in its front arc. The attack is resolved as normal, then the player must check the following conditions and ONLY use the first that applies:

It is important you only apply one of the above conditions and not both. The reason for this is that if a model is Fatigued but not Activated, it can still Activate in its own Turn and perform one short action – which could potentially be a melee attack or walk (if it isn’t still engaged).

If the model was already Fatigued when it Retaliated it is marked as Activated AND Fatigued, which means it cannot do anything else for the rest of that Round. We wanted to make sure that models were marked as Fatigued first, rather than activated, so that they were still able to perform a short action during the Round. Otherwise if a model was immediately marked as Activated after they had Retaliated they could play no further part in the Round, unless the player spent a power to Force Fatigue the model. Read about Forge Fatigue here.

Of course, you’ve still got to be careful when choosing the correct moment to Retaliate. Perform it too early in the Round and you’ll limit your actions by being Fatigued. But leave it too late and you may be overwhelmed by the enemy.

YOU’VE GOT A NERVE

Finally, we wanted to quickly cover Nerve tests. In yesterday’s blog we mentioned that Nerve tests are used to see if a model survives a particularly vicious attack. However, Nerve is also used as a measure of your warband’s overall morale. Seeing your best mate explode in a fireball or watching as your commander is ripped apart by a marauding Direfang is likely to cause some serious mental issues.

If you have less than half of your warband left at the start of a Round, then your Warband Morale is broken. This means that before a model can be activated they must take a Nerve test. Pass the test and they can activate as normal. But if they fail, the model will immediately Fallback, i.e. it will Run towards its own table edge and is then marked as activated. Falling back can obviously scupper your plans and we’ve had some occasions when a model has run away from an objective because it failed a Nerve test.

While we’re on the subject of Nerve tests – some units, particularly those in the Nightstalker faction can prey on the Nerve of their enemies. Take a look at the Shade card below. By using the Cause Fear ability, it can actually Fatigue its foes… which is particularly powerful when you want to stop them Retaliating, as we’ve already discussed. 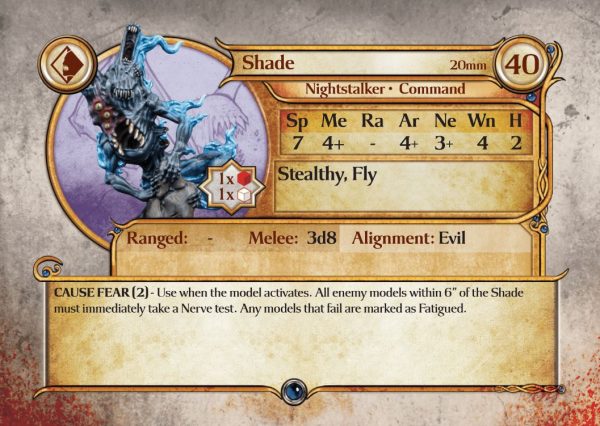 YOU CAN READ MORE ABOUT COMBAT IN THE FREE VANGUARD RULEBOOK, WHICH CAN BE DOWNLOADED HERE  – OR JUST USE THE LINKS BELOW.

Buy now
×
Select your currency
GBP Pound sterling
USDUnited States (US) dollar
EUR Euro
This website uses cookies to ensure a user-friendly experience and for key pieces of functionality. By continuing to browse this website, you declare to accept the use of cookies.Accept
s